Can rock bottom Rochdale find a way past Fleetwood? Find out with our Fleetwood vs Rochdale match preview with free tips, predictions and odds mentioned along the way.

A trio of tips for Fleetwood vs Rochdale

Rochdale to blank and Fleetwood to win

Fleetwood have won five of their last 10 matches with each of their four past victories coming to nil. For that, they can thank their solid defence. That defence should have things reasonably comfortable against the league's bottom side given Rochdale have failed to score in seven of their last 10 outings and couldn't even manage a shot on target against Ipswich on Monday. All that remains is whether Fleetwood can score; they have lost their last two home games without notching but one of them was too high flying Peterborough; they've since recorded a victory over Wimbledon too. We expect them to have enough here.

It won't be a high scoring encounter

The second of our three top tips is one that's pretty easily explained; Fleetwood boasts a defensive record that can only be beaten by league leaders Hull. Of their last 10 games, only one of them has seen over 2.5 goals. For Rochdale seven of their last 10 results have been under the mark of three goals. It's hard to see this game being too much of an exciting watch.

This #GetAPrice prediction might not come as a huge surprise given the explanation we've already touched on in our other tips. By combining various elements – along with having the protection of Fleetwood drawing – you can receive handsome odds. Rochdale have been near non-existent as an attacking threat in the past 10; with Fleetwood solid at the back and hardly free-flowing in attack, the under 3.5 goals should be safe. That should also be true of Rochdale to blank in the first half. Given that Rochdale have just one win in their last 10 the double chance on Fleetwood or draw should be easy pickings.

The stats you need for Fleetwood vs Rochdale

Rochdale to stay rooted to bottom

Rochdale fans shouldn't tune into this game expecting too much. Their last match was an utter snooze fest as neither they nor their visitors, Ipswich, managed a single shot on target. Throw in the fact Fleetwood have one of the best defences in the division and it doesn't bode well as an attacking spectacle. Fleetwood are guaranteed a midtable finish but will be looking to add to their points tally here.

Swot up on all things Fleetwood vs Rochdale 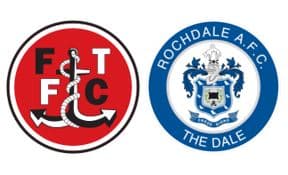