Since both Fleetwood and Crewe are safely tucked in the middle of the League One standings, we don't expect to see a lot of excitement in their duel. Still, we have prepared a preview of this match and some free betting tips for you.

Predictions and top free tips for Fleetwood vs Crewe

The match between Fleetwood and Crewe is one of the most difficult to predict. With that in mind, we offer you a few of our betting tips and predictions for this game.

Odds are subject to change, so check the odds with your bookmaker before placing a bet. Our recommended bookmaker for this game is Ladbrokes.

Fleetwood and Crewe to Draw

This is one of the toughest matches in this round of League One to offer a prediction since both teams are without a true motive since they don't have any chance of moving up or down. So, we've decided to go with a draw since that often happens when teams don't have a reason to push forward. Furthermore, the first meeting this season between Fleetwood and Crewe ended in a 1-1 draw.

The recent h2h meetings between these two teams support our prediction since all five of their latest duels have gone under 2.5 total goals. That rarely happens, and it is indicative of a trend in matches between these teams. In addition to this, Fleetwood concedes only 0.67 goals per match at home, while scoring 1.13. Also, Crewe scores less than a goal per match in away games.

While we don't expect to see many goals, Fleetwood is more likely to score a goal than Crewe in this game. And if that happens, the smartest bet on goalscorer in the match is to back the team's top scorer this season, Callum Camps. The striker has found the net 9 times this season and he might add another one in this game.

The best stats and odds for Fleetwood vs Crewe

If you are looking for the best odds for Fleetwood vs Crewe, you've come to the right place. We have compiled odds from a few top UK bookies right here:

Fleetwood vs Crewe preview: A relaxing game for both teams

With 56 points, which is one more than their upcoming rivals, Fleetwood is positioned in 14th place in League One, far away from any relegation worries and too far from a playoff spot. So, the remaining league games will probably feel like friendly games for them. In the last five games, The Cod Army has lost three times and won twice, so they are pretty inconsistent and unpredictable. Holgate, Mulgrew, and Whelan are questionable for the match against Crewe due to injuries.

The guests are pretty much in the same boat as the home team since they are unlikely to move up or down by much. That being said, they are in a pretty bad form at the moment with three losses in the last five games, including an embarrassing 6-0 loss to Oxford at home a few games back. However, they've managed to get a draw against Portsmouth in that same time span. The team is also struggling with injuries since Wintle, Powell, Adebisi, Finney, and Lundstram are all out or questionable right now. 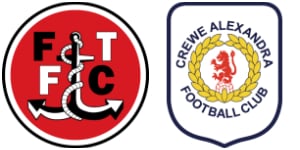