With his contract set to expire at the end of the season, Michael Carrick’s Manchester United future remains uncertain.

As he did last term, it is highly possible that the former Tottenham Hotspur man will sign another one-year extension, stretching his Old Trafford stay into its 12th season.

But, at 35, finding a long-term replacement for Carrick is one of the most important tasks that United manager Jose Mourinho faces in the near future.

Having been utilised predominantly in EFL Cup and Europa League fixtures at the start of the current campaign, Carrick was brought into the Premier League line-up on a regular basis in November, and immediately improved the Red Devils’ fortunes.

His inclusion coincided with £89million record signing Paul Pogba finding his best form, while the dynamic Ander Herrera was freed up to cover every blade of grass, as is his wont, in a box-to-box role.

Indeed, the former England playmaker has yet to taste defeat in league action this term.

But he can’t go on forever, and Mourinho has already admitted that the 35-year-old is no longer capable of playing multiple games in a single week.

So it is likely that United will take to the transfer market to seek an heir to Carrick’s throne at the base of Mourinho’s midfield.

It won’t be an easy feat, but here are five players who could potentially fill the veteran midfielder’s boots at Old Trafford. 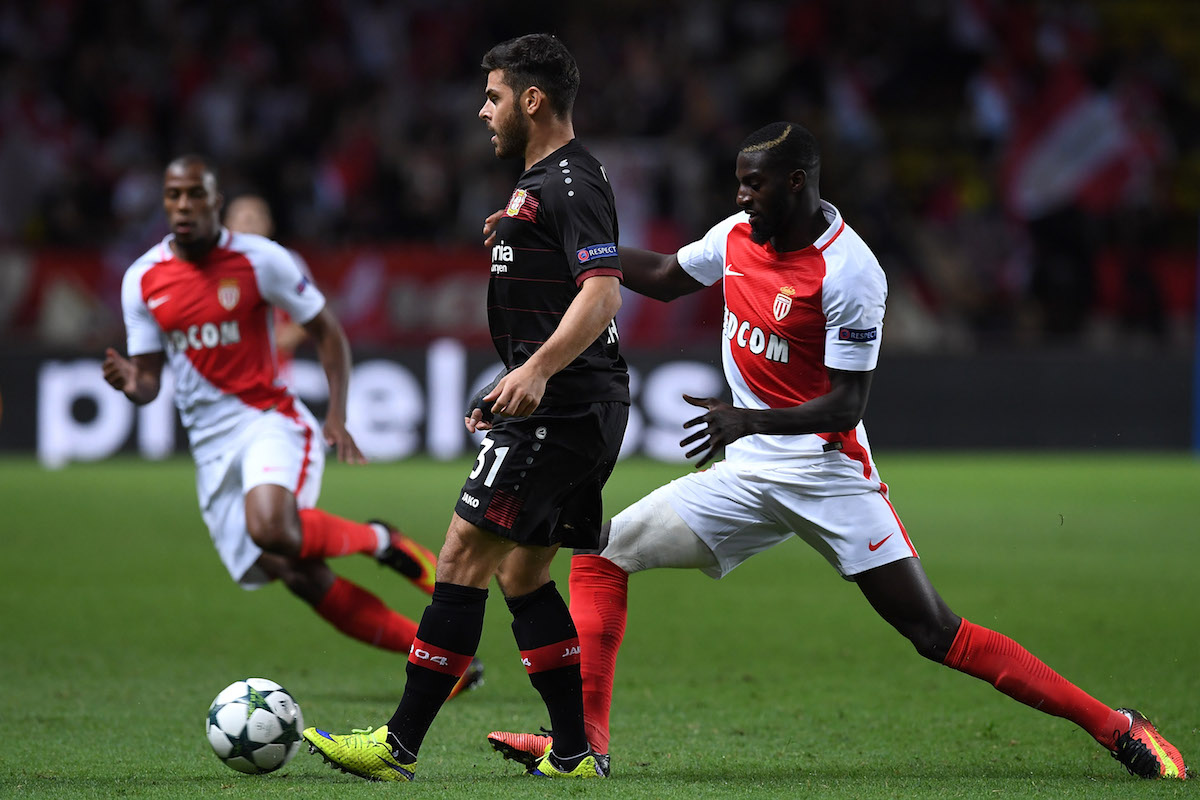 Reportedly a target for both United and Chelsea, Monaco midfielder Tiemoue Bakayoko has added fuel to speculation surrounding his future this week by stalling over contract talks with the Principality club.

The 22-year-old Frenchman has been hugely impressive partnering Fabinho – another reported United target – at the heart of Monaco’s midfield this season. With his physicality, defensive instincts and accurate forward passing ability, Bakayoko is the full package as a deep-lying central midfielder.

Likened to former Monaco man Yaya Toure, Bakayoko is perhaps not as creative as the Manchester City star, but demonstrates a greater degree of tactical discipline.

Mourinho has tended to deploy an athletic, defence-first style anchor at the base of his midfields in the past: Costinha did that job for him at Porto; Claude Makelele and Nemanja Matic covered that role through his two Chelsea spells; Estaban Cambiasso excelled there for Inter Milan; and Lassana Diarra did it for Real Madrid.

But the success he has had with Carrick – more of a deep-lying playmaker than a simple destroyer – might have convinced Mourinho that he needs a pass master in that position from now on.

Bakayoko would represent a perfect reconciliation of both ideas. Adept at shielding the back four and breaking up opposition attacks, the former Rennes youngster is also able to instigate offensive manoeuvres from deep.

His 87.6 per cent pass accuracy is a notch below Carrick’s (90.1 per cent), though still more than respectable, while he also averages marginally more key passes per game (0.4) than the Englishman (0.3).

Defensively, his average of 2.5 tackles per game, compared to Carrick’s 1.2, shows his willingness to engage physically, while there is little to separate the amount of interceptions each man makes per outing (2.2 and 2.3 respectively). 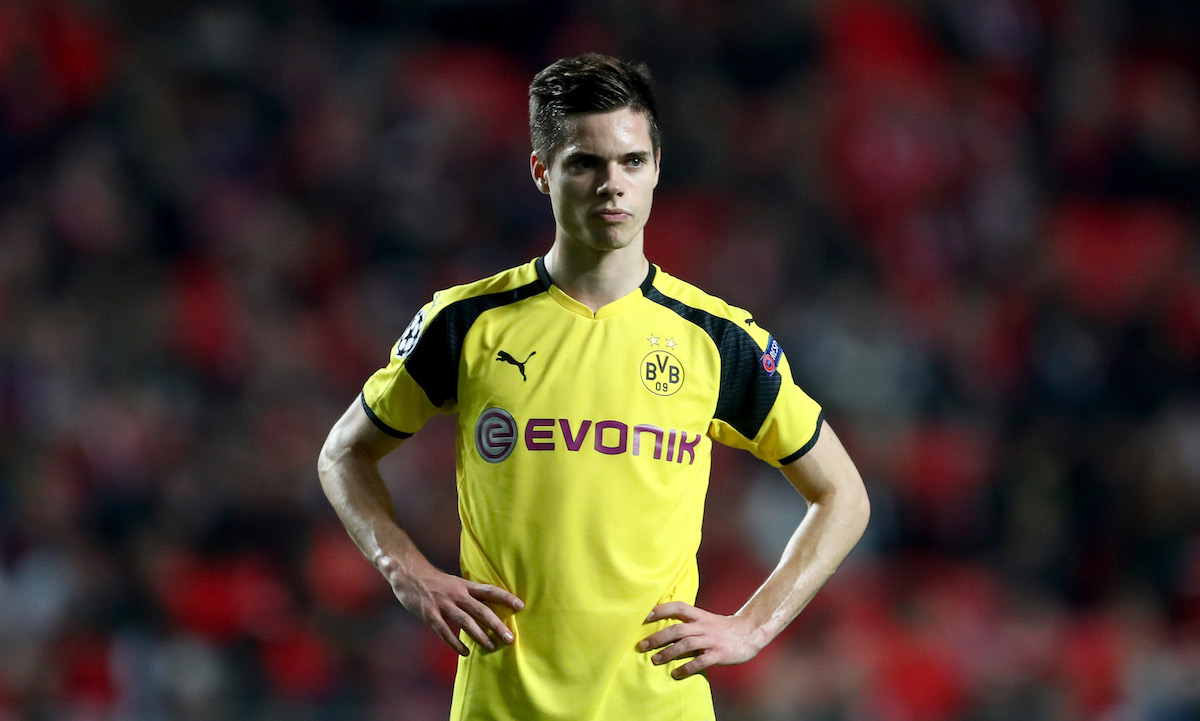 Much more in the mould of a Carrick-style playmaker – or pivote, as it’s known in Spain – Julian Weigl has been earning rave reviews for his performances for Borussia Dortmund since moving from 1860 Munich in the summer of 2015.

Despite still being just 21 years old, Weigl consistently shows incredible maturity, untroubled by being trusted with conducting the play for Thomas Tuchel’s men.

Sitting in front of the back four in BVB’s 4-1-4-1 shape, the young German international is positionally aware and responsible when it comes to carrying out his defensive duties, always placing himself in the optimum area to thwart on-coming attackers.

But where Weigl really comes into his own is with the ball at his feet. Rarely a direct threat to the opposition’s goal – indeed, he has only scored once in his senor career – the Dortmund star moves his team-mates into dangerous zones with precise, perfectly-time vertical passes.

Despite always looking to play the ball forwards, he has managed to maintain an incredible pass accuracy of 90.6 per cent in the Bundesliga this term – a figure which rises to a remarkable 92.5 per cent in the Champions League.

Likened to Barcelona superstar Sergio Busquets, Weigl is believed to be a top target for Manchester City boss Pep Guardiola, with Real Madrid also thought to be monitoring the gifted midfielder. 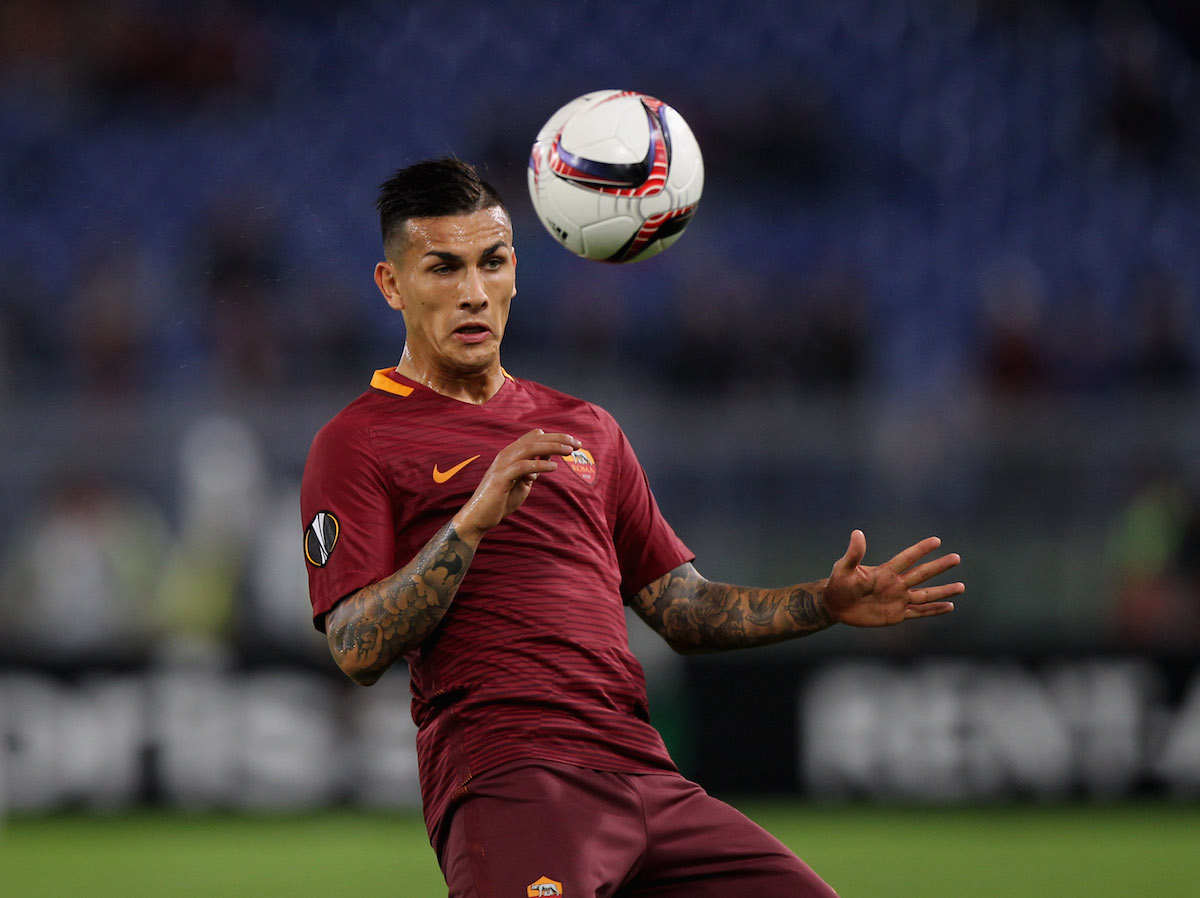 If that is that case, then Mourinho should strongly consider making a move for the €25million-rated Argentinian.

The 22-year-old was loaned to Empoli to gain experience last season. He was hugely impressive with the Tuscan outfit, catching the eye with his stunning range of passing and ability to play the ball accurately with either foot.

Upon returning to his parent club this term, Paredes has struggled to nail down a regular starting berth due to the presence of more experienced central midfielders in the shape of Radja Nainggolan and a fit-again Kevin Strootman.

Although he is able to operate in a slightly more advanced position, Paredes is tailor made for the regista – deep-lying playmaker – role. Athletic and mobile, he is able to cover ground quickly and efficiently, while his near-perfect technique allows him to thread forward passes through the eye of a needle, as well as making him a threat from free-kicks.

Paredes' pass accuracy of 88.9 per cent in league action so far this season is highly impressive, but perhaps even more striking is his willingness to get on the ball and instigate attacks from deep, evidenced by that fact that he averages a staggering 79 passes per 90 minutes compared to Carrick’s 73.4, and 2.5 key passes per 90 minutes to the United man’s 0.3. 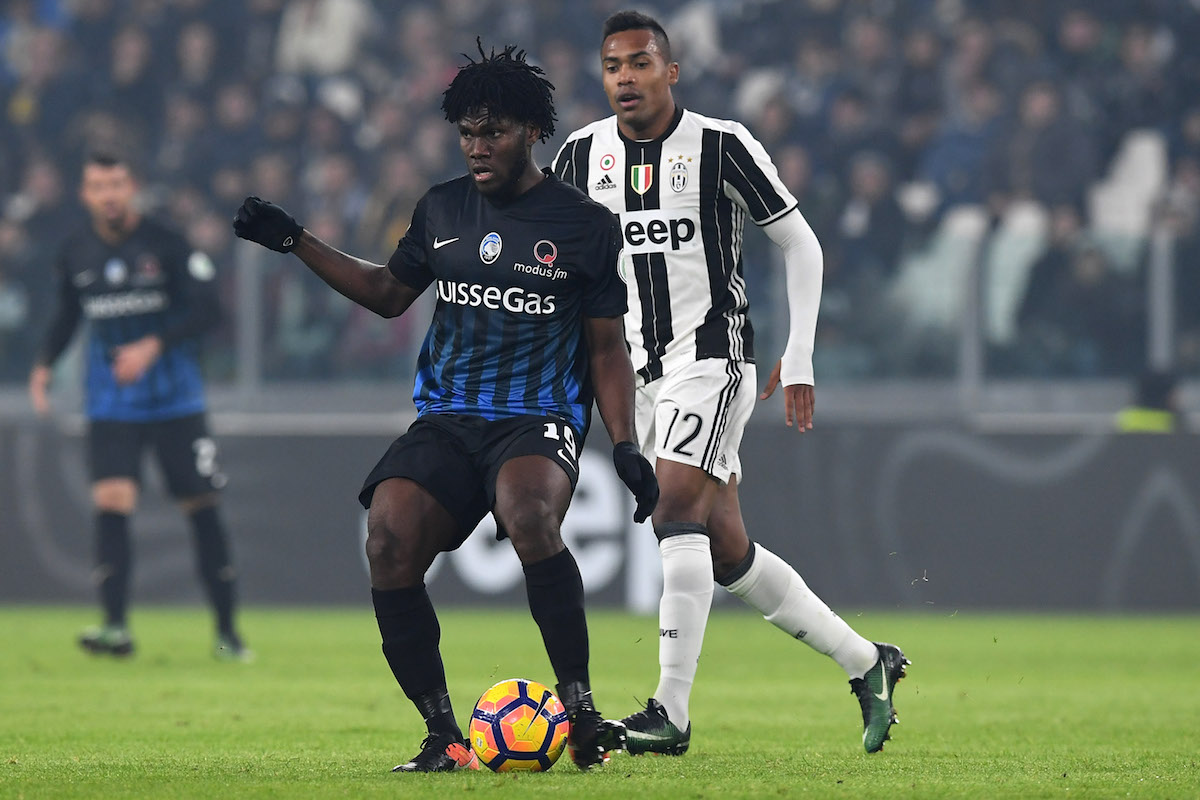 Atalanta midfielder Franck Kessie has been one of breakout stars of Serie A this season, helping La Dea rise to the lofty heights of fifth in the table.

Athletic, physically strong and technically refined, Kessie is able to control a midfield despite still being just 20 years old.

At 6ft tall and quick across the ground, Kessie would be well suited to the pace and physical demands of Premier League football. Hotly tipped to make a big money away from the Stadio Atleti Azzurri d'Italia in the summer, Atalanta have already reportedly turned down a €25million offer for his services from Chelsea, while Roma are also thought to be readying a bid.

With six goals and one assist to his name so far this season, Kessie has thrived in a box-to-box role within Gian Piero Gasperini’s high-flying side. But his maturity and tactical discipline could conceivably see him moulded into a top class holding midfielder. 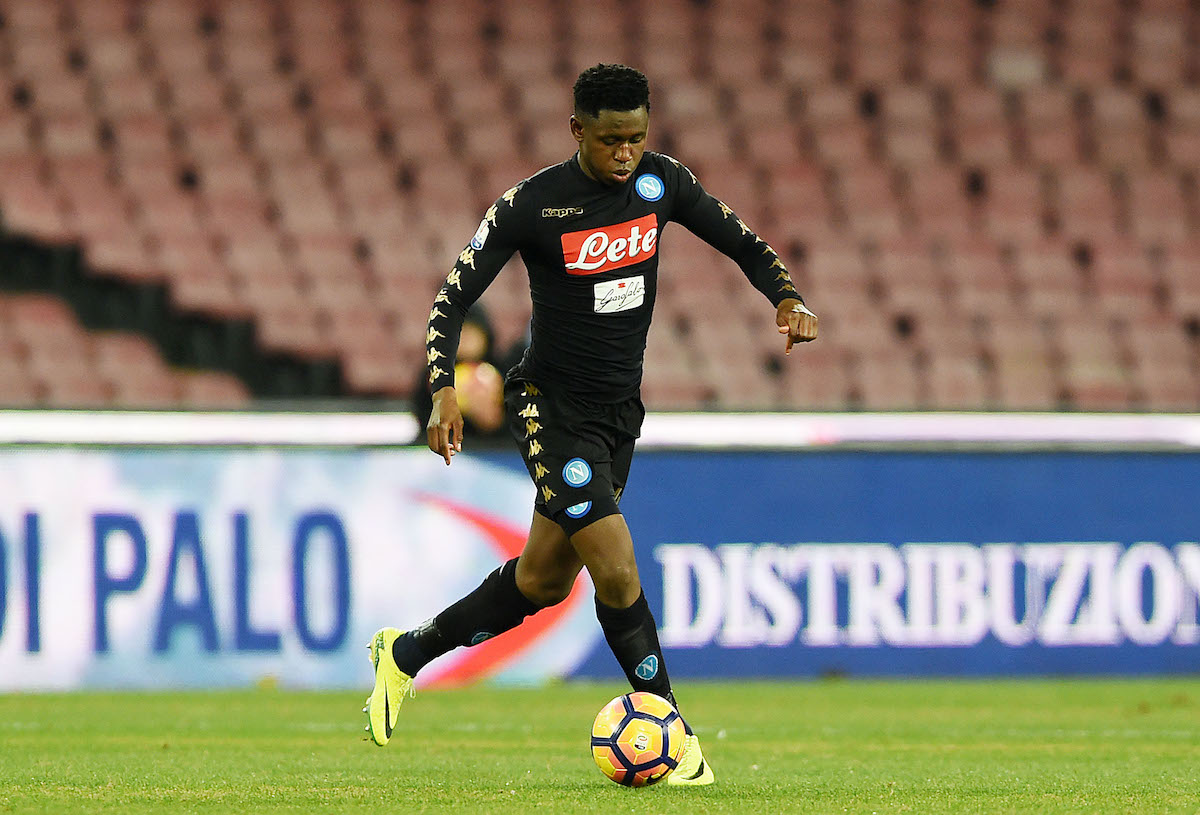 Teenage Napoli midfielder Amadou Diawara is much closer in style to the kind of defensive midfielders Mourinho has favoured throughout his career than anything akin to a Michael Carrick-esque regista, although that isn’t to downplay his technical gifts.

Still only 19, Diawara joined Napoli from Bologna last summer and has become a trusted member of Maurizio Sarri’s squad, sharing the midfield anchoring duties with Jorginho.

With his accurate short passing game, the 6ft tall Guinean is responsible in possession, picking out a colleague with 89.8 per cent of his passes in Serie A this term.

Perhaps Diawara’s most impressive attribute is his calmness with and without the ball, never flustered and maintaining absolute concentration at all times.

Operating within one of Serie A’s best passing units, he is required to carry out evasive action less often than some of his peers. But his positioning sense means that he is always well placed to nick the ball – he makes an average of 1.8 tackles and 1.6 interceptions per game — and immediately looks to find one of the Partenopei’s more creative players.

The youngster has also shown his willingness to take responsibility for dictating play from deep by making an average of 81.2 passes per 90 minutes in Serie A this season, more than Carrick’s tally of 73.4.

Is it time for Jose Mourinho to give Zlatan Ibrahimovic a rest?