This felt like a very significant weekend in Ligue 1 as far as the race for UEFA Champions League places are concerned. The chasing pack all dropped points and the top three all managed to keep their distance.

The positions are far from decided, but it’s going to be very hard for the peloton to find a way back to the league leaders.

Leonardo Jardim’s Monaco were the big winners this weekend. They beat Metz 7-0 in the reverse fixture and goalkeeper Thomas Didillion will be sick of the sight of them.

Radamel Falcao’s knock-down set up Kylian Mbappé for his first, which the youngster dispatched beautifully with his left-foot.

The Colombian then made it 2-0, converting Djibril Sidibé’s low cross from the right. The away side obviously hadn’t learned their lesson and after 20 minutes it was 3-0. Mbappé was released free down the left, he cut inside and finished with his right-foot,

Just 18 years old, Mbappé would score his first Ligue 1 hat-trick minutes after the restart. Great work from Brazilian Boschilia slipped the French forward in, he added the delicate prod past Didillion for his seventh goal of the league campaign.

Mbappé was used sparingly by Jardim at the start of the season, now, with just eight starts, he has five assists to add to his eight strikes. He is easily one of the hottest prospects in Europe. No surprise he is a summer transfer target for Arsenal.

Falcao converted Benjamin Mendy’s cross on the 55th minute to make it 5-0 and then Monaco applied the mercy rule and left Metz alone.

One huge blow for the home side was an injury to Boschilia, after six goals and two assists in just 11 appearances, he went down with a knee injury and it looks like he ruptured his knee ligaments.

“We played well in the first half and created lots of chances,” Jardim commented on Saturday. “In the second half we made a few changes. But the difficult thing about tonight is the injury to Gabriel (Boschilia). It is a serious injury. I would have preferred to win 1-0 and keep Gabriel.” 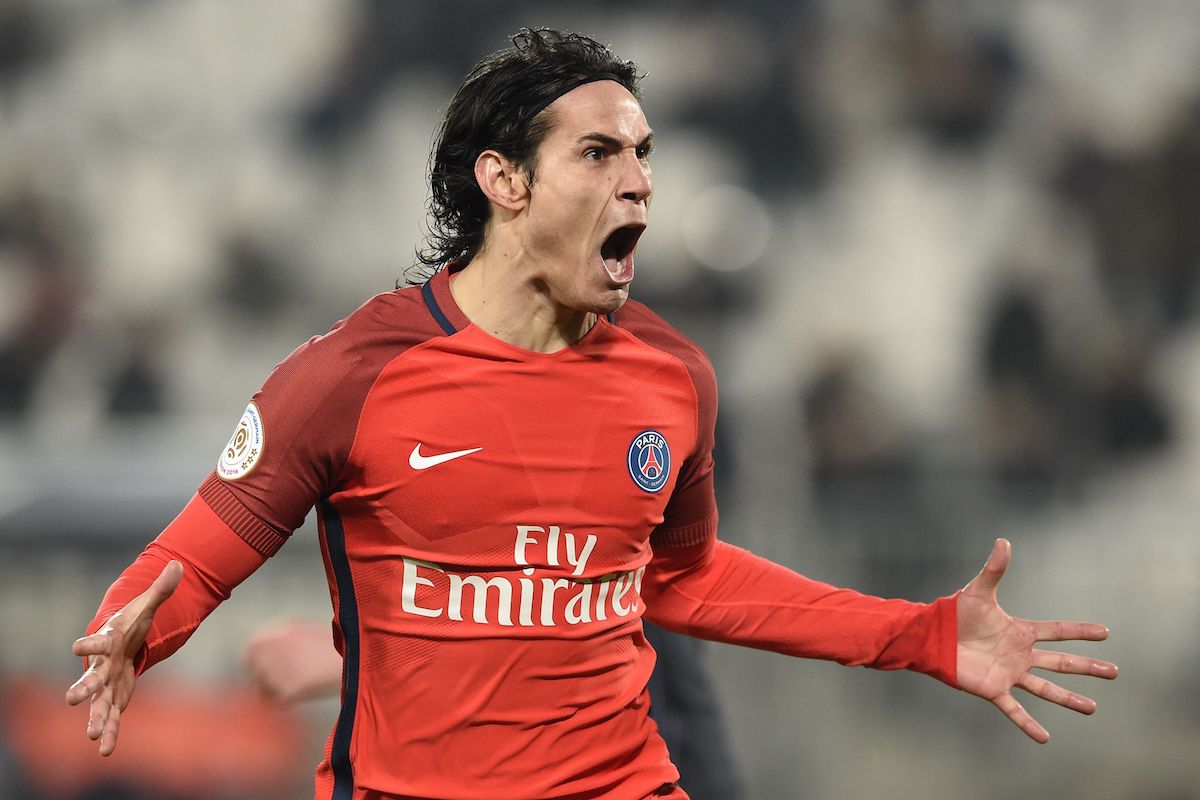 Cedric Carrasso should probably have done better with the first goal, Cavani’s technique was excellent, but the goalkeeper was beaten at his near post.

There was a hint of offside for the Argentine’s goal before half-time. Di Maria running on to a lovely pass from Marco Verratti, but there were no doubts over the third.

A magnificent ball from the left-wing by Di Maria found Cavani unmarked in the penalty area and the Uruguayan smashed in his 25th league goal.

Perfect build up for PSG before their clash with Barcelona in the Champions League. For all his goals, failure to score against the Spanish giants and help the Parisians challenge Luis Enrique’s side and the doubts will remain over his quality at the highest level.

Lucien Favre’s side were the only team out of the top three sides not to win this weekend, but after going 2-0 down away at Rennes, it could have been much worse.

Morgan Amalfitano ghosted into the box after seven minutes to lob Yoan Cardinale and make it 1-0. Then 14 minutes later, Giovanni Sio converted a rebound to put the home side two up. Nice’s tasked looked much worse when top scorer Alassane Pléa had to come off injured before half-time.

Nice fought back and substitute Anastasios Donis, played in by Valentin Eysseric, scored his first of the season to get the away side back into the game.

Eysseric then turned goal-scorer. A lovely ball over the top from Jean Michel Seri caught out the Rennes back line and the midfield raced in to squeeze in the equaliser and save Nice’s blushes.

Monaco lead the title race on 58 points, three ahead of champions PSG and Nice are now two points behind the Parisians, but 13 points clear of their nearest rival from below.

READ MORE: THE REASONS BEHIND AS MONACO'S AMAZING SEASON

Even an apparent tantrum from Mario Balotelli won’t have Nice too worried, especially after Lyon blew a 1-0 lead of Guingamp on Saturday.

Excellent link-up play between Alexandre Lacazette and Jeremy Morel set up the French striker to fire the away side into the lead – his 20th goal of the season – but then the defence fell apart.

Morel’s assist was the best thing the left-back did all game and he was badly caught out of position for both Guingamp goals. 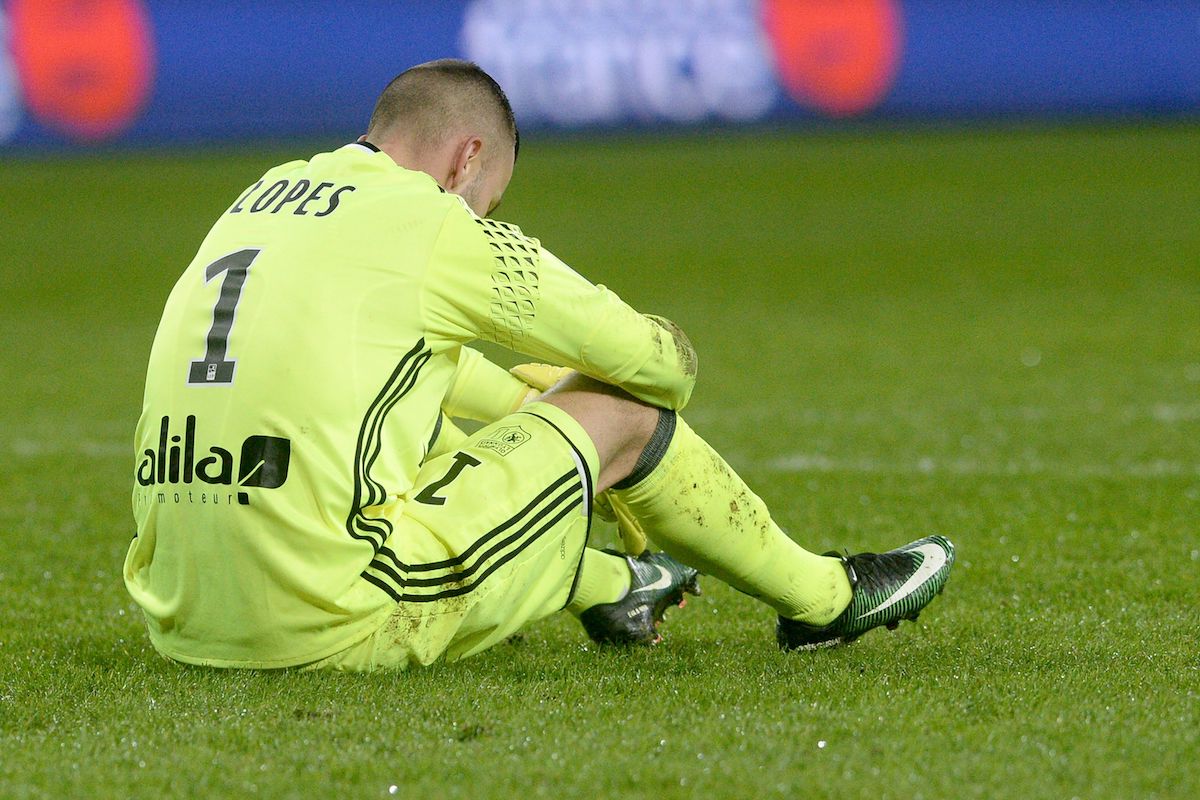 Moustapha Diallo was left unmarked at the back post on the half hour mark as Guingamp hit on the counter. Nicolas Benezet picked him out and the midfielder brought the game level.

Then, after his failed move to Hull City, Yannis Salibur got back to business, taking advantage of more poor defending to pick up Benezet in the six-yard-box, the former Evian man glancing his header past Anthony Lopes.

Despite having 64 per cent possession and double the shots on goal as the home team, Lyon couldn’t find the net and they have now lost four from their last six.

Out of both cups and out of form, the pressure of Bruno Genesio is building, failure to finish in fourth, or even worse, behind Saint-Étienne, would be a disaster for OL. Coaches have been sacked for much less.

On the other side of the Rhone-Alpes region, it’s all smiles at Saint-Étienne. Early goals from captain Loic Perrin and Jordan Veretout gave the home side a commanding lead over bottom-placed FC Lorient.

In the second half, Kevin Monnet-Paquet picked up Romain Hamouma with a net cut-back and the forward made it 3-0 before the hour mark.

It was then left to new signing Jorginho to make it four. There was an element of luck, Nolan Roux’s shot evading Benjamin Lecomte before falling at the feet of the Portuguese attack. An easy day for Les Verts and they are now just one point behind Lyon in fourth, a great way to warm up for a visit to Old Trafford on Thursday night.

“Our double-header against Manchester United will be for our players,” Christophe Galtier revealed. “It was they who earnt the privilege of playing such a match. For mine, if we want to keep having European nights like these, we need to perform in the league, so I'm focused on our upcoming clashes with Caen and Montpellier.”

Les Canaris rolled back the clock on Sunday night, showing glimpses of the old days when they were one of the most powerful clubs in France. Taking on Rudi Garcia’s Marseille, Nantes were superb across the pitch and OM couldn’t keep up.

Poor defending from the away side failed to clear some early danger and Diego Carlos gave the home side the lead. Then, eight minutes later, there was little they could do after a bit of magic from Mariusz Stępiński beat the OM defence and he made it 2-0.

A stern half-time team-talk from Garcia worked and Marseille got one back through Bafétimbi Gomis, but less than a minute after making it 2-1, it was 3-1 to Nantes. More poor defending saw Léo Dubois pick out Adrien Thomasson unmarked in the box.

Gomis would dispatch an excellent cross from Morgan Sanson to give us a grandstand finish, but the Swansea loanee had to leave the pitch through injury and Marseille had nothing left in attack. A huge win for FCN, but for Marseille, it’s a huge blow as they try and qualify for Europe this season.

“I think we played a great match, with lots of positives,” Nantes coach Sergio Conceicao said after the game. “We built this win on our defensive organisation. We knew that if we pressed them early on in their moves, that they would make mistakes. My lads defended magnificently; we were compact at the back and then dangerous when we broke. It was our best performance since my arrival and I'm happy because we were mentally tough.

Elsewhere, all the bottom five lost this weekend, but the biggest losers were Lille, losing 2-1 at home to Angers. That moves them down to 17th and in desperate need of wins under the new ownership of Gérard Lopez.

“Of course I am worried!” Admitted coach Patrick Collot. “That is three consecutive defeats including two at home against direct rivals. The season is not over so we need to recover well and keep working hard. We need to face up to the situation in which we find ourselves. Hard work is the only way to get out of it. New signings, those who were already here, we are all together in the same boat and we need to pull together in the same direction.”

One thing in their favour is how close the league is at the moment, just four points separating Montpellier – who won 3-0 away at Nancy – to SM Caen in 18th. Lille travel to Caen next weekend in what is becoming a must-win six-pointer.

Toulouse are a club in form. A stunning overhead kick from Andy Delort helped them to a 4-1 win over SC Bastia. The Corsican side shot themselves in the foot with two red cards, but the French striker now has three goals in three games and has helped Le Téfécé climb to ninth. He could spark a late run to bring European football to the Rose city.