To the average Premier League fan, Watford are not a club which get the blood pumping. They're interchangeable with any number of other sides enjoying their moment in the sun. Yet ask the same fan to name one Hornets player and chances are they'd respond with Troy Deeney.

For a multitude of reasons, some good, others not so, the Hornets' No.9 is synonymous with the largely inoffensive club from Hertfordshire. In almost a decade at Vicarage Road, Deeney has endured more ups and downs than Ross and Rachel of Friends fame.

He's been knocked down more times than a Weeble and, like the kids' today, he's bounced back. Every. Single. Time.

Goal droughts, a spell in prison, that red card against Leeds United, those comments about Arsenal. Redemption at Huddersfield Town, that goal against Leicester City, that penalty against Wolves en-route to the FA Cup final. It's been one hell of a ride.

This month Deeney will turn 31. While he bounced back from a disappointing 2017/18 to net 11 times in all competitions last term, the Hornets must begin planning for life after the bruising forward who has been their top scorer in four of the last six seasons.

Using data from the Football Whispers Lab, we've identified five forwards who fit the profile of player the Hornets tend to sign who could, eventually, succeed Deeney.

A player relegated as part of one of the most wretched Premier League teams ever might not be the sort of inspiring name Watford fans were hoping for. But the Benin attacker ticks a lot of boxes. For a start, he is only 24. At 6ft 3in he is a strapping figure and he has two seasons of English football behind him.

But what about the goals, you ask? In his first season with the Terriers, Mounié bagged seven (0.33 per 90) as David Wagner's surprise package rode the crest of the wave which carried them out of the Championship to avoid relegation. But a second miracle was beyond Huddersfield and Mounié netted just twice – although Town managed a meagre 22 Premier League goals.

Deeney is as famous for his honesty and physically imposing style of play as his back story. Picked up by League One Walsall while playing locally for non-league side Chelmsley Town, he neglected to turn up for a trial at Aston Villa until the final day as he was only interested in playing in the trial match. His rags-to-riches tale is an inspiring one. But he isn't alone.

Weydandt was playing in Lower Saxony city's amateur leagues four years ago and only joined Bundesliga side Hannover last summer to bolster the team's second string.

Making the leap from fourth tier 1. FC Germania Egestorf/Langreder, the 6ft 4in forward impressed coach Andre Breitenreiter to earn a first-team chance, netting twice on his debut in the DFB-Pokal before bagging an equaliser 75 seconds into his Bundesliga debut against Wolfsburg.

He could bring something new to Vicarage Road and would not cost the earth either. 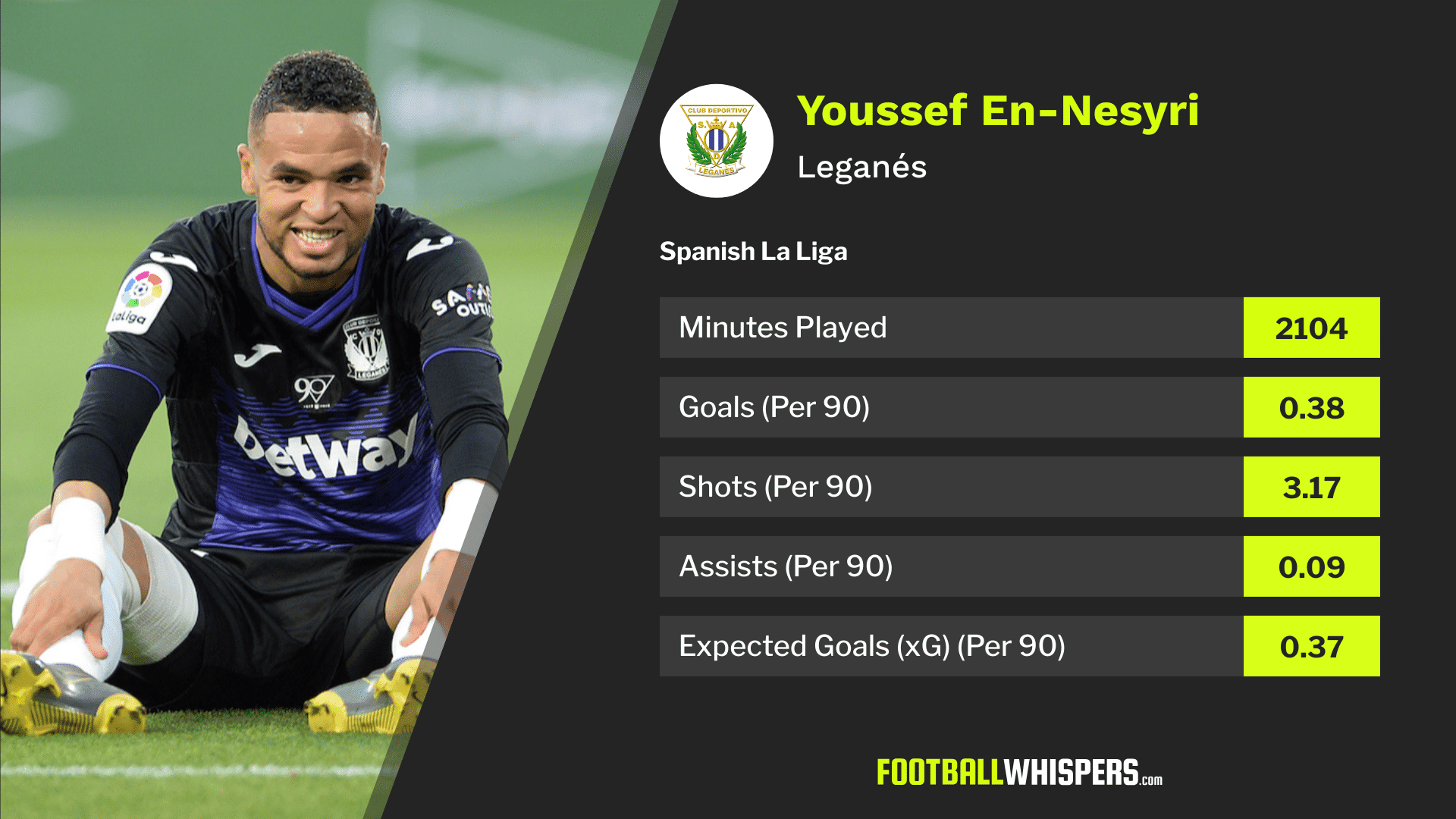 Watford have had success shopping in La Liga in recent summers, bringing Gerard Deulofeu and Kiko Femenía in the last couple of years. However, there is a note of caution, too, with José Manuel Jurado, Nordin Amrabat, Isaac Success enjoying mixed Vicarage Road careers.

Moroccan international En-Nesyri, though, could be exactly what the Hornets are looking for. Tall (6ft 2in), physically imposing and no slouch either, the 22-year-old bagged Leganés' first-ever La Liga hat-trick last season against Real Betis. The Andalusian outfit are reportedly keen on the former Málaga forward, as are Arsenal.

In 2018/19 En-Nesyri won 6.28 aerial duels per 90 vs. Deeney's 7.38 while he attempted (2.69) and completed (1.15) more dribbles than the Watford man – including the hat-trick goal against Betis for which he held off the nearest defender before slotting home on the run.

On the face of it, the 21-cap Moroccan international looks to have all the tools to be a hit in the Premier League. 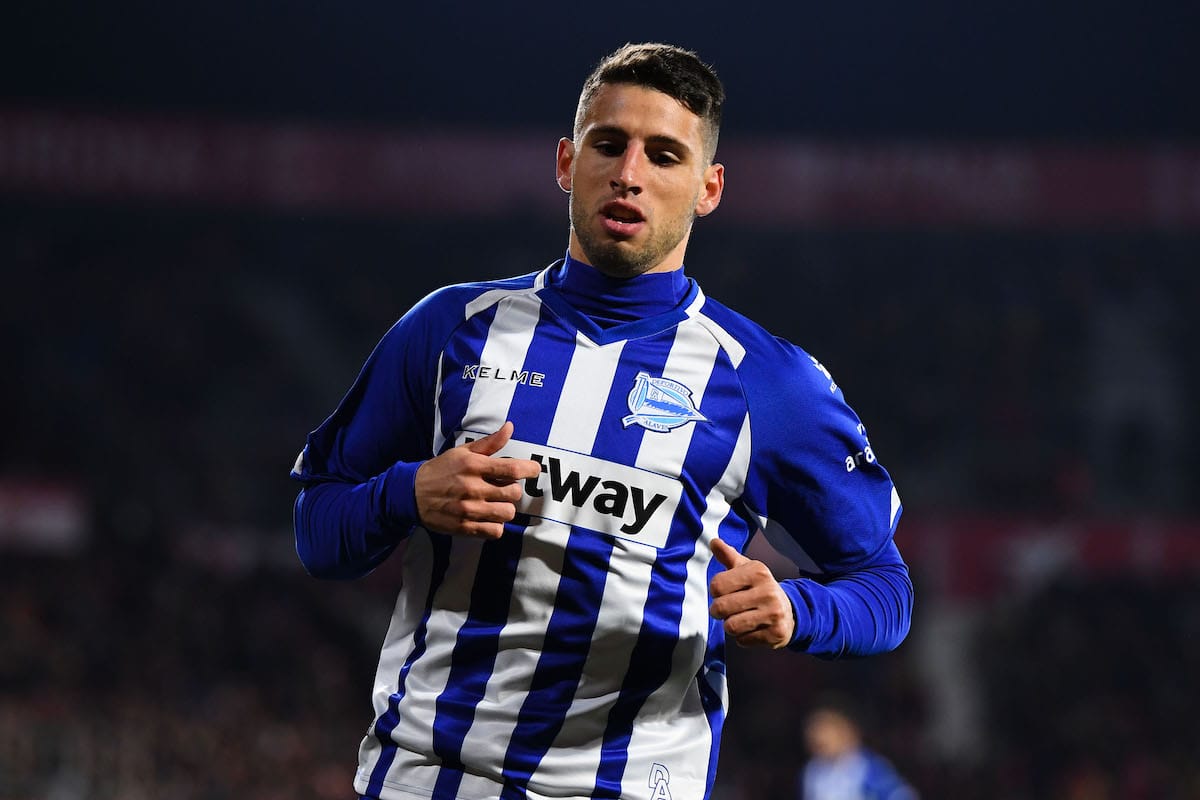 The name might ring a bell as one of West Ham United‘s stranger signings in recent times. Now 25, Calleri spent the 2016/17 season on loan at the London Stadium, scoring just once in 17 appearances for the Irons.

Since signing for Uruguayan side Deportivo Maldonado in January 2016, Calleri has never turned out for his parent club. That's because El Depor sign players with the expressed aim of loaning them out as a method of generating revenue. In more than three years as a Deportivo player, Maldonado has turned out for São Paulo, West Ham, Las Palmas and, most recently, Alavés.

At 5ft 10in, Calleri is by far the smallest striker on this list but holds his own physically. He won 6.41 aerial duels per 90 last season and netted four headed goals for Alavés – one more than Deeney. 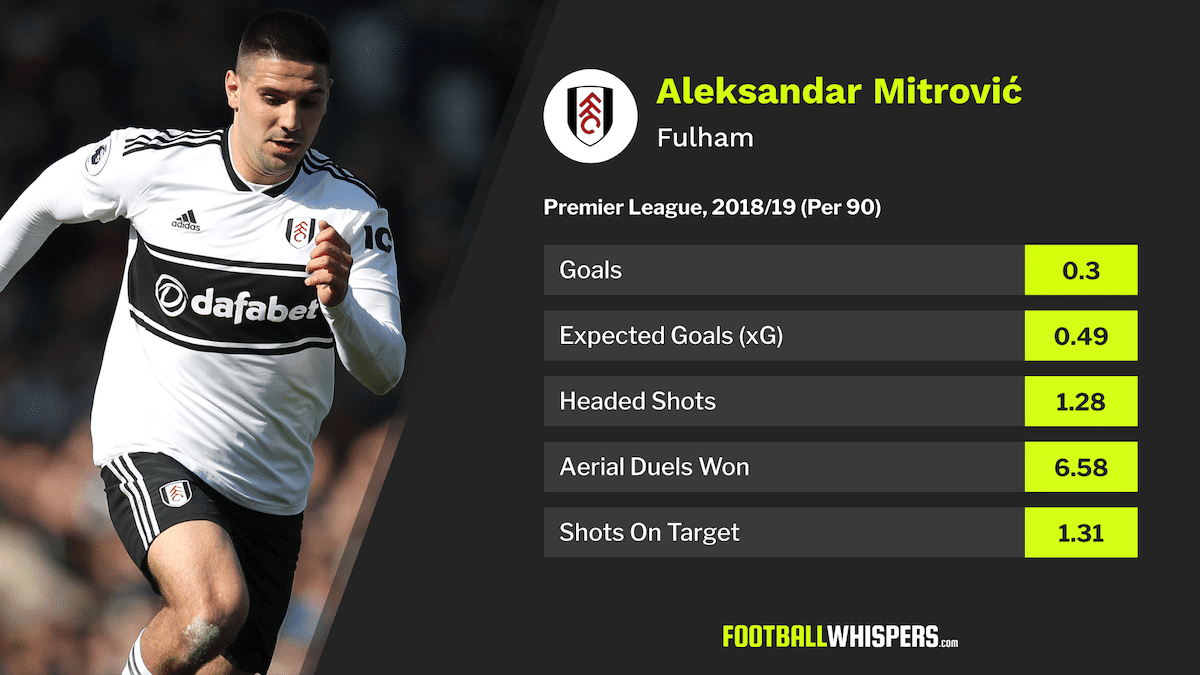 The rest of the players on this list are all ones for the future and while Mitrović, at 24, is not yet in his prime he will move on this summer. So if the Hornets want a proven Premier League goal-getter they must act quickly to snap up the Serbian.

Eleven goals for the Cottagers was not enough to keep the West Londoners in the top-flight. Mitrović did enough to ensure he won't have to drop back down to the Championship after netting 12 in just 18 starts to get Fulham – then bossed by Watford favourite Slaviša Jokanović – out of the division while on loan in 2018.

Mitrović has matured since his Newcastle United days where he picked up two red cards in his first season in England – he has not been dismissed since.

Sixth among Premier League strikers for aerial duels won (6.58 per 90) while chipping in with six headed goals (no-one got more last term), the rambunctious Serbian would not come cheap. But the Hornets' hierarchy have spent big for the right player in the past.