Now more than ever, Premier League clubs tend to do their shopping abroad. For a period, La Liga was the market of choice. Then Ligue 1 was the flavour of the month. However, over recent years clubs have favoured the Bundesliga.

While the quality on show isn’t as high as it perhaps is in the English top-flight, the style across both leagues is somewhat similar.

So ahead of the January transfer window opening, we've taken a closer at five Bundesliga players who could soon be making the move to England.

One of the most exciting wingers in Europe during the 2014/15 season, injuries have plagued Herrmann for a number of years.

However, he’s back fit and back firing this term. The 28-year-old has five goals and three assists to his name in 681 minutes for surprise Bundesliga title challengers Borussia Mönchengladbach.

Under new manager Marco Rose, Hermann looks better than ever. Gladbach have a host of interesting names within their ranks right now and their success won’t go unnoticed.

They’ll want to keep the likes of Breel Embolo, Marcus Thuram and Alassane Pléa so may sacrifice Herrmann to add funds to the pot to reinforce their title challenge in January.

Weghorst seems readymade for a mid-table Premier League side.

For starters, he isn’t a forward who relies on volume. He’s averaging just north of two efforts per 90 and close to 50 per cent of them are hitting the target.

More importantly, a quarter of these shots up in the back of the net. 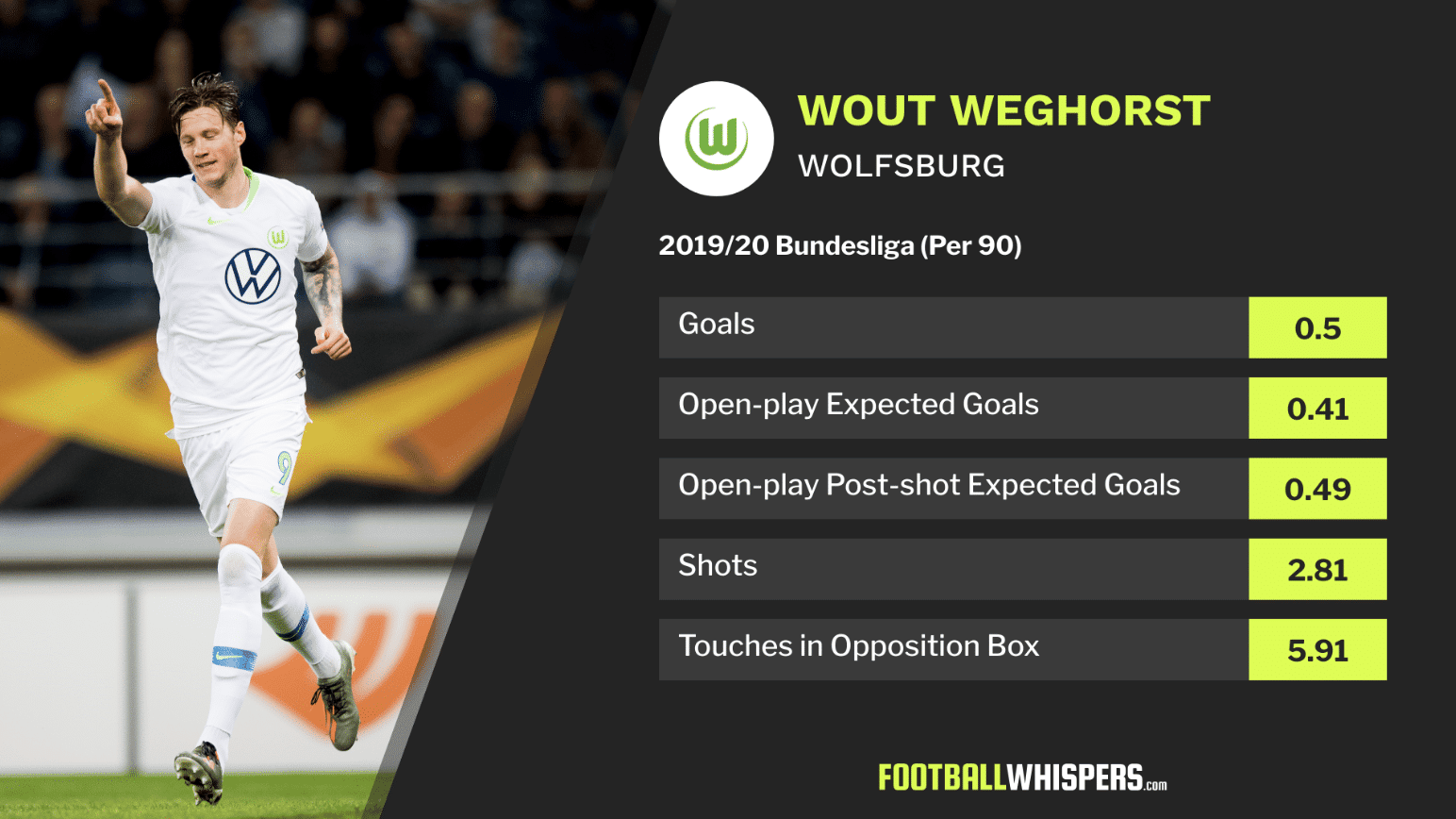 A robust, old-school number nine, he’s got everything required to be the focal point for a side in England.

Linked to Crystal Palace, he could do a job for a number of teams. But at 27 years old, Weghorst is still young enough to justify a hefty price tag. One that Wolfsburg would undoubtedly demand.

RB Leipzig have a glut of players being courted by a number of Europe's elite.

Timo Werner is wanted by Liverpool, Manchester United and Chelsea according to several reports, Dayot Upamecano is an Arsenal transfer target while others remain interested in Ibrahima Konaté, Yussuf Poulsen, Emil Forsberg and Nordi Mukiele.

But one player regularly overlooked is Sabitzer. The utility man can play anywhere across the middle third as well as in attack.

The 25-year-old is enjoying life under Julian Nagelsmann and is already just two goals shy of his most productive ever Bundesliga season. He's involved himself in nine goals in just 14 domestic appearances this term and added two goals and two assists in four Champions League matches. He shows no signs of slowing down, either.

The Austria international seems perfect for that progressive number eight role being utilised by many of the best clubs in England.

Reportedly on Aston Villa's radar, the £33million-rated winger is catching the eye for Werder Bremen.

Rumoured to be a Celtic transfer target prior to his move to Germany in the summer of 2018, the 23-year-old has showcased the abundance of talent he has since making his debut.

He netted nine times last season and chipped in with a further five assists while this time around he has six goals and three assists already. Explosively quick over short distances, Rashica can finish with either foot and has an unpredictability to his game that many Premier League clubs would welcome.

He won't be cheap but any outlay now could be doubled in a year or two if he's able to carry the form he's shown in both Holland and Germany over to England.

The 22-year-old is another player to have burst onto the scene with Gladbach this term.

He spent time away from the club on loan last season but Rose has given him a chance to be a part of the first-team and he's not wasted the opportunity.

With a wand of a left foot, Bénes has quickly crafted out a role for himself as a creative outlet for the league leaders. He's a set-piece expert, an aggressive ball-carrier and really progressive when in possession.

Bénes has already registered four assists in the Bundesliga and given he is adept at playing anywhere across the midfield, he's got the potential to be moulded into an all-action centre-midfielder.