Maverick, maestro, facilitator and a (questionable) style icon. Roberto Firmino is many things, but before this season, a poacher he was not. It's understandable. After all, his first two seasons with the club yielded a combined 21 goals in just over 5,000 Premier League minutes.

Capable of the sublime at times, his ability when in front of goal could be described as erratic. He switched between being utterly devastating to incredibly frustrating on a consistent basis. It resulted in fans demanding the club delve into the transfer market to sign a 30-goal-a-season striker, not to replace their No.11 but to supplement his skill set.

Álvaro Morata, Alexandre Lacazette, Andrea Belotti and Timo Werner were all linked with a move to Merseyside, but Jürgen Klopp opted to keep faith with his enigmatic forward. The arrival of Mohamed Salah saw Firmino take the famous No.9 jersey at Anfield.

The Brazilian, however, has reinvented himself under the Liverpool manager this season, so much so that it's now not naive to suggest he's as much of a finisher as he is a creator, with some going as far as to suggest he's the most complete forward in Europe.

The 26-year-old has been involved in 35 goals for the Reds so far this term and he's managed to put the ball in the back of the net on 22 occasions. He's been responsible for 21 per cent of Liverpool's chances in the Premier League, a stat only Salah can better.

Firmino isn't prolific but he's much more selective than other top strikers in his choice of shots. For context, Christian Eriksen (74) and Kevin de Bruyne (76) have taken more shots than Liverpool's Brazilian forward (69).

Yet the former Hoffenheim attacker holds a seven-goal advantage over the Spurs playmaker and Manchester City's dynamic midfielder. Yes, Firmino's a forward so should, in theory, score more goals, but he's had fewer shots. It shows that his shot selection adds value to his chances.

It's clear when looking at his post-shot xG (expected goals) numbers. His xG for the season is 7.78, but when analysing where his shots have gone on goal that number rises to 10.03.

That's been the difference this season. His xG90 over the past two seasons has remained the same, but his finishing ability has improved.  He's more clinical, in terms of shots needed per goal (4.92), than other top forwards in the Premier League.

For even more context, Harry Kane‘s post-shot xG is just 0.31 up on his xG total. Kane has 24 league goals to his name this term and is averaging a goal every 6.75 shots. Firmino hasn't got as many goals to his name as the Spurs star but he's had 93 fewer shots, meaning he's not as wasteful.

Furthermore, 56 of Kane's shots have come from outside the area – of which he's converted three – compared to Firmino's 24. The Reds have on their hands a clinical No.9, scoring goals people would usually associate with a poacher. 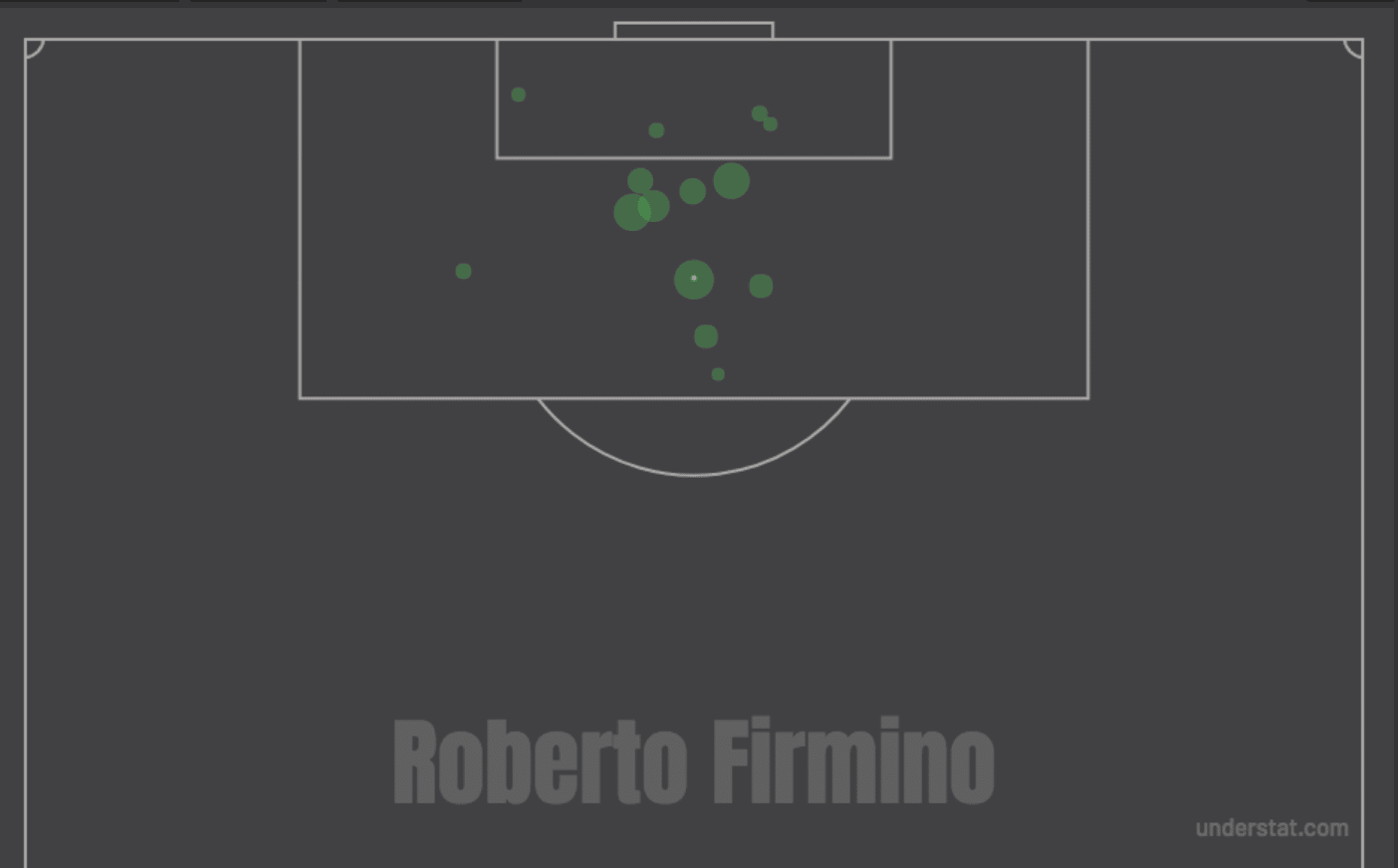 The goal map above, via understat.com, shows the positions Firmino has scored from this season. He's hit nine goals from within 11 yards of the goal. The striker is the man putting the exclamation point on some of Liverpool's scintillating attacking play.

Only two players have scored more goals from inside the six-yard box and only one, Kane, has had more shots in this part of the pitch. The stats paint a picture of a player who does his best work when inside the penalty area. It goes to show how he's changed as a player under Klopp.

Another interesting stat is headed goals in the Premier League. Firmino, not famed for his aerial ability, has scored three this term – the fourth highest amount.

When analysing Firmino's performances, it's clear that there's a desire on his part to get himself into dangerous areas. There's a hunger for goals and he's developed a ruthless instinct. 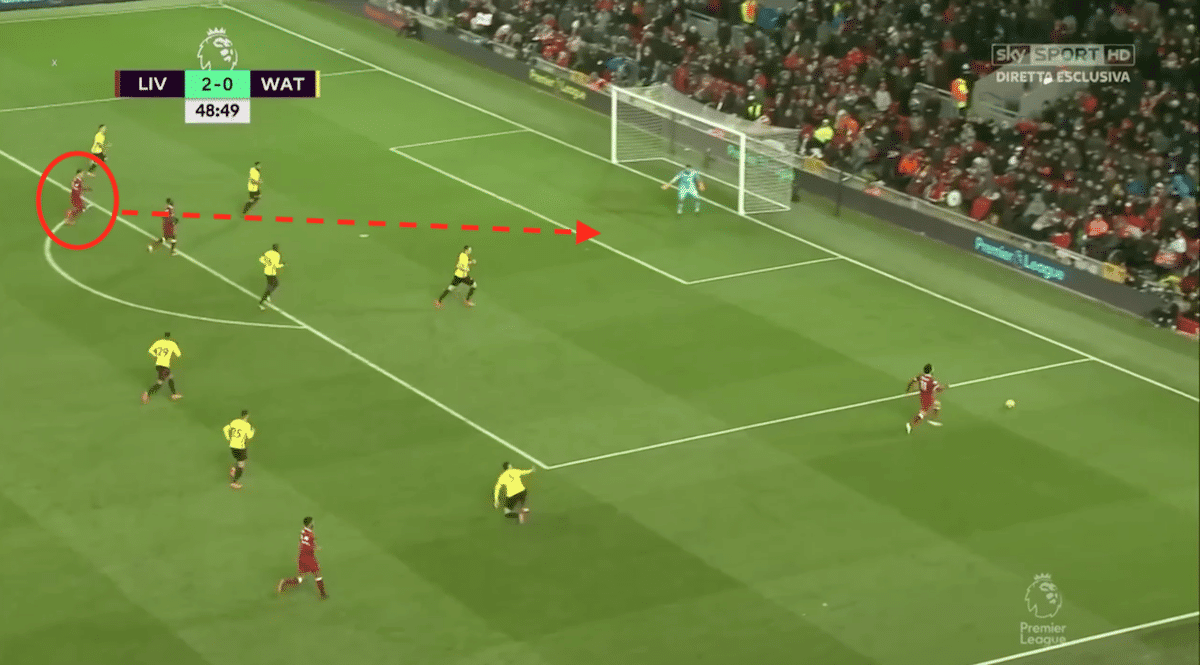 It was evident against Watford. The Liverpool No.9 is circled on the edge of the penalty area. Salah has raced clear of Miguel Britos and manages to keep the ball in place. Firmino could linger at the back post and put the responsibility on the Premier League's top scorer to find him. But he doesn't.

The Samba star makes a run across the face of goal. He gets as close to the goal as possible and makes it easy for Salah, who manages to weight the pass to perfection, and Liverpool bag a third. 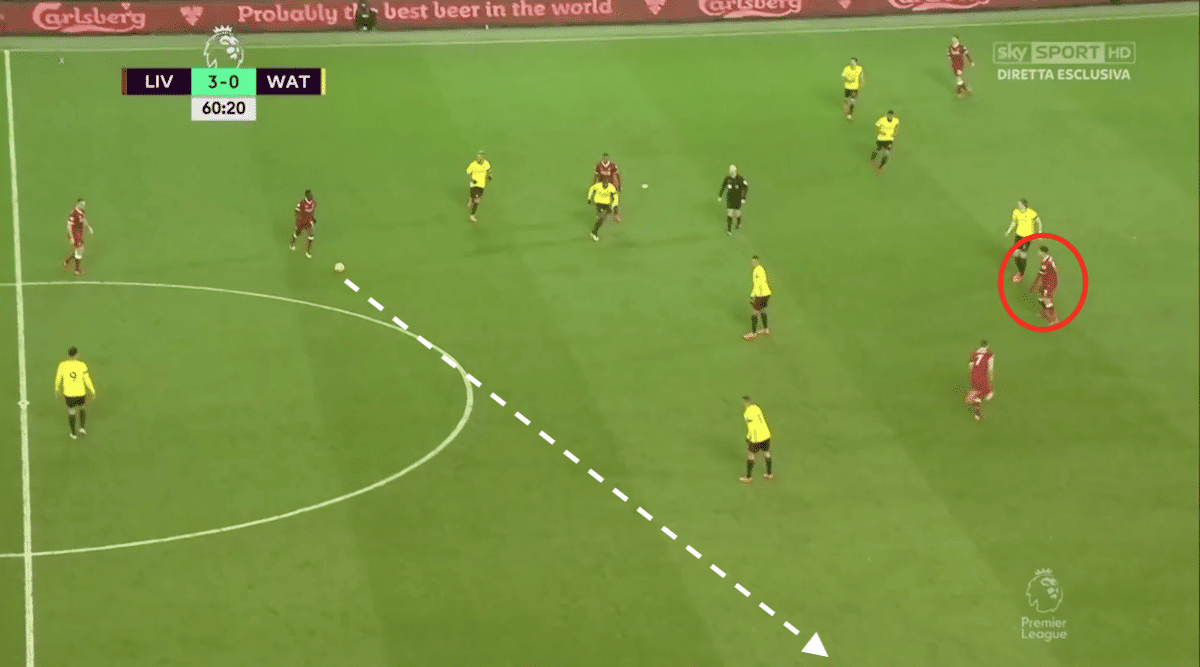 Firmino, again circled in red, has dropped into space and is showing for the pass. Sadio Mané ignores this option and fires it out wide to Joe Gomez. The No.9 could move to the right and give the Liverpool right-back a passing option, and last season he probably would have. But as soon as the ball is worked out wide he puts creative responsibilities to the back of his mind and breaks his neck to get into the penalty area. 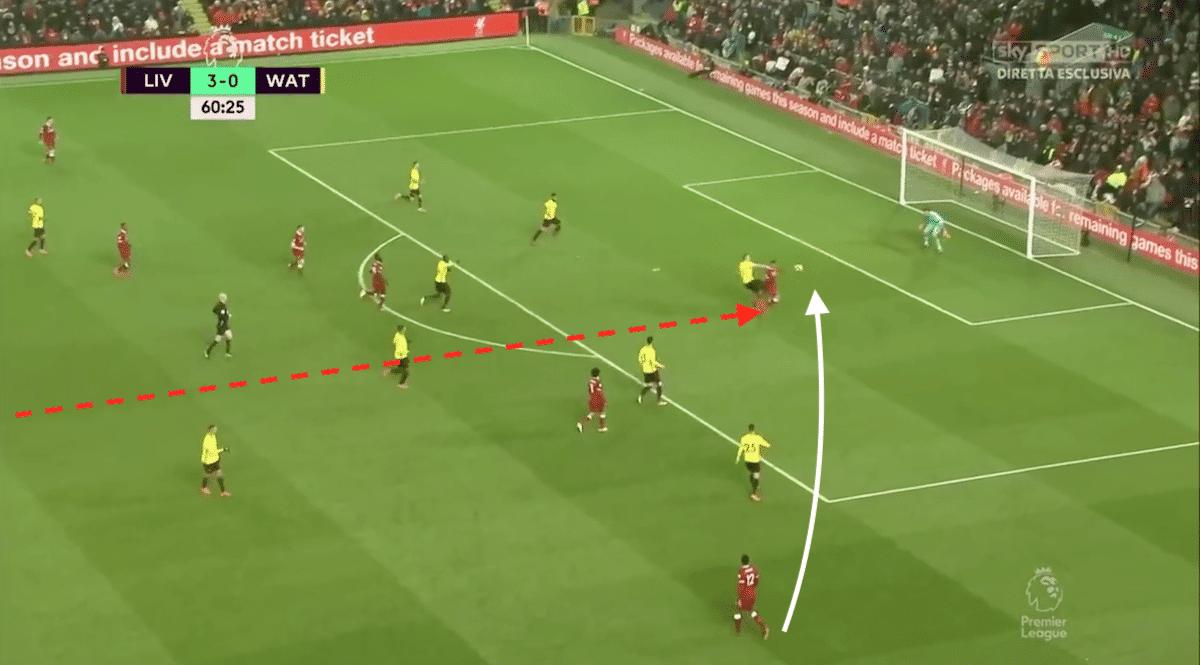 Gomez would have seen his striker pointing to the penalty area, and this, no doubt, is why he opts to whip the ball into the area. The Liverpool forward gets on to the end of it, even managing to hold off Sebastian Prödl. His headed effort is easily saved but this type of movement and chance sums up Firmino 2.0.

Klopp's done a lot of work and undertaken a number of projects since moving to Merseyside, but his greatest one might be managing to develop Firmino into one of the best forwards in the Premier League.