The most worrying problem for a football team’s attack is an inability to create chances. The next most troublesome thing would be the ability to create them but not put them away. Liverpool – Tuesday's battering of minnows Maribor in the Champions League aside –  currently sit in the latter camp.

After putting four past Hoffenheim and Arsenal earlier in the season, Jürgen Klopp’s side have had problems when it comes to putting away chances. Despite still being able to score the odd goal here and there, given their problems at the back it has been important that the attack put away all of the good chances they are presented with. But this is something they haven’t been able to do.

The club are third in the league table when it comes to expected goals, but they are also the second biggest under-performers when it comes to converting these into actual goals. They have created more chances than any other team with 124, ahead of Manchester City’s 117.

Mohamed Salah has taken some of the flak for not converting his chances, but a lot of the criticism in recent times has fallen on the shoulders of the club's striker, No. 9, Roberto Firmino.

Handing the Brazilian that number, which he took when Salah was given his original No 11 shirt, was significant in that it indicated that Klopp wanted him to lead the line more often than not.

In Roberto Firmino's 4 league starts as a striker he has 3 goals & 3 assists. pic.twitter.com/svc9M3t5r1

In previous seasons Firmino had boasted a good records when occasionally operating as the central forward, but leading the line regularly in this new system gave him an altogether different challenge – one where he might have to accept not always being in the goals.

While it’s easy for a player who’s used to playing as an attacking midfielder to accept he won’t be the most advanced player – even if he is the designated striker – and it’s easy for the manager who knows what the player is being asked to do to accept the same, it might not always be easy for onlookers to be OK with Liverpool’s “striker” not scoring goals.

Though a lot of the blame will naturally be placed at Firmino’s door when it comes to the basic idea that ‘the striker isn’t scoring,’ Klopp's system has to be taken into account. Daniel Sturridge’s goalscoring record has also suffered as a result, as he’s also finding himself having to drop deep to receive the ball, and can often end up as more of a link-up player rather than the lurking centre forward he’d rather be.

In Klopp’s current formation, when everyone has been fit, the wide players have been acting as auxiliary strikers. Salah and Sadio Mané will find themselves effectively operating as a strike duo in a shape which resembles a 4-4-2 diamond. 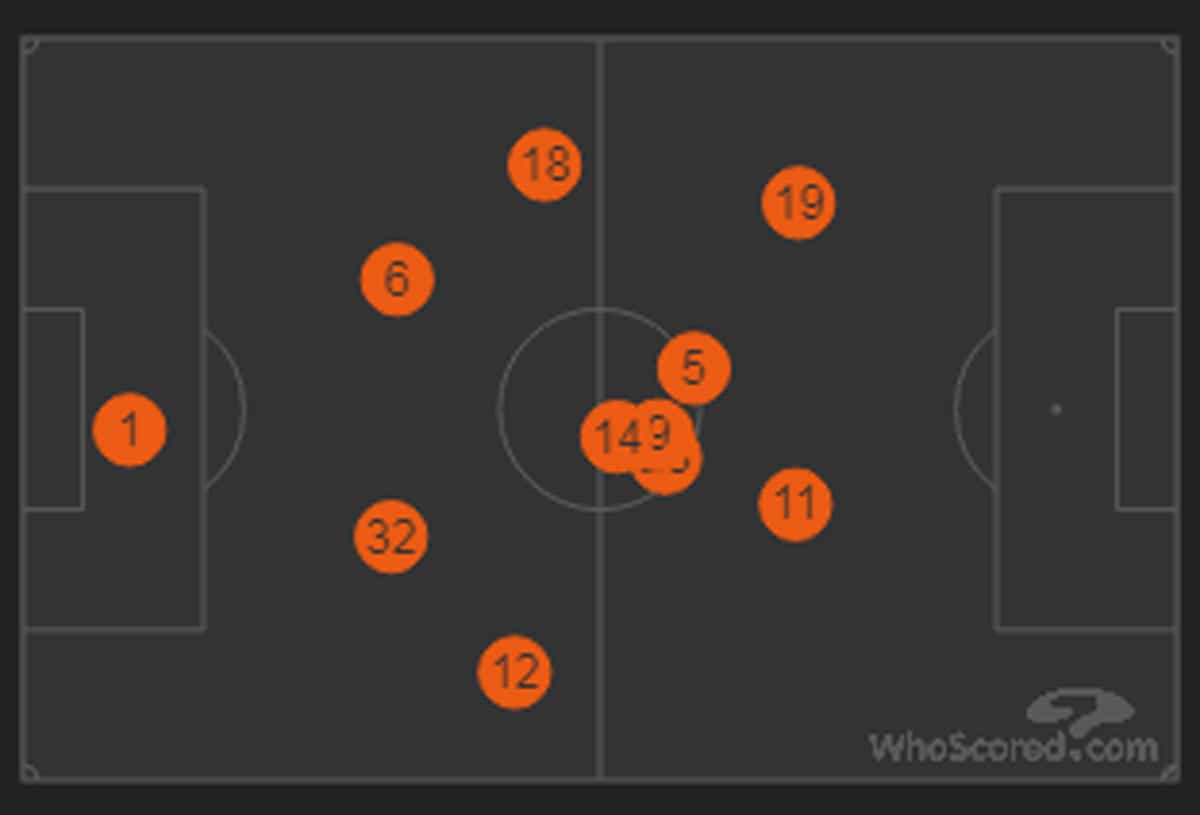 As shown in the image above, which illustrates the players' average positions in their win against Arsenal, Firmino (9) spends most of his time with his back to goal, linking the play and picking the ball up in midfield. The two wingers bomb on ahead of him, working with the full-backs and the two central attacking midfielders.

The solution may seem to be a case of signing a “proper” striker to lead the line, but if this striker were to come in and play in the same system then they would face the same problems Firmino is facing. There’s also little chance that Liverpool would find another player who would fit this current system as well as the Brazilian does.

So maybe the problem is with the system? What if Liverpool could have Firmino doing what he does now, and also have a player in front of him whose sole job it is to roam the final third? At the moment Firmino’s task is trying to combine that of a target man, attacking midfield playmaker and, such is his will, work-rate and general tenacity, a central midfielder.

Acting as an attacking midfielder he could join the striker when the opportunity arose, but he could also drop back into midfield as much as he wanted, and the team wouldn’t lose that presence in the box.

If only they had a manager who was well versed in the 4-2-3-1 formation.

Liverpool may already have in their ranks the players to use Klopp’s favoured system from his time at Borussia Dortmund, and it may be Dominic Solanke’s way into the side. The personnel could be improved, but then it could also be improved in the 4-3-3, and any other lineup, so there would be nothing to lose really.

“The most important thing in football is creating chances and we did that. We work on this like we work on all parts of our game,” Klopp said in September, after a 2-2 draw with Sevilla produced plenty enough chances to score more and win the game.

“We are not the most lucky team in world football but we did very well in creating chances against a defensively-oriented team. We did not take our chances.” He said later in the same month, after a 1-1 draw with Spartak Moscow.

And after a 1-1 draw up at at the beginning of October he commented: “I thought we were the more active and the better side and created more chances. Which we should have used. We should have won.

“We are in very promising situations and we don't score. That, of course, is a problem, but it will not stay like this. I know, I am long enough around football, it will be on the day when the knot opens and we will score more goals. That is pretty likely.”

The seven goals scored in Slovenia will give the team hope that this spurning of good chances is a thing of the past, but bigger tests lie in the league and against the two stronger sides in the Champions League group where it's often more important that chances are taken.