Finn Harps and Derry City clash in Ballybofey in the Premier Division on Sunday, July 17th. Can Derry win their third away game on the spin? Read our free predictions and find the latest odds for the fixture below in our detailed match preview.

Finn Harps are without a win in nine assignments as they prepare to take on Derry City in the Premier Division on Sunday. Read our top three predictions for this weekend’s fixture below.

With just two points collected from the last 27 on offer, Finn Harps are in the midst of a rotten run of form and the relegation candidates could suffer again when high-flying Derry City come to Ballybofey on Sunday. The Candystripes managed to win each of their last two away assignments and with their host’s confidence at a low ebb, City can be backed to record another victory on the road.

While we expect Derry to eventually get the better of an out-of-sorts Finn Harps outfit, it’s worth pointing out that City are rarely given an easy ride by their less-illustrious opponents. Indeed, both teams found the net in each of the last seven Premier League meetings between the clubs and margins have been slim on each occasion. Two of those encounters took place earlier this season and goals at both ends are anticipated again in Ballybofey on Sunday.

Check out our list of the best stats for Sunday’s fixture below alongside a tool to help you choose the best odds.

Read all of the injury updates and team news for Sunday’s Premier Division face-off between Finn Harps and Derry City below.

Finn Harps have relatively few injury worries to contend with ahead of Sunday's game. Defender David Webster and midfielder Eric McWoods are both doubtful, though neither player has been completely ruled out. Harps are 13 points adrift of safety at present.

Derry City are sweating on the availability of four players this week with Cameron Dummigan, Ronan Boyce, Ciaron Harkin and Michael Duffy all in a race to be fit enough to feature on Sunday. Derry have had continental distractions of late, so it will be interesting to see how they juggle so many fixtures. 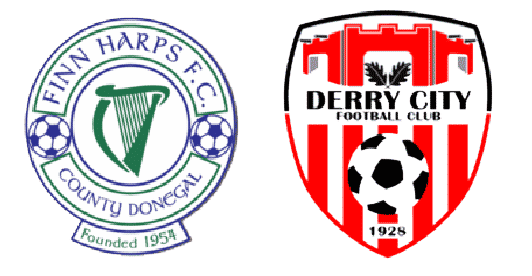 Which team is favourite to win this weekend?

The bookmakers have priced Derry City as their favourites to win this weekend.

Long-serving boss Ollie Horgan has been in the Finn Harps hotseat since late 2013.