This preview looks at the UEFA Nations League game between Finland and Bosnia-Herzegovina. This fixture on Saturday, June 4, 2022 will be a closely contested affair between the two teams at the Helsinki Olympic Stadium.

Finland make it to the match after having gone through a poor run that culminated in the 2-0 loss to Slovakia at home back in March. After a string of defeats, Bosnia-Herzegovina finished the March round of friendlies with a 1-0 win over minnows Luxembourg.

Finland and Bosnia will be eyeing a good start to the group campaign. Both teams have gone through a difficult patch of form. Bosnia required a solo goal to beat minnows Luxembourg while Finland have not managed to win since beating Bosnia back in November. Even with home advantage, Finland might struggle to break down the opposition, who may sit deep in their own half were looking for counter attacking options. Bosnia have lost only one of the last four away games.

Bosnia’s defensive approach is likely to make this game as a nonstarter in terms of entertainment. There have been less than 2.5 goals in the past five away matches for Bosnia. The last three games for Finland have also produced just under 2.5 goals.

Top UEFA Nations League Stats ahead of Finland vs Bosnia-Herzegovina

Finland have frequently shown a desire to switch formations under the regime of Kanerva. For the upcoming game, Finland could go for a 5-3-2 formation that did extremely well in the 3-1 win over Bosnia back in November. This formation would allow the hosts with enough flexibility to overcome any defensive approach by the visitors. Finland have gone for a very strong lineup that is not missing too many players ahead of the game.

Bosnia are not expected to make too many changes to the line-up which will feature a lot of experience in the form of players like Edin Dzeko. Even the bench also appears to be strong for the visitors. Unlike the home team who might go for five at the back, Bosnia might operate with four at the back and this could lead to pressure in the channels.

Questions about Finland vs Bosnia-Herzegovina 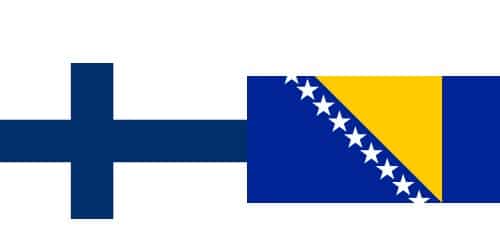 Where is the match scheduled? Helsinki Olympic Stadium in Helsinki

Which team is the favourite to win? Finland