There was renewed optimism among Chelsea‘s young players the moment Frank Lampard's appointment as manager was confirmed.

Overlooked and undervalued for several seasons, the club finally had a leader in place who was prepared to place his trust in the players schooled by the Blues.

Throughout pre-season, Lampard has weaved Chelsea's own into his side. Mason Mount has featured regularly and has impressed with his goalscoring ability from midfield. Tammy Abraham has often led the line, preferred over senior internationals Olivier Giroud and Michy Batshuayi. And Fikayo Tomori has been given valuable minutes in defence.

Mount and Abraham's positions in the Chelsea first-team squad for 2019/20 are all but cemented. Tomori's, however, is more uncertain. With David Luiz, Andreas Christensen, Kurt Zouma and Antonio Rüdiger – who is currently out injured – for competition it is no huge surprise to learn the Blues are prepared to loan out the young centre-back.

According to the Evening Standard, Tomori won't be short of suitors. Clubs in the Bundesliga and Portugal are interested in the England Under-21 international, as are Premier League side Everton.

The Toffees have enjoyed a strong transfer window. They've kept hold of their stars, namely Lucas Digne and Richarlison, and have signed André Gomes and Moise Keane is also set to arrive.

Centre-back, though, is a position of weakness. Michael Keane rebuilt his reputation last term under Marco Silva but Yerry Mina's first campaign at Goodison was disrupted by injuries and inconsistent form.

Zouma impressed while on loan and Silva hoped to re-sign the French defender permanently from Chelsea. Lampard closed that avenue for the Everton boss. “I can understand why they want him but he’s a Chelsea player and I want him,” the new Blues boss said earlier this summer.

Zouma's return to Stamford Bridge is a blow for Everton, but one that could be softened by a loan move for Tomori.

The 21-year-old, stylistically, wouldn't be a like-for-like replacement for Zouma. He doesn't have the raw power of the Frenchman nor is he as experienced – Tomori has just 30 minutes of Premier League football to his name.

Yet his performances last season on loan at Derby County indicated he is ready for the top flight.

Tomori was named the Rams' Payer of the Season despite the notable performances of fellow loanees Mount and Harry Wilson. That was partly down to his consistency.

Tomori started 54 games across all competitions last term – predominately alongside the experienced Richard Keogh – and was rarely at fault for any goal conceded.

He was also confident in possession. Lampard, the manager at Pride Park prior to his move to Chelsea, encouraged his young side to build possession from the back.

That placed responsibility on Tomori to start attacks and he was ninth among Championship defenders for passes per 90 (49.09). Of those, 39.1 percent went forward which highlights the young defender didn't simply rotate the ball and play it safe, he took risks to advance his side up the pitch. 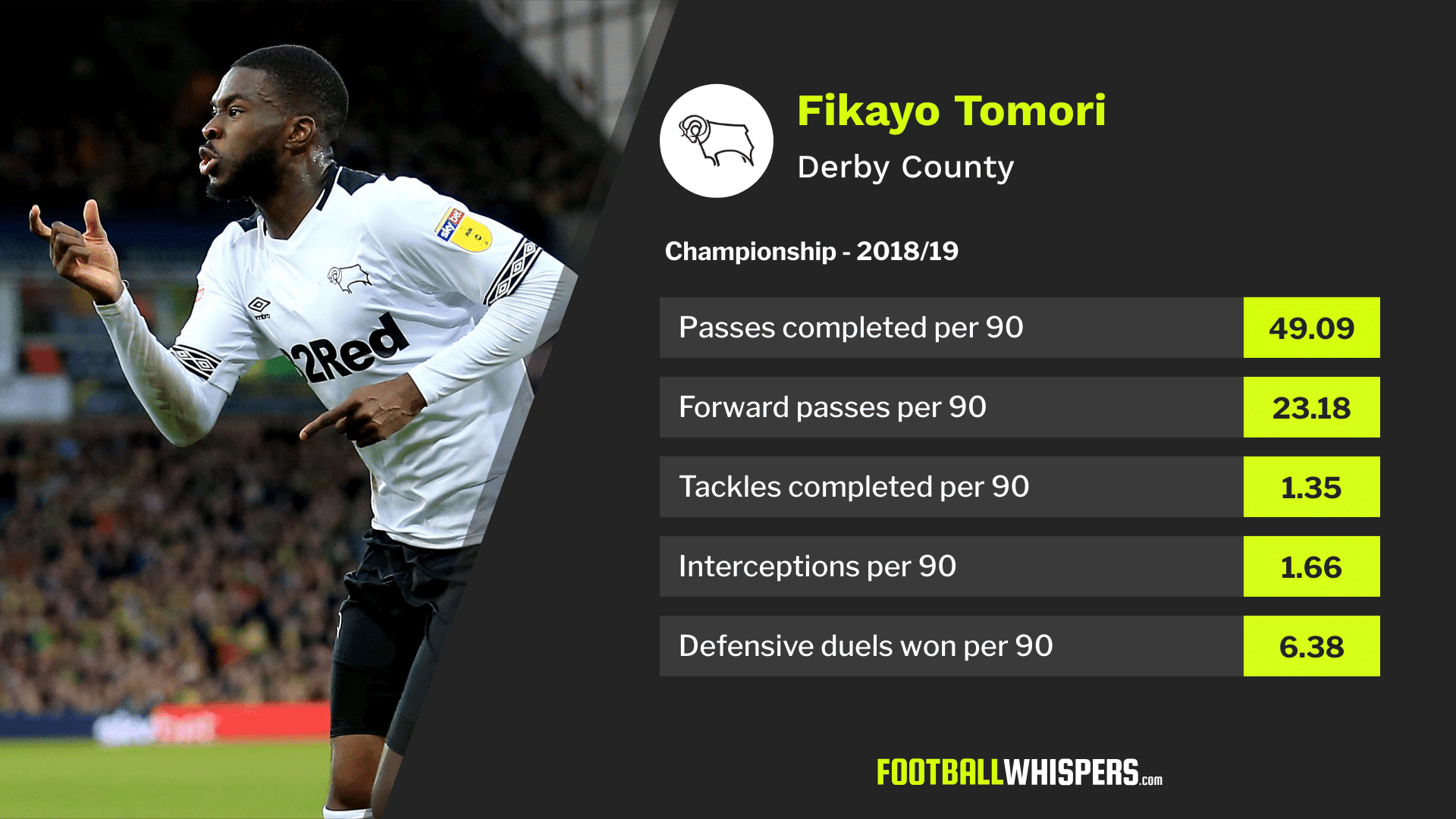 Silva would undoubtedly welcome Tomori's ball-playing ability, which is an aspect of his game that eclipses Zouma's. But can he defend?

It's never easy to judge a centre-back off numbers alone; the busier they are, the higher their output tends to be.

For instance, Derby were a side who often controlled games through possession – their average of 55.07 per cent was the fifth highest in the second tier last season – so Tomori wasn't called into action as often as other centre-backs.

Tomori isn't as aerially dominant as Zouma and despite his size – he stands 6ft 1ins – can be overpowered by strong, experienced centre forwards. That might not be a dealbreaker for the Toffees as alongside Keane, Tomori could take up the role of sweeper.

There are few strikers that could beat the young defender for pace and if the former Burnley man challenged for a header, Tomori could drop back in order to quell the threat from a flick-on.

He could prove the ideal partner for Keane and ensure Everton have everything they need to launch an assault on the Premier League top six this season.