Not many players in the Premier League can say they’ve pocketed Mohamed Salah.

Since his return to England, the Egyptian forward has 58 goals across three seasons and he’s chipped in with 21 assists. With back-to-back Golden Boot awards in the trophy cabinet, the 27-year-old is near impossible to stop.

Yet, in what was only his third appearance in the Premier League, Fikayo Tomori shut Salah down. The Liverpool No.11 may have registered an assist but it was from a set-piece. In open play, it was arguably his worst game for the Reds.

What's more impressive is that Tomori played 70 minutes of the match against the league leaders on a yellow card. He made five tackles and missed just the one – an early challenge on Jordan Henderson for which he was booked. After that, he was near faultless.

The 21-year-old also completed 100 per cent of his dribbles against one of the best pressing sides in Europe, won a third of his aerial duels, completed 82 per cent of his passes, and even managed one key pass against the European champions.

The main takeaway from the defeat, however, was just how easily Tomori made defending against Salah look.

One instance in the first half saw the Liverpool forward get the wrong side of the Chelsea centre-back and, with space to attack, Salah raced into the penalty area.

Others in this situation would panic and perhaps lunge in. Not the former Derby County loanee.

He kept pace with Salah and brushed him off the ball. Tomori then held the former Chelsea player off and eventually won a free-kick. It was like watching an experienced centre-back defending against a lightweight wide forward trying to make a name for himself. 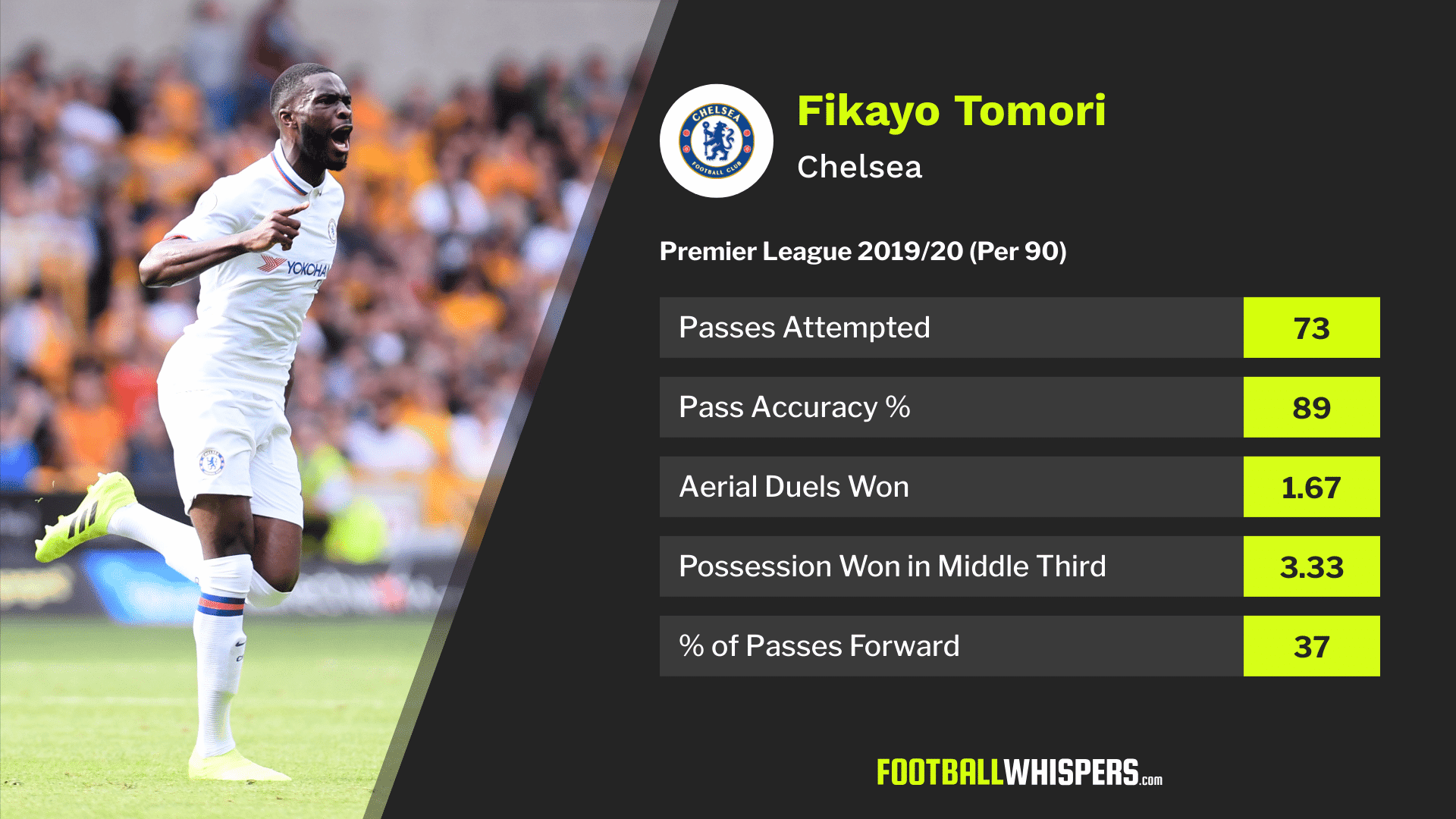 It's been a quick turnaround at Stamford Bridge but Tomori is now Frank Lampard's best defender. He started the season behind Kurt Zouma and Andreas Christensen but replaced the Dane during the 2-2 draw with Sheffield United. Since then, the 21-year-old has started every game.

Though Chelsea are far from defensively solid – they've conceded six goals in the three matches Tomori has started in the Premier League – they do look a better side when the youngster is part of the defensive set-up.

His explosive acceleration means he's able to cover his centre-back partner as well as both full-backs, against Liverpool he could be found in the right-back spot at times.

This pace gives him an advantage over rivals for his place in Lampard's XI.  Christensen, for example, is a composed centre-back who can repel aerial attack after aerial attack, but he's not the quickest and he's not the most confident when having to defend large spaces.

If Chelsea want to play a high-press, something which looks likely under their new boss, they need defenders who are comfortable in that high-line.

Tomori isn't just comfortable, it's as though he relishes having to defend half of the pitch.

Tammy Abraham and Mason Mount are the two Chelsea youngsters Lampard is reportedly building around. Reece James is likely going to get an opportunity at right-back when he's back to full fitness while Callum Hudson-Odoi is arguably the most talented of the current crop of academy graduates.

But Tomori could be the most important youngster for the Blues. The one player they simply cannot afford to lose. You see, there are other Mounts out there, individuals with superb technical ability and a work rate to match. There are other Abrahams, goalscorer supremes, and other Hudson-Odois, perhaps not as talented but players who offer what the dynamic wide forward does.

However, players like Tomori are at a premium. Homegrown, aggressive in and out of possession, adept on the ball and powerful in the air. With a little more experience, clubs would be willing to pay Virgil van Dijk money to sign him

Harry Maguire went for £80million and he's not as agile or as flexible as the Chelsea No.29. Tomori could well develop into one of the best defenders in Europe. He'll make mistakes in this young side but he'll improve because of the first-team football he's being given.

Chelsea have a serious talent on their hands. Develop him properly and they may have found their next long-term captain.