Despite an almost unbeaten domestic season, it seems that Barcelona fans aren’t happy with how their team has performed in 2017/18.

This won’t have been helped by the humiliating exit from the Champions League to Roma in the quarter-finals, but the rumblings existed long before that.

Results can be deceiving – Sir Alex Ferguson’s last years at Manchester United are a prime example. United kept going at the top of the Premier League table, but fans noticed that performances were shaky and unconvincing and, sure enough, the magic soon wore off.

Barca fans will, no doubt, be worried that the same might happen to their club, but they might have less to worry about than they think.

Just a matter of luck?

When the results seem to mask performances, it’s time to turn to the statistics to see what they say, and Barcelona’s Expected Goals (xG) have remained at a similar level to last season.

The difference between their xG and their opponents’ only dropped minimally, from +45.3 last season to +42.5 this time around. Using a model that takes into account shot placement, the difference is even narrower, and virtually inseparable: +54.77 vs +54.2.

So, why do things feel so different?

Well, part of it might be how many of their shots actually found the back of the net. Last season, Barcelona over-performed against their xG hugely. 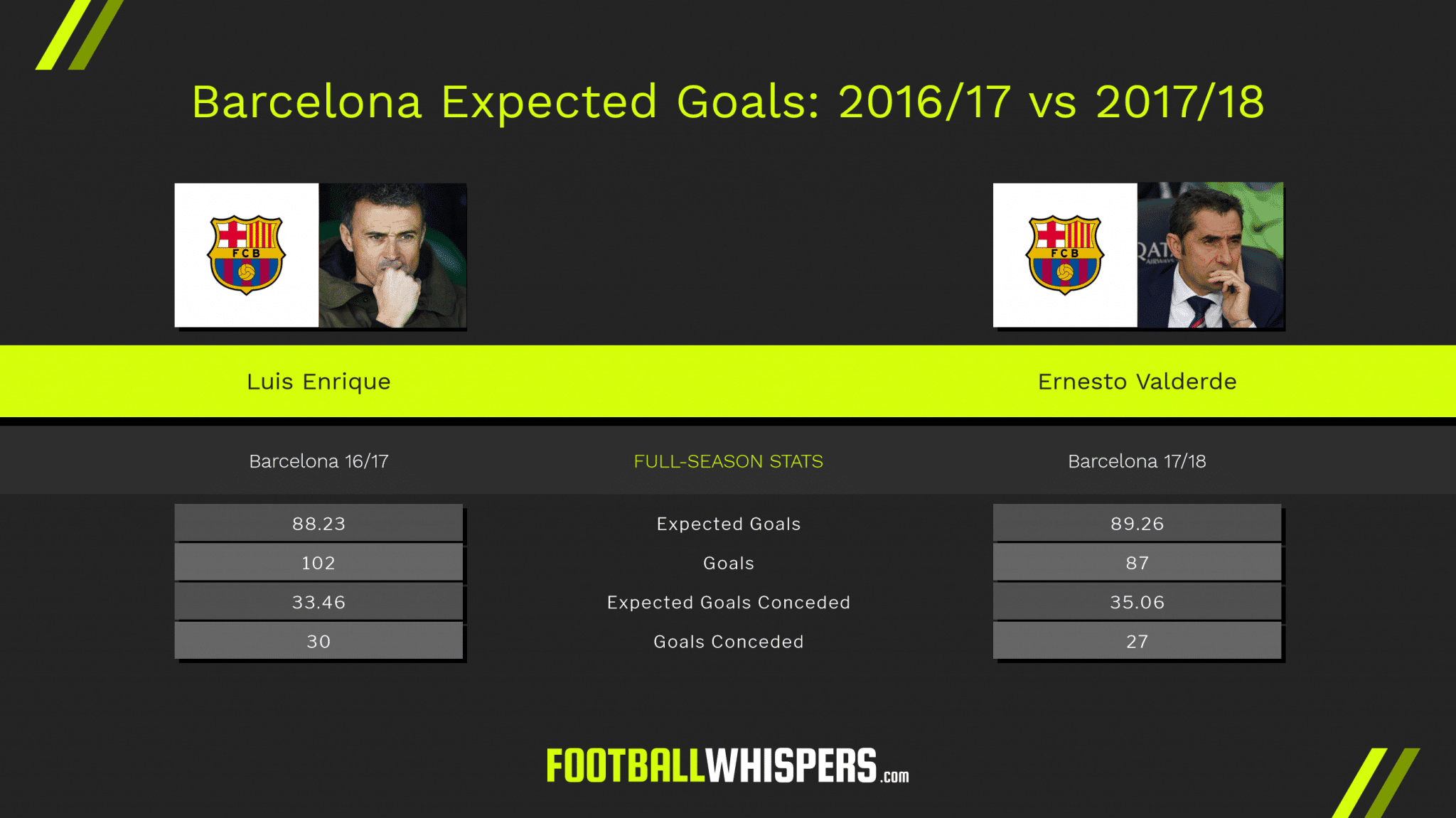 Taking both sides of the ball into account, Barcelona out-performed their xG by over seventeen goals in 2016/17; this season it’s down to just under six.

Because xG models can’t capture absolutely everything, the truly elite teams like Barcelona are always likely to score a few more goals than the numbers suggest and concede a few fewer.

An over-performance of seventeen, though, is a little much to be keeping up year-to-year. In hindsight, it seems inevitable that Barca would look worse this season than last just because of the rub of the green and the way a couple of lucky bounces fall.

However, there are some slight stylistic changes that Ernesto Valverde has overseen compared to 2016/17 under Luis Enrique.

The two sides are broadly similar, still falling within the same umbrella of a Barcelona system that’s principally characterised by keeping possession of the ball.

However, Valverde’s team is slightly less prone to fast attacks, which can be a particularly dangerous (and entertaining) way of creating chances.

This 2017/18 side are also defending deeper than last year’s, which may cause issues with Barcelona fans for two reasons. Not only is it a departure from the high-pressing style the Catalan club are so strongly tied to, but intentionally defending deeper can also make teams look vulnerable simply by allowing opponents closer to goal. 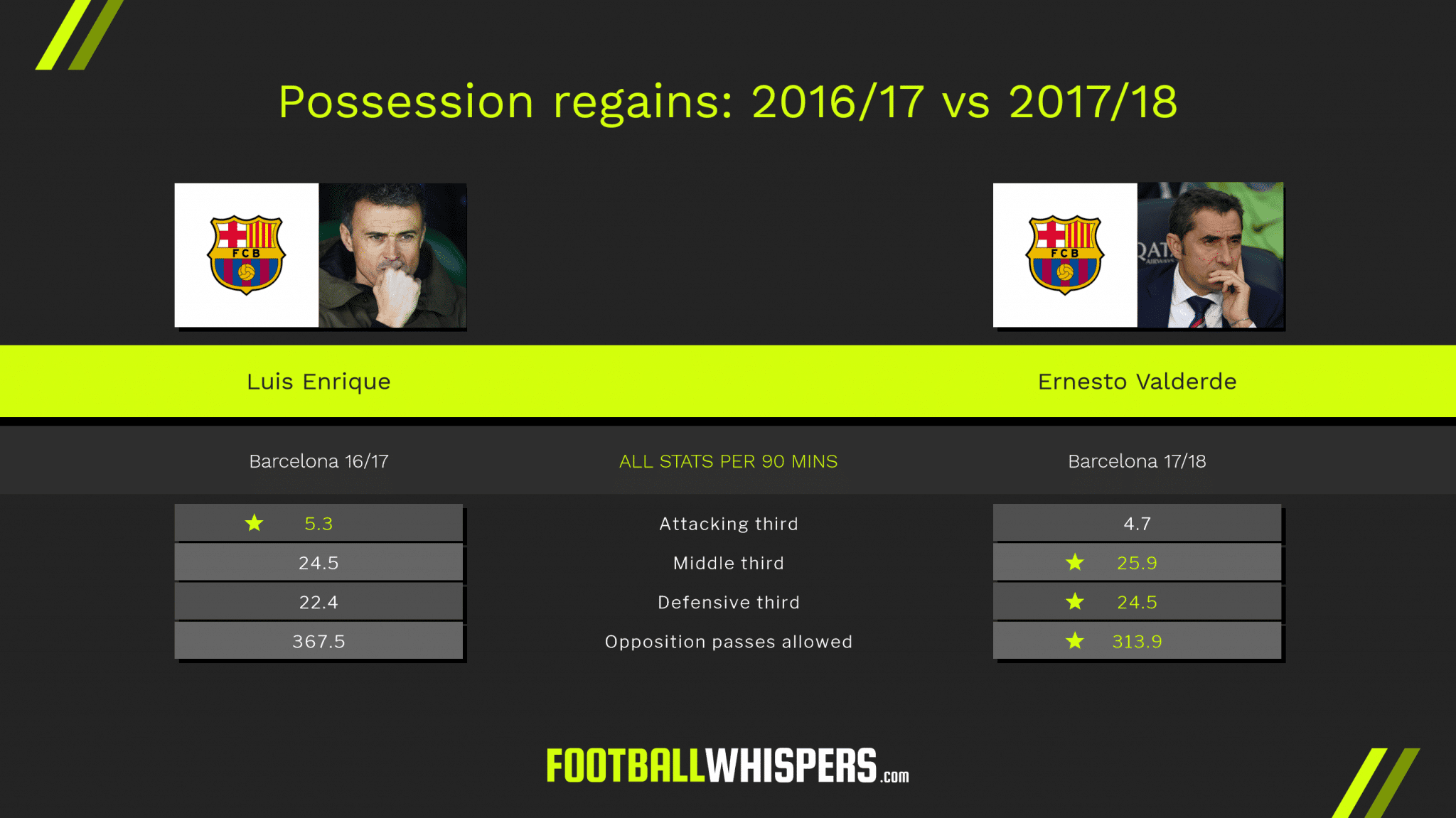 The number of defensive actions that Barcelona are making is similar this season to last – and they’re actually allowing their opponents fewer passes as well – but these possession regains are just happening closer to their own goal.

Looking at the difference between a team’s Expected Goals in different models can suggest things about the chances they are getting.

If a team’s xG numbers are much higher in a ‘post-shot’ model compared to a model that doesn’t take shot placement into account, then it could be the case that many of these chances came under little pressure.

Top-level footballers are all technically good enough to be able to pick out the corners of the goal when they’re under little or no pressure. However, this defensive pressure is one of the things that most xG models can’t directly take into account (although they pick up on it indirectly to some extent).

This season, the increase was just 6.8, and this difference is an interesting point to note. It could be that Valverde’s side has created fewer chances where the shooter is wide open under no pressure. This could, in turn, imply that they’re failing to pull their opponents all over the place to create pockets of space like Luis Enrique’s side were able to do.

They’re still obviously creating chances, that much is clear from the overall xG numbers. However, it could be just another reason why – watching the team in matches – they seem less impressive than preceding iterations of Barcelona.