Who are the hottest prospects in FIFA 17 and can you put together all of the very best ones into one team? Football Whispers are here to help and pick them for you, but be warned, some of them won’t come cheaply. 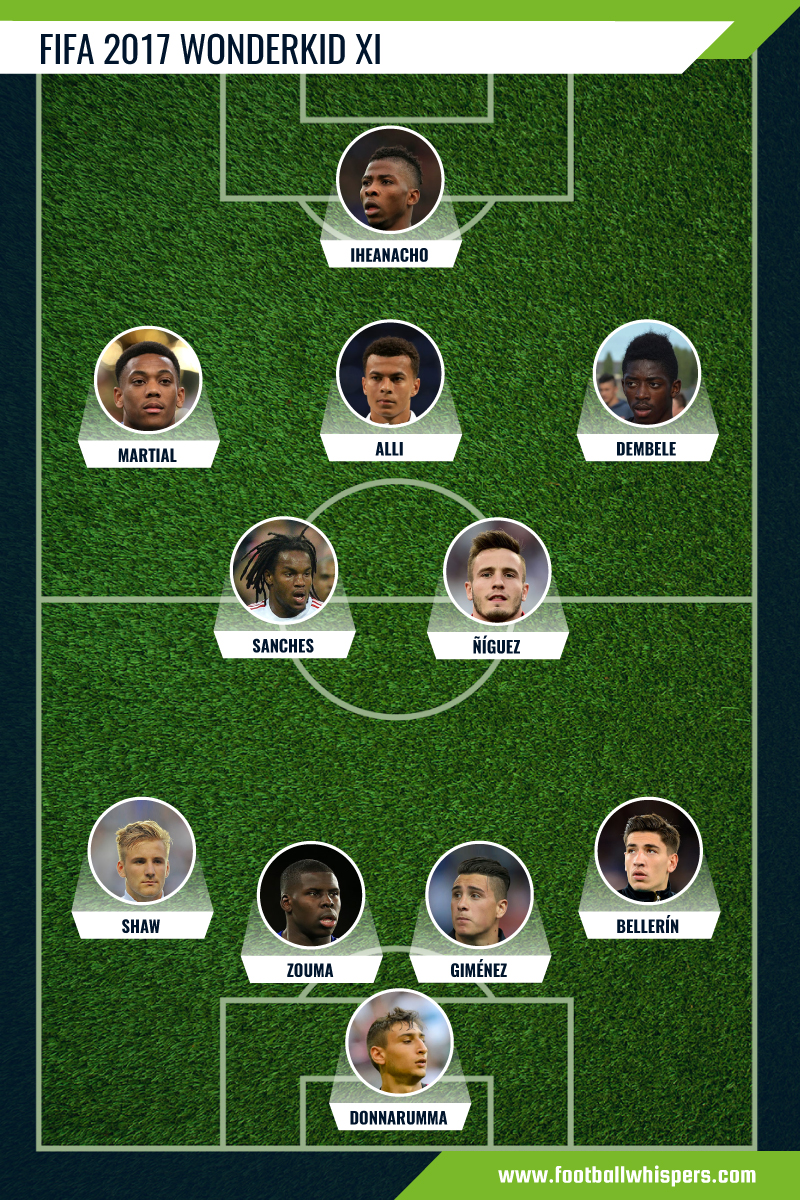 Widely considered as the heir of the legendary Juventus goalkeeper Gianluigi Buffon since making a debut for Milan in the previous season, Donnarumma’s meteoric rise has been well noted and recognized by EA Sports too. His ratings have been significantly increased for this year’s edition and are starting at 77, but with your proper guidance, the 17-year-old Italian shot-stopper could reach the overall of 88. The Italian club will be buried with offers for Donnarumma in the future and you should do the same in the game.

No, that is not Usain Bolt in FIFA 17, it is Hector Bellerin – the fastest man in the Premier League and as we all know the pace has always been the most important part of FIFA gameplay which makes the Spaniard an incredible asset of your team. The Gunners’ full-back has decent passing and crossing attributes and is not a bad defender too. His current ratings are at 79 and could come up to 87.

Shaw had some rough time in real life as he was sidelined for a long period after he broke his leg in a Champions League match last season. He successfully recovered and showed little ill-effects of his horrific injury but it seems that newly-appointed Manchester United boss Jose Mourinho doesn’t appreciate him very much. In FIFA he is also injury prone but is certainly one of the better young defenders with the starting overall of 81 and with a little time and work invested he can reach 89 rating. His defensive attributes are all above 80 and is quite pacey too.

Gimenez might be losing his place in the starting lineup at Atletico Madrid this season due to the presence of Diego Godin and Stefan Savic, but he is a must buy for your team and would  be a key player in your defense. He’s a bit slow and not tall but his current overall is 83. All of his defensive attributes are already high and the Uruguayan can develop further and make it up to 88 rating. It might be difficult to lure him out of Spain in the first season, but you should definitely be persistent in trying to obtain him.

Antonio Conte will be undoubtedly pleased that Kurt Zouma is recovering from an ACL injury he suffered last season and every Blues fan is eagerly anticipating seeing if the young Frenchman can further boost their already formidable defense. In FIFA 17 Zouma’s ratings haven’t declined because of the injury and are currently at 80, but he is the only under-21 centre-back in the game that can upgrade his skills immensely and reach 89 rating. If you play long enough you can actually witness Zouma becoming a real monster at the back of your defense and with a maximum 99 ‘Sprint Speed’.

What a year it has been for Renato Sanches! After playing his first professional season in career at Benfica, the teenager agreed to make a switch to Bayern, then won the European Championship in France with Portugal where he was named as the best young player of the tournament and the ‘Golden Boy’ award soon followed. On top of that he is now a central-midfielder with the biggest potential in FIFA 17 with current overall of 78 with the possibility of reaching 90. Sanches has a great engine and a shot from distance in the game. In just a few seasons his ball control and passing stats can go well above 80 and his ‘reactions’ over 90.

Another Atletico Madrid player on this list, Saul is best known in reality for causing havoc in Bayern Munich’s defense in a Champions League semi-final last season after he dribbled past several of their players and finished the move with a brilliant goal. In FIFA 17 he is a very versatile player capable of playing anywhere in the midfield and further up front. He’s current overall is 80 and could be raised to 88 after some time. The 21-year-old Spaniard has many attributes already above 80 while his defensive stats are also decent and makes me him a great all-round midfielder for your team.

A player of astounding flair and skill set, Dembele was a target of many top clubs across Europe but he finally opted for a transfer to Dortmund this past summer and is already making a name for himself in Germany. The 19-year-old Frenchman is renowned for his pace and dribbling and can be used on a few positions in offense. He’s potential overall is 90 while at the start of the game it is 78. With the former Rennes player in your team you will feel like a cheater when he reaches his full potential.

Anthony Martial is oftentimes likened to Thierry Henry due to their similar style of play and talent. Will he ever match the achievements of an Arsenal icon we will find out in the future, but for he is your best player in this team with the current rating of 82. The fleed-footed winger can give you an immediate advantage over your opponents if you capitalize on his speed, dribbling and excellent movement attributes. He already has several game specialties such as: ‘Speedster’, ‘Dribbler’ and ‘Acrobat’. His potential overall is 90. Another positive is that you can use him in different positions on the pitch too.

Dele Alli took Premier League by storm last season with his performances which helped Tottenham reach the third place in the league at the end of the season. He was named PFA young player of the season and found his place in the PFA’s team of the season and it was only natural that EA also reward him in FIFA too. His current overall is 80 but can rise up to amazing 90 if he is nurtured properly. Bright future awaits the English international both in the game and in reality. Grab him if you can, you won’t regret it.

Not just the red part of Manchester has talented teenagers in their ranks as the blue one can boast with some of them too and Kelechi Iheanacho is certainly one of those players. The 19-year-old Nigerian is a backup for Sergio Aguero at Manchester City but he rarely misses an opportunity to shine whenever he is given a chance on the field and has scored some important goals for the Citizens last season. With 79 overall at the moment and with his ‘Finesse Shot’ and admirable pace you can already cause a lot of damage with Iheanacho leading your attack. Just imagine what you can do if he reaches his potential 89 rating.