There’s no denying that FIFA is always a hit with gamers. Each and every year a new FIFA game gets released, and it seems that the games just get better and better, with more features, improved graphics, and much more. But while this is something that many gamers know, there aren’t many that stop and think about what grounds are the best to play at. As it happens, the FIFA 21 grounds that are available are completely different from what we saw with FIFA 20, and we have no doubts that these grounds will be different once again for FIFA 2022.

Regardless, right now we’d like to focus on the top FIFA 21 stadiums, focusing on the realism of the graphics, which teams play at these stadiums, as well as what these stadiums consist of in real life. So, without wasting any more time, let’s get started with some of our favourites for FIFA 21.

There are a whole bunch of stadiums listed in the FIFA 21 game, but unless you are playing a straight-up one-on-one match with a friend, you might not always come across them. This is especially true if you are playing online or in career mode, which are just some of the reasons that we feel it’s necessary to draw attention to the top FIFA 21 grounds on this game. If you’ve been playing the game since it came out in October 2020, you may have seen these grounds already, but if not, some of this information will be particularly interesting. 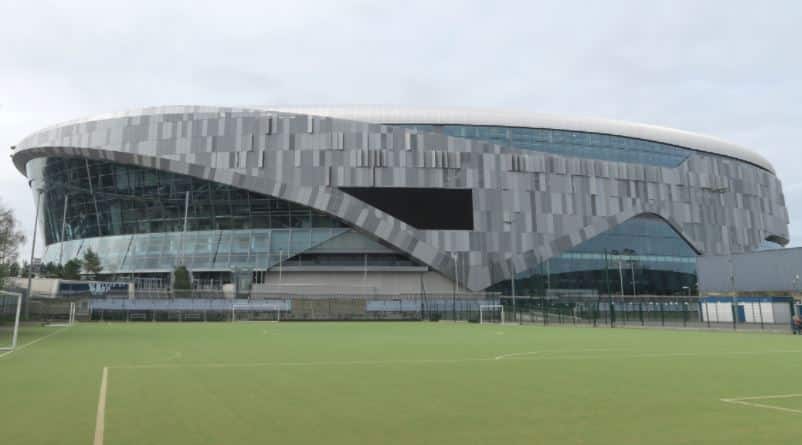 As the largest stadium in London, it’s impossible not to list this one as one of the very best stadiums in FIFA 21. In fact, not only is the Tottenham Hotspur Stadium the largest in London, it’s actually the third-largest in the entire country – behind only Wembley and Old Trafford. With a seating capacity North of 62,000, it’s no wonder that the noise seems to be a little louder than usual when you play at this stadium in the game. To be fair to the game designers, they have even managed to incorporate the dividing-pitch which is used in real-life, of course, since the stadium is used for NFL when major teams come to town. It’s quite cool that this stadium wasn’t listed on any FIFA game up until 2020 too, since it wasn’t constructed until 2019.

As you can no doubt guess from the name, the only games that take place here in FIFA 21 are games involving Tottenham Hotspur. And as the game pans around the stadium before kick-off, you get a true sense of the scale and size of this stadium. Then again, would you expect anything less from a stadium that cost £1 billion to build?

One can’t help but feel that FIFA 21 just wouldn’t be the same without Old Trafford. Not only is this terrific stadium more than 100 years old, but it is also the largest in the entire Premier League, with a capacity above 74,000. There is something truly special about Old Trafford, both in the game and in real life, which is no doubt why it was nicknamed ‘The Theater of Dreams’ by none other than Sir Bobby Charlton. Of course, Old Trafford hosts all games involving Manchester United in 2021, and each and every time you play a game at this place, you really are walking in the footsteps of true legends of football. Guys like David Beckham, Bobby Charlton, Cristiano Ronaldo, and the most successful manager of all time – Sir Alex Ferguson, have all graced Old Trafford with their presence.

So as far as FIFA 21 grounds go, it’s tough to think of many better than Old Trafford. It’s also super cool that when you start a game, you get a nice overhead shot of the ground, showing this sacred stadium from an aerial perspective. This always makes the hairs on the back of your neck stand up, so Old Trafford really deserves its spot on the list.

Speaking of holy football grounds, Parc des Princes is another extraordinary stadium that can be played in through FIFA 21. This one is home to one of the best teams in Europe at the time of writing, Paris St Germain. As you may already know, this stadium is nestled in one of the more appealing cities in Europe – Paris, and when you play a game in this stadium within FIFA 21, you even get a sense of French culture to accompany your gaming excitement. Having undergone several major renovations, the most recent Parc des Princes (the one we see today) has only been listed on a few previous FIFA versions, so it makes this one somewhat exclusive too. If you start a season with PSG in the game, you will enjoy this stadium for all home games, but if not, this one will be kept in reserve for blockbuster Champions League showdowns.

Concerning some actual facts for Parc des Princes in real life, it was first opened back in 1972 for the cost of 150 million Francs – if you can remember back to this currency! And since inception, this one has played host to World Cup games, Euro ties, and many Champions League games.

The reason this is one of our favourite FIFA 21 stadiums is that it is brand new to the game (at least with its current version), and it is also super relevant with the upcoming Champions League final due to be played there. Being based in Turkey, unless you are playing a season in the Turkish League, you won’t usually come across this one, which makes it all the more exclusive. Now, with more than 75,000 fans allowed at full capacity, this stadium is truly a sight to behold, and the graphics for this one are impeccable on the game. It’s pretty cool that if you do make it to the Champions League final in your opening season, this is where you’ll play too!

As for the statistics surrounding the appeal of this stadium, it cost around $140 million to build back in 2002, and it was initially going to be used for the 2008 Olympics. Obviously, this never materialized since China won the Olympics bid, but it’s good to see that the stadium is now able to host such large competitions like the Champions League final. And as it happens, the Ataturk Olympic Stadium might get some use for Euro 2024, although this isn’t yet confirmed.

Now let’s jump over to Spain for one of the best stadiums not only in Europe, but anywhere in the world. The Santiago Bernabeu plays home to Real Madrid, a team with one of the largest followings of any European side – no wonder it seems so loud when you play a game there in FIFA 21! This stadium rivals one of the most famous in the world too – Camp Nou. And as a fun fact for you, you won’t be able to play any games at Camp Nou in FIFA 21, as EA Sports doesn’t have the licensing rights. This means that the Santiago Bernabeu is without question the best of all FIFA 21 grounds in Spain, and given that recent renovations have taken place, the exact stadium layout of this one for FIFA 21 is truly unique.

Needless to say, this is a pretty cool stadium to play a number of games in FIFA 21, which can be done if you choose to manage Real Madrid right off the bat. And with over 80,000 allowed at full capacity in real life, it’s quite cool that this is also one of the largest stadiums in Europe, which is the perfect cherry on top.

If you’re reading this from the UK, it’s likely that Wembley Stadium won’t need much of an introduction for you. Of course, Wembley Stadium is the largest stadium in the UK, with a maximum capacity of 90,000. This holy ground has played host to Champions League games, numerous FA sanctioned games, playoff games for multiple English-football leagues, and so much more. In FIFA 21, most of the main England games are played here too, especially for the Euro’s and World Cup matches. The stadium itself really is a spectacle, although it did come with a cool price tag of approximately £789 million – making Wembley one of the more expensive stadiums in FIFA 21 too.

To really get a sense of the quality of this stadium, it’s quite cool that you catch a glimpse of it when taking goal-kicks, after scoring a goal, and when the camera is honing in on Wembley before the game kicks off too. Even if you’ve never physically visited this venue before, FIFA 21 provides you with a real sense of why Wembley is viewed as one of the top stadiums in the world. It’s all the more exclusive given that you can’t play regular-season games at Wembley in the game too, so if you want the privilege of playing here, you have to make it far in major competitions.

At the time of writing, San Siro is the home of two major Italian teams – AC Milan and Inter Milan. It’s a bit strange to think that FIFA 21 teams that are so competitive with one another actually share a stadium, but hey, that’s how things are currently set up. San Siro is actually one of the biggest stadiums in Europe with a seating capacity of more than 80,000, and this also means that it is the single largest stadium in Italy. Should you play FIFA 21 with either Inter or AC Milan, you will get to play football in San Siro, and what makes this stadium especially cool is that it has hosted World Cup games, Euro Championship Games, Champions League games, and even Olympic Games too. As you can see, there isn’t a whole load of action that San Siro hasn’t been exposed to over the years.

Since the pitch is actually made of hybrid grass too, FIFA 21 even seems a little different when you play games here compared with elsewhere – or perhaps it’s just us! Regardless, San Siro is an awesome stadium to play at, making it one of our favourite FIFA 21 stadiums.

Last but not least, we’d like to quickly talk about Wanda Metropolitano – a stadium that is the home of Atletico Madrid. With that said, this one has only been the home of Atletico Madrid since the 2017-2018 season, meaning that the current version you see on FIFA 21 has only been in existence for a few years, since it was also renovated in that same year. This is why Wanda Metropolitano has quite a modern appearance in the game, and to be fair, this one has seen its fair share of important football games over the years. Besides the home games that Atletico Madrid play, this stadium has witnessed Copa Del Rey finals, Champions League action, and more recently, it hosted an international game between Spain and Argentina.

But perhaps most relevant, and most prestigious of them all in recent times – Wanda Metropolitano was the host of the 2019 Champions League final involving Liverpool and Tottenham. Obviously, stadiums don’t get to host these kinds of events without being rather special, and the development team behind FIFA 21 have truly captured the characteristics of Wanda Metropolitano.

We hope you’ve enjoyed learning about the various FIFA 21 grounds that rank highly on our list, and if you haven’t yet checked them out on the game, make sure you do so. Even if you have to go through the quick play mode to play a game in these stadiums, it’s well worth it – just to feel the special atmosphere that so many of these stadiums possess.