Pep Guardiola’s love of basketball is well-known and the Catalan's adaptation of five-on-five tactics to the final third of a football field has been covered extensively.

Like any sport, basketball has evolved and the game today is very different from the one of the 1960s or even 2000s.

However, one truism has remained and that is the importance of the point guard. The primary passer and creator and the best ones are always the coach’s ears and eyes on court. They are the first point of contact in terms of possession and they dictate the tempo.

The greats have always tended to match such a creative vision with tenacity in defence, snapping at opposing players, constantly imposing pressure and forcing mistakes before being there to brag the ball and launch a counter.

It’s no surprise, then, that for all the attacking gems he’s worked with down the years, some of Guardiola’s most important players have been essentially variations of a point guard on a football field: .

The Brazilian has been a hugely influential player under Guardiola and while you can argue the merits of Kevin De Bruyne as the romantic idea of a point guard, he isn't as defensively sound.

Already this campaign, only Aymeric Laporte and goalkeeper Ederson can match his 540 minutes for the club across the Premier League and Champions League and under Guardiola, among outfield players, he’s been third in both seasons in terms of total domestic minutes (2,755 and 2,885).

In 2017/18 he led the league for accurate passes with 83.57 per 90 and, as per understat.com, was only marginally second to De Bruyne in xG buildup (total possessions involving a player leading to a goalscoring chance) with 22.24, the Belgian’s figure was 22.90.

Positionally he is among the best in the world at being a consistently open passing option for his teammates. Defensively, without being a voracious tackler, he presses and limits areas for the opposition like few others.

But City have a problem with Fernandinho which threatens to bite them come the latter months of the season. The Brazilian is now 33 and all those miles on the clock are surely going to start to take a toll. 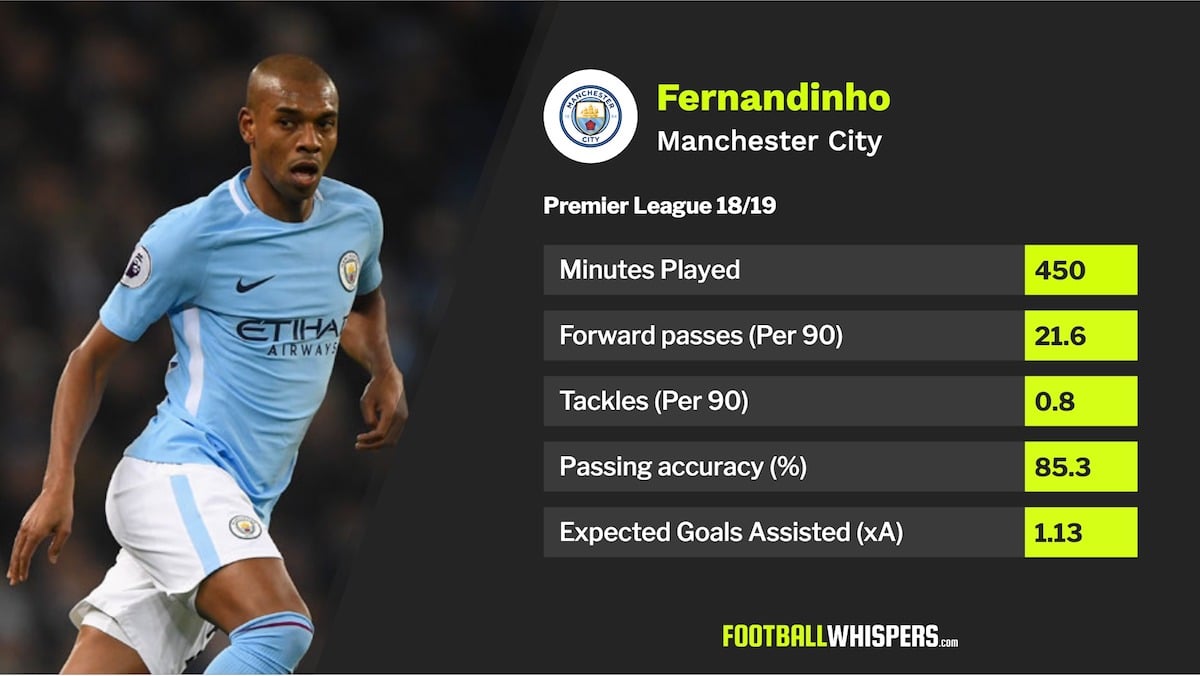 There is some evidence to point towards this already happening with his passes per 90 this season at just 60.8, although can also be attributed to City’s overall collective passing falling from 661.63 per game last season to 620.8. Is he the cause or effect of that?

His pass accuracy has shown a definite drop, though, from 90 per cent in the Premier League to 85.3. It may be too early to tell but that 4.7 per cent of possession lost on his watch could prove significant should it continue.

The Champions League can be a great barometer of both a team’s talents and its flaws and City’s 2-1 loss to Lyon should give Guardiola plenty to mull over, beyond being just a question of attitude and complacency seeping in.

Houssem Aouar had a seventh-minute opportunity in which he drifted inside Fernandinho, brushing off his challenge, before drilling a shot wide of the near post. Worse was to come as he misplaced a pass on halfway in the build-up to Maxwel Cornet’s opening goal.

Just over 10 minutes later he was overmatched in midfield, tackled by Pape Cheikh and then Nabil Fekir shot wide. The France international then robbed the Brazilian of possession before playing a one-two with Memphis Depay for the decisive second goal.

There was a collective failure and to highlight Fernandinho’s mistakes seems a touch unfair given how proficient he is from week-to-week but, however marginal, any drop in performance is notable when playing for the Premier League champions.

If City are to win the Premier League, compete in the FA Cup and EFL Cup and go deep in the Champions League then Fernandinho, given his influence and how much better they are with him in the team, will be expected to play 40-45 games, potentially more.

The last part is pertinent because, for all their resources and wealth of talent across multiple positions, City don’t have an obvious deputy for the Brazilian.

Ilkay Gündoğan can play there; he is a fine passer and creator and also provides a little more sprint offensively but isn’t at the same level defensively. Beyond the Germany international, Guardiola is into the realms of experimentation with John Stones or possibly Laporte.

They could work on a five-to-ten game basis to help manage Fernandinho’s minutes as the fixtures mount, although something so radical will surely have to be trialled sooner rather than later, unless they win the Premier League by April again. Although with Liverpool and Chelsea looking so competitive, that appears unlikely this time around.

It’s this set of circumstances which led to Fred and, to an even greater extent, Jorginho being pursued through the summer but neither transfer materialised. And the problem is, both are now playing for Premier League rivals so there is no opportunity to revive any deals.

Guardiola has shown himself to be open to bringing in significant mid-season reinforcements during his time at City with Gabriel Jesus and Laporte arriving in January in consecutive years and playing important roles down the stretch.

There is a scenario in which Fernandinho and Gündoğan share the volume of games, supplemented by a third player in cup competitions and the odd league fixture, but it all seems rather risky and potentially damaging should, come April, the Brazilian not be at 100 per cent for a Champions League tie at the Bernabeu, Camp Nou or Juventus Stadium.

The attempts to bring Fred and Jorginho also mean that Guardiola isn’t going to forget about the hole in his squad, he’ll want it filled as soon as possible.

Fortunately, options are plentiful due to the importance of defensive pivots with Borussia Dortmund’s

However, unlike Jesus and Laporte who were additions made with one eye on the campaigns to follow, it looks like any midfield additions in the new year will be made out of necessity for the present as well as the future.