When Bayern Munich captain Philipp Lahm surprisingly announced back in February that he would retire from professional football at the conclusion of the current season, the tributes poured in from all four corners of the football world. Among those eulogising was Manchester City manager, Pep Guardiola, who managed the now former Germany international during his three seasons at Bayern.

“He is one of the most fantastic players I have ever trained in my life,” he told a news conference.

“Even talking about the most intelligent players, he is one of them. Football is going to miss one of the best players I have ever seen. He can play in 10 positions, no problem, because he understands the game perfectly.”

High praise, indeed. At City, meanwhile, Fernandinho has come in for similar high praise this season as a result of demonstrating his own intelligence under the Spaniard's tenure. Lahm, a full-back by trade, was deployed in various midfield roles by Guardiola, while the Brazilian, naturally a midfielder, has seen himself deployed in both full-back roles.

Asked last October, when City had won their first six games of the league season, why he had utilised Fernandinho in so many different ways, Guardiola told English newspapers: “That is because Fernandinho can do everything. What we have achieved so far would have been impossible without him. He is fast, he is intelligent, strong in the air, and he can play in several positions.

“No sooner does he see a space than he runs there immediately. If you need someone to make a correction or a challenge, he sees it too. If a team had three Fernandinhos, they would be champions. We only have one and he is very important to us.”

Again, high praise indeed from the Spaniard. Fernandinho, meanwhile, has relished being used in unfamiliar positions because he understands the value of versatility.

“I think left-back is the fourth different role I've had this season,” he told the Citizens' official website following their 2-0 win away to Bournemouth back in February.

“It's a different experience, but very good and interesting. I liked it a lot. The most important thing is to be available to help the team the best way possible.

“Since Pep arrived here he was clear about the fact that he likes to use players in different positions and he made some tests and in the last game when I ended up playing on the right-hand side. Against Bournemouth I played on the left. It’s one of his ideas of the game. We tried to implement it and I think this is a very important aspect and quality to have.

“To be able to adjust in different positions and try to keep a good rhythm during the match and help the team to win is good for the whole team and as individuals because we broaden our own experience. If there’s a situation where we have to slot in somewhere else, we may already know that role well.”

Though obviously not a natural, Fernandinho has shown that he can do a job in both full-back roles, although he has only started in either position on just two occasions each thus far. At left-back, he admittedly struggled in the 5-3 blockbuster victory over Monaco at the Etihad Stadium in the Champions League given the quality of the opposition, but he turned in a standout performance in the aforementioned win away to Bournemouth prior to that.

City dominated possession, hogging the ball for 62 percent of the game as they pegged the hosts back. This gave Fernandinho the chance to run riot as he used his dynamism to turn in a true all-action display.

A huge 49 percent of City's attacks that day came down the left-hand side, as the Brazilian struck up a fine connection with David Silva just ahead of him, one of the league's most gifted playmakers. In fact, Fernandinho to Silva (19) and Silva to Fernandinho (18) were the top two passing combinations in the game.

On his own, meanwhile, Fernandinho completed the fourth-most passes (57) of all players on the pitch, 21 of which were in the attacking third. Only team-mates Silva (34) and Kevin De Bruyne (30) completed more. He also created the joint-most chances in the game, showing just how heavily involved he was in what his team produced up front.

At the same time, he did not neglect his defensive responsibilities, though he was hardly put on the back foot. He completed the joint most tackles (6), made six ball recoveries (the game-high total was eight), and made five clearances.

At right-back, he played well at home in City's 1-1 draw with Liverpool. He didn't see as much of the ball as he did at Bournemouth as City focused their attacks down the opposite flank. Given Liverpool's attacking quality, he needed to be focused defensively as he was directly up against his compatriot Coutinho who, though not at top form at the time, could not have been underestimated.

Fernandinho performed ably, however, completing the second-most tackles (5) and making the joint-most interceptions (5) as Coutinho failed to do anything of note, leading to him being subbed with almost 15 minutes to go.

In his primary position in the middle of the field Fernandinho, with his dynamism and robustness, has without a doubt been one of City's standout players this season.

“I think Fernandinho's one of the best holding midfielders I've ever played with,” said De Bruyne at the end of January as he welcomed back the Brazilian from the ban he served following his red card in the 2-1 win over Burnley earlier that month.

“And it's worth remembering that he's 30 years-old – incredible that he has so much energy – you don't see that everywhere in players who are 30 so we are very lucky to have him.” 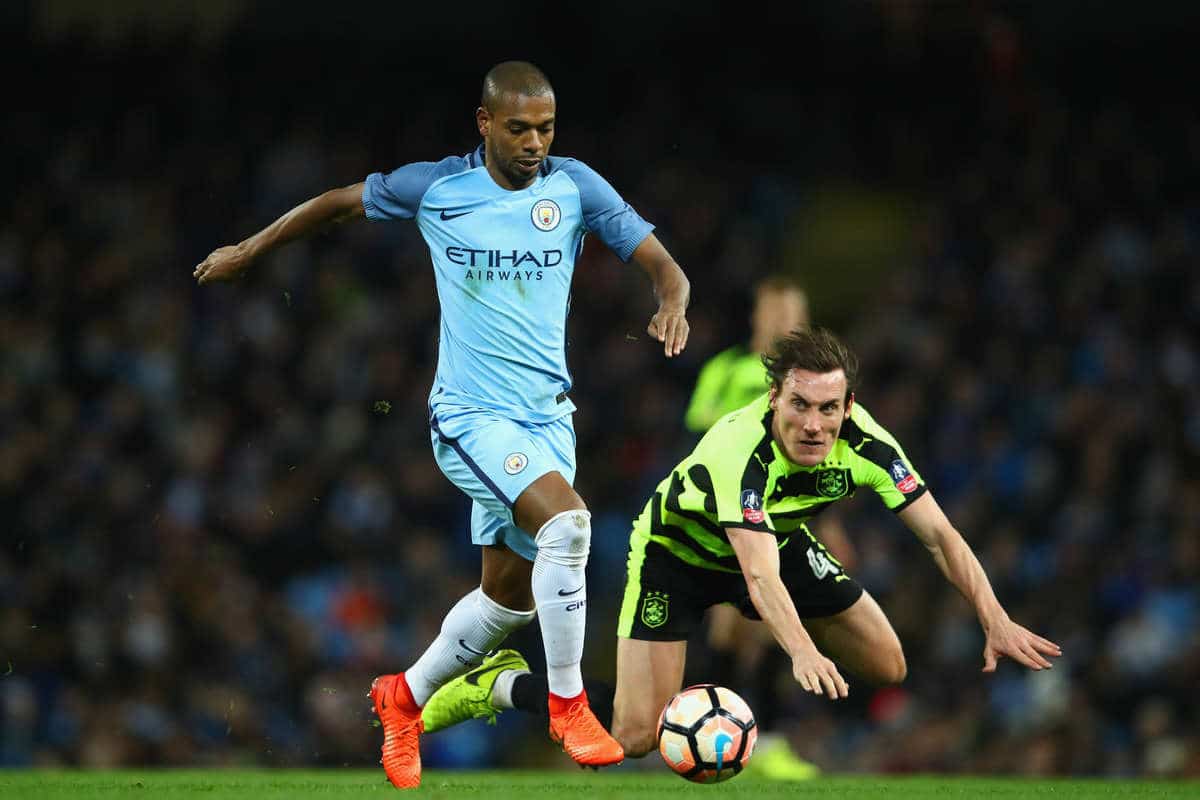 Noteworthy, indeed. Among midfielders, Fernandinho ranks 10th for interceptions made (50) and 13th for clearances made (47). On the ball, meanwhile, he has also proven to be reliable, which is an absolute must if he is to be a mainstay in a Pep Guardiola team.

He tends to keep his distribution short and simple to help his side retain possession, to afford the more creative midfielders like Silva and De Bruyne the opportunity they need to influence the attack, and to allow the likes of the pacey Leroy Sané and Raheem Sterling to get on the ball and run at their opponents down the flanks, just as Guardiola demands.

Among midfielders, he has completed the seventh-most passes in the league (1,354), a very respectable 86 percent of all he attempted. Only Silva (1,413) has completed more. As the numbers prove, Fernandinho really is a key component of this City side.

That said, he has to make sure he stays on the pitch to exert his huge influence. He has missed several games this season as a result of poor discipline, collecting three red cards, all of which incredibly came in the space of six games.

He has to learn to prevent the red mist from descending, to keep himself in check, especially at tense moments. Given the problem exists at his age, though, we should still expect to see him lose control from time to time. But Guardiola will still love him.

Fernandinho was not looked upon favourably when he first arrived at the club because of how his compatriots before him had fared, but that perception has surely changed now.