After seeing an exciting first leg, we also hope to see an interesting rematch in the Ferencvaros vs Young Boys matchup in the final playoff round of the Champions League Qualifiers. So, check our preview of this match to learn more about it.

Our best free betting predictions for Ferencvaros vs Young Boys

If you are not sure what is the best bet for Ferencvaros vs Young Boys, check some of our favourite tips for this match:

Many were surprised by the result in the first leg despite the fact that Young Boys ultimately won the game 3-2. However, Ferensvaros fought hard and they showed that they are not in the final stages of the qualifiers for nothing. Still, Young Boys is the better team of the team and our prediction is for them to win the second leg as well.

We've seen both teams score twice in the first leg between Ferencvaros and Young Boys and we expect to see the same in the second leg. The matchup is still completely open and Ferencvaros will have to risk a bit if they want to overcome the one-goal deficit from the first leg, which would open a lot of space for Young Boys. So, our next prediction is for both teams to score in this game.

Since we expect both teams to score in this match, we also expect to see at least three goals in the game. After all, we've seen five goals in the first leg between these two teams and both Ferencvaros and Young Boys are known for playing high-scoring matches, so this seems like a very reasonable prediction.

Top odds and stats for Ferencvaros vs Young Boys

The odds for Ferencvaros vs Young Boys can vary from one bookie to another, so we have chosen odds from the best UK bookies for you:

Not many people expected to see Ferencvaros in the Champions League playoffs, but the team is deservedly here after they eliminated Zalgiris and Slavia Prague in the previous rounds of the qualifiers. In any case, the team has three wins and two losses in the last five games in all competitions and they started the new season in the Hungarian league with one win and one loss. Dvali, Kharatin, Nguen, and Sigen will miss the Young Boys game due to injuries.

The Swiss team was the clear favourite in this matchup before it started, but their first-leg win wasn't as convincing as many of us expected it to be. Still, Young Boys travel to Budapest with a one-goal advantage and they have a good chance to reach the group stages of Champions League this season. In the Swiss league, Young Boys have started the new season with one win, one draw, and one loss. The team also has a bit of injury issues since they currently have six players on their injury list. 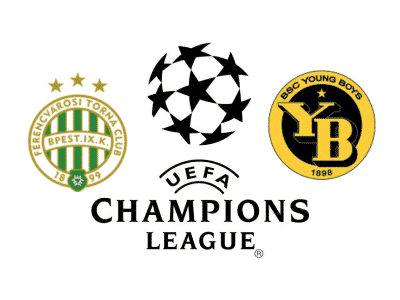