Watford defender Kiko Femenía's career suggests he is nothing if not adaptable. He was, until a year ago, a flying winger at La Liga surprise package Alavés, after all.

That was until el Glorioso issued the 26-year-old with an ultimatum: “They told me you play as a right-back or you don’t play with us anymore,” the now-Watford defender told the club's website recently.

Femenía did as he was instructed and soon found he was a natural in his new position. But with his contract up in the summer he swapped the Basque country for Hertfordshire, signing a four-year deal with the Hornets.

He has impressed at right-back for Marco Silva's side since making the switch, adapting seamlessly to the frenetic, full-throttle nature of Premier League football.

Femenía's willingness to run at defenders and pin-point deliveries have been features of his fine start to life in WD18 but he is not without his shortcomings.

“I knew already a little bit how to play there,” he said in the same interview. “I just had to learn the mechanisms. I’ve learned to chase back and how to defend better. Sometimes I go too much forward but I am learning all of the time.”

On that basis, Femenía is certainly self-aware. There is room for improvement – that much was clear in the 3-3 opening-day draw against Liverpool, a game which saw the former Spain Under-21 cap caught out on two goals.

With Watford leading 1-0, Femenía switched off for the Reds' equaliser. Sadio Mané (circled in red) escaped the attentions of Abdoulaye Doucouré and Nordin Amrabat and was allowed to move into space to play a one-two with Emre Can. 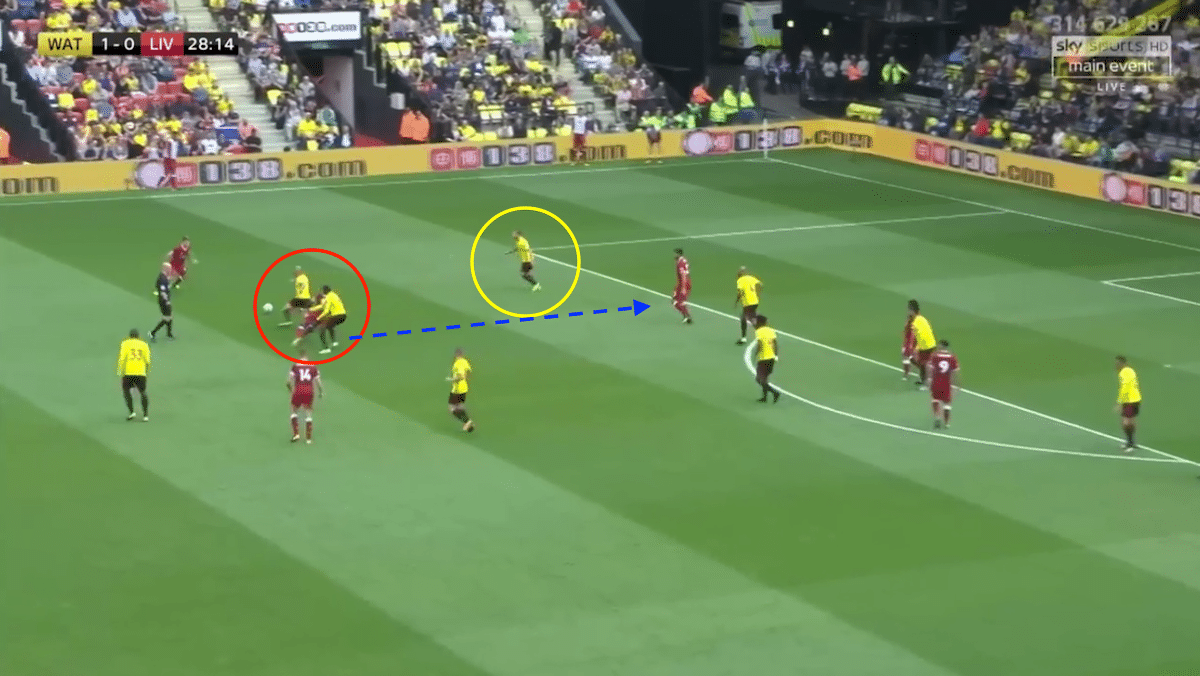 The Senegalese forward then burst through the gap between Femenía and Younes Kaboul and into the penalty area to curl past Heurelho Gomes and level the scores.

Mané is one of Liverpool's most dangerous forwards – if not their most – but Femenía was never alive to the danger in front of him. 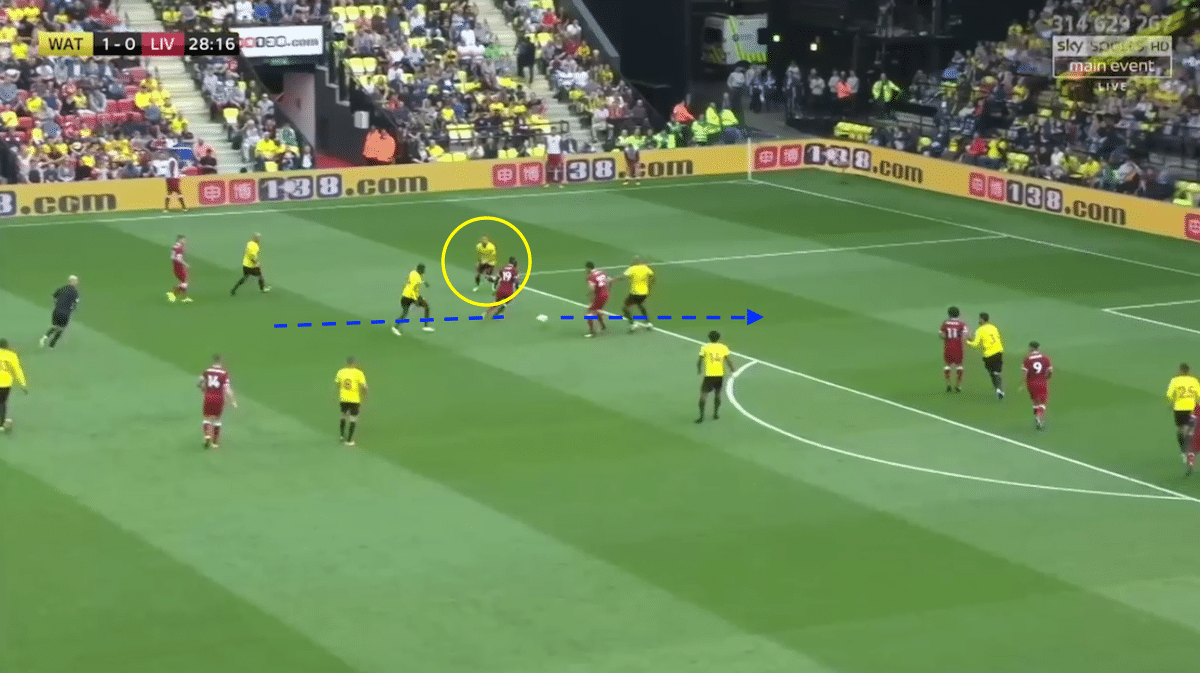 The former Barcelona and Real Madrid youngster did not cover himself in glory on Liverpool's third goal either. Again Can (out of picture) is the orchestrator,  lofting the ball forward from inside the visitors' half.

Watford's defensive line, as highlighted, is all over the place with Miguel Britos the deepest and playing Roberto Firmino (circled in red) onside. But, with the offside trap already broken, Femenía is caught on the hoof and unable to catch the Brazilian forward who lofts the ball over Gomes for debutant Mo Salah to score from point-blank range. 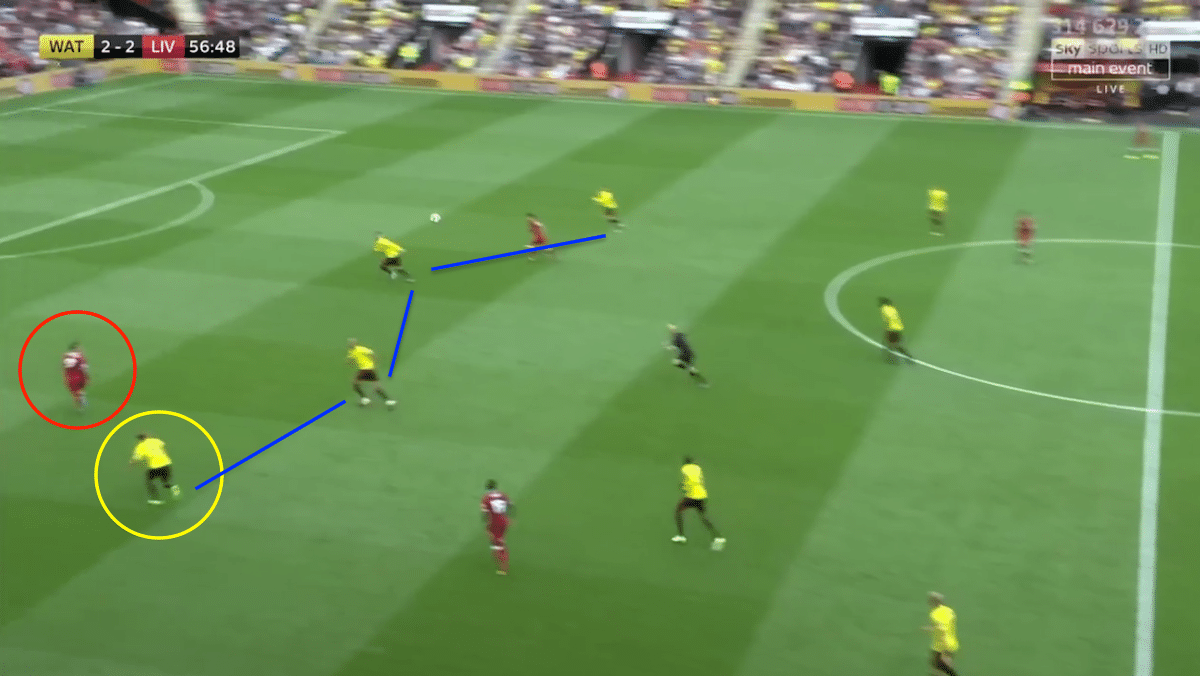 However, in mitigation, Watford's full-backs are expected to get high up the field and play as auxiliary wingers in Marco Silva's 4-2-3-1 system, especially as Richarlison and André Carrillo tend to play quite narrow.

That is clear in the 2-2 draw at West Bromwich Albion prior to the international break. The average positional map showed Richarlison, nominally the left-winger behind the centre-forward, playing furthest forward. That allowed left-back José Holebas (25) to buccaneer forward into the open space. 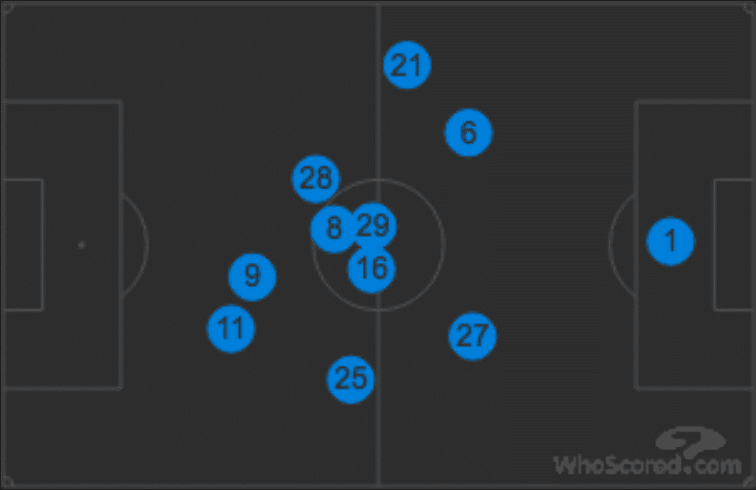 The same goes for the right-hand flank where Femenía (21) is, by some distance, the widest player for the Hornets with Carrillo (28) playing a much more central role despite being stationed on the right wing.

This, however, is very much by design. In Femenía and Holebas, Watford have two ultra-modern full-backs. Both are comfortable in possession, confident going forward and capable of providing chances for their team-mates.

So when Albion opened the scoring on the counter, it was little surprise to see Femenía stationed in support of Watford's attackers with Adrian Mariappa (6) and Christian Kabasele (27) left minding the shop. 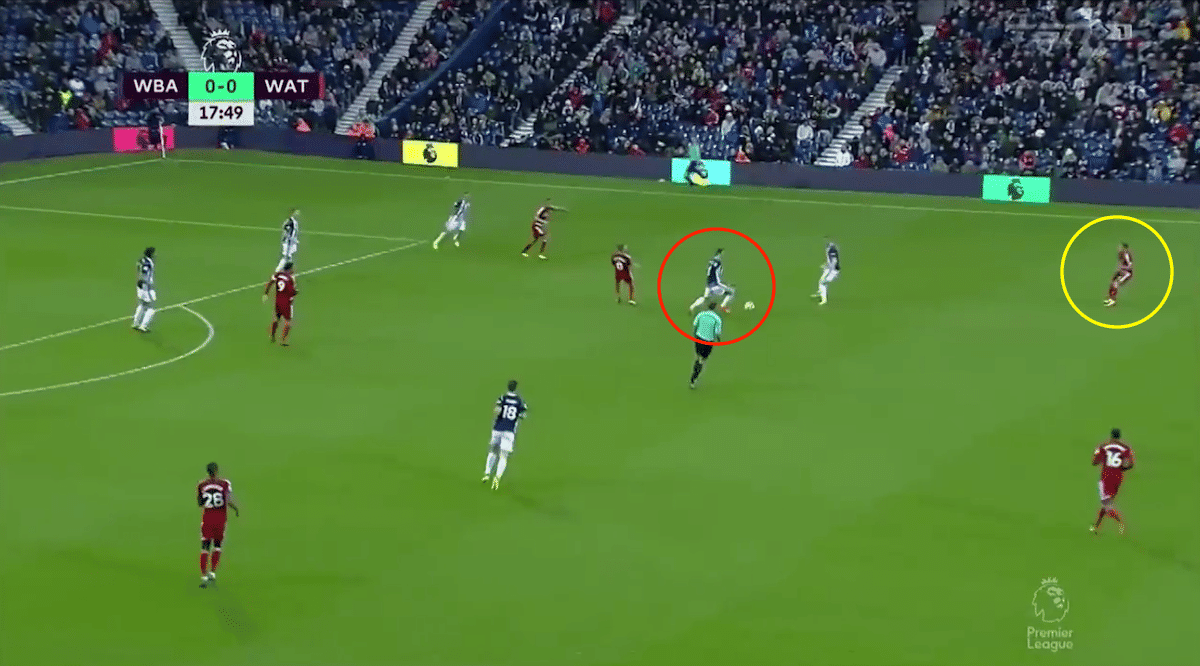 One quick ball over the top from Grzegorz Krychowiak was enough to release Salomón Rondón (circled below in yellow) and the Venezuelan powerhouse breezed past Kabasele to open the scoring for Tony Pulis' men. 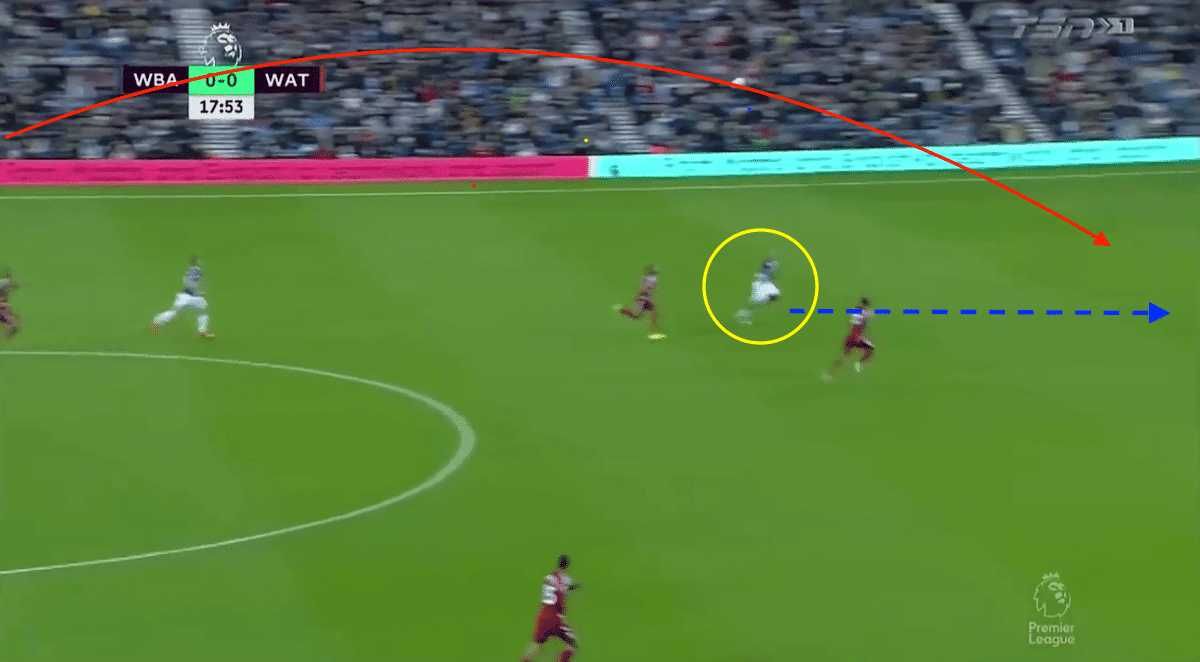 But it is something of a calculated gamble as the Spaniard fits Silva's tactical blueprint perfectly. The way the team set up, they will concede on the counter. It is unavoidable.

The 0.3 crosses Femenía supplies on average per game, Tom Cleverley on 0.6 – and 1.2 dribbles.

Crucially, Daryl Janmaat, Femenía's rival for the right-back spot, fails to get the better of him in either category. The Dutchman is level on crosses per game (0.3) but has yet to register a dribble in the Premier League this season.

The former Newcastle man can be similarly fallible when it comes to defending. However, the Dutch international simply does not offer the same threat as Femenía going forward.

It is worth noting that as well as being one of the team leaders in attacking metrics, Femenía also comes near the top of the charts for several defensive statistics too.

In terms of tackles per game he is third with 2.2. He is second to Janmaat for interceptions with 2.5 and just behind the Dutchman for blocks (0.2 per game v 0.7) as well.

It is little surprise, therefore, that Silva has favoured Femenía over Janmaat this season. His switch from winger to full-back has been almost seamless and if he develops the defensive side of his game with the same relish he attacks, the transition will be complete.