Marouane Fellaini has reportedly agreed terms on a move to Shandong Luneng of the Chinese Super League, bringing to an end his five-and-a-half-year spell with Manchester United.

The Belgian midfielder has been on the fringes at Old Trafford since Ole Gunnar Solskjær was appointed caretaker manager in late December and is set to depart the 20-time champions to sign a £18million-a-year deal in China.

Fellaini, a £27.5million signing from Everton on the final day of the 2013 summer transfer window, perhaps lasted longer at United than many would have predicted, and will depart the club having made the exact same number of appearances he did for the Toffees.

But United fans were never able to truly take Fellaini into their hearts, his skillset and style so obviously at odds with their traditional on-field values from the very beginning.

His last-minute goals to rescue results at home and in the Champions League were celebrated enthusiastically, but there was always a lingering resentment that United had to resort to seeking the powerful head of Fellaini with long, direct balls as their plan B.

The first major signing of the David Moyes era at United, it was an inauspicious beginning for the Belgian at Old Trafford. After a summer of being linked with moves for such cultured playmakers as Toni Kroos and Cesc Fàbregas, the arrival of Fellaini brought only a feeling of deflation. 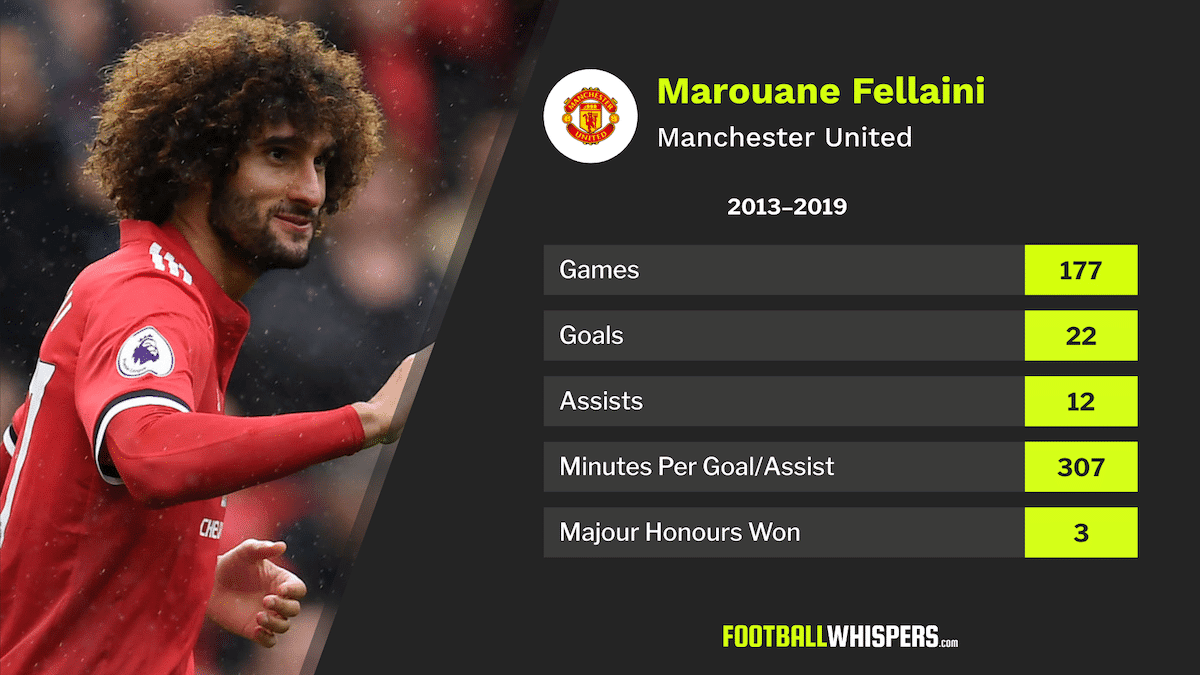 The bungling business conducted by United in their first post-Ferguson window was emphasised by how they allowed a £23million release clause in Fellaini's Everton contract to expire, forcing them to spend an extra £4.5million to land Moyes' man.

Moyes departed after just nine months in charge, but Fellaini remained, enjoying his most prolific campaign at Old Trafford under the club's next permanent managerial appointment, scoring six Premier League goals in Louis van Gaal's first season at the helm.

It is José Mourinho, the fourth of five managers the Belgian worked under in as many years, with whom Fellaini's United stay will be most synonymous, though.

Ever the pragmatist, Mourinho had no quibbles over utilising Fellaini's unique, if unaesthetic, talents.

Under the Portuguese boss, the Belgian became central to successes in the EFL Cup and the Europa League, as well as last season's second-place league finish, United's highest since Sir Alex Ferguson's retirement.

Fellaini certainly had his uses for United and his part in the three major trophies the Red Devils have accumulated in his time with the club should be recognised.

But he will forever symbolise a dark period for the club, with the gloom only now beginning to lift thanks to the guidance of Solskjær. Few inside Old Trafford will mourn Fellaini's departure.