In Manuel Pellegrini's debut season in charge, the Hammers finished a respectable tenth. Their points tally of 52 was just five shy of seventh-placed Wolves and they managed it without the fanfare afforded to other clubs who finished in the top ten.

A large part of their success was down to how quickly summer signing Felipe Anderson adapted to life in the Premier League.

Linked with big money moves to Manchester United, Chelsea and Liverpool, it was a shock to many when the Brazilian signed on the dotted line for the Hammers for a club record £36million.

It was even more of a surprise to see him swaggering around Premier League pitches from the get-go. He finished his debut season in the English top flight with nine goals and four assists.

If reports are to be believed, his form hasn't gone unnoticed. The Daily Mail claim Liverpool are interested in the 26-year-old.

Now, the Reds are in the market for a versatile forward. Anderson would arrive with Premier League experience, something Michael Edwards and the recruitment team at Anfield do seem to value, and there's potential for him to further improve.

But would he be worth the £70million fee mentioned in the reports? 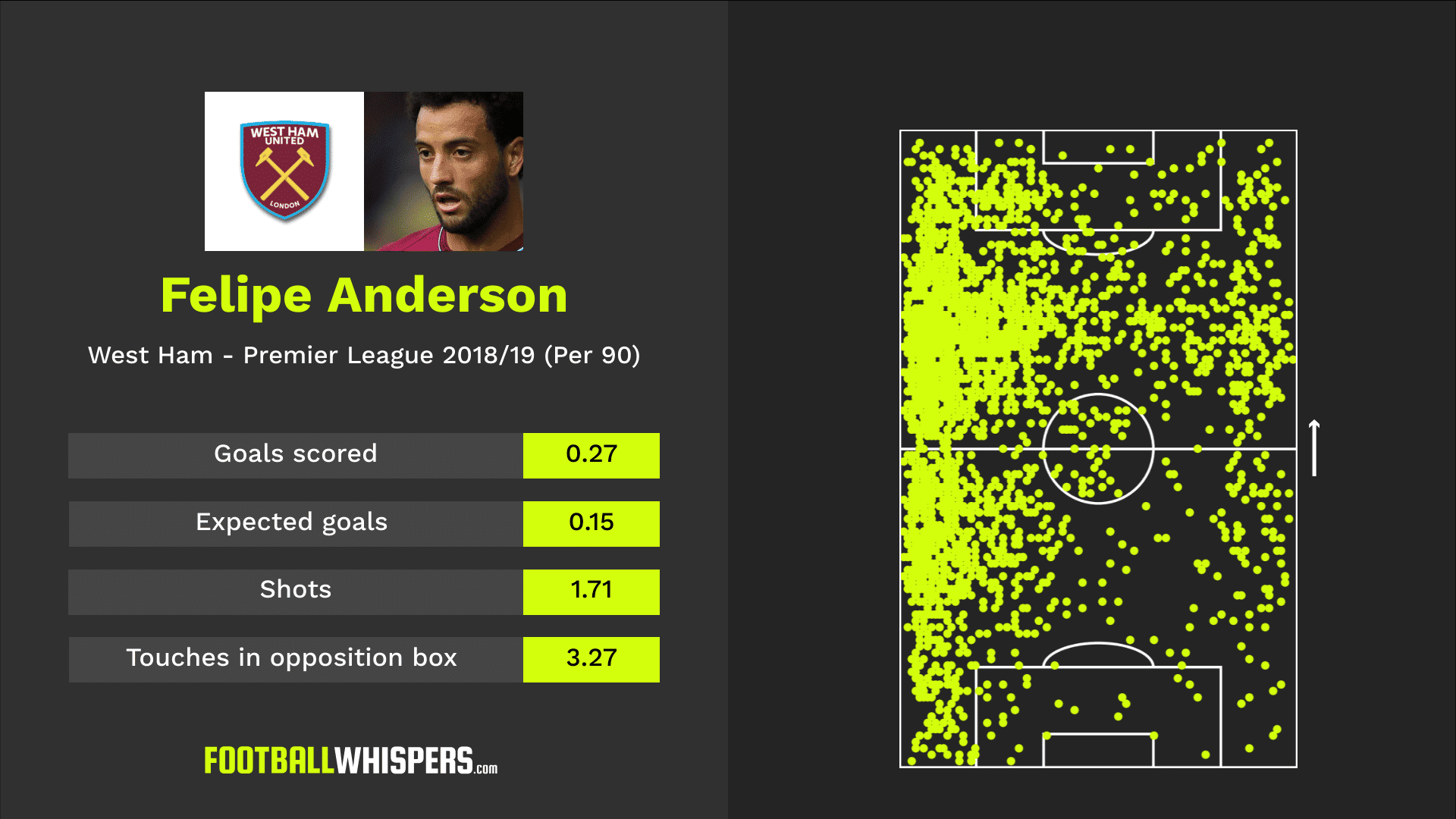 No. But isn't to say West Ham wouldn't negotiate. However, it's unlikely they'd accept anything below the £60million mark for him. Despite reports suggesting otherwise, Liverpool will have money to spend this summer.

With Danny Ings already leaving, Harry Wilson believed to be a target for a host of Premier League clubs and the likes of Ryan Kent, Simon Mignolet and Xherdan Shaqiri all available for transfer, the Reds aren't going to be short of cash. That's before contemplating the windfall received from their run to the Champions League final.

But just because they have the money doesn't mean they should spend it. Not when there are clearly better for value options out there.

Anderson's return of 0.27 goals per 90 is impressive, but he was outperforming his expected numbers by close to 50 per cent. Of course, the latter metric would rise in a more dominant side.

To succeed in Jürgen Klopp's system as a wide forward you need to be a goal threat. As things stand, Anderson wouldn't be described as that and the shots per 90 total, as well as the touches in the opposition box stat, doesn't hint at him being able to easily shift to that. 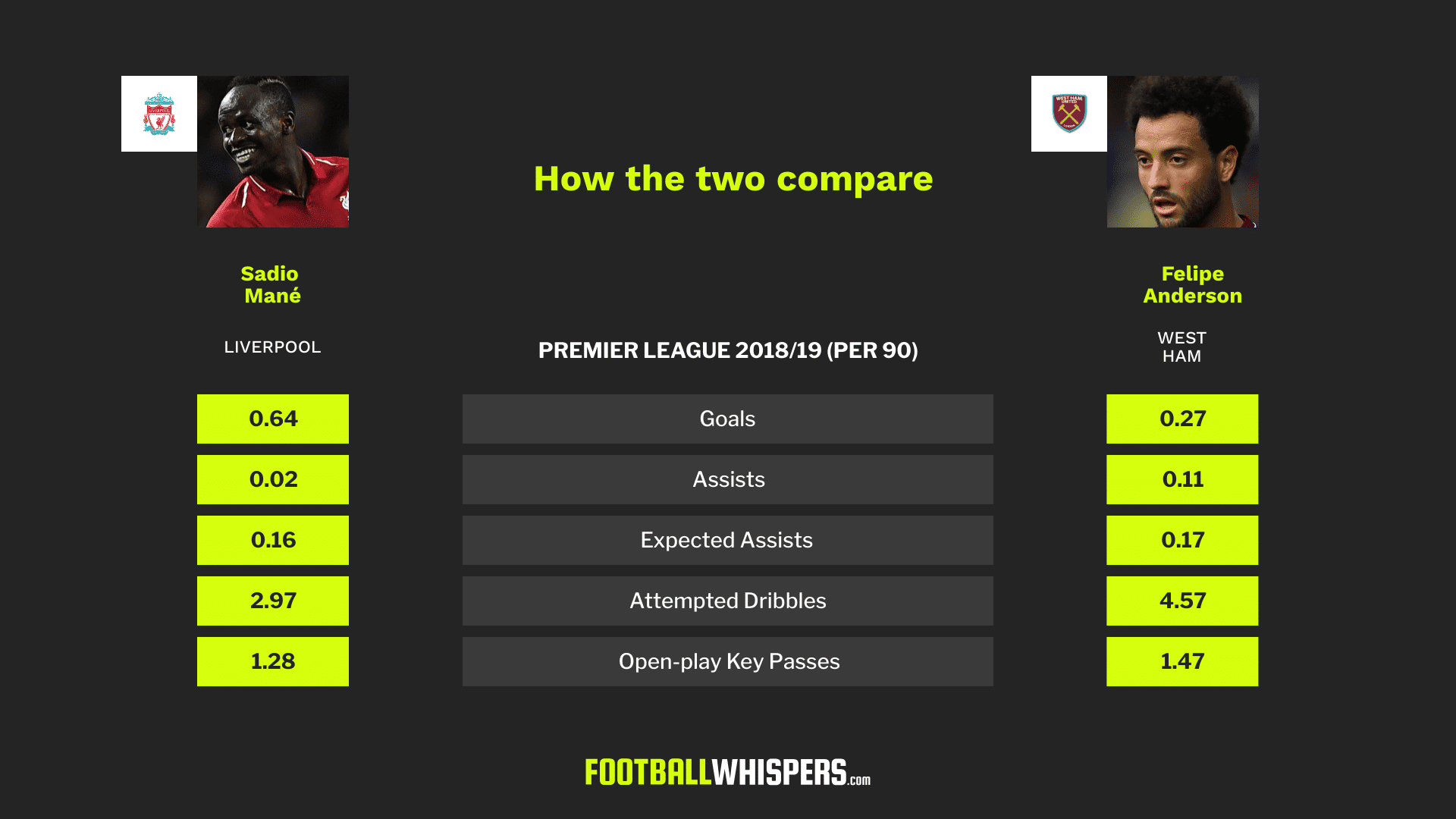 He's nothing like Mohamed Salah or Roberto Firmino so the easiest comparison to make would be to Sadio Mané with both primarily playing on the left of the attack.

Mané's goalscoring exploits in the latter half of the season saw him tie with Salah and Pierre-Emerick Aubameyang for the Golden Boot. It'd be naive to expect similar from Anderson. That just isn't him. But as a creator, he might be able to make a difference.

His expected assists per 90 is similar to Mané's average but the real difference is attempted dribbles and open-play key passes. The West Ham man comes out on top in both metrics. Adding more creativity to the forward line at Anfield is something fans have called for. In that sense, Anderson would be a welcomed addition.

But for the fees quoted you want more than just a bit of creativity. While £70million isn't once what it was, it can still get you some serious talent if you shop wisely. Liverpool would be better off spending their money elsewhere.