Chelsea have emerged as frontrunners for Nabil Fekir.

Yes, having already snapped Jorginho away from Manchester City's clutches, the Blues have set their sights on another player coveted by one of their rivals in Fekir, the slick Lyon playmaker who at one stage looked destined for Liverpool.

However, when the Frenchman's move to Anfield fell through, the Reds turned to a cut-price deal for Xherdan Shaqiri. Now, with Fekir fever on Merseyside going cold, the door has been left ajar for Maurizio Sarri to add another piece to his Stamford Bridge puzzle as the new Premier League season comes into view.

On the eve of the World Cup final, Sarri and Jorginho were announced in an exciting player-manager double-package from Napoli.

Apart from that, however, it's been a quiet summer at Chelsea. No other outfield player has been signed and despite fevered anticipation over the evolution into ‘Sarri-ball,' there are suggestions that the squad remains short.

But it's set to be a busy week for the West London club as the August 9 transfer deadline looms. Although Rob Green has arrived, Chelsea are poised to spend handsomely on a new goalkeeper if Thibaut Courtois‘ move to Real Madrid goes through.

On top of that, Sarri is keen to bolster his options higher up the pitch. Intent on sticking with his tried and tested 4-3-3 formation, the 59-year-old former banker would not have been overly encouraged by his side's attacking display in the Community Shield defeat to Manchester City on Sunday.

And while Eden Hazard is still to return to first-team action following his extended post-World Cup holiday, Chelsea are expected to chase a creative player who can emulate the role Marek Hamšík performed for Sarri in Naples.

Fekir could be that man.

Ross Barkley started the season's curtain-raiser against City and, while it was encouraging to see the 24-year-old involved following a strong pre-season showing, Chelsea need a more reliable, consistent creator behind their attacking trio if they are to improve on last season's fifth-placed finish. 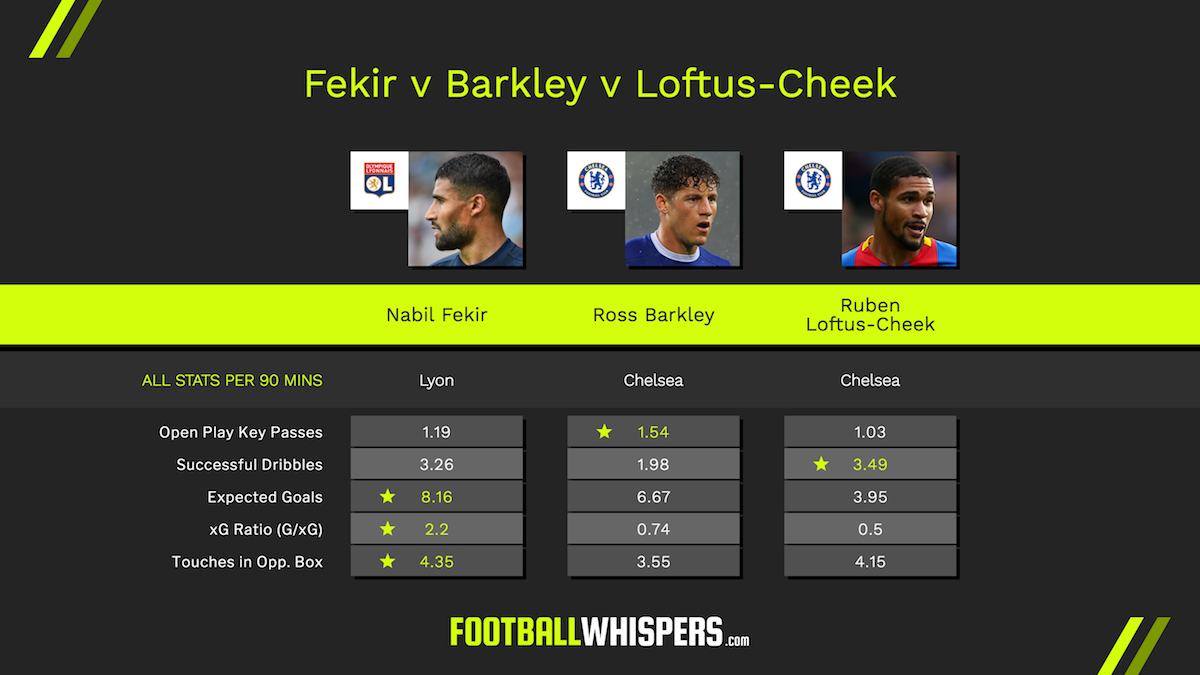 There is a feeling, too, that despite his obvious natural abilities, Ruben Loftus-Cheek is not yet the finished article. The 22-year-old is believed to be closing in on securing a second loan spell at Crystal Palace.

Fekir, however, would instantly elevate Chelsea. With Liverpool no longer in the reckoning and Fekir failing to confirm that he will still be a Lyon player come the start of the new campaign, Chelsea would be remiss not to act on their interest before the window closes.

Importantly, there is clear tactical logic to Chelsea' reported pursuit of the World Cup winner.

With Fekir's willingness to leave Lyon and a Liverpool switch seemingly dead in the water, it would be easy to view Chelsea's interest as nothing more than a superficial desire to recruit a marquee signing before the end of the window.

But no, this is more than an eleventh-hour statement of intent. Following Gonzalo Higuaín's departure from Napoli to Juventus in 2016, Sarri transformed Dries Mertens from a tricky wide player to the Partenopei's goalscorer-in-chief, often deploying the diminutive Belgian in a false nine flanked by Lorenzo Insigne and José Calléjon.

Sarri's system produced astonishing results as Napoli ran Juventus close in the Serie A title race last season, playing some of the most attractive football on the continent along the way.

It's clear that Sarri wants to replicate that blueprint as closely as possible at Stamford Bridge. Hazard can play on either wing or in the false nine role if Morata fails to cement his place under Sarri, with Fekir as the creative fulcrum ahead of Jorginho and Kanté.

Crucially, Fekir has played in a similar system to the one Sarri will implement at Chelsea. At Lyon, the France international has shone as either the most advanced midfielder in a 4-3-3 or tucked in behind the main striker in a 4-2-3-1.

He was dynamic, too, comfortable with either pushing up close to the main striker Mariano Díaz or dropping deeper into midfield to pick up the ball and launch attacks from further back, often aided by his excellent dribbling skills.

Fekir's vision, technique and passing have made him one of the hottest properties in European football. Last season, he was a key creative cog in Bruno Genesio's exciting, youthful Lyon outfit, offering strong evidence that his future lies somewhere closer to the highest level in club football.

His output was impressive, with 23 goals, nine assists and a shot placement ratio (post-shot xG/xG) of 1.39, making him one of Ligue 1's most efficient finishers.

His flair and artistry on the ball could be effectively utilised by Sarri, whose tuition helped Napoli's creative minds blossom beautifully at the Stadio San Paolo.

Securing Fekir's services would represent a significant coup for Chelsea, one that would inject a great deal of excitement just as the club embarks on this intriguing new chapter and one that could prove the difference in securing Champions League football come May.