Federico Bernardeschi has undoubtedly enjoyed the best year of his career, prompting talk of a move to the Premier League after handing in a transfer request.

Chelsea and Tottenham Hotspur have shown interest and he’s been mentioned and as a target for Manchester United and Liverpool.

A move to a Serie A giant like Juventus or Inter Milan has also been mooted as, despite spending his formative years in the Renaissance city, it seems that the Fiorentina star does not look at the world the same way as many of his fellow Tuscans.

Walking around the stunning centre of Florence is to see a constant battle for balance between modern facilities and its incredible history and tradition.

This after all, is a town that protested against a certain well-known fast food chain being allowed to open a branch in the Piazza del Duomo, one of the most visited squares in Europe and home to the city’s 800-year-old cathedral.

Fiercely protective of their home, residents were appalled at the idea of those famous golden arches being just a stone's throw from the largest brick dome ever constructed, and the authorities agreed.

The application was eventually turned down as the mayor cited regulations that aim to protect Florence’s historic centre, demanding that restaurants in the area must use “typical products” from the local area.

Mino Raiola: The Most Powerful Man in Football… by FootballWhispers

This clearly does not include cheeseburgers or chicken nuggets, meaning the beautiful piazza will retain its charm for at least a few more years. It was yet another example of what Italian’s refer to as “campanilismo,” a word which doesn’t have a specific English translation, but is derived from campanile (bell tower).

Traditionally the tallest and most prominent building in any town or village, this has become an enduring symbol of love of – and devotion to – the person’s region, city, town or village.

If the Duomo and its piazza are the Tuscan capital’s literal embodiment of this, the distinctive Viola shirts of Fiorentina are unquestionably a none-too-distant second.

Vehemently “against modern football,” fans of the club have protested against their owners – the Della Valle family – for seeing them as customers, demanding that certain long-standing values are upheld.

This is not a club whose supporters crave tangible success, rather they demand their players reflect that same passion and pride, preferring effort and entertainment to famous triumphs or trophies.

Given all of these factors, it is no surprise that Federico Bernardeschi has become so beloved, for he is one of them; a Tuscan living the dream as the club’s latest No.10.

He took that shirt – which has been previously worn by iconic skipper Giancarlo Antognoni and Italy legend Roberto Baggio – at the start of the 2015/16 campaign, doing so fully aware that holds a special place in the hearts of those on the Curva Fiesole.

“It was a bit of a special choice, but I've been Viola for many years and I wanted to try wearing that number,” Bernardeschi told La Nazione at the time.

“I want to wear it with honour and without presumption, having the number 10 on my back is a source of pride. It gives me confidence and pushes me to always give my best for this shirt, on the pitch and in training.”

As he progressed through the Fiorentina youth sector he had long-since been touted as a prospect for the future, but a fractured ankle suffered shortly after a loan spell at Crotone hindered his progress.

Fully recovered as last season began, Paulo Sousa spent the best part of the next 18 months shoehorning him into the side wherever he could, the Portuguese Coach testing Bernardeschi all over the field.

Most of his appearances came at wing-back, his natural creativity stifled in such a deep role while the defensive demands of playing in that position often proved beyond him.

However, at some point over the winter, Sousa finally appeared to agree with fans who had spent weeks pleading for Josip Iličić to be dropped, a move which finally allowed Bernardeschi to play in his natural position.

Slotting in behind Nikola Kalinić, the No.10 was finally a No.10, an opportunity he would not squander. November saw him bag five goals in six games, while a virtuoso performance in the final game of 2016 showcased his abilities in full as he helped secure a 3-3 draw with Napoli.

Twice he found an equaliser after Napoli had taken the lead, a deflected free-kick cancelling out Lorenzo Insigne’s opener before capping a skilful run with a long-range finish after Dries Mertens had scored. 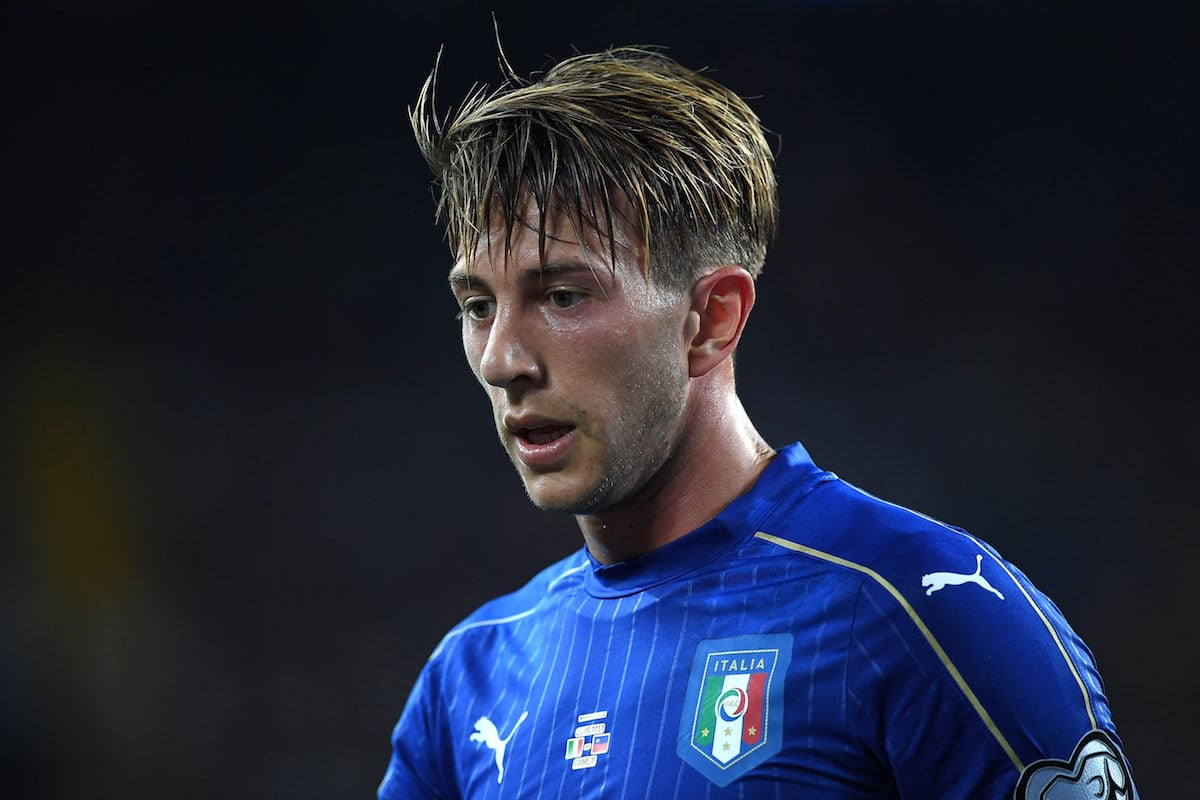 He then picked out Mauro Zarate with a wonderful pass for Fiorentina to finally go ahead thanks to the Argentinian’s incredible volley, a strike that remains a contender for goal of the season.

Previously criticised for his inconsistent contributions, he would maintain his form when action resumed in the new year, scoring against Chievo before helping earn a memorable win over bitter rivals Juventus.

Simply put, he ran the show against the Serie A champions, popping up all over the pitch to pick the Bianconeri apart. After 37 minutes – and with his side already dominating proceedings – Bernardeschi flew into a challenge with Alex Sandro, the Brazilian pulling out and allowing the Viola man to control the ball.

While the Juve defender stood complaining, he slipped the ball to Kalinić who rifled a shot beyond Gigi Buffon and into the back of the net.

It was a deserved lead, and he continued to torment Juve with a collection of tricks and flicks that confused the opposition and delighted the Stadio Artemio Franchi crowd. He created three clear scoring chances for his team-mates, connected with all but three of his pass attempts and took just one shot.

Moreover, it was his lack of selfishness that was most notable, picking the right pass at the right time, a trait Bernardeschi has previously lacked, instead often guilty of overcomplicating his play.

He also diligently stuck to the task of shadowing Claudio Marchisio whenever Fiorentina lost possession, denying the Juve midfielder time and space to dictate proceedings.

Robbed of their playmaker-in-chief, the Bianconeri were unable to find a way back into the game, much to the delight of the locals who enjoy few things more than a victory over their sworn enemies from Turin. 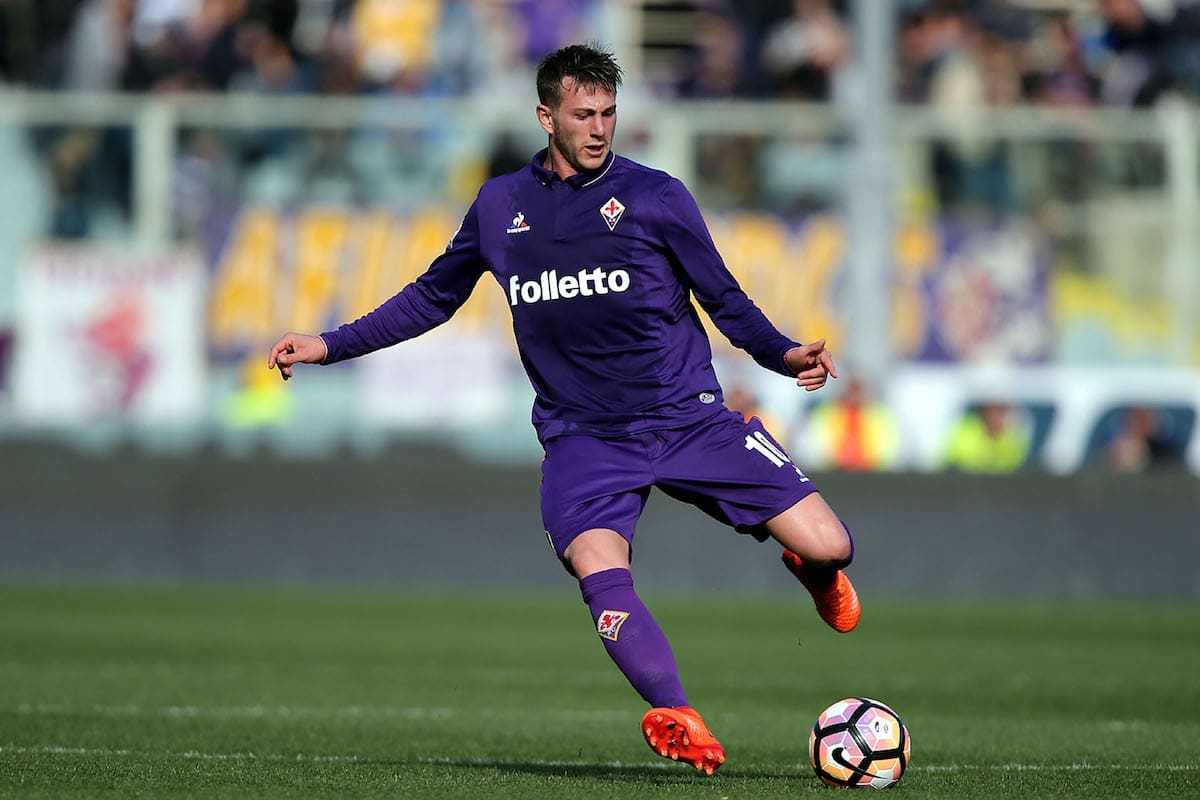 With 14 goals in all competitions, Bernardeschi was the club’s second highest scorer in 2016/17, with a free kick in a Europa League clash with Borussia Monchengladbach unquestionably the pick of the bunch.

He was also second in assists with five, a scant reward for a player who created no fewer than 57 clear scoring chances in Serie A alone over the course of the campaign.

In addition, Bernardeschi led Fiorentina in terms of take-ons (1.9 per game) and began to finally realise the potential greatness many believed he had.

His development has seen the Carrara native emerge as a potential transfer target for Chelsea, Juventus, Inter and Manchester United. And every club will believe Bernardeschi could add to their already talented squads.

Speaking last November, the man himself, suggested he might never leave the shadow of that world famous duomo. “I do have the thought in my head that I can finish my career in the Fiorentina shirt,” Bernardeschi told La Repubblica. “We’ll see how things go over the next few years.”

After his agent informed the club that the player would not be signing an extension to his current contract – a deal that expires in two years – that has now clearly changed.

Much to the dismay of the Florentines fans who loved him, it seems “campanilismo” is as foreign to the 23-year-old as it is to those tourists who arrive every day to visit the world famous artwork and landmarks around the city.

It seems Bernardeschi would rather have large fries and a diet coke after all.