One of the matches in the upcoming round of Copa del Rey is the FC Andorra vs Celta Vigo duel, so let's take a closer look at this match and what we can expect from it.

Our top betting predictions for FC Andorra vs Celta Vigo

If you are not sure what is the right bet for FC Andorra vs Celta Vigo, check our favourite betting tips for this game:

Celta Vigo to Win with Handicap (-1)

Although Andorra is in good form and they are currently fourth in their league, they are still in the third rank of Spanish football. So, it's clear that Celta is the favourite in this match and we expect them to justify this.

That being said, Celta is currently 14th in La Liga and they've only managed to get one win in the last six matches. On the other hand, they only lost once as well. So, we expect Celta to push hard for a win in this game to get some confidence back and our prediction is for Celta Vigo to win this game by two or more goals.

Celta Vigo to Win at Half Time and Full Time

Since we expect Celta Vigo to win this game by at least two goals, we also expect them to take the lead in the first half and keep it until the end of the match.

The guests are not in the best of forms and we expect them to attack from the very start since this is a perfect opportunity for them to get back into form in which they were last season.

While Celta Vigo scored five goals in the previous round of Copa del Rey, Andorra scored just one goal in their win. Still, Andorra has averaged 2.69 goals per game in Primera RFEF.

On the other hand, Celta Vigo averaged 2.24 goals per game in La Liga this season, but with them looking for a convincing win, we can see this match going over 2.5 total goals.

If you want to find the best odds for the FC Andorra vs Celta Vigo duel, check our selection of odds from various bookies:

FC Andorra vs Celta Vigo preview: Can the home team put up a fight?

After sixteen rounds in Primera RFEF Group 2, Andora is fourth in the standings and on their way to secure a spot in the playoffs for a place in La Liga 2. FC Andorra is also just four points away from the top team in the league, so there's hope that they can reach La Liga 2 directly. In Copa del Rey, FC Andorra eliminated Naxara in the previous round.

With seventeen points from seventeen games in La Liga, Celta Vigo hasn't been at their best and they are far from the form of last season since they are currently in the fourteenth spot in the standings. In the last six matches in the league, they have just one win, along with four draws and one loss. Celta Vigo eliminated Ebro with a 5-0 win to reach this stage of Copa del Rey. 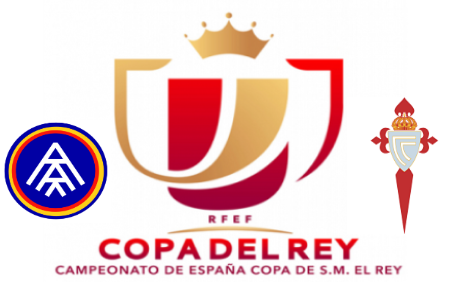