Over the past month it would have been easy for Chelsea boss Maurizio Sarri to embrace a quote attributed to the legendary American comedian Groucho Marx.

While portraying a politician on stage, it is claimed Marx quipped: “Those are my principles, and if you don't like them… well I have others.”

Sarri's football philosophy isn't so fickle though. No matter the results, no matter the performances, his belief in his system, his style, is unwavering.

Which is why in the dying seconds of Chelsea's goalless draw with Southampton on Wednesday night, instead of hoisting the ball forward from a goal kick, the Blues' central defenders peeled off to the edge of their own penalty area to collect a short pass from Kepa Arrizabalaga.

The groans around Stamford Bridge were audible. But if the players were to fail – and drawing 0-0 at home to a struggling side can't be viewed as anything else – they would fail playing Sarri's football.

There is little doubt Chelsea harmed themselves, and Sarri, in the summer. Pre-season had already started by the time Antonio Conte was relieved of his duties and the Napoli boss appointed in his place.

It gave Sarri just over three weeks to implement a radically different tactical structure, one based on high-energy, attacking football, to that of Conte.

The Italian predicted a difficult transition. And just days before the Premier League season got underway he admitted poor performances during the opening weeks of the campaign wouldn't come as a surprise.

“For sure, in this moment, we are not at the top of our potential,” he said after the Blues' final pre-season game, a 0-0 draw with Lyon.

“I hope to be at the top of the potential of the squad in one or two months, but I don't know. I hope the second part of the season will be very good with a lot of points. But I expect in the first part of the season some problems.

“What kind of problems? The results… maybe the performances in the first part of the season will not be in line with the potential of the squad.”

But Sarri was wrong. Chelsea started their season off with a 3-0 win at Huddersfield Town and then overcame Arsenal the following weekend. There were flaws, especially in defence, but the attacking freedom and adventure largely masked them.

The Blues went 18 games in all competitions without defeat. In the process, Sarri set the record for the longest Premier League unbeaten run of a new manager (12 matches).

But then came Tottenham Hotspur away.

On November 24 at Wembley, Spurs didn't only beat Chelsea 3-1, they exposed the glaring weaknesses of Sarri's side in such ruthless fashion that many have followed suit.

The defence was opened up with ease. Jorginho, the fulcrum of Chelsea's midfield, and by extension, their passing game, was pressed out of the match. As a result, the Blues struggled to get the ball into their attackers.

Sarri called the display a “disaster” but it's doubtful he'd have envisaged the ramifications being so long-lasting.

In the last nine Premier League games, including the defeat to Spurs, Chelsea's performances have dipped. But more importantly, and concerningly for the Blues boss, will be the areas in which this decline has occurred.

Dubbed ‘Sarri-ball', the Italian expects the side he coaches to play fast, attacking proactive football. This is done through incisive, one-touch passing; possession constantly moving upfield and defences being pulled apart. In turn, chances are created and goals are scored.

When it works, coupled with a high press when without the ball, the results can be breathtaking. There is a reason Sarri's Napoli team last season were renamed on social media: Stop It, Napoli.

When it doesn't work, though, as is the case for Chelsea at the moment, games become slow, attritional, attack versus defence encounters.

And the underlying numbers make for interesting reading, especially those focused on the key indicators of ‘Sarri-ball'.

As the below graphic shows, the Blues are playing fewer passes, are taking fewer shots, are creating fewer big chances and are winning possession in the attacking third far less often per match since the defeat to Spurs. 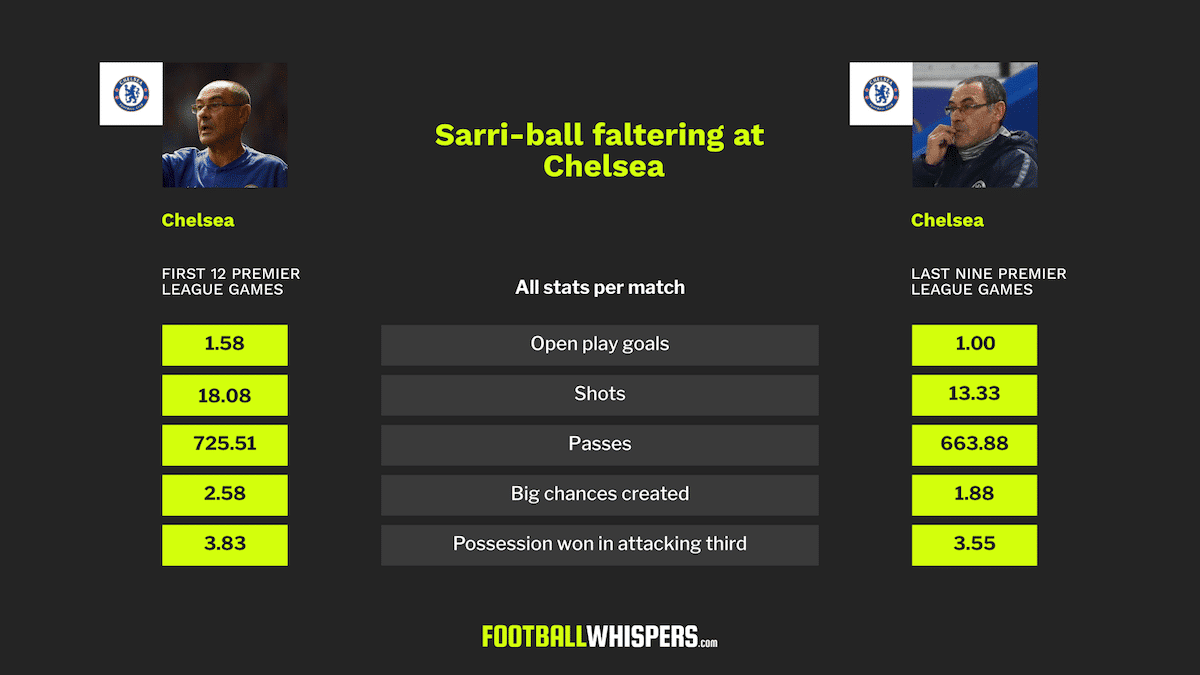 Dive a little deeper and the decline continues. The average length of Chelsea's possession has decreased, from 17.02 seconds to 14.56 seconds, their verticality in possession – how far they move the ball forward – has dropped from 41.23 metres to 39.12 and their average distance passed has gone from 97.74 metres to 87.34.

The only aspect of the Blues' possession game that has increased is the width of possession (31.24 metres to 30.98), yet that suggests Chelsea are being pushed out wide when they are unable to break down a defence. Something which passes the eye test, too.

Sarri has acknowledged his side must improve and has pinpointed the failings of the attack, which is currently injury ravaged. Yet the above would indicate the Italian has a bigger problem on his hands.

The further the season has progressed the more ‘Sarri-ball' has faltered. And be it the personnel or the system, the Chelsea boss must find a way to rectify the situation before it gets any worse.

If he fails, history suggests he won't last too long at Stamford Bridge.