Radamel Falcao has scored 16 goals in Ligue 1 this season, only two players in France have scored more while Lyon’s sensational Nabil Fekir level with the Colombian after 23 games.

Yet has been a difficult campaign for the Monaco. A host of their title-winning squad left in the summer, with Falcao, Liverpool transfer target Thomas Lemar, Fabinho and Djibril Sidibé the main attacking threats left behind.

Reinforcements were bought in the shape of Keita Balde Diao, Youri Tielemans, Adama Diakhaby while 16-year-old Pietro Pellegri was added in January for €25m – the quartet all represent the next phase in Monaco’s project.

But to fully embrace the next stage, it’s time for the Monegasque side to start a process that would see them step away from being so dependent on El Tigre.

Falcao deserves full credit for what he has achieved at the Stade Louis II. After a blistering start, his goal-scoring feats were already starting to fade before a serious knee injury in the Coupe de France saw him miss the rest of the 2013/14 campaign and ruled him out of the World Cup in Brazil.

He reached for the eject button himself in the summer of 2014, all but forcing a loan move to Manchester United. But after four goals in 26 games he trundled down to Stamford Bridge for an even unhappier spell at Chelsea the following season.

Like a wounded tiger, he limped back home to Monaco and the consensus was, that Falcao was finished.

Leonardo Jardim had other ideas. Deployed as a striker in a 4-4-2, with creativity from the wings and rampaging full-backs determined to whip the ball in at every opportunity, the Colombian hit-man found a new lease of life.

In 29 Ligue 1 league games, he scored 21 league goals, provided five assists and helped Monaco dethrone Paris Saint-Germain. He wasn’t limited to domestic success either. Five goals in eight games saw the club from the principality reach the semi-finals of the Champions League, beating Borussia Dortmund and Pep Guardiola’s Manchester City along the way.

In some sense, it was the perfect storm, although the supporting cast were stars in their own right and did more than enough to carry the team. But the style, system and game plan was all set to get the very best out of Falcao. It worked.

This season was always going to be a tough act to follow. No matter how well Monaco played, losing Bernardo Silva, Tiemoué Bakayoko, Kylian Mbappé, Valère Germain and Benjamin Mendy would have a huge impact on any team.

And all those new signings brought in to replace departing stars would take time to gel. Their styles are yet to truly mesh and after their elimination from the Champions League following a disastrous group stage, both vice president Vadim Vasilyev and Jardim admitted this was the beginning of a new cycle.

Monaco have a plan and will practice patience, not jumping the gun to pull the trigger on anyone.

Yet, come the summer, there will be a difficult choice to make. Carry on with Falcao leading the line, or make way for their new array of attacking talent.

With 16 goals in 19 games, this may come across as outlandish, but there are early signs that Falcao’s 31 years and knee injuries are catching up with him.

All his key metrics are down from last year, and as much as you can blame Monaco’s downturn in form on his lack of numbers, there are two very interesting discoveries.

He is scoring fewer goals per 90 minutes and attempting fewer shots. Even his expected goals per 90 has dropped, even if it is by the smallest margin.

However, it’s when he gets involved in the build-up play things have changed more dramatically. Both his key passes and expected goal assists (xGA) have dropped by half. 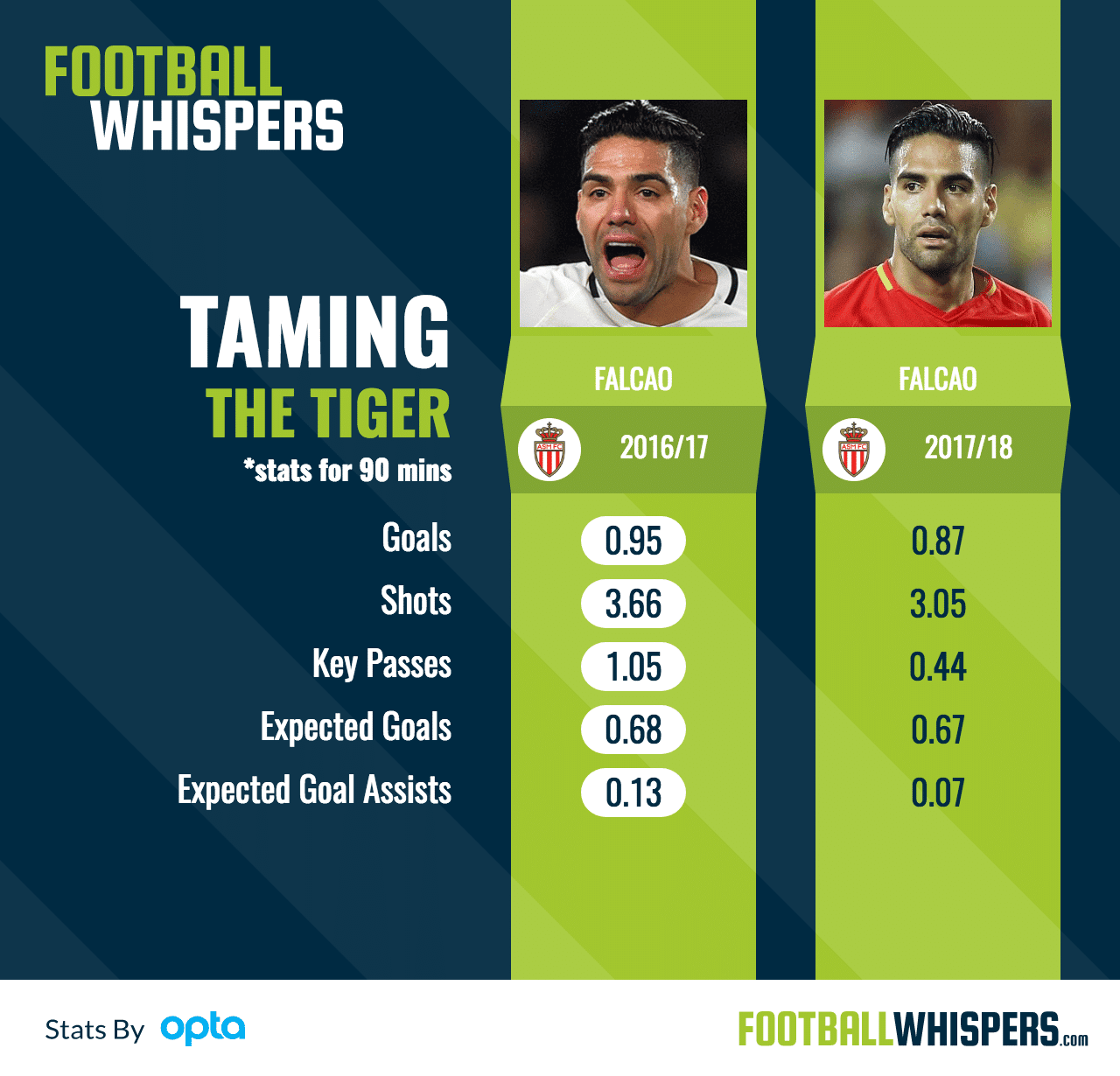 Taking last Sunday’s 2-2 draw with Marseille as an example, you can see where the cracks are beginning to show.

With Mbappé on board, Monaco were a counter-attacking machine, one which had blistering pace burning down the flanks through Mendy, Fabinho, Bernardo and Lemar.

Falcao wasn’t required in those situations. He was needed more when teams dug in, camped in their own half and invited Monaco on to them.

Which is why against OM, when Monaco attempted quick counters, their No.9 was nowhere to be seen.

Monaco weren't playing 4-4-2 anymore, it was 4-2-3-1 and if Balde, Rachid Ghezzal or even Rony Lopes when he came on weren’t able to join the attack, there was no target through the middle, no one in the right place to capitalise.

It is only further evidence that Monaco’s strength is now on the break, looking to the pace of Balde, Diakhaby and Lopes.

Due to their recent results, opposing sides aren’t sitting back as deep as they used to, especially away from home. There is space to exploit and they certainly have the personnel to make it work.

Pellegri, arriving from Genoa and standing six-foot-two inches tall, has the physical attributes to become Falcao’s long-term successor, and there is no doubt he will learn an incredible amount from training day-to-day with the Colombian striker. But even he, as you would expect, has more pace and mobility to keep up with the other young forwards.

This is not advocating Monaco just toss their top goal-scorer on the scrapheap, far from it, but Jardim should start experimenting with line-ups which don’t include the 31-year-old.

Give the young-guns more space to flourish and use their strengths, saving Falcao’s movement for the tougher, more frustrating games when teams elect to defend for 90 minutes.

When Jardim teamed Falcao with Germain in the 4-4-2, it was down to a lack of options, now, as the club reinvests its wealth on talented prospects, the Portuguese boss has more options than he could have imagined.

Falcao’s drop in numbers suggests he no longer plays as well with others, and it’s a factor as to why Monaco have struggled this season.

Jardim and Vasilyev are always trying to think long instead of short-term.

Harnessing the explosiveness of the next generation could not only be crucial in helping Monaco win the battle for the top three, but it could also prepare them for life without Falcao.