Think back to the World Cup in 2014. Can you remember who confidently struck home a late winner against Russia to secure Belgium's place in the semi-finals?

Eden Hazard, perhaps? Romelu Lukaku, maybe? Or Kevin De Bruyne? No, no, and no again. It was Divock Origi. How times have changed.

During that tournament he was hailed as a talent with world class potential, someone a better fit for the Red Devils than Lukaku, according to .

He was signed by Liverpool that summer for £10million but spent another year on loan at Lille, where he netted nine goals in 44 games. After finally arriving at Anfield he showed his promise during the 2015/16 campaign, in which he scored ten times in all competitions.

He'd net 11 times during the 2016/17 campaign and made more appearances than any other Reds player, however, the majority came from the bench as Jürgen Klopp placed his trust in the likes of Sadio Mané, Roberto Firmino and Philippe Coutinho.

So last summer, after the arrival of Mo Salah, Origi opted to leave Merseyside and join Wolfsburg, the Bundesliga club paid €6.5million to sign him on loan on deadline day with the belief they'd make the deal permanent this summer.

It was a switch that was meant to have kickstarted his career. However, German newspaper Kicker report the club have shelved their plans and Origi will now return to Anfield this summer.

So what has gone wrong at Wolfsburg for the Belgian striker? We have taken a look. 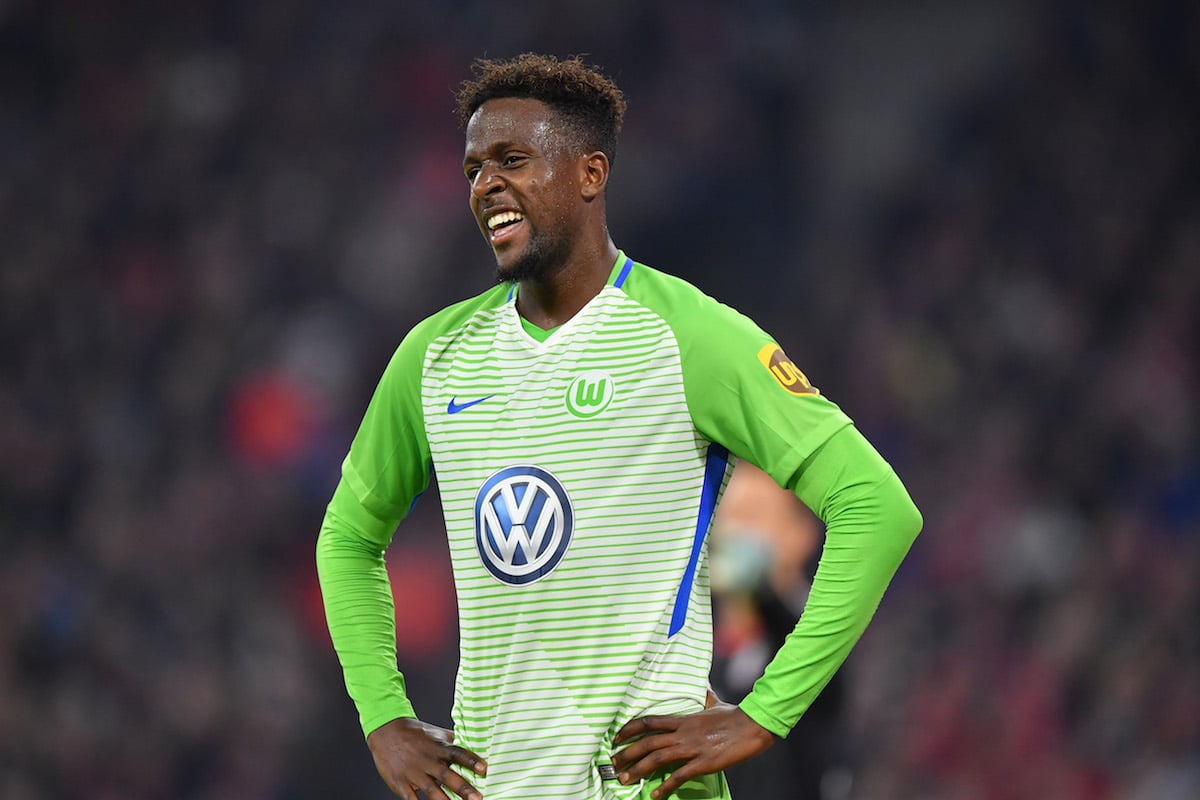 Having needed to win last season's relegation play-off to ensure their Bundesliga survival, Wolfsburg made sweeping changes in the summer. They signed ten players in an attempt to freshen up their squad led by Andries Jonker.

However, Die Wölfe began the campaign poorly and the former Arsenal academy director was sacked after just four games. Origi started that quartet of matches and completed 90 minutes twice, but he failed to find the net and his xG (expected goals) stood at just 0.63.

The arrival of Martin Schmidt brought an immediate upturn in fortunes and the 22-year-old netted his first goal for the club against Werder Bremen in September.

It started an excellent spell of form for Origi. He added another three goals to his tally by mid-November despite having an xG of 2.65.

Unfortunately his goals rarely led to wins and Wolfsburg, somewhat astonishingly, have yet to sit higher than 11th place all season.

Move to the right the wrong decision

When Mario Gomez returned from injury Schmidt opted to change system. He set his side up in a 4-2-3-1 formation with the veteran German leading the attack at Origi's expense.

The 22-year-old quickly found himself playing as a right midfielder, where his defensive weaknesses were exposed. Using a centre-forward who is adept at winning flick-ons and holding up the ball, in addition to being a threat in behind defences, as a wide player to create for others and support the backline was a bad idea.

Origi is not a creator. He struggles to release passes due to taking too long on the ball, he simply doesn't think quick enough. It's why he has averaged just 0.49 key passes per 90, a figure bettered by an incredible 94 per cent of forwards in Germany's top flight. He's created only ten chances for team-mates all season.

Schmidt’s poor decision to play him out of position and use virtually none of his strengths (combination play, mobility, finishing) while also accentuating his flaws (creating for others, multiple efforts in pressing, concentration, man-marking) shattered his confidence.

Origi didn't score during the remainder of the first half of the campaign but, after the winter break, continued in the side with Gomez sold to VfB Stuttgart.

He started the first five matches of 2018 but had a dismal xG of just 0.58 in 380 minutes. Eventually, having drawn 11 of 22 matches, Schmidt was replaced by Bruno Labbadia – Germany’s answer to Sam Allardyce.

Under Labbadia, things have gone from bad to worse for Origi, who was subbed off in the 42nd minute against Hoffenheim and has played just 24 minutes since.

As outlined above he’s had a trying season. But it’s worth noting Wolfsburg as a team have a 22.88 NPXG (non penalty expected goals) in 29 games, roughly 0.79 NPXG per game. That’s less than half Liverpool managed last season (60.54).

Of the big five European divisions, only Serie A strugglers SPAL and Crotone, and doomed Premier League side West Bromwich Albion, have such low-volume, mediocre efficiency attacks.

It’s no surprise Wolfsburg have scored more than one goal a game in just two of their last 15 Bundesliga matches. Origi is part of the problem but it’s not as if he’s surrounded by great attacking talent.

In spite of his struggles – one goal since early November in 956 minutes – Origi still leads Wolfsburg with 4.65 XG total and his five goals are only behind Daniel Didavi’s eight.

And his overall individual numbers are not much worse than his 2016/17 campaign at Liverpool, as shown in the below graphic. 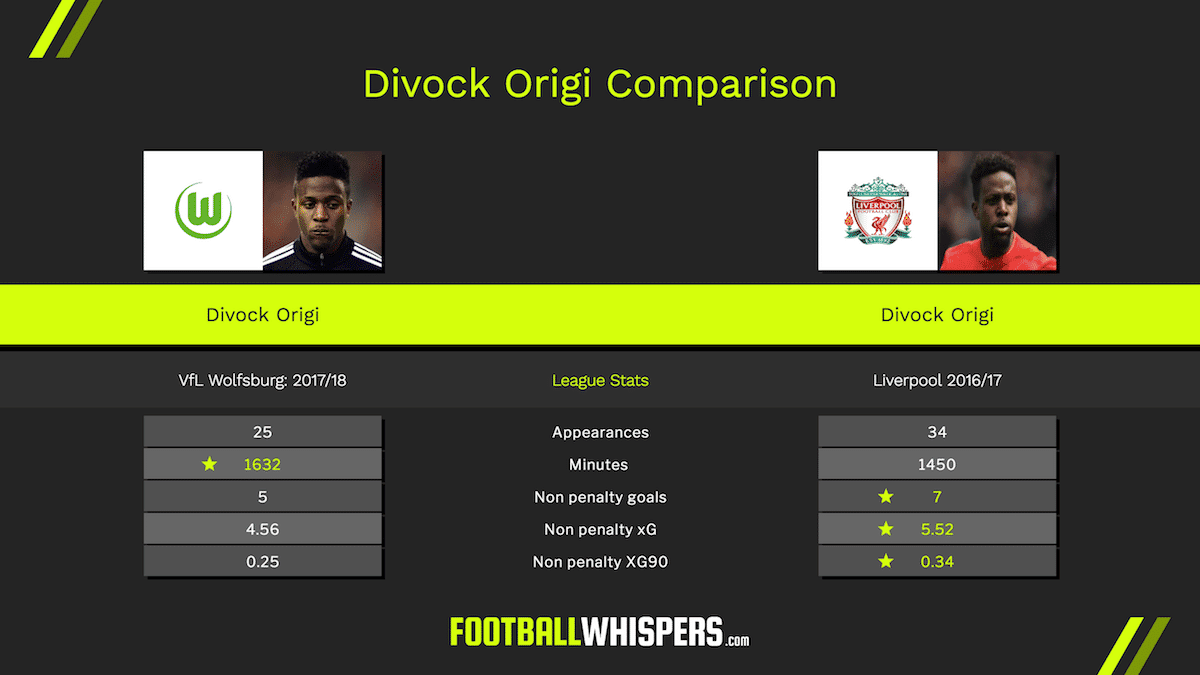 Despite the lack of service Origi is hardly exempt from criticism. He's successful in only 1.96 aerial duels per 90 – 36 Bundesliga forwards have won more – while he's also only completing 1.19 successful take-ons per 90.

The problem is that due to Wolfsburg’s abject attack and the lack of a coherent attacking structure, the Liverpool loanee is often left isolated when played up front.

He lacks the physicality of Gomez or the street-smarts of top-class forwards. Tellingly he has been caught offside 12 times this season, largely because he hasn't timed his runs correctly or interoperated the space around him.

Where next for Origi?

Although they are almost certain to avoid the embarrassment of relegation, Wolfsburg are likely to make major changes this season.

Sporting director Olaf Rebbe, who brought in Origi, could depart and the general consensus is that the forward – after being overtaken in the pecking order by Belgium Under-21 striker Landry Dimata and even 19-year-old Victor Osimhen – is as good as gone.

Yes, there was a flash of brilliance at the weekend as the Belgian set up a goal for Didavi in an important 2-0 win against Freiburg, but it was a fleeting moment of quality.

Origi's Wolfsburg experiment is likely to end in disappointment this summer and there is unlikely to be a place for him on his return to Liverpool. So he's left at a crossroads; battle on attempting to make a name for himself at Anfield or move on to a smaller club.

The latter of those two options makes the most sense. The Belgian should find a side that plays high-energy attacking football and can best utilise his skill set and rebuild his confidence.

Do that and perhaps Origi can finally live up to the expectations that were built at that World Cup in Brazil.