There is something special about Serie A, something difficult to define or pinpoint, but the world of Italian football just feels different. There is a warm sepia tinge even to calcio‘s recent past that lends itself to reverie and elevates its finest players and greatest teams.

Italy, it seems, is the land of great footballing stories. Some are tragic, like that of Il Grande Torino, the great side of the 1940s killed in the Superga plane crash. Some are scandalous, like the Calciopoli match-fixing conspiracy that saw Juventus demoted as punishment in 2006. And some are heart-warming, such as Hellas Verona's unlikely 1985 title triumph.

When Fabio Quagliarella finally decides to hang up his boots, his career story will fit into each of the above categories, owing largely to the five-year stalker ordeal he experienced, shockingly perpetrated by a Naples police officer.

Thankfully, with his personal hell now behind him, Quagliarella is writing a happy ending to his footballing tale. He has represented eight clubs, played as low as the third tier and been a Serie A regular for 13 years. He has scored spectacular goals, represented Italy 25 times and won three Scudetti.

And now, at 35 years of age and in his second spell with Sampdoria, Quagliarella is in the form of his life.

His talent has never been in question. Although not the quickest of strikers, Quagliarella has always moved intelligently, seeking space in the final third and employing the kind of technical mastery most players, even at the highest level, aren't able to attain. 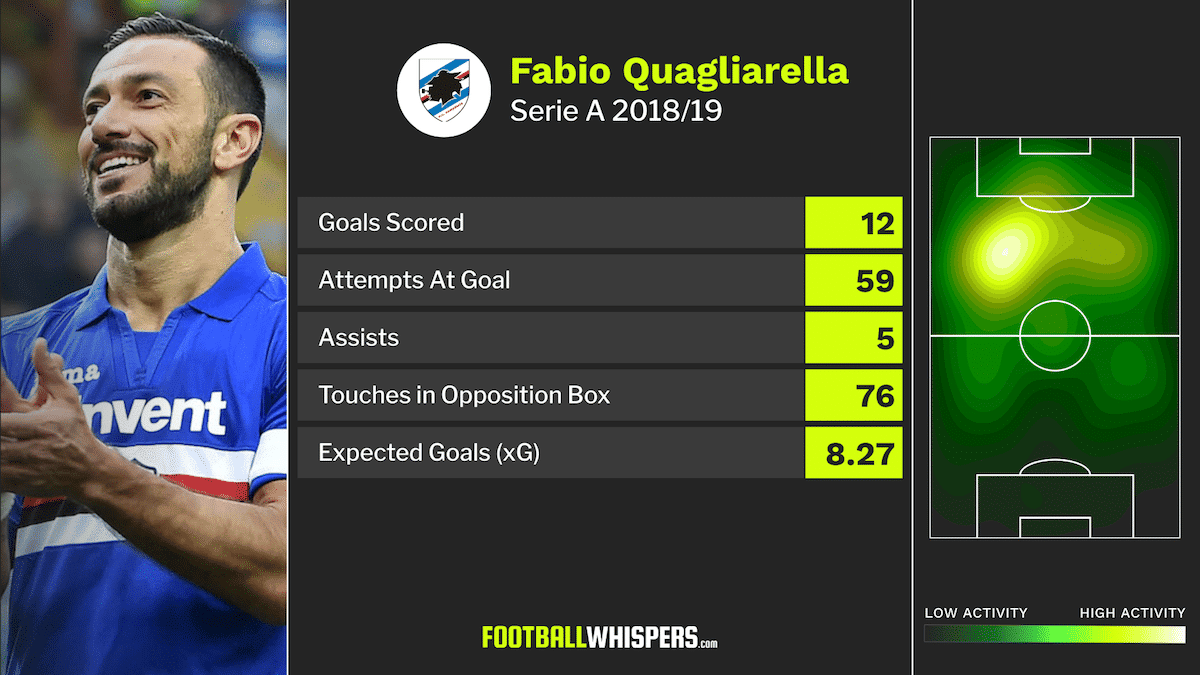 But he hasn't always been especially prolific, renowned more as a scorer of great goals than a great goal-scorer. Indeed, the veteran centre-forward's highlight reel is something to behold, mixing stunning strikes from distance with delicate lobs, inventive, back-to-goal finishes with no-frills thunderbolts.

Before last season, though, his highest goals return for a single top-flight campaign was just 13. In the ten and half seasons between his Serie A breakthrough with Ascoli in 2005/06 and his return to Sampdoria in February 2016, he only broke into double figures five times, none of which were during three seasons with Juventus.

That all began to change last season, though, when Quaglieralla posted a career-high Serie A return of 19 goals. This term has seen the 35-year-old reach yet further scoring heights, with 12 strikes from just 18 games, accounting for 37.5 per cent of seventh-placed Sampdoria's league goals for the campaign so far.

And although the goals are flowing more regularly, they are getting no less spectacular. In September, his sumptuous backheel volley was shared around the world on social media, with Quagliarella refusing to celebrate the goal as it rounded off a 3-0 drubbing of his beloved former club Napoli.

He repeated the trick in late December, backheeling into the top corner in a 2-0 win over Chievo to score for the eighth Serie A game in succession, a feat not achieved by an Italian since Christian Vieri did so for Inter Milan in 2002. And he made in nine in a row next time out, netting from spot in a 2-1 defeat to champions and runaway league leaders Juventus.

Factoring in his five assists for the campaign, too, only Juventus' five-time Ballon d'Or winner Cristiano Ronaldo has been directly involved in more goals than Sampdoria's No.27.

So impressive has Quagliarella's recent form for been that many are now calling for the former Udinese, Napoli and Torino striker to receive a first international call-up since a 1-1 friendly draw with Romania in November 2010.

Azzurri coach Roberto Mancini, tasked with rebuilding the Italian national side after missing out on qualification for the 2018 World Cup under previous manager Gian Piero Ventura, has not ruled out the possibility of selecting Quagliarella, but equally, he has not swung the doors open for the striker.

“If we get to the European Championship [in 2020, by which point Quagliarella will be 37] and Quagliarella is the top scorer in Serie A,” Mancini said in early December, “he can be useful.”

Regardless of whether Quagliarella's superlative late-career form receives international recognition, Sampdoria are delighted to have him amid their ranks.

“Quagliarella lights up Sampdoria like the lighthouse in the bay of Genoa,” Sporting director Carlo Osti told Sky Sport Italia, after tying the striker down to new terms in December as rumours of a January bid from AC Milan began to swirl.

“Aside from his technical qualities on the field, we want to underline his great qualities as a man, as he helps the team and works with the younger players to aid their development.”

Quagliarella's is becoming one of the great feel-good sporting stories, a player belatedly fulfilling his vast potential in the twilight of his career, out from under the burden of the cruellest of personal ordeals.