The best way to get over a Champions League defeat is to make a statement in the transfer market and, with the signing of Fabinho, Liverpool have done just that.

The arrival of the Brazilian shows the Reds mean business this summer. Touted as an Atlético Madrid, Paris Saint-Germain and Manchester United transfer target in the past, Liverpool's approach went under the radar and allowed them to strike an agreement with Monaco with very little fuss.

However, the most impressive part of the deal is the ruthless fashion in which it's been completed and the clear intent it shows. A £39.5million fee shows, once again, how and why Michael Edwards and the recruitment team at Anfield are one of the best in the business right now.

In the blink of an eye Liverpool's weakest area has perhaps become their strongest. A midfield three of Jordan Henderson, Gini Wijnaldum and James Milner were dominated in the Champions League final against Real Madrid. The trio did well to help the Reds reach Kyiv but there's always been a question mark surrounding their quality.

They aren't imposing enough at the best of times while their choice of passes can often be described as safe. Draws were Liverpool's undoing last season and, while it wasn't directly the sole issue, the lack of creativity in that middle third hurt Jürgen Klopp's team.

But in Fabinho and Naby Keïta, the Reds have upgraded their midfield and, after a full pre-season with the Liverpool boss, it might be as strong as their forward line. 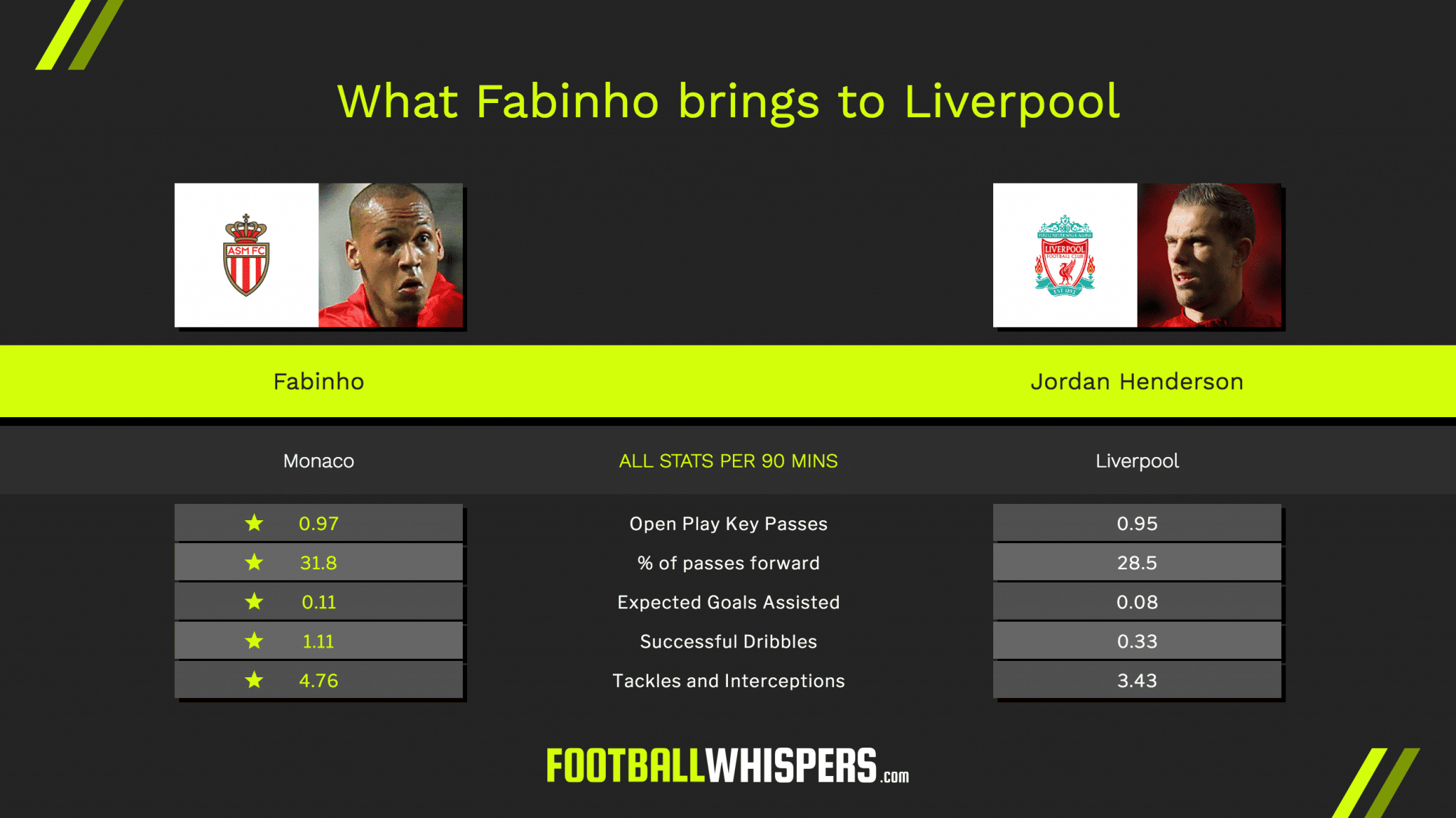 The 24-year-old former Monaco man is an upgrade on the Liverpool captain. If Paul Joyce's article is anything to go by the pair will be battling it out next season for a start next season: “Fabinho would join captain Jordan Henderson as another option for Klopp at the hub of the midfield.”

Yes, the fact they play in different leagues and teams needs to be taken into account as it has an impact on their style. Having said that, it is clear Fabinho betters Henderson in most areas, even if it's only slightly minimal.

His xA90 puts him in the top ten in France for midfielders and 2.91 aerials won is something only five Ligue 1 midfielders can better that. For context, Henderson wins 1.16 aerial duels per 90 minutes.

The Brazilian also adds incisiveness to the Liverpool midfield, something highlighted by his 1.11 successful dribbles per 90 – 300 per cent more than Henderson. Instead of just looking to play a pass he's prepared to drive forward, beat the opposition and create openings for others.

Adding flexibility to the team

Fabinho can operate in a midfield three but he's caught the eye for Monaco playing in their 4-4-2 system during the 2016/17 season.

Leonardo Jardim's men blitzed Ligue 1 and reached the semi-finals of the Champions League using a high energy style that relied heavily on fast-paced transitional football – remind you of anybody?

He spent his formative years as a right-back and this helped shape him as a midfielder. He's positionally fantastic and knows when to cover his full-backs and when to patrol the centre of the pitch. It's why, despite often being outnumbered in midfield, the double pivot he was part of would often dominate the opposition.

An interesting observation is the fact Liverpool and Monaco both win possession more times in the middle third and both teams make over 60 ball recoveries on a per 90 minute basis. Despite the Reds having more men in that area, the Monaco midfield makes up for it with stamina and athleticism.

The Ligue 1 side would concede goals but it was always going to happen given just how frenetic their style was. Liverpool have refined their approach so it's much more organised chaos now. 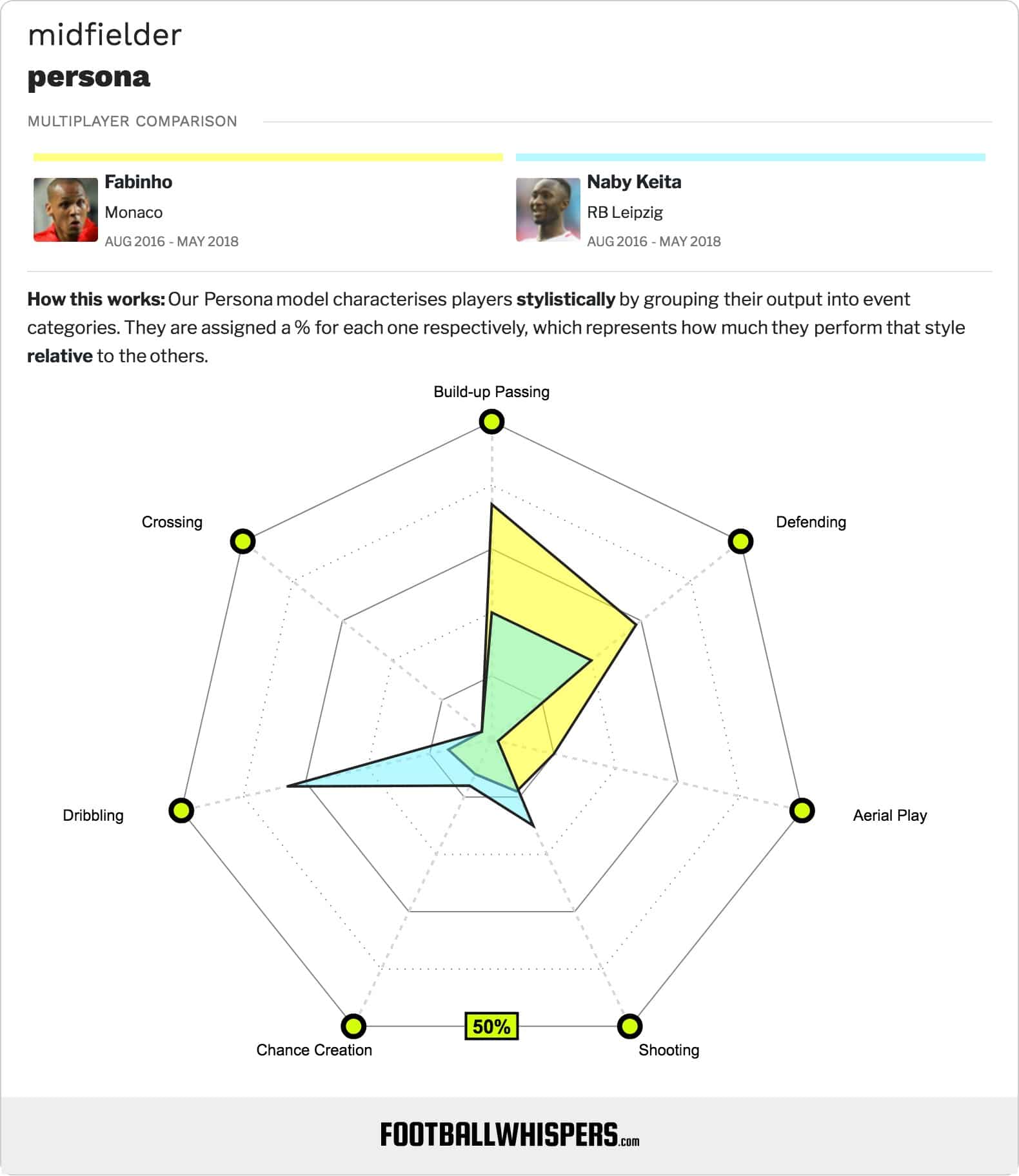 The Player Persona radar above, exclusive to Football Whispers, compares Liverpool's two new midfielders over the past couple of seasons and it paints a good picture of two players who could work in tandem.

As expected, Keïta is the more aggressive of the pair. The 23-year-old dynamo is a dribbler, a chance creator and a player who looks to test the opposition's goalkeeper, whereas Fabinho is characterised more so by his build-up passing and his defensive work.

Many have been wondering how Klopp would unleash the whirlwind that is Keïta onto the Premier League without it having an impact on the team as a defensive unit.

A number of defensive midfielders have been linked but all had limitations on the ball while the deep-lying playmakers weren't as energetic enough to cover the ground necessary. In Fabinho, though, the Reds have found the perfect counterweight to Keïta.

Liverpool have seemingly done it again. They've found players who complement one another. They did it with Mohamed Salah, Sadio Mané and Roberto Firmino, and it will only improve them as a team. Fabinho could be the bargain of the summer.