The dust had barely settled on the 2016/17 season when Benfica goalkeeper Ederson. An outlay of nearly £80million spent before the transfer window had even officially opened.

Manchester United, Arsenal, Spurs and the others are already on the back foot. Jose Mourinho was thought to be a big fan of Silva, but their interest cooled, now, it’s one of his team-mates who is reportedly close to arriving at Old Trafford.

Playing just inside of the Portuguese attacker, Brazilian Fabinho has emerged as one of the best midfielders in Europe, a long way since he was a member of Real Madrid’s B team, given one appearance at the Santiago Bernabéu by the now Manchester United boss.

That was in 2013, the 19-year-old came off the bench for Fabio Coentrão with 14 minutes to go and provided a late assist in the 6-2 win over Málaga. Then, he was just an unknown full-back, now, he’s the midfielder that could complete United’s defence and help them fight for a place in the top four.

Why do Man United want Fabinho?

When Monaco took on Arsenal in the UEFA Champions League in 2015, the Ligue 1 side were suffering a few injuries in midfield. After impressing at right-back, Fabinho played in the holding role and it worked perfectly.

Leonardo Jardim’s side looked to play on the break, and Fabinho was the catalyst. He’d already been used in that role a couple of times, but no one quite realised this is where his future lay.

As the Portuguese coach tried to find his best formation, the Brazilian would play a mixture of the two roles and it wasn’t until this season that the centre of Monaco’s midfield became his home.

It was a masterstroke from Jardim. Signing Djibril Sidibé from Lille gave him another full-back and Fabinho’s superb athleticism, ability to read the game, intercept trouble and neat passing, transitioned beautifully to the four-man midfield.

Against Lille, he uses his great upper-body strength to win the ball from Nicolas De Preville.

The midfielder holds off the attacker and although he is forced back all the way to his own by-line, he doesn’t panic, he doesn’t take the easy way out. 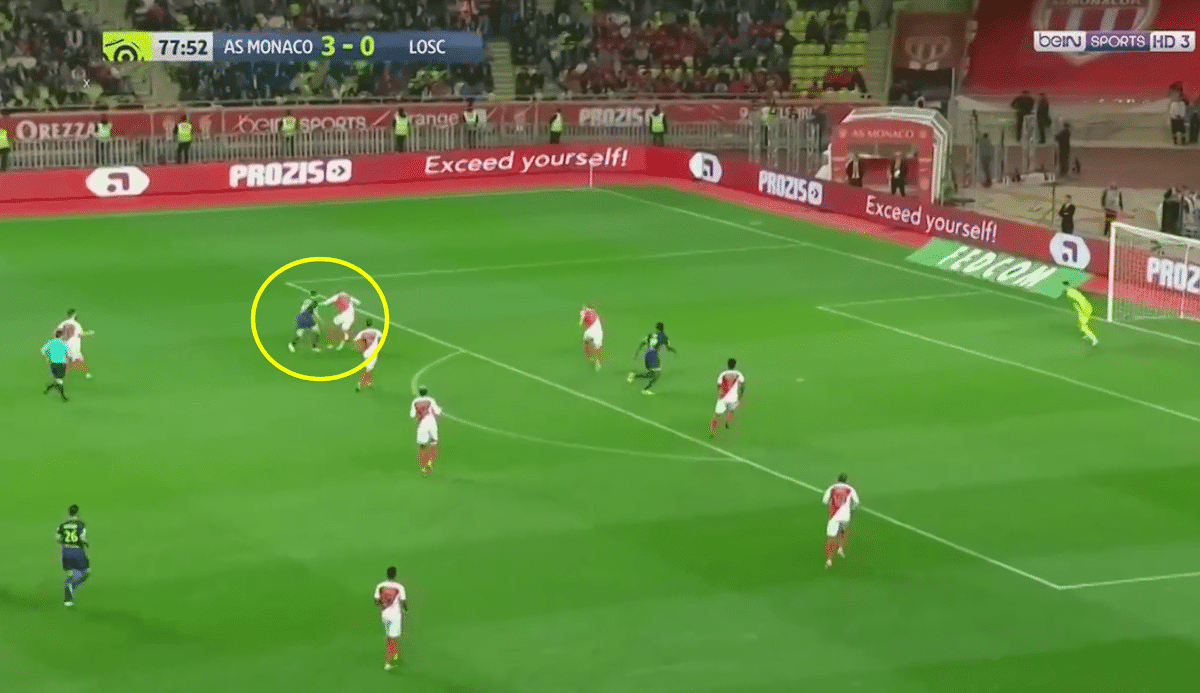 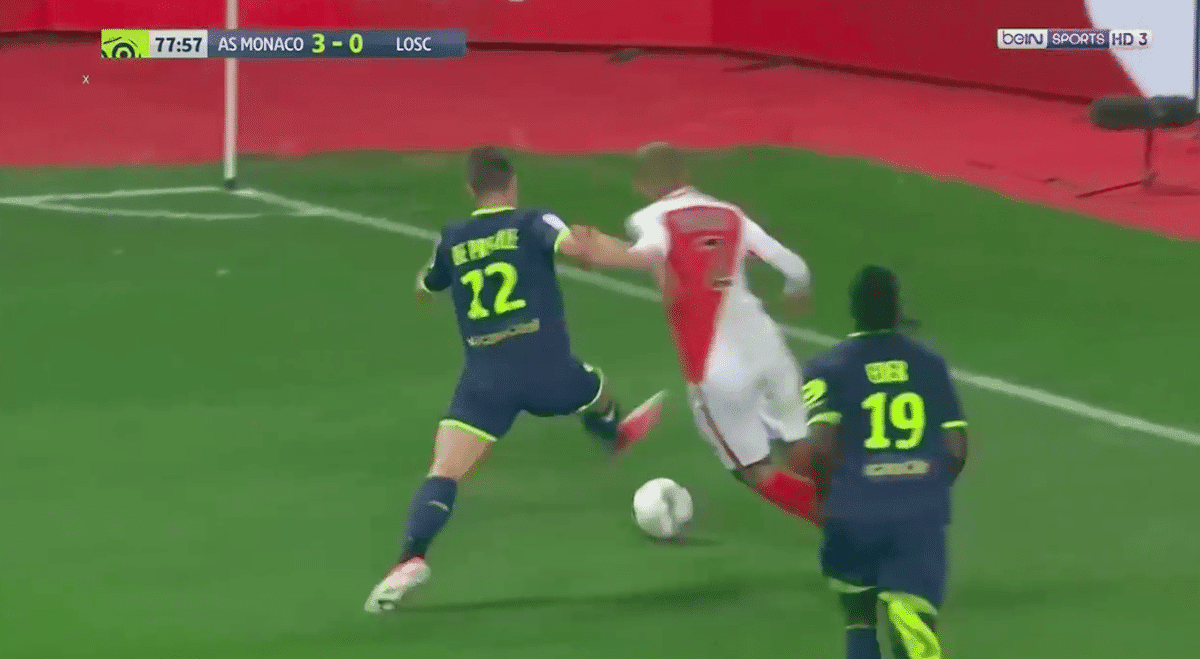 Fabinho is confident in his own ability, finds a half yard, uses his pace to beat two Lille players and his impressive running strength on the ball only needs four touches before he’s own the way to half-way line. 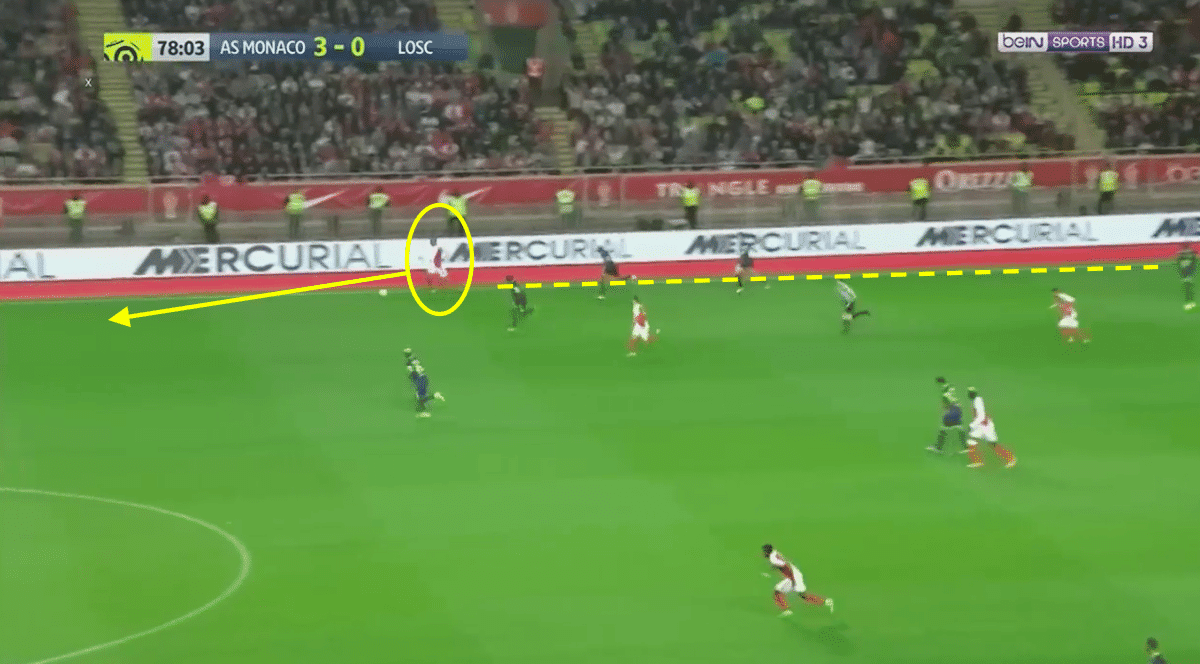 That example exemplifies exactly what Fabinho can do. He has the defensive ability to read, react and break up any attacking threat, but from his history as a full-back, he’s great on the ball, able to push into the attack and drive forward.

Where would he play in the United midfield?

Compared to what Manchester United already have, Fabinho is a great blend of everything. He could play as the deepest midfielder, giving Mourinho the defensive midfielder he usually craves.

He’s not a Michael Carrick replacement, he’s not a big long-ball component, but he’s athletic in the mould of Claude Makélélé, Costinha or Lassana Diarra, if not more technical than those mentioned.

Playing in a side that doesn’t prioritise possession in the same way that United do, Fabinho still averaged 58.4 passes per 90 minutes, less than the current midfielders at Old Trafford, but his completion percentage is close.

He has a higher rate of short passes completed, showing he likes to keep the game simple, he’ll leave the long balls to Paul Pogba and Ander Herrera. 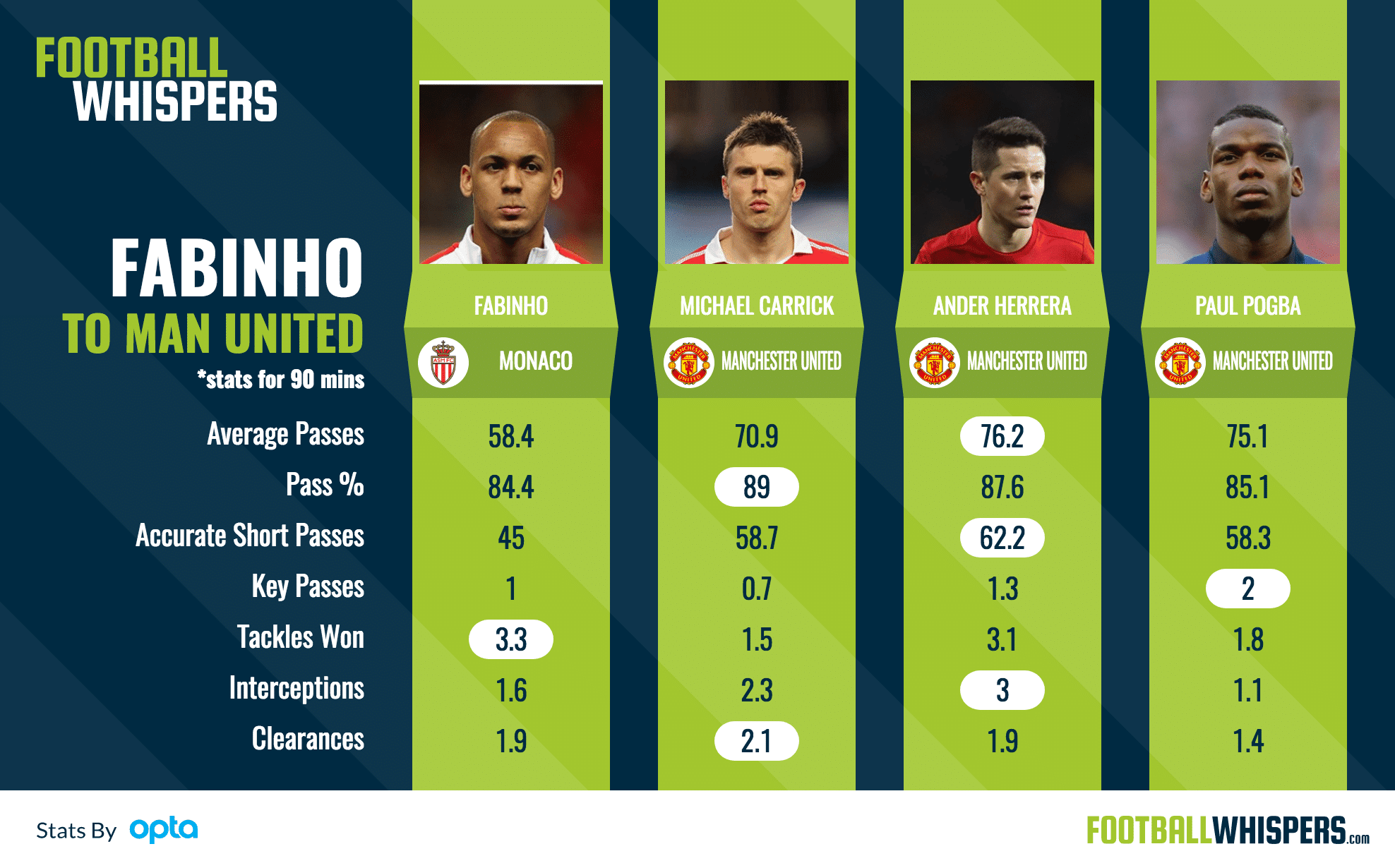 The Brazilian wins more tackles per 90 than the Frenchman and Carrick, his clearances match Herrera and Pogba, and just fall short of the veteran Englishman.

Fabinho wouldn’t be a replacement for the former Spurs midfielder, but he’s something in the middle and the type of player Mourinho usually craves, but with that little spark of difference.

United’s three-man midfield would be flexible, Fabinho as the deepest and Herrera allowed to play to the right, but they could swap around during games depending on what is needed.

There has been talk of Fabinho's exit for months now, but the 23-year-old hasn't let it phase him.

“I also saw a lot going on in the press. I’m happy to be linked with big clubs but if nothing real and clear happens, it doesn’t mean a thing, does it? He told FourFourTwo. “That’s why I keep on working.”

Happy to let his agent, Jorge Mendes do what he is paid for. After helping extend his deal at Monaco until 2021, his next task will be to negotiate a move to where the Brazilian ultimately wants to be.

“My objective is to get to a club with the dimension of Manchester United – I have no clue if one day I’ll be a United player, but I’ll keep on working so it stops being a rumour and becomes reality,” he continued.

“I’ve spoken to David Luiz and Filipe Luis about their experience in the Premier League. Filipe told me that it’s a high intensity league, in every match. Maybe in other leagues you can rest in some weeks, but not in England. That’s a league where I want to play. Every match is sold out. Football in England is physical, but here in France it’s the same so I wouldn’t have problems adapting.”

Once he settles, Premier League fans would be able to enjoy the player he has grown to be in France.

There could be an issue in the United midfield that none of these player are a box-to-box style option, able to break the lines in the final third, but that’s where Pogba’s development is key, he has the x factor, that little spark that can make special moments appear from nowhere.

That’s where Fabinho comes in, his athleticism and ability to cover ground quickly, protects the defence and lets the attacking players, and Pogba, do what they do best.

That’s where the Brazilian is priceless and worth whatever Manchester United are willing to pay.