West Ham United are hoping to become a force under new manager Manuel Pellegrini next season and have already been linked with a number of players this summer.

One area which seems bound for improvement is in goal, following last season's chopping and changing between . The haphazard duo shared Premier League duties last season with 19 appearances each.

That's highly unlikely to happen under Pellegrini, who will want a regular and reliable stopper for the new campaign – and lately the Hammers have been linked with bringing a certain custodian back to London.

So is the Polish stopper the man to finally solve the Hammers' goalkeeping woes? We take a look at why the East Londoners are keen on Swansea's No.1

Fabianski was never first choice at Arsenal, instead serving as an understudy to Manuel Almunia, among others. But when his contract expired in 2014 he decided to spread his wings and move to south Wales where was guaranteed first-team football.

Last season he played in every Premier League match and was kept a busy man as the Swans battled at the bottom of the table. But, when comparing to Hart and Adrían, you can see why he'd be a shrewd acquisition at the London Stadium.

Fabianski's statistics and ranking up against other goalkeepers is impressive. Let's take a look. 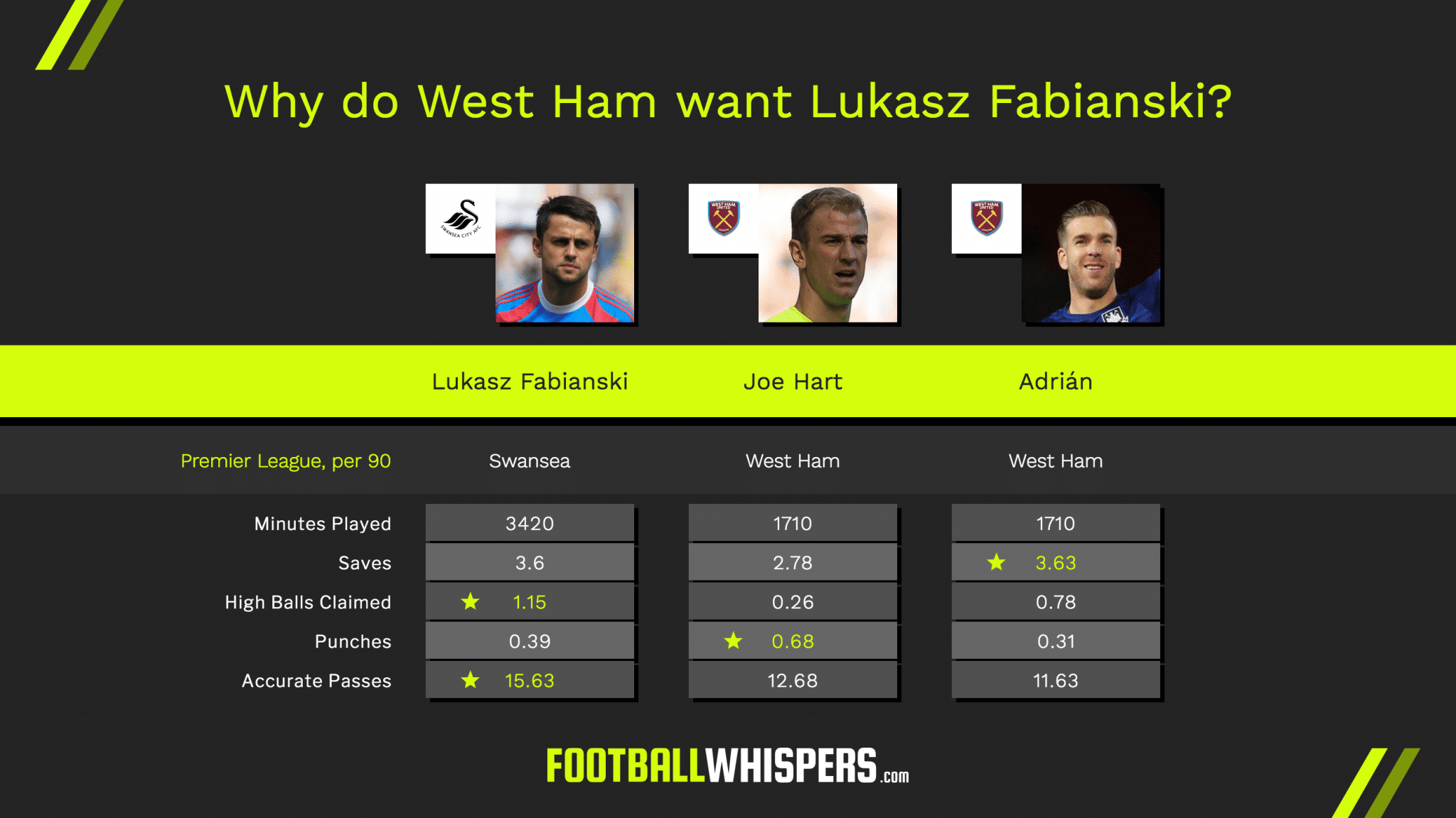 For a start, he's ranked second for the number of saves he had to make last season. He made 3.6 saves per 90 minutes in the Premier League although that is largely thanks to the leaky defence in front of him. For context, Hart made 2.78 saves per 90 while Adrían managed 3.63.

And when it came to penalties, Fabianski excelled, saving three of the six he faced last term. Hart faced five and stopped one, while Adrían faced just one.

Fabianski is impressive in the air too. He commands his area well and last season averaged 1.15 high balls claimed per 90 which put him third among top-flight goalkeepers.

Fabianski is also better than both with the ball at his feet. He managed 15.63 accurate passes per 90 minutes last season, the ninth-most in the Premier League, with Hart (12.68) and Adrían (11.63) behind him.

Those statistics shows that although he was unable to prevent the Swans being relegated from the Premier League he was by no means complicit in their slump into the Championship and he was always likely to clinch a swift return to the top table of English football.

Fabianski would be a good fit in East London and a fillip for the Hammers who, in recent times, have made a habit of signing ageing stars on expensive, long-term deals. Last summer, for example, they signed Javier Hernández (29), Marco Arnautović (28) and Pablo Zabaleta (32) for a combined £36million. They will not see even a fraction of that outlay back when the trio depart.

At 33 Fabianski is still very much in his prime as a goalkeeper and, on a free transfer, would have been a clever signing for any club looking for a keeper with Premier League experience.

With Hart enduring another poor season before heading back to parent club Manchester City, the Hammers need another goalkeeper and Adrían, who has had several stints as No.1 without convincing, is not the answer long term.

Fabianski's statistics from last season are comfortably better than the Spaniard's and it is clear he will be an upgrade on the former Real Betis stopper. It might not be a statement signing to kick off the Pellegrini era but it is the addition the Hammers need.