Compared to Sergej Milinković-Savić and said to be a Newcastle United, West Ham United, Stoke City, Everton, Chelsea, Arsenal and Barcelona transfer target, it's safe to say Fabián Ruiz is having his breakout season.

The 21-year-old Real Betis man has caught the eye in La Liga this term, putting in a number of impressive performances in the middle third. So much so, reports in January suggested Barca had identified him as the man to save their B team's season.

The plan was to have him play for the B side for the remainder of the campaign before joining the likes of Lionel Messi, Luis Suárez and Andrés Iniesta at the Nou Camp for the 2018/19 campaign.

However, both Betis and Ruiz weren't interested in the deal and Barcelona had to switch targets. They have now, according to reports, agreed a deal with Grêmio for Arthur.

Amid interesting, the Andalusian-based club acted quickly to tie Ruiz down to a longer contract. His previous deal expired in 2020 and had a €15million release clause, something Betis, understandably, wanted to increase.

Álvaro Torres, Ruiz's agent, proved to be an obstacle as he didn't want his client priced out of a move this summer. Eventually the midfielder put pen to paper on a new contract in February, committing himself until 2023 and agreeing to a €30million release clause. It's a fee most Premier League clubs, and a host of teams from across Europe, can afford.

Ruiz has most recently been linked with a move to the Stadio Olympico, with Lazio drawing up a list of possible replacements for Milinković-Savić, who looks set to move on to bigger and better things this summer.

Stoke and Everton are too keen on the Spanish maestro as they look to bolster their midfield options, while the top six in the Premier League will be keeping a close eye on his situation as they finalise their summer plans.

The midfielder joined the Betis youth system in 2004 and progressed through the ranks. He made his debut for the B team as an 18-year-old in 2014.

Ruiz's form resulted in him making his first-team debut in the Segunda Division. The team won promotion to La Liga and Ruiz was able to make his first appearance in the Spanish top flight during the 2015/16 season.

Due to limited opportunities, Ruiz, who can also play out wide, was loaned to Elche for the 2016/17 season. It's this move which helped him mature into the player who has taken La Liga by storm.

He's been capped by the Spanish Under-21 side and is even an outside bet to make Julen Lopetegui's World Cup squad.

Like most Spanish midfielders, Ruiz is confident and comfortable on the ball. He's got great vision, fantastic feet and has the ability to execute the passes he spots.

However, what makes him different is he doesn't have the swagger the likes of Sergio Busquets, Xavi, Cesc Fabregas and David Silva all possess, instead he's a bit more of a busy body.

He doesn't glide across the pitch, he scrambles. It's why he's ideally suited to a box-to-box midfield role and perhaps why so many Premier League clubs are following him.

What are Ruiz's strengths?

Ruiz is an all-rounder. You just have to look at his stats to see that. He's winning 2.66 tackles and making 1.44 interceptions per 90 minutes, while averaging 0.27 assists and playing one open play key pass. To go along with that he's completing 2.33 successful dribbles.

He's having an impact at both ends of the pitch, and this while playing for a mid-table team in La Liga. In a better side, surrounded by more gifted players, he could well flourish into one of the best in Europe.

Looking at the stats you can see he's switched on. To be making, on average, four tackles and interceptions per 90 minutes shows he's covering a lot of ground and is aware to the danger. This is one of his biggest strengths. He has the ability to turn a defensive situation into a counter attacking one. 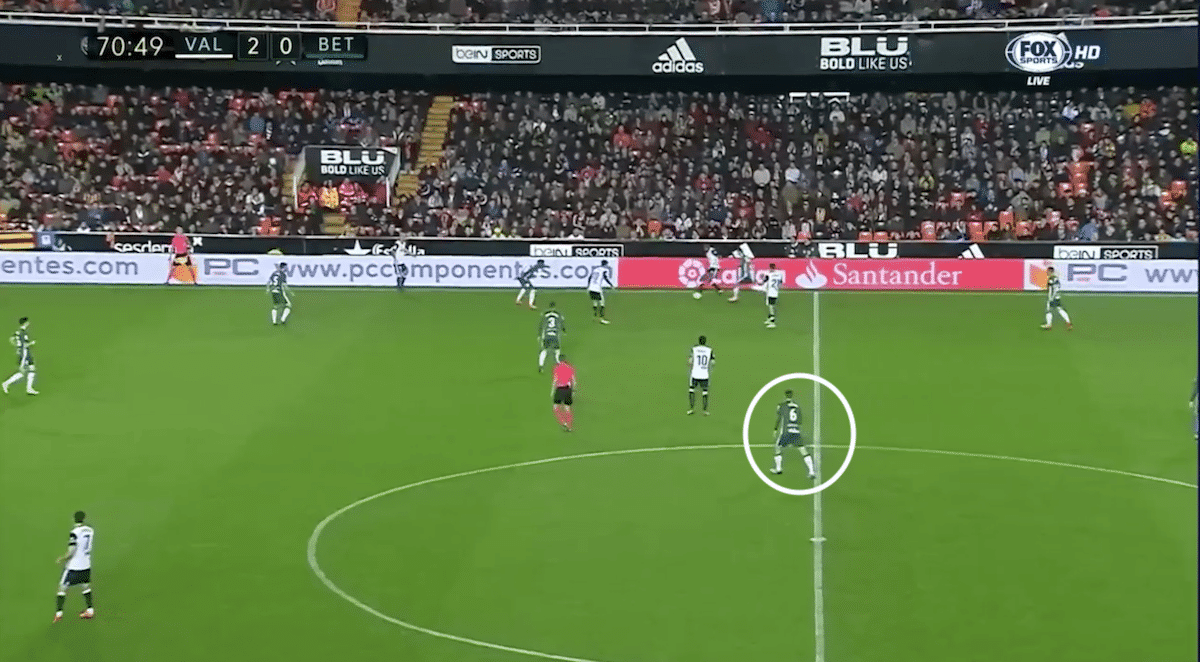 Here, against Valencia, you can see Ruiz circled in the centre of the pitch.

Play is progressing down the Betis left but he's not pushed over to get closer to Daniel Parejo, the No.10, incase the ball is switched to the Betis right and he has to get across to cover. 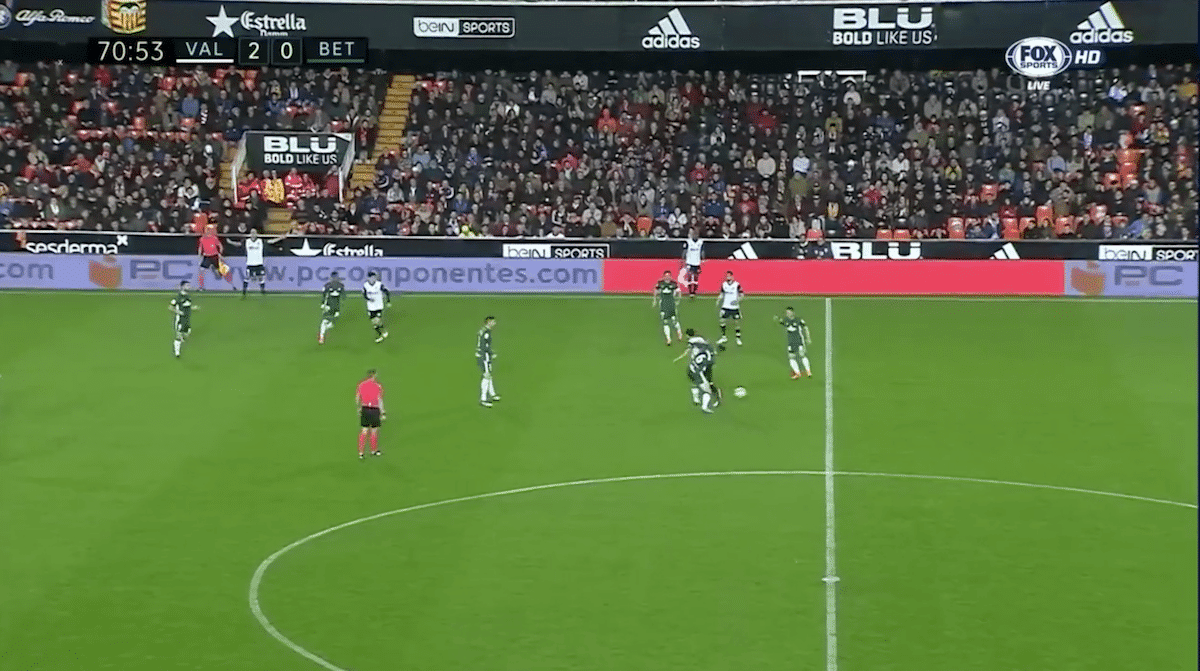 But when the ball finds it's way to Parejo, before he's even had the opportunity to get it out from under his feet and decide which pass to play, Ruiz has closed him down, held him up and then managed to poke the ball away from the playmaker to a team-mate. 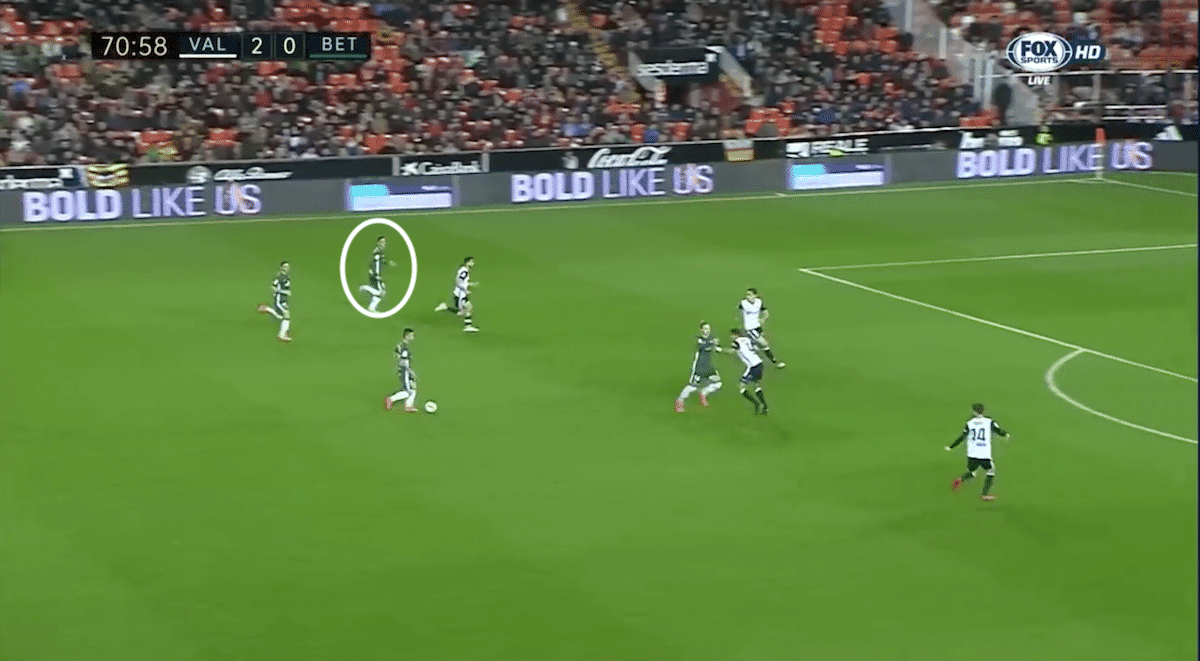 Betis then look to counter side and Ruiz, circled in white, joins the attack in an attempt to overload the left hand side.

In this one phase of play you see the midfielder not shirk his defensive responsibilities before showing the desire to get forward as his team search for a way back into the game.

A lot of sides in the Premier League need to make the most of counter attacking opportunities, with so many teams looking to sit deep and frustrate. Having a player like Ruiz, who can counter press intelligently, will help create chances on a regular basis.

He's also pretty handy at breaking the lines, as you can see below. 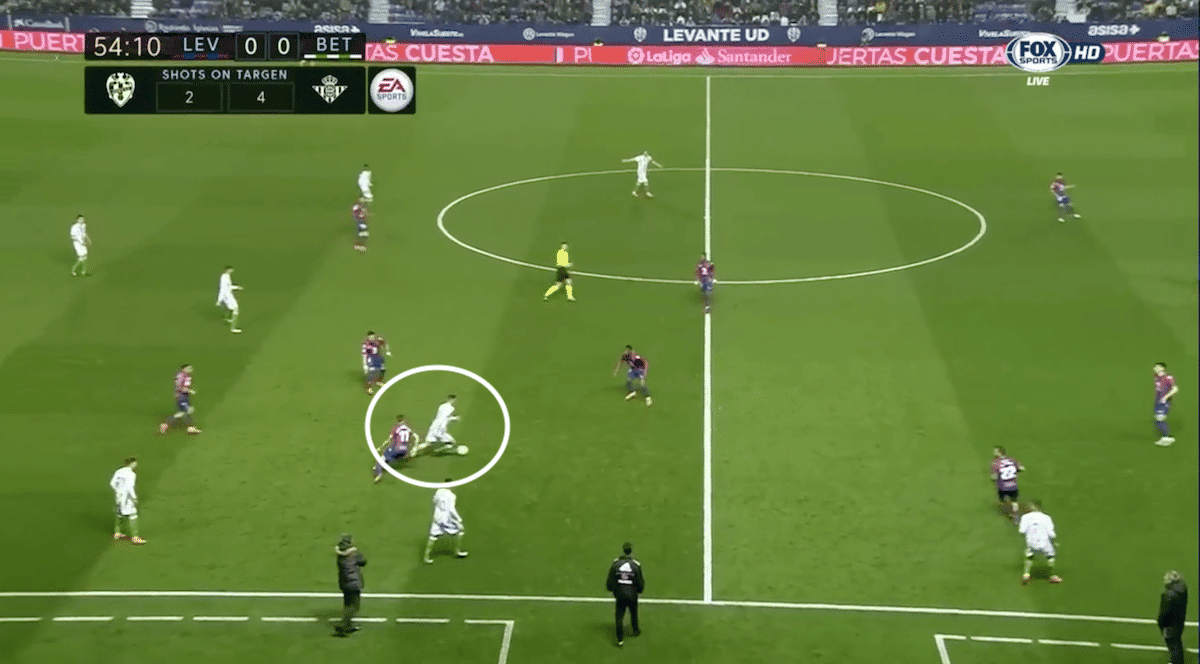 He picks up the ball against Levante and is immediately put under pressure.

There's not much space to play in and if he loses possession the home side are well positioned to build an attack. But he feints his way past the closest player to him and the pitch opens up. 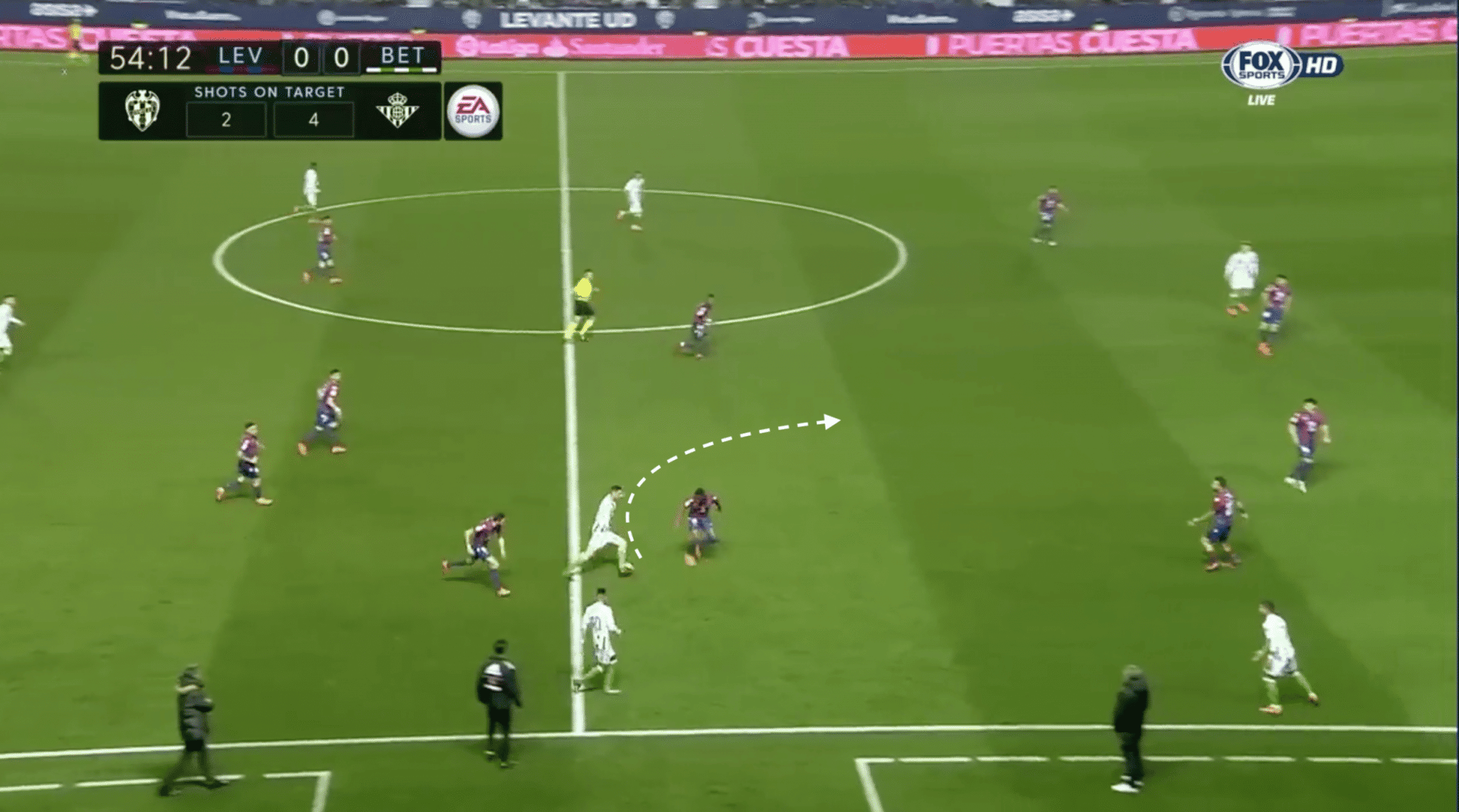 With a twist of the hips he's past another player and this time he is able to break into the acres of space ahead of the Levante defence.

In two seconds he's gone from having four men around him to being fairly free and driving into the opposition's half. 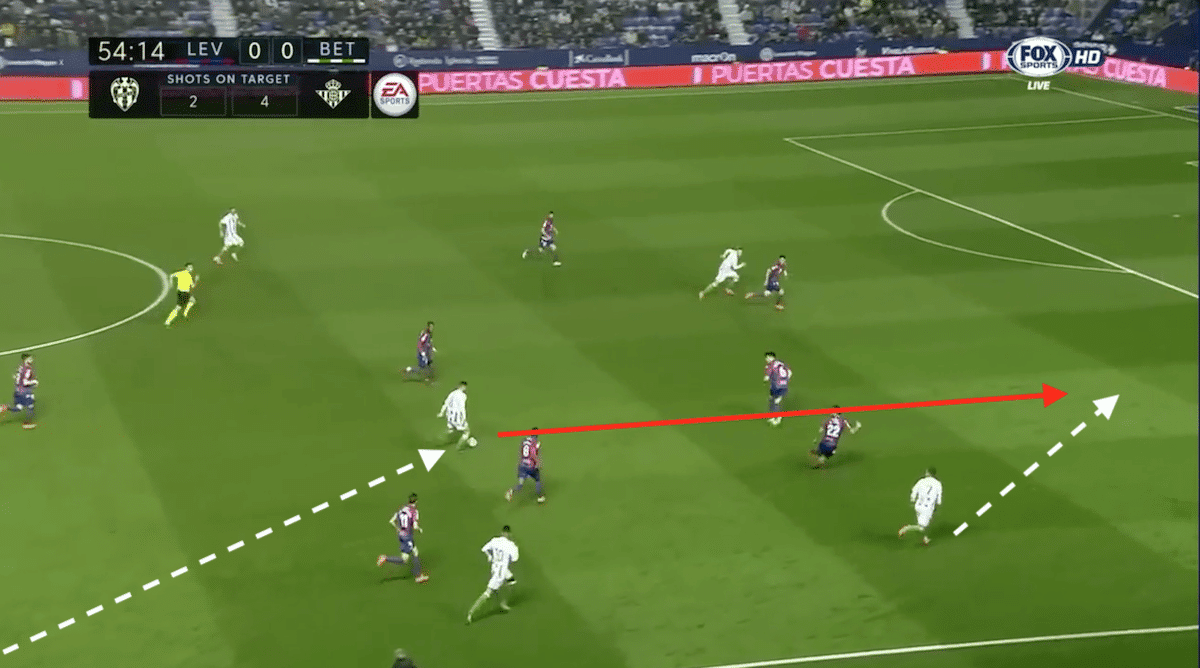 Then, having carried the ball a good 30-yards he threads a passs through two players and into the path of his team-mate on the right hand side of the pitch.

It took Ruiz four seconds in total to go from being inside his own half under pressure to putting a team-mate practically in on goal.

He's a progressive and an aggressive midfielder who seems readymade for the Premier League. For €30million he could potentially be one of the bargains of the summer the way the market is going.

If the battle for Milinković-Savić is this summer's main event then the fight for Ruiz makes up an impressive undercard.