Liverpool kick off their Champions League title defence with the toughest match of their group: Napoli, away.

Carlo Ancelotti’s side dominated in the same fixture last season with Lorenzo Insigne snatching the winner at the death. And when the two sides clashed in pre-season on neutral ground in Edinburgh, it was the Italians who romped to a 3-0 victory.

It’s never easy to come up against a side managed by Ancelotti. The former Chelse tactician has added to his ranks this summer in the shape of Hirving Lozano, Kostas Manolas and Eljif Elmas. Not all will feature tomorrow (Tuesday) night but this Napoli squad is better than the one who defeated Jurgen Klopp’s side last season.

And one the of the standout players to watch for the Partenopei just so happens to be a Liverpool transfer target. If reports in Calciomercato are true, the Reds will get an up-close and personal look at the Fabián Ruiz.

The Spanish playmaker has enjoyed a meteoric rise. He only burst onto the scene during the 2017/18 campaign and his performances for Real Betis convinced Napoli to pay his €30million release clause.

The 23-year-old adapted to life quickly in Serie A, appearing 27 times in the Italian top-flight and netting five goals in the process.

He was part of the Spain side that won the Under-21 European Championships this summer, and scored the opener in the final against Germany as La Roja ran out 2-1 winners. Ruiz also made his debut for the senior side in June.

The former Real Betis starlet is reportedly a target for a host of top European clubs and he’d fit in at every single one of them. His versatility, coupled with his ability, make him the perfect modern-day midfielder.

Last season he played in midfield and he dominated games. This term, Ancelotti has deployed him as an attacking midfielder.

Ruiz idolised Xavi growing up and he shares a number of traits with the Spain legend, yet he couldn’t be further away from him in terms of playing style. 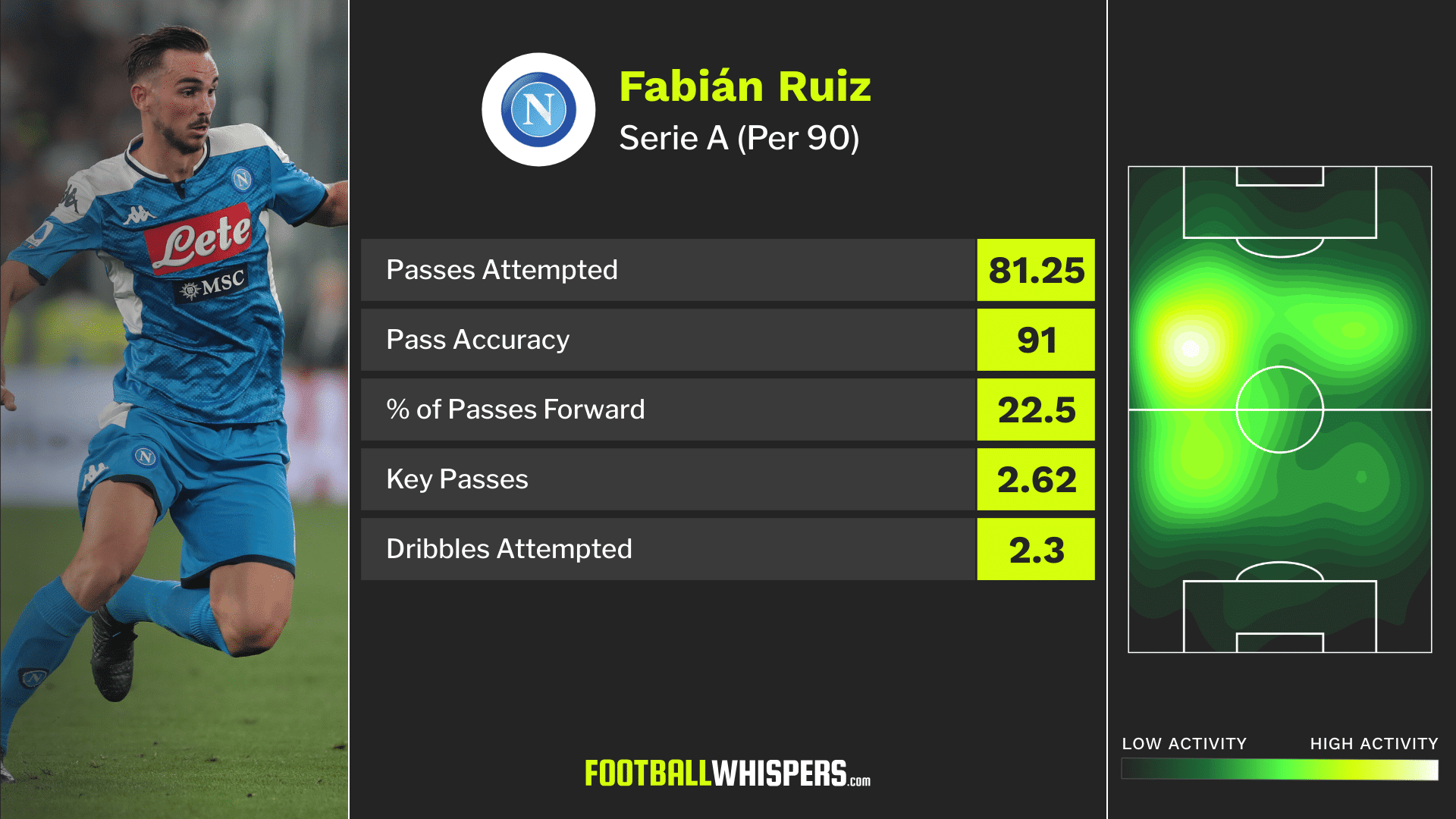 Like the former Barcelona maestro, the Napoli No.8 is tidy in possession. Since his move to Serie A, Ruiz has completed 91 per cent of the 81.25 passes he’s attempting on a per 90 basis. The 23-year-old has averaged 2.62 key passes, too, showing there’s an incisive side to his game.

But he’s much more than just that. Ruiz is an all-rounder. To go along with his impressive passing stats, he’s also posting 2.48 tackles, 1.01 interceptions and 4.07 possession regains in the middle third per 90.

His expected assists average since the switch is 0.19 while his expected goals per 90 average is 0.16. Furthermore, he’s an established ball-carrier. He’s completing 2.3 dribbles – the same as he managed during his Real Betis days – and on occasion, he’s single-handedly carried Napoli 40-yards up the pitch with a slaloming run.

That’s the real difference between him and Xavi. The latter worked in tight spaces whereas Ruiz is comfortable occupying larger areas.

Liverpool will have to wary of this and his overall influence on proceedings. He’s having an impact at both ends of the pitch, is a progressive and an aggressive midfielder who seems readymade for the Premier League.

Comfortable in a variety of roles, press-resistant and progressive, Ruiz ticks almost all of the boxes for a Liverpool midfielder. He could play as one of Klopp’s number 8s and he’d no doubt be efficient and effective as a No.6, too.

He's not one of the star names on offer on Tuesday but he could steal the show if Liverpool aren't at their best in the middle third of the park. An eye-catching performance could seal the deal if he is, in fact, on Michael Edwards' wishlist.