F91 Dudelange and Pyunik hope to consistently feature in the Champions League when they go up against each other in the second leg of the second qualifying stage. This meeting at the Stade Jos Nosbaum will take place on July 26, 2022.

F91 Dudelange have been struggling for consistency in the qualifying rounds of the Champions League but they finally seem to be hitting the sweet spot this season. After the narrow victory in the first leg, F91 Dudelange might tend to go defensive and protect the lead. Still, they have the significant advantage in the tie due to the lead as Pyunik have to come out and score.

Pyunik were quite disappointing in the first leg when it comes to the offensive chances. Pyunik will be counting on the second leg as they utilised the same in the first round against CFR Cluj. F91 Dudelange are likely to be quite defensive and this will lower the goals from the match.

F91 Dudelange vs Pyunik: Battle for the Champions League third-round

F91 Dudelange have their complete focus on the Champions League as their domestic campaign does not start until a fortnight. The first leg advantage will provide F91 Dudelange some leeway, as there was very little to differentiate the two teams in the first leg. The team will be hoping to make the most of their European experience in recent years that has largely come about because of the Europa League.

Pyunik required penalties to beat CFR Cluj in the previous round. If the game heads into penalties, Pyunik will have a lot more confidence in preparation. The Armenian team, though, are showing nervousness as a result of their first Champions League campaign in several years.

F91 Dudelange: Chris Stumpf is unavailable because of a yellow card suspension, while Eliot Gashi is ruled out because of a sprain.

Pyunik: Nikita Baranov has undergone a surgery while Sergiy Vakulenko is missing because of an unspecified injury.

Questions about F91 Dudelange vs Pyunik 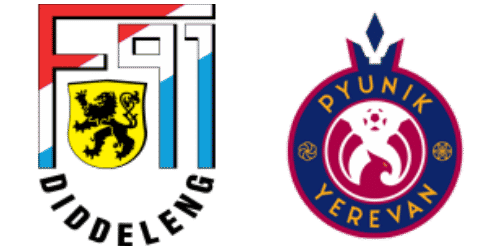 Where is the match scheduled? Stade Jos Nosbaum

Which team is the favourite to win? F91 Dudelange