For the fourth time in the 2021 calendar year, Exeter City and Bradford City will face off in a competitive fixture. While the hosts are in fine form, the visiting Bantams are struggling to string together results.

*Odds from Netbet and SBK are correct at the time of writing and are subject to change.

An 86th-minute strike from Sam Nombe allowed Exeter City to force the replay at St James Park. They are unbeaten in eight attempts by their rivals and will hope to continue their run and stretch their participation in the FA Cup. On the other hand, Bradford are winless in four fixtures and look unlikely to stop the Grecians on their own turf.

Only two of Bradford's last five fixtures have concluded with Over 2.5 total goals. The same cannot be said about Exter, who have seen four matches in the same period conclude with at least three goals during the 90 minutes of action. The Grecians will be dominating the play and should force the match to finish with an Over 2.5 total goals scoreline.

Taking out the final scoreline out of question, there is one thing for certain that goals at either end of the pitch will flow in matches involving Exeter. Both sides have scored in their last 14 outings and we should see that happening in this FA Cup replay as well. History is also on the side of our pick as three of the last four duels have concluded in this manner.

Exeter vs Bradford: Check out the best odds and the latest stats

Match Preview of Exeter vs Bradford: Grecians look to spoil the Bantams' party

Young Sam Nombe earned himself bragging rights with the St James Park faithful with a late strike in the FA Cup to give Exter City survival hope. They will be looking to build on that success and their run of just one defeat from fifteen competitive outings to oust Bradford from the prestigious English cup competition.

The Bantams will not be easily pushed over and will give their rivals a tough fight. While unable to claim victories in their last four outings, they have drawn thrice in this period, the same result that has occurred in three of their last four meetings against the Grecians. If there is any team that can upset Exeter, it has to be Bradford.

Questions About Exeter vs Bradford 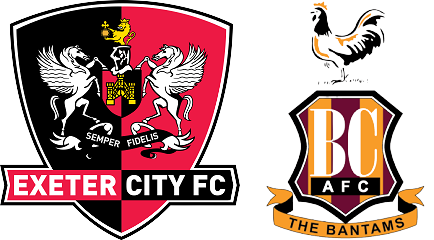 Where is the game being played? St James Park.