Tottenham Hotspur have made Ajax defender Joël Veltman one of their summer transfer targets, Football Whispers can exclusively reveal.

The 25-year-old played at right-back in the Europa League final defeat to José Mourinho's Manchester United but is also comfortable at centre-back.

Veltman would be following in the footsteps of former Ajax stars Toby Alderweireld and Jan Vertonghen should he move to Spurs.

Mauricio Pochettino alternated between a back three and a back four last season and will need extra cover if he continues with three at the back as he was, at times, forced to move Manchester United transfer target Eric Dier into the defensive line. 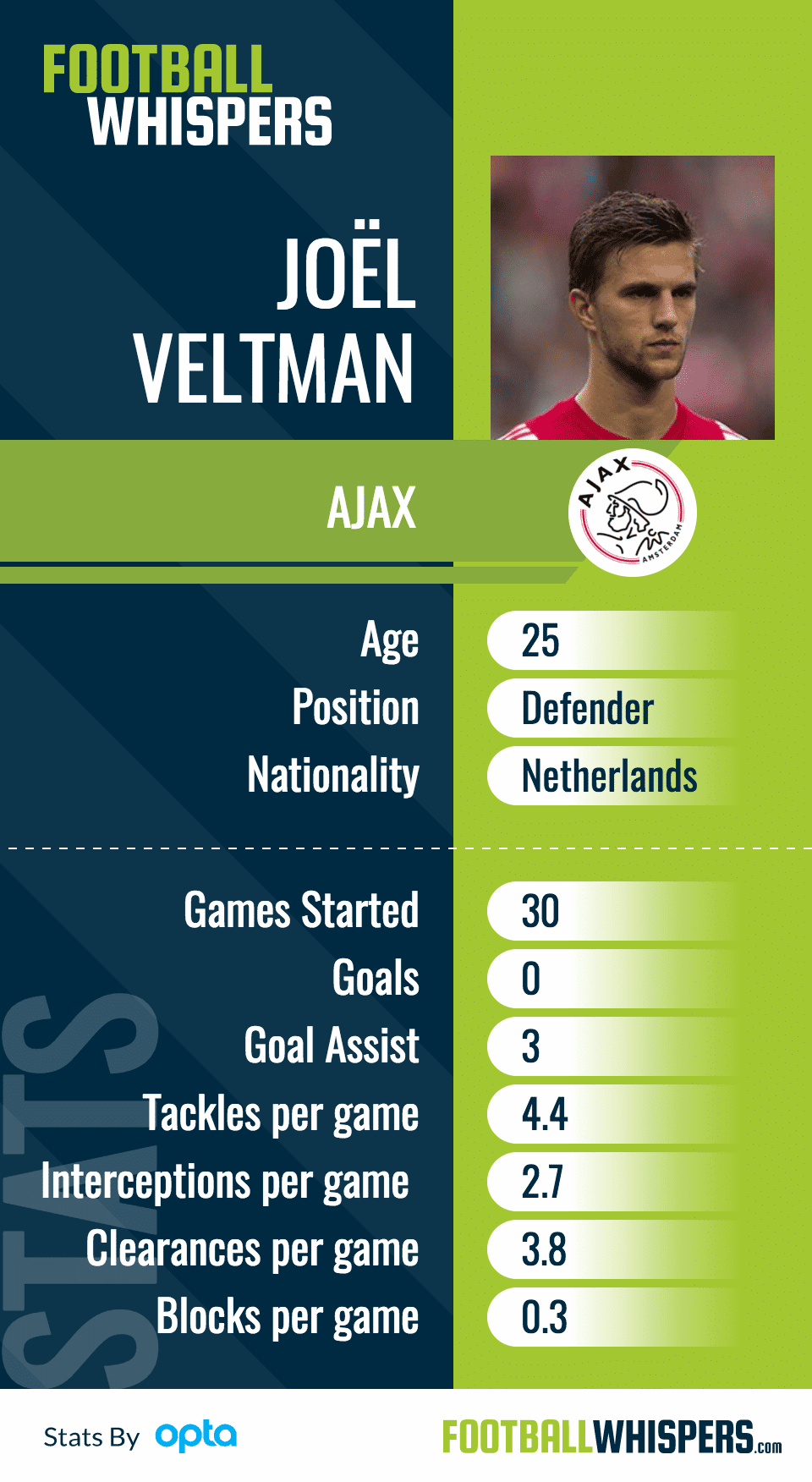 What would Veltman bring to Spurs?

Any player joining Spurs must have the very precise skill-set demanded by Pochettino to fit into the north Londoners' team. If Veltman is to play at right-back he will – like Kyle Walker and Kieran Trippier do now – be expected to contribute going forwards as well as being solid facing his own goal.

The Netherlands international is, unsurprisingly given his schooling, good on the ball and confident carrying possession forward down the flank.

In the images below, taken from the early stages of a 2-0 win over Sparta Rotterdam, he is eager to join the attack and offers an overlap down the right even before the ball has been fed into Chelsea loanee Bertrand Traore.

When Traore lays the ball off to Veltman he beats the Sparta left-back and cuts the ball back intelligent for Ajax skipper, and Everton transfer target, Davy Klaassen (circled in red) to try a shot. 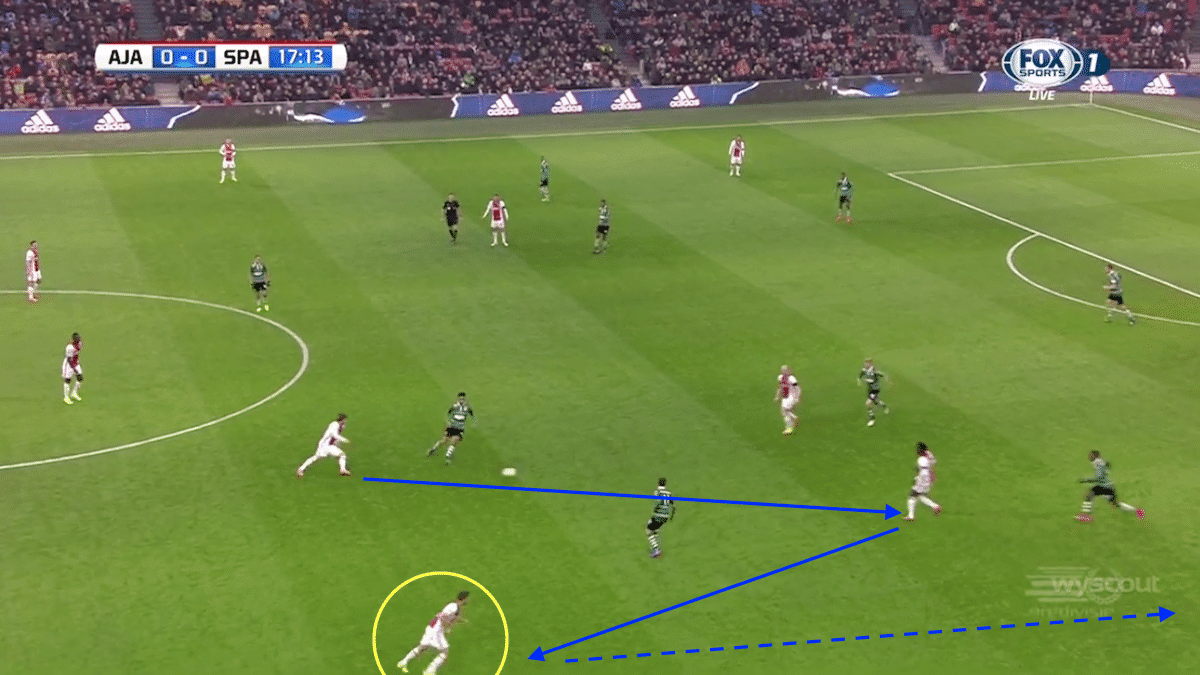 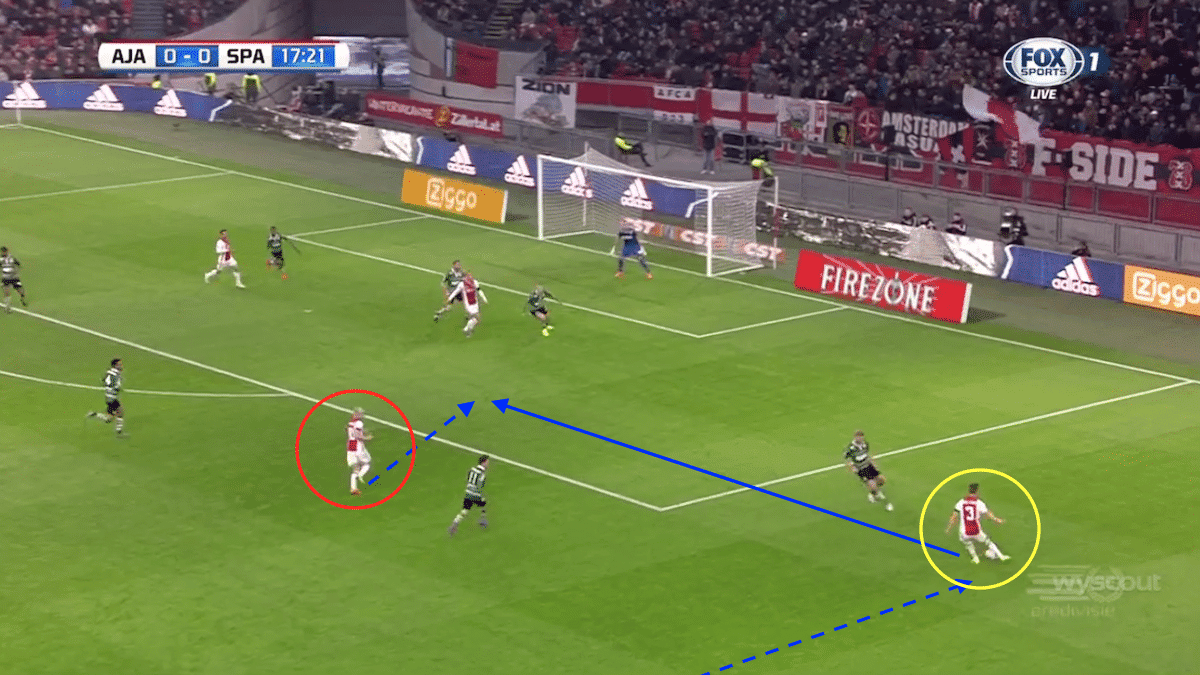 Veltman is also aggressive without the ball and is quick to press to win possession for de Godenzonen.

In the images below, taken from a 1-0 win at Heerenveen in November, he reads the situation ahead of him and nips in to intercept a loose pass.

He then weaves between two Heerenveen defenders and tries to fire in a cross which is blocked. Even with 52 seconds left on the clock, when most players would be concentrating on preserving the win, Veltman is determined to get the ball back and keep the hosts pegged in their third of the field. 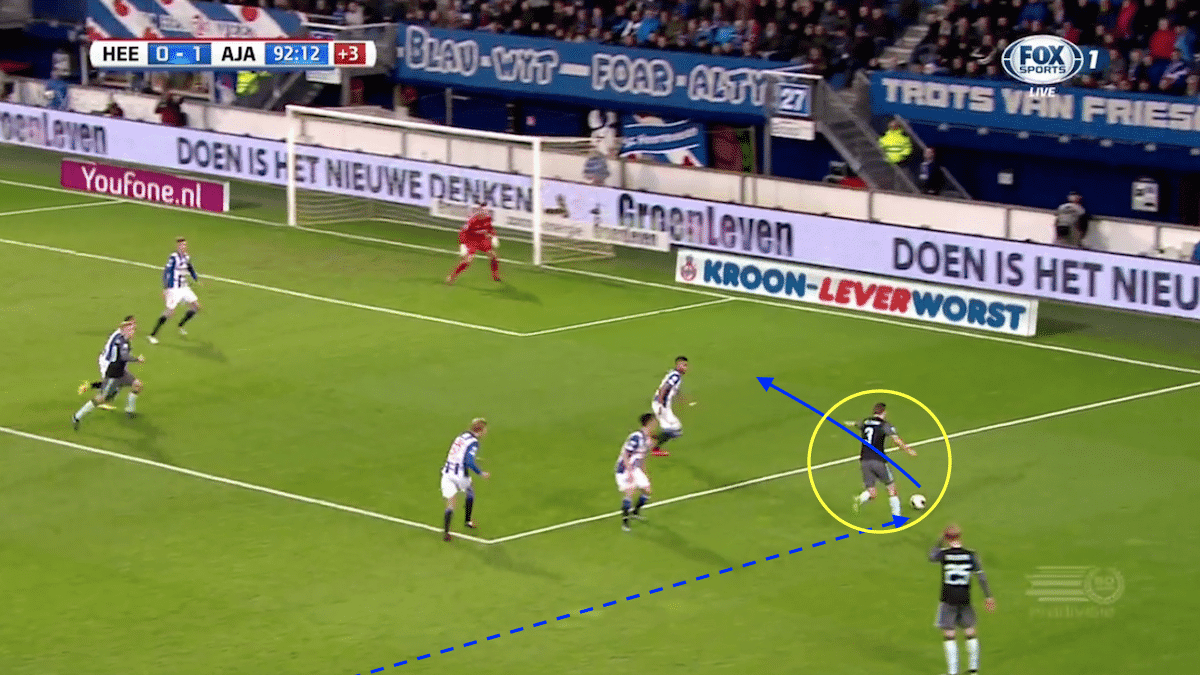 From a defensive point of view he is every bit as impressive. In the still below, taken from Ajax's 4-0 thrashing of Go Ahead Eagles, Veltman's reading of the game is key once more as he quickly squeezes up to the winger, forcing an error and winning the ball for the hosts. 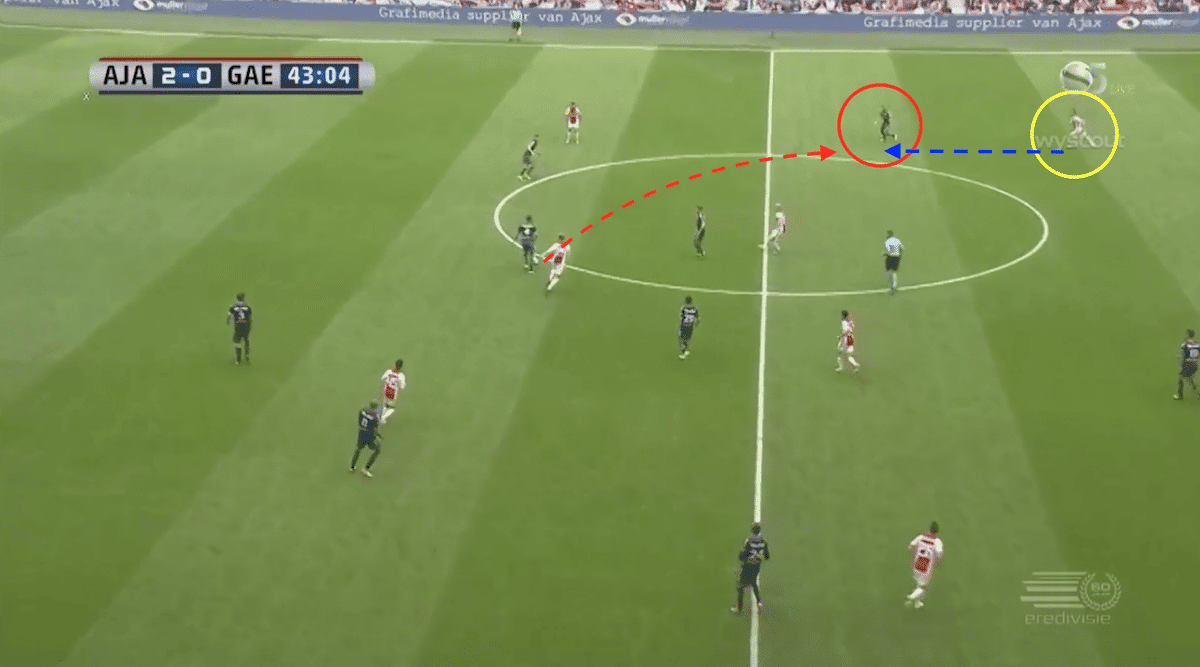 The Colombian (No.5) is unaware of the Twente player behind him (circled in red) but Veltman spies the danger and tracks the runner before getting his body between man and ball to nod back to keeper Ajax André Onana. 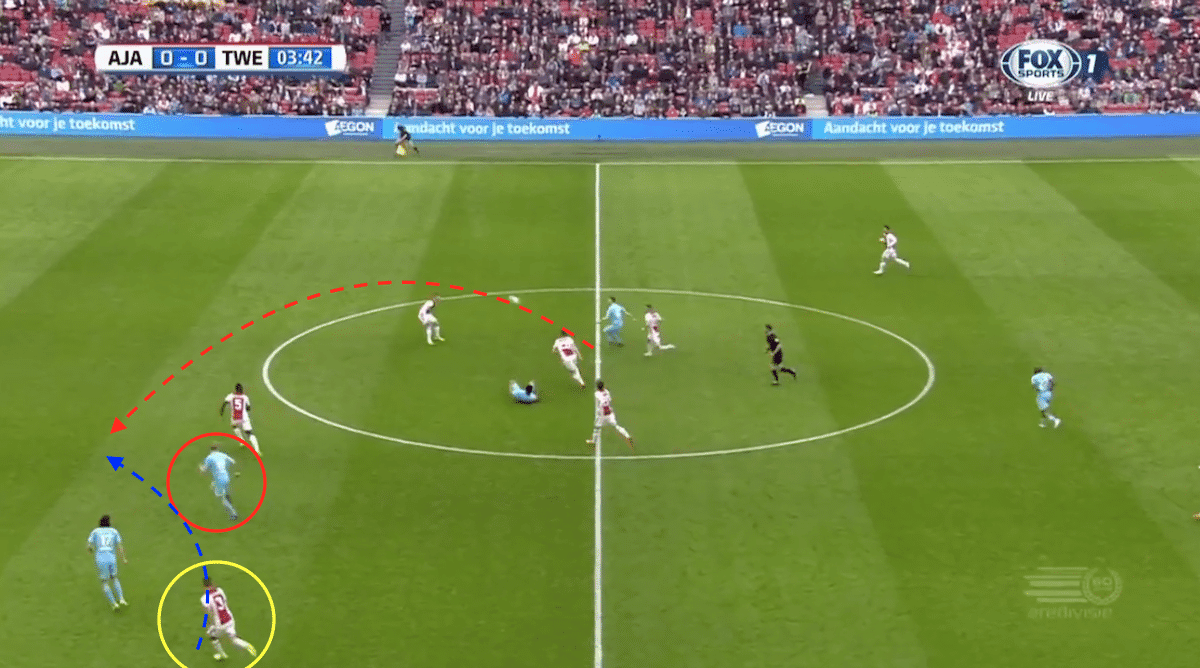 One of Veltman's biggest strengths is his tackling. With an average of 4.4 tackles attempted per game he is, by some distance, the Ajax defender who makes the most challenges per 90 minutes. The next best is Kenny Tete on 2.6 but he made just five Eredivisie starts. Veltman's numbers are over 30.

Veltman also comes out top for interceptions per game (2.7) versus the other defenders in Ajax's squad, with only midfield lynchpin Lasse Schöne (2.8) bettering that figure.

Going forward Veltman carries more threat than any other Ajax defender, attempting one dribble per match. Jairo Riedewald is the next highest with 0.8 per game. He also puts in more crosses (0.5) than any of his defensive peers.

How would Veltman fit in at Spurs?

The beauty of the Dutch international is his versatility. Spurs were fluid last season in playing either a traditional flat back four or a system with wing-backs.

The fact Veltman could slot in as a third centre-half or play right-back is ideal for Pochettino. Not least because Walker has, reportedly, fallen out with the Argentine and is a Manchester City transfer target.

Kevin Wimmer is expected to depart this summer after making just four Premier League starts during the 2016/17 season. That will leave the Belgian duo of Vertonghen and Alderweireld as the only recognised centre-halves at Tottenham ahead of next season.

With Trippier impressing in Walker's absence towards the end of the previous campaign, the addition of a player who could fill two roles would afford the former Burnley defender more first-team opportunities and ease two headaches for Pochettino.