Ahead of today’s Championship play-off final between Hull City and Sheffield Wednesday, Liam Newman sat down for an exclusive interview with Steve Claridge at the Football Whispers launch event to discuss the magnitude of the occasion, preparations leading into the fixture, and his magical 1996 winner…

Steve Claridge knows a thing or two about play-off finals; 20 years ago this weekend, the travelled striker fired Leicester City to the promised land of Premier League football with a dramatic last-gasp winner against Crystal Palace at Wembley.

It wasn’t only the perfect climax to a stunning season for the Foxes, but it would also kickstart a period of success that would ultimately pave the way for the club to replace an outdated Filbert Street with the modern 32,000-seater King Power Stadium (originally Walkers Stadium). Both on and off the pitch, promotion can reshape the landscape forever.

With the new £5.14bn television deal coming into play from the start of 2016/17, this year’s Championship play-off final arguably carries greater significance than ever before. Saturday’s Wembley final has been billed as the most lucrative game in the history of the sport, and will net the winner a prize in excess of £200m. 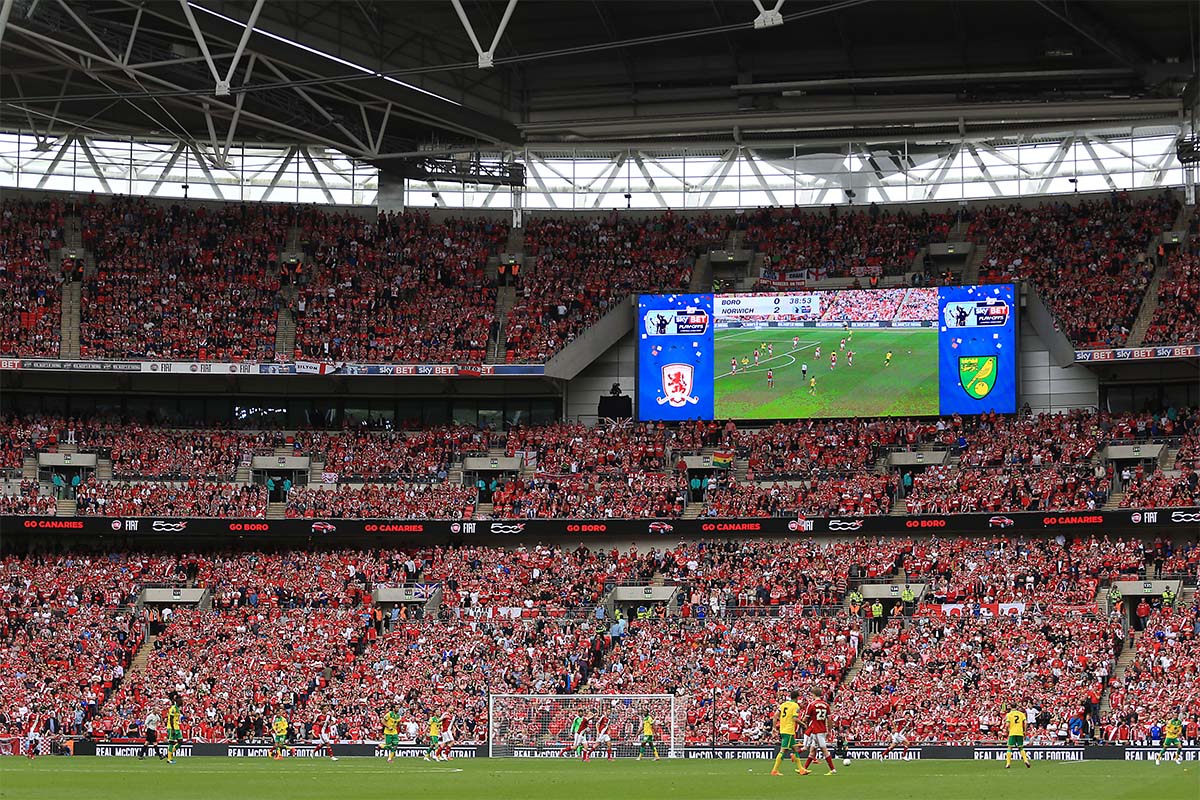 Claridge believes that those financial riches, along with the reward of playing in the world’s most exciting league, made it the greatest match in the football season during his playing days; the increased incentives only ensure that the prize is even sweeter for this weekend’s winner.

“I scored a goal in the [Coca-Cola] Cup final a year later, but it pales into insignificance compared to the play-off final.” The 50-year-old told us in an exclusive interview at the launch of Football Whispers, the world’s first football transfer predictor.

“The play-off final is undoubtedly the biggest game in the national calendar. It’s bigger than the FA Cup final, the League Cup final. It’s not bigger than winning the league like Leicester have done, but it’s the biggest single game, simply because winning it changes peoples lives. It can change the entire foundation and future of a football club.”

Such spotlight does bring a level of pressure unlike any other fixture in the campaign, though. For the Tigers and Owls, their respective season’s objective will boil down to 90 minutes (or possibly 120) of action at Wembley.

For the neutral, it generates the most glorious of atmospheres: 90,000 fans will be packed into the national stadium, with one half set for sheer euphoria whilst the other will be left in utter despair. But for anyone connected to either of Saturday’s contenders, the concoction of hope, expectation and pressure can be overawing.

Claridge, who additionally attributes the longevity of his own playing career to great preparation, identifies handling those mental stumbling blocks as the key to success on the big stage, suggesting that finding a way to treat it like any other match is critical.

“The pitch isn’t any bigger at Wembley, it’s just the occasion that’s bigger. That’s what finishes people off – not the pitch, the day or the heat, but the occasion.

“That’s what you’ve gotta manage more than anything. You can’t keep thinking about the consequences of losing. Because if you do, the season’s counted for nothing. You’ve gotta concentrate on winning, concentrate on ‘this is what happens when we win this game of football’. 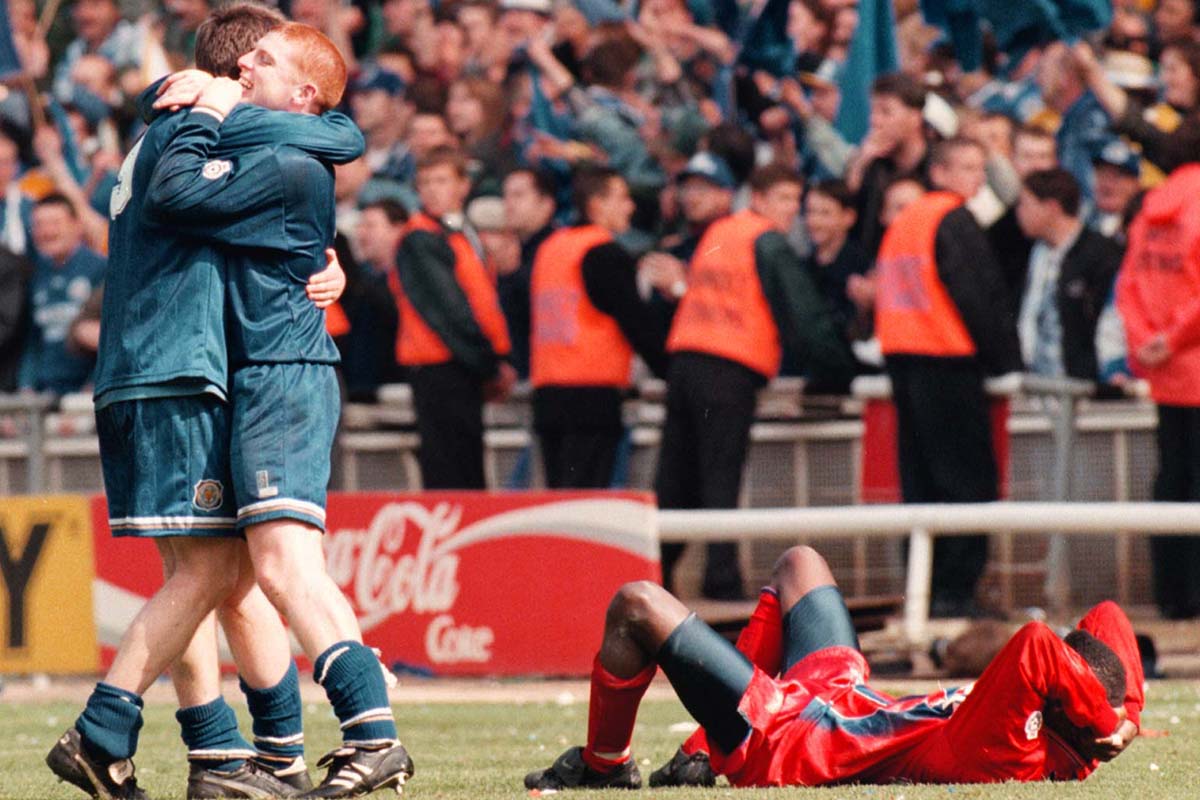 “You can’t think too much about it [during the week] because if you do you’ll worry yourself. Some people are different; some people can look at a game of football, understand what it is, and know how to approach that game. But others will worry themselves silly about it. So they’re the type of people you need to keep busy. They’re the type of people you don’t want to be leaving in a room for hours on end and they’re thinking about it.”

It certainly worked for the 5ft 11in striker, who also fired Gosport Borough to a non-league play-off final victory in 2012. His goal wasn’t only a magical moment to spearhead the Foxes forward, but it’s also one of the most memorable play-off winners as it came just seconds after Leicester boss Martin O’Neill had subbed goalkeeper Zelijko Kalac on in place of Kevin Poole ahead of the looming shoot-out.

But Claridge’s dramatic 20-yard volley ensured that the lottery of penalties wasn’t needed, and it’s a moment he still recalls with genuine enthusiasm in his voice.

“I can remember it distinctly. I got fouled on the halfway line and I was actually cramping up, and I said [to Gary Parker] ‘Parkes, just wait, please just wait for me to get in the box.’

“It’s bounced a little bit higher than I would’ve liked it. I don’t think I’ve ever got my leg higher than that again in my life – how I didn’t pull a fetlock I don’t know. But I’ve just hit it and it’s gone in. It’s probably the same as everyone else in that situation; you do something instinctively and it works. You try it another hundred and it doesn’t. I was lucky the moment came at the right time and right place.”

For the losing finalists, the play-off final is the harshest of environments. The hopes of an entire football club can be dashed in an instant, leaving the team faced with the toughest of rebuilding jobs as they look to go again the following season. In fact, only three of the last 10 losing finalists have achieved promotion in the following season.

Nonetheless, as Claridge knows firsthand, the play-off final offers an unrivalled shot at heroism. One strike can write a player’s name into the history books whilst 90 minutes could potentially unlock greater fortunes for the club both on and off the field and those are the moments that make the beautiful game so special.

Claridge concludes: “If you said to me now that you’d give me two million pounds and I won’t have scored that goal, I’d tell you to keep your money. They’re moments in life you can’t replicate anywhere else; even now they give you goose pimples.”

Money’s lovely, but the memories are what makes it worthwhile. That moment will live with me forever.”

One way or the other, Saturday’s £200m final will see a new hero crowned as either Steve Bruce’s Hull or Carlos Carvalhal’s Wednesday seal a return to the Premier League. It should be one of the showpiece events of the season.