Newcastle United are interested in taking Liverpool centre-back Joe Gomez on loan for the season, Football Whispers can exclusively reveal.

Life in Liverpool hasn’t gone according to plan for the 20-year-old since his 2015 summer move and, according to reports, Premier League debutants Brighton And Hove Albion are competing against Celtic for his signature.

However, sources have told us that the two clubs aren't the only interested parties, and Newcastle, managed by former Liverpool manager Rafael Benítez, have enquired about the possibility of borrowing the defender for the 2017/18 campaign.

The Magpies have been linked with a host of attackers, midfielders and goalkeepers over recent weeks and it appeared defenders weren't on the shortlist as the Spaniard plans for life in the top flight.

But, after enquiring about the availability of Gomez, it may signal a new direction for Newcastle in the transfer market this summer.

A loan switch could be key to getting Gomez's career back on track. He's missed the best part of two seasons having picked up a career-ending anterior cruciate ligament injury just a few days after Jürgen Klopp replaced Brendan Rodgers at Anfield.

He didn't return to training for 12 months and it wasn't until January 2017 that he made an appearance for the first-team again, against Plymouth Argyle in the FA Cup. 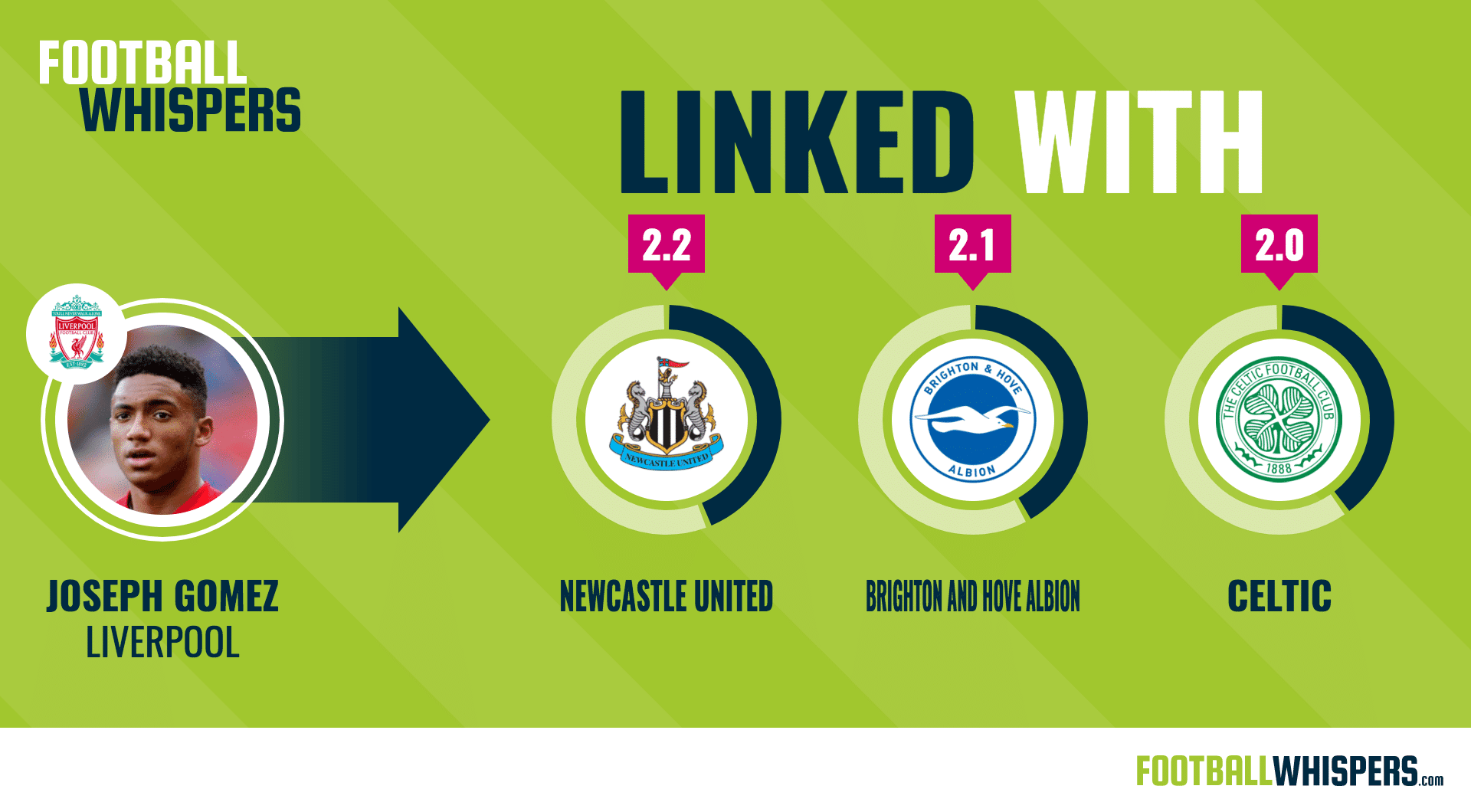 He went on to make a further two appearances last season, both in the FA Cup, meaning he's played just ten games in two seasons on Merseyside. Gomez's career has undoubtedly stalled and he's in need of regular first-team football kickstart his development.

A season under Benítez – who knows how to develop centre-backs having played a part in helping Jamie Carragher become one of the best in Europe – at St James' Park could do wonders for Gomez.

Liverpool would benefit from such a move too. Before his injury-plagued two seasons, Gomez was one of the most highly rated young English defenders. He was linked with Everton, Arsenal and Newcastle before his £3.5million move to the red half of Merseyside.

Rodgers immediately put his faith in the youngster and deployed him as a left-back to start the season.

He was part of a Reds defence which kept three consecutive clean sheets, including one away at the Emirates.

“He’s playing in his third-best position in the back four,” Rodgers said. “He’s a centre-half, but we asked him if he had confidence to play on the left side.”

“He’s a very, very good personality to play at this level, he’s very humble. He knows he’s still got a lot to learn, but we know we’ve got an outstanding talent.”

Gomez's lack of experience was evident during the 3-0 defeat at the hands of West Ham United and Liverpool's encouraging start to the 2015/16 season was derailed by September.

His dip in form was to be expected though. Young players are inconsistent, especially when deployed in unnatural and unfavored roles.

This was before the injury though. Now Gomez is a bit of a mystery and there's no harm in Newcastle chancing their arm though.

His versatility could make him a handy squad player but it's more his similarities to captain Jamaal Lascelles, who was a one-time Liverpool transfer target himself, which may be of interest to the recruitment team. Gomez is confident on the ball, composed under pressure, proactive in his approach and he's physical.

Not only could he play with Lascelles, he could also play in place of him. But would Liverpool accept such a proposal?

The Reds have certain requirements when it comes to loaning players out. Last season, Wigan Athletic wanted Cameron Brannagan but the deal fell through because they couldn't guarantee he would play in 75 per cent of their matches – a detail the Reds were avid about.

Failure to comply would have meant the Latics had to pay Liverpool a six-figure fee. The club now insist on such clauses in a bid to avoid a scenario where a talented youngster goes out on loan but is sat warming the bench.

Could Newcastle guarantee Gomez minutes in 75 per cent of their matches? If so then it may be enough to convince the player to ignore the advances of the manager who convinced him to join the Reds in the first place.

The defender said: “I have met him (Rodgers) once and he seemed really nice. It made me want to come here even more really.

“He just told me how good it is here and how he thinks he can help me get better, the opportunities I would get – things that would make me want to come to Liverpool.”

It could come down to the player. Does he spurn the advances of his former boss to play in a more competitive league with Newcastle or does he make the move to Scotland knowing there's more chance he plays every single week?

It's by no means an easy decision.