The agent of Barcelona left-back Lucas Digne has exclusively told Football Whispers the defender will remain at the club this summer despite being linked with Liverpool.

Since leaving Lille for Paris Saint-Germain in 2013, the Frenchman has been linked with a move to the Premier League. As well as being a Liverpool transfer target, Inter Milan and Lyon are also believed to be interested.

“Lucas is happy with Barça, and the club is happy with him,” Beck exclusively told Football Whispers. “Right now, he is with the France squad and enjoying the thought about an exciting future in the greatest club in the world. Barça is his only focus.

“There are always a lot of rumours about big clubs and big players, and Lucas Digne is a great player even though he is still only 23,” Beck continued.

“He has already achieved a lot at a young age, having played more than 110 games for clubs like Paris Saint-Germain, Roma and Barça plus internationals for France and another 60-plus games for Lille.

“So, of course, that puts him on the top of the list for a lot of big clubs. But the rumours are not relevant. He will stay with Barcelona.”

Digne made his debut for Lille in 2011, the season after les Dogues lifted the Ligue 1 title. His first league game came off the bench in the 3-0 win over Saint-Etienne in January and by March he was a regular starter, bursting down the left-flank and providing support for Eden Hazard and Nolan Roux.

He would start 31 games the following season and his first great moment came during the 2012 Champions League qualifier against FC Copenhagen. Trailing 1-0 from the first-leg, it was Digne’s left-footed strike – his first for the club – that brought the tie level in normal time with Lille going on to win in extra-time.

In 2013 he helped France win the Under-20 World Cup and sealed a move to Paris. Just 29 starts in two seasons followed and Digne left the French capital for Roma on loan, looking for first-team football.

Barcelona paid €16.5million in the summer of 2016 as part of their recruitment drive – which included fellow Under-20 champion, Samuel Umtiti – to add youth to their squad and the French left-back has been competing with Jordi Alba for minutes on the pitch.

In the season just gone, Digne started 19 games in all competitions, adding a goal in the Copa del Rey and an assist in the Supercopa. Alba, five years Digne’s senior, may have started 14 more times but that’s down from the 43 times he was picked in the starting XI during the 2015/16 campaign. 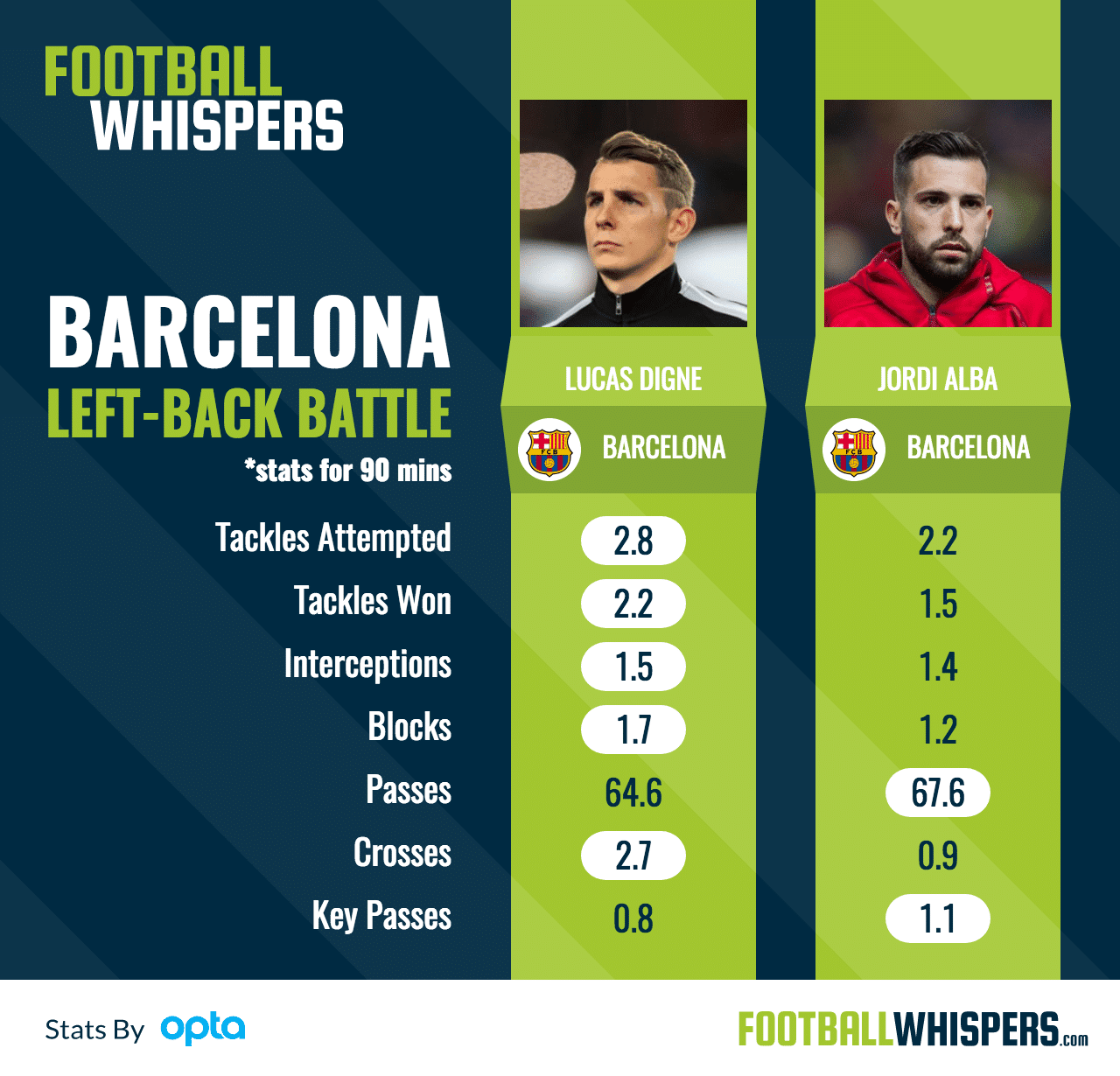 According to WhoScored, Digne attempts and wins more tackles per 90 minutes than Alba, plus he edges the Spaniard in terms of interceptions, blocks and crosses in the box. With more opportunities, the signs are there that Digne can be a key component for the Blaugrana.

It’s clear Barcelona trust the young Frenchman to take minutes away from his team-mate, and it has led to reports linking the 28-year-old with a move to Chelsea.

With Ernesto Valverde now in charge at the Camp Nou, both players have a clean slate and the chance to impress the new coach.

“Lucas has had a great first season with Barça, getting settled and playing 26 games,” said Beck. “Now he is looking forward to his second season in Barcelona with a lot of ambitions for both himself and his club, hopefully winning a lot of trophies with this superb team and their amazing style of football.”

How is a player’s market value calculated?