The Eagles' Senegalese defender Pape Souaré is out indefinitely after a horrific car accident which has left his future career in doubt and left back is a position that new Palace boss Sam Allardyce is desperate to strengthen.

The man he replaced, Alan Pardew, had been linked with a move for Tottenham Hotspur’s substitute left-back Ben Davies – as first mention by Football Whispers – and then Kieran Gibbs emerged as the rumoured target after Allardyce’s appointment.

“You’re never satisfied, are you,” said Allardyce when asked about potential January additions.

“You can’t be a manager and be satisfied when there’s a window coming up. It all depends upon what the others do, what’s available, what you can afford, who wants to come. And you’ve got to try and hope nobody comes in for any of your players.”

We understand the London club have already held talks with Montpellier and the 23-year-old, who’s contract runs until 2019.

‘Big Sam' has history with this type of move, going way back to when he signed Bruno N’Gotty and Jay Jay Okocha from France for Bolton Wanderers, then more recently, he used his scouting network and his contacts to move for Diafra Sakho when he played in Ligue 2 for FC Metz during the former England boss' time at West Ham. 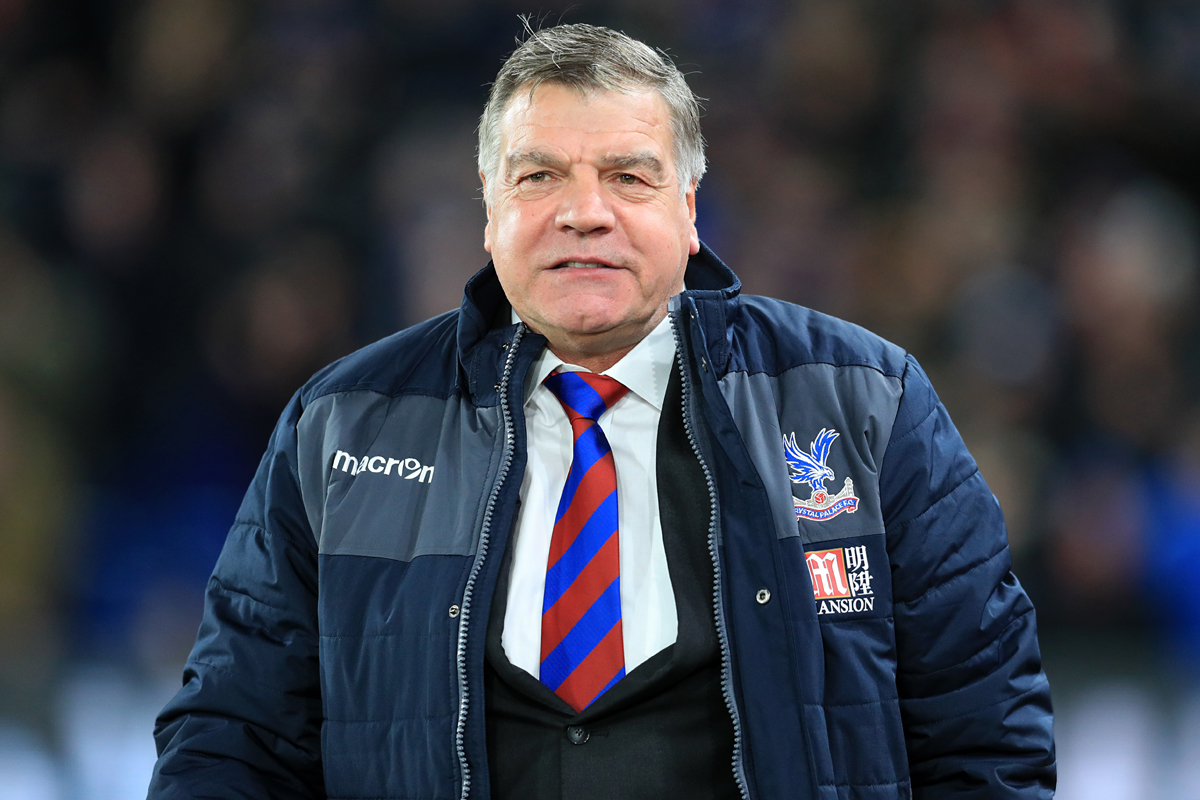 Even this summer, the Black Cats' record transfer move for Didier N’Dong felt more like an Allardyce signing than something David Moyes had targeted. The ground work would have already been done before Allardyce left for the England job.

It’s hard to imagine the player not being interested in a move to the Premier League, having joined La Paillade in 2015 after three years in the first-team of FC Sochaux.

He initially joined in January of that year, but returned to Les Lionceaux on loan until the rest of the season before moving properly in the summer.

The Sarcelles native is still on his original deal and is being paid around £6,000 a week. Joel Ward has been the starting left-back at Palace this season and he earns £35,000 a week, with Souaré just below on £30,000k – so Roussillon could realistically up his wage five-fold if he was keen on a move to Selhurst Park.

However, Roussillon is a key member of the Montpellier first-team, only Daniel Congre – also linked with a move away and young Morgan Poaty – have played in that position.

They may not be keen to sell their left-back, but an offer of around £5million, although peanuts to Palace, would be enough for them to make a profit on their original investment.

Able to help the Frenchman settle, he will find several countrymen in the Eagles squad, plus a few others who speak French and have played in Ligue 1.

Although there is no one he has played with before, he will find allies in Yohan Cabaye, Steve Mandanda and Mathieu Flamini.

Palace currently sit 17th in the Premier League, it’s a position that Allardyce has found himself in before and he knows what it takes to fight out of the relegation zone, so you must believe he knows the type of player that can make an impact in this squad.

Over the 20 league games this campaign, they have conceded 37 goals. Only Hull and Swansea have let in more, that has to change.

In terms of where teams find success, 19% of the opposition's shots come from the Palace left, but that’s the same number on the opposite wing, so teams haven’t isolated Ward.

Is Roussillon an upgrade on Joel Ward? 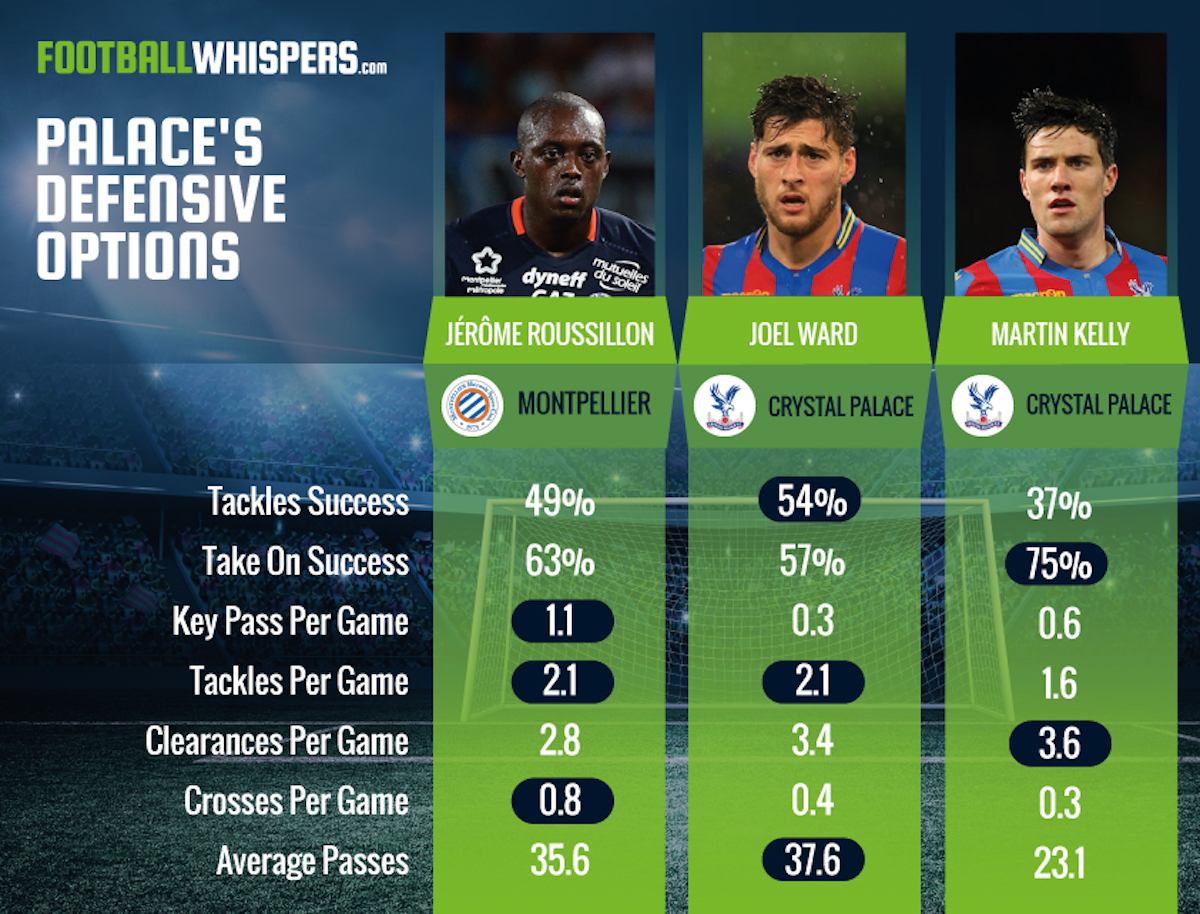 The 27-year-old has performed well this season, averaging six defensive actions per game and he hasn’t made an error that has led to a goal.

He wins 54% of his tackles and averages 2.1 tackles per game – which is more than any other defender in the squad.

Where the Montpellier man edges out both Ward and Martin Kelly is on the attack. Although he has the same number of assists as the Palace man – Kelly has two – the Frenchman has made 16 key passes this season, averaging 1.1 per game and makes 0.8 crosses per 90 minutes.

Ward and Kelly make 0.3 and 0.6 key passes respectively and average less in crosses too. That’s what will attract Allardyce most, as he looks to increase the creativity from that side of the pitch. Out of Palace’s 30 goals, 10 have come from headers, add more danger from the wings and they could increase that number. Something Christian Benteke would really benefit from.

What would Roussillon bring to Crystal Palace?

Roussillon is a forward thinking full-back, almost playing as a winger with Montpellier’s midfielder’s coming in and playing narrow. He is much shorter than both Ward and Kelly, standing at 175cm tall, so he could be targeted with long diagonal balls, but he is stocky, strong and has great acceleration.

In the past, if Montpellier have been struggling with injuries, he has even played all down the left, filling in as a winger and left-midfielder. This season, he has started every game at left-back

Bombing down the left flank, even though Montpellier don’t have a target man, he is always looking to play in the early cross. If defenders stand off him, he’ll take a touch before curing in deliveries with his left-foot. Yet, get too close and he is willing and able to knock it past and run beyond his marker.

Against SC Bastia earlier in the season, you can see two examples of what Roussillon does best. In the graphic below, you can see that the defender is faced with four defenders, plus his own team-mates blocking his path down the wing. 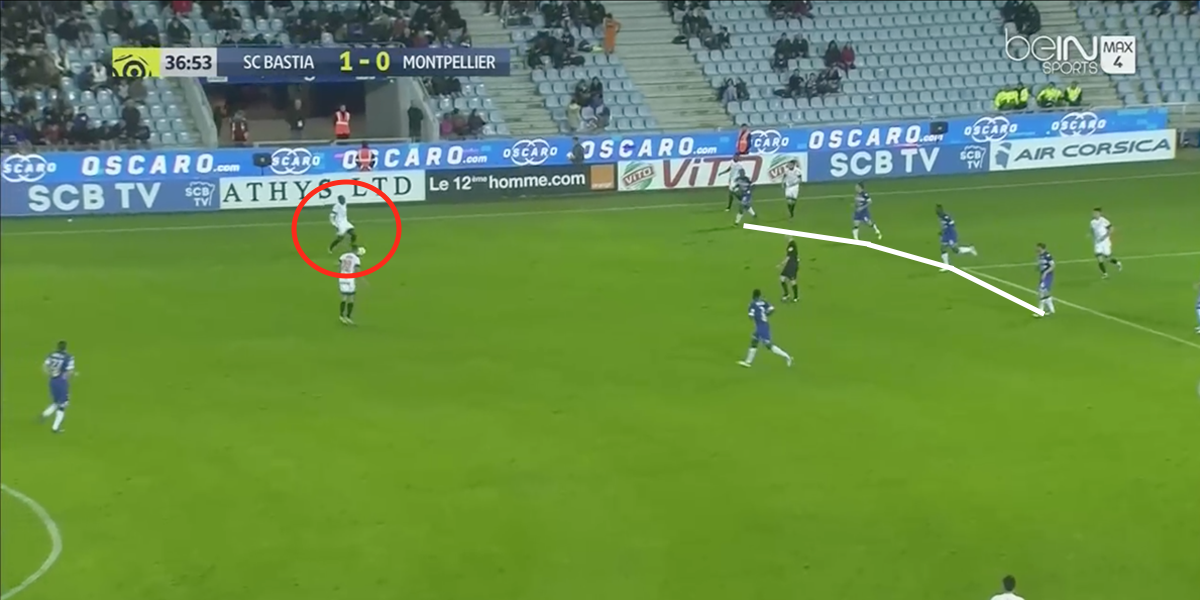 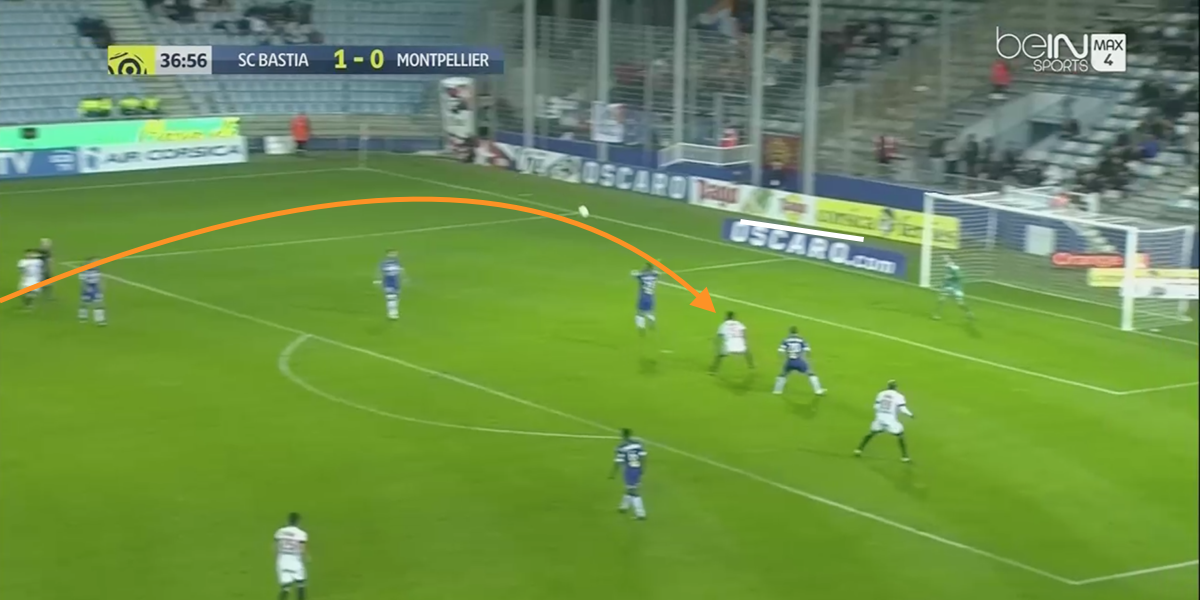 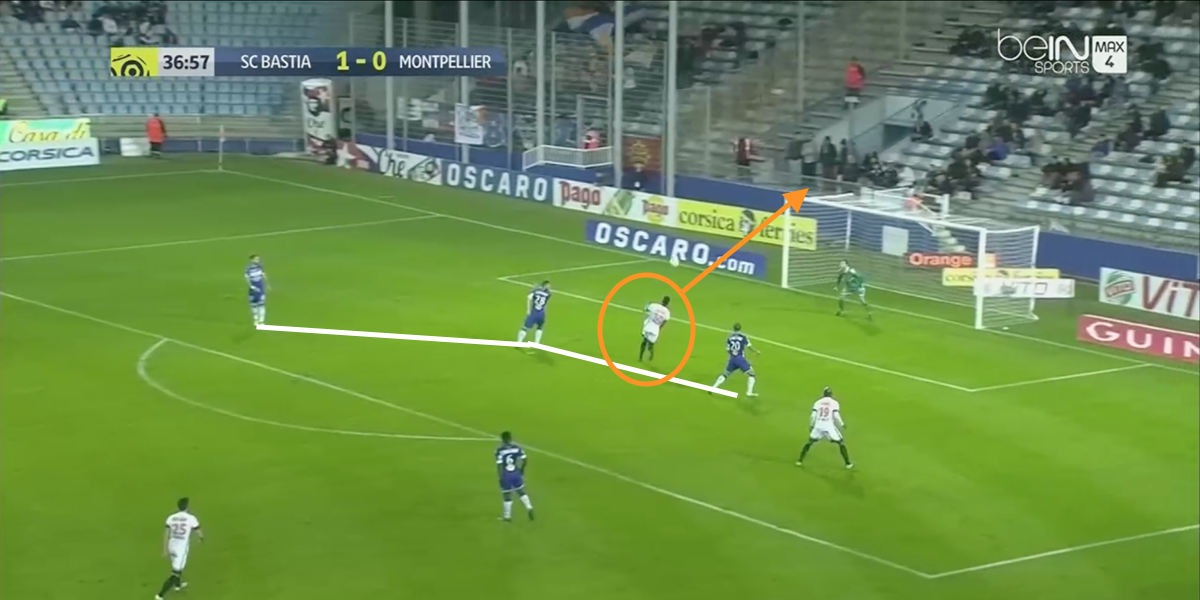 What he does is take a touch and play in an early and dangerous cross. He picks out Steven Mounié perfectly, however, the striker can’t make proper contact, despite taking up a great position between the two centre-backs. He should have really done better with the chance.

Starting the attack down the left in the second half, he passes the ball inside, then as you can see below, with his marker’s attention drawn to the ball, Roussillon is off on his run. He bursts down the left. 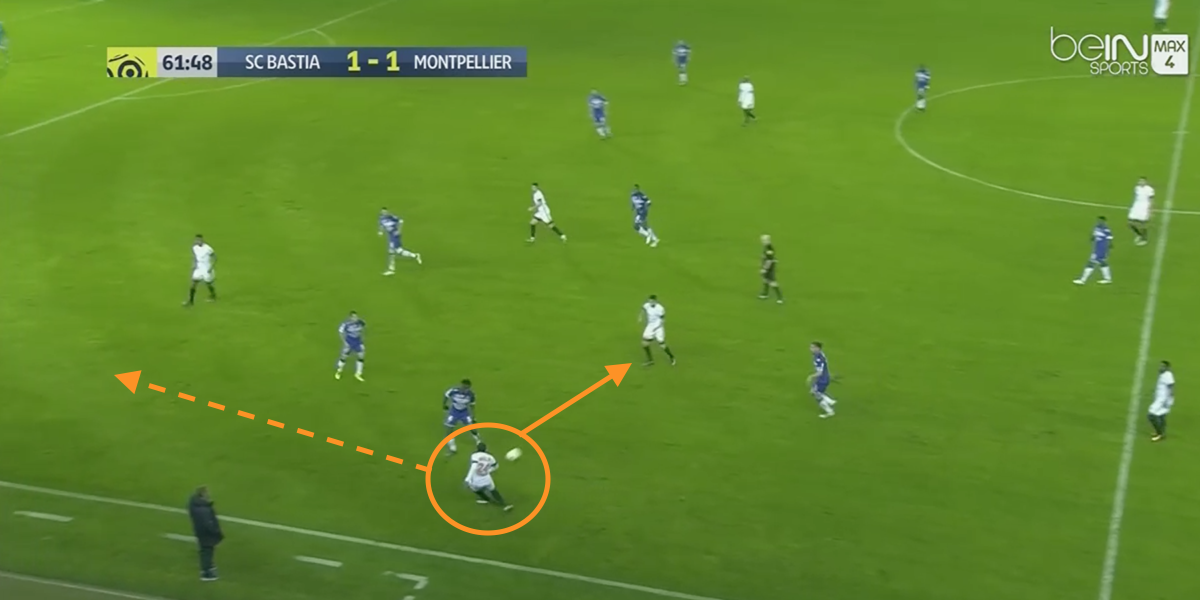 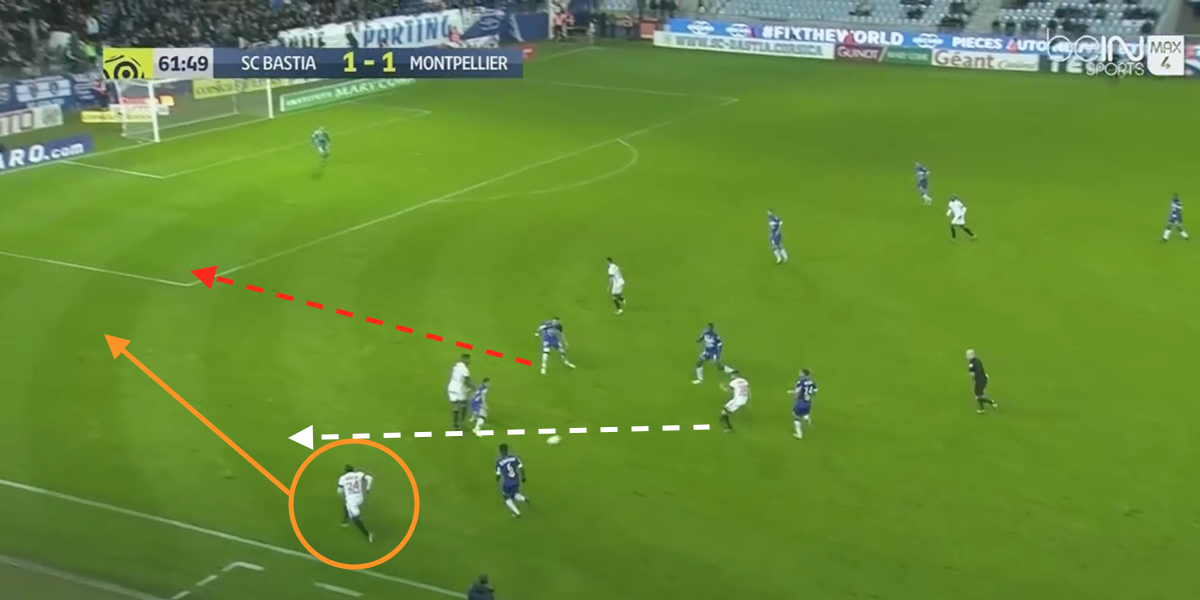 The return pass takes out two defenders and the left-back is able to run onto the ball and get to the edge of the box. Bastia’s centre-back and former Arsenal man, Sebastien Squillaci, has to cover the run, he does well to close the space, but he leaves the forward unmarked. The cross is decent, but again a poor touch sees the chance go to waste.

Roussillon is a great attacking option, he loves to run from the left-back role, but is a good defender too. He is physically strong, so could deal well with the rigours of the Premier League. He times his tackles well and can compete with both the stronger wingers and the quick, tricky opponents.

Better in the final third than Pape Souaré, also signed from Ligue 1, Roussillon would be a very good option for Sam Allardyce and Palace if they were able to get a deal done with Montpellier during the January window.

Exclusive: Celtic To Miss Out On Sam Larsson

EXCLUSIVE: Why Ralf Rangnick Is Against Keïta Joining Liverpool

Behind The Lines: Darren Anderton