Champions elect Celtic are readying themselves to lose 32-goal Dembélé, who joined last summer from Fulham and has been a hit at Parkhead.

Football Whispers have learned 22-year-old Azmoun, who has scored four times in the Russian Premier League this season, is one of Brendan Rodgers' top targets to replace 20-year-old.

Signed for just £500,000, Dembélé is a Chelsea transfer target with Manchester United, Liverpool and Tottenham Hotspur also interested. Dembélé is expected to fetch up to £40million if he leaves the Bhoys this summer.

Azmoun, who is the youngest Iranian to play in a European match, has netted 16 times in just 31 league starts for Rostov since moving from Rubin Kazan in 2014. 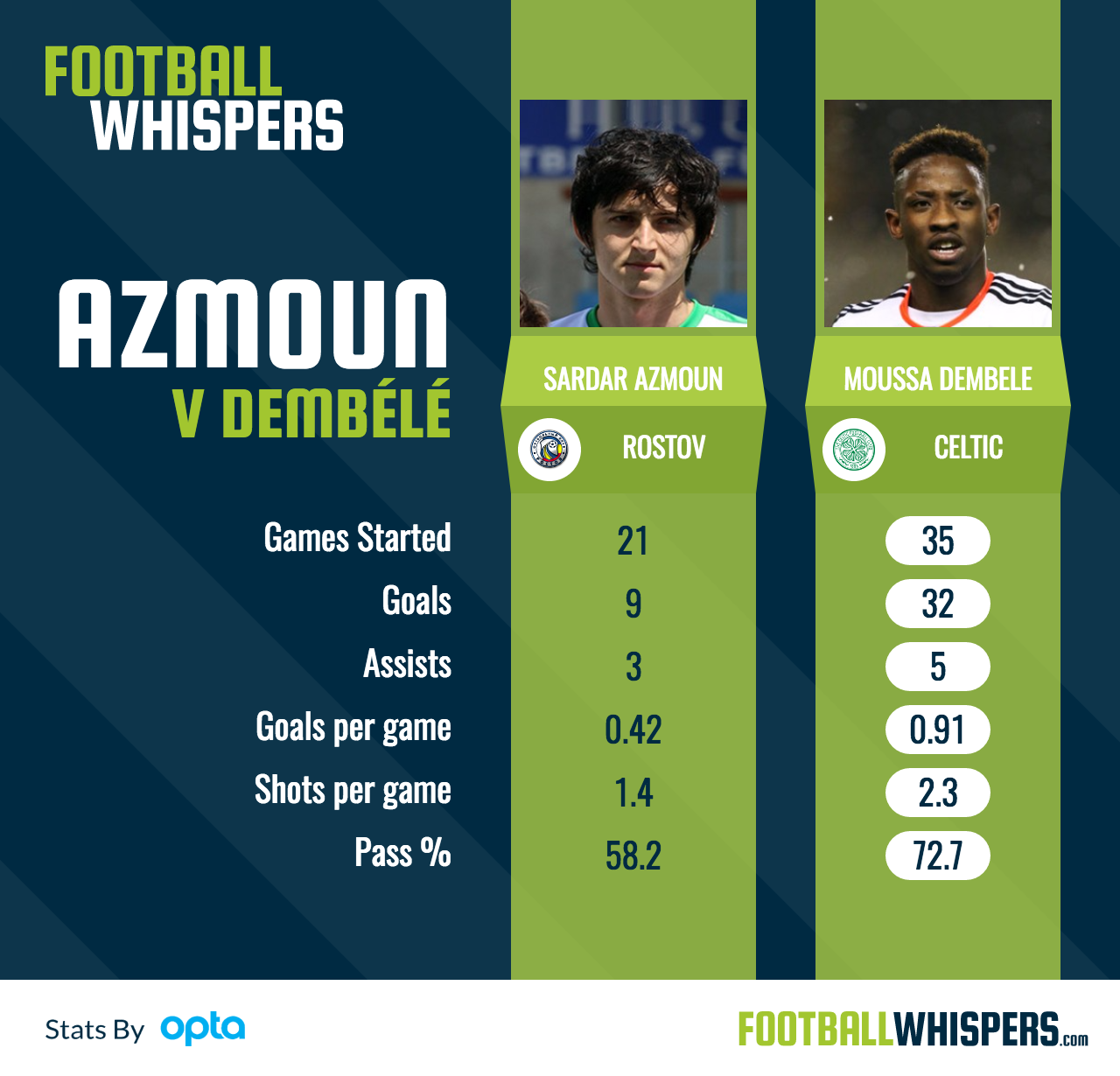 What would Azmoun bring?

Although his scoring record has not been prolific throughout his career, Azmoun has shown himself to be a clinical finisher this season, scoring against Bayern Munich, Atletico Madrid and Ajax in the Champions League.

His goal against Bayern (below), in a stunning 3-2 win in Russia, was the perfect example of his close control and dribbling ability.

Having driven into the box he is confronted by Jérôme Boateng. But Azmoun shows complete disregard for the German World Cup winner, cutting back onto his right foot and curling past Manuel Neuer. 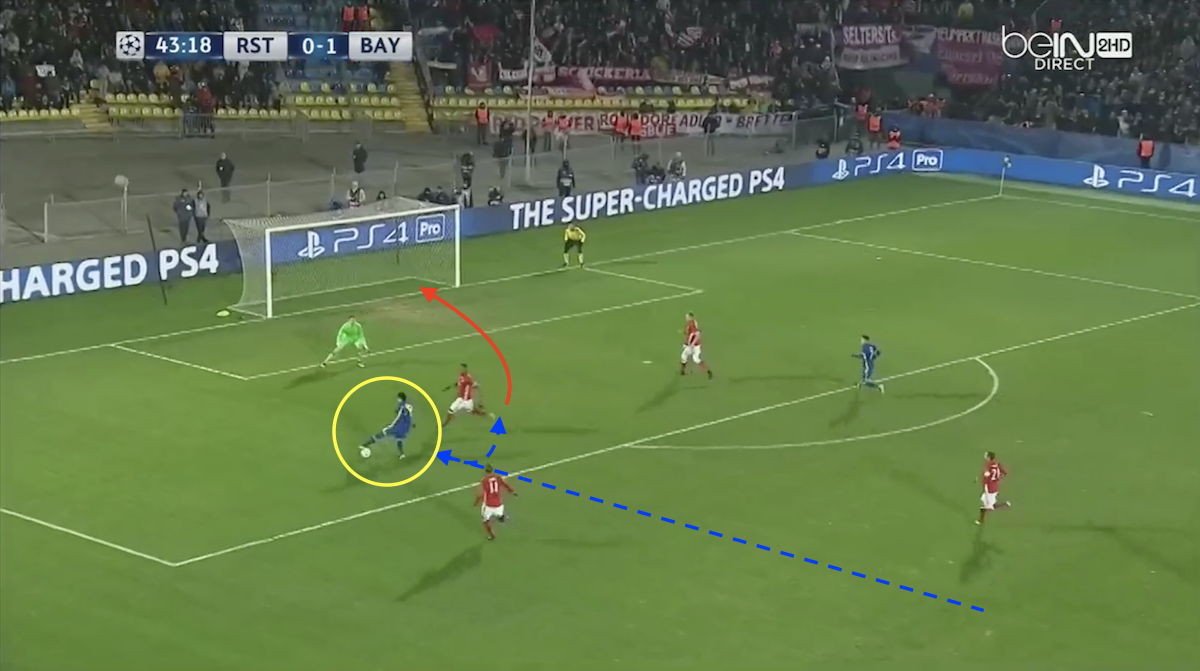 But it is not just on the ground that Azmoun thrives. Standing at 6ft 1in, and in spite of his slight frame, he is good in the air and the header against Arsenal Tula (below) is a good example.

The cross is swung in from the right and, despite being behind his marker, Azmoun connects, generates the power needed to hit the target and directs the cross into the top corner to score. 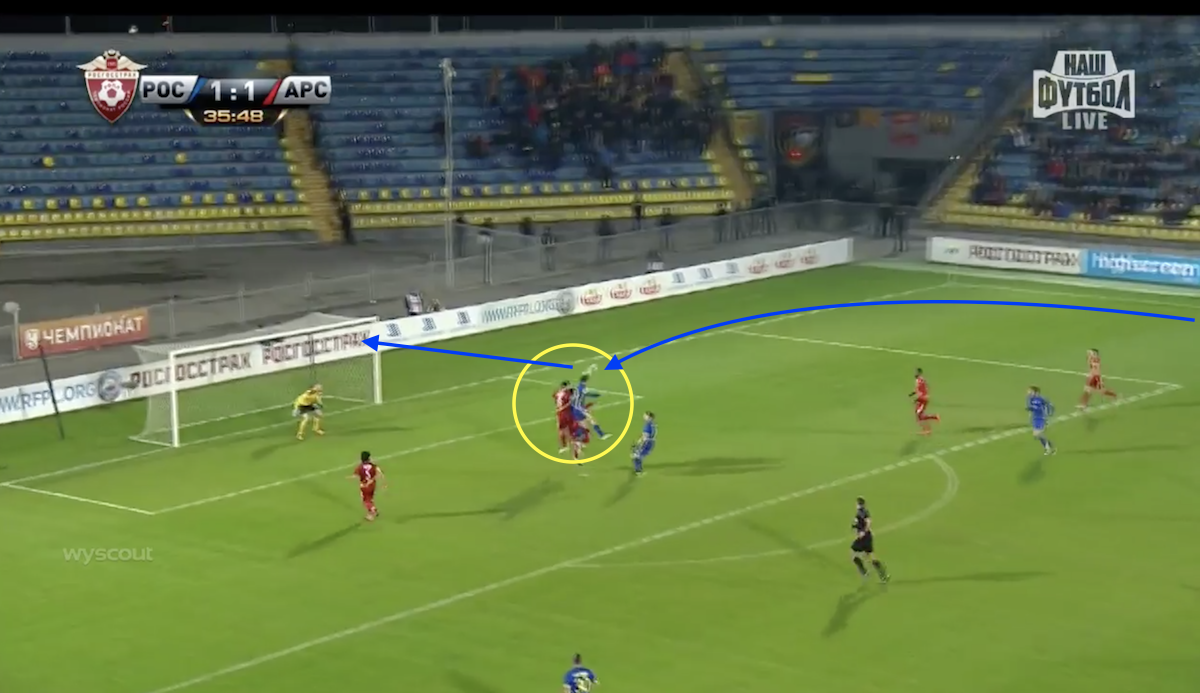 Another big strength is his movement. Azmoun is rarely caught standing still and makes life hard for those marking him by making intelligent runs and getting between defenders.

In the example below – against Korea while playing for Iran – he runs across the centre-back to make an option for the Iranian player in possession. 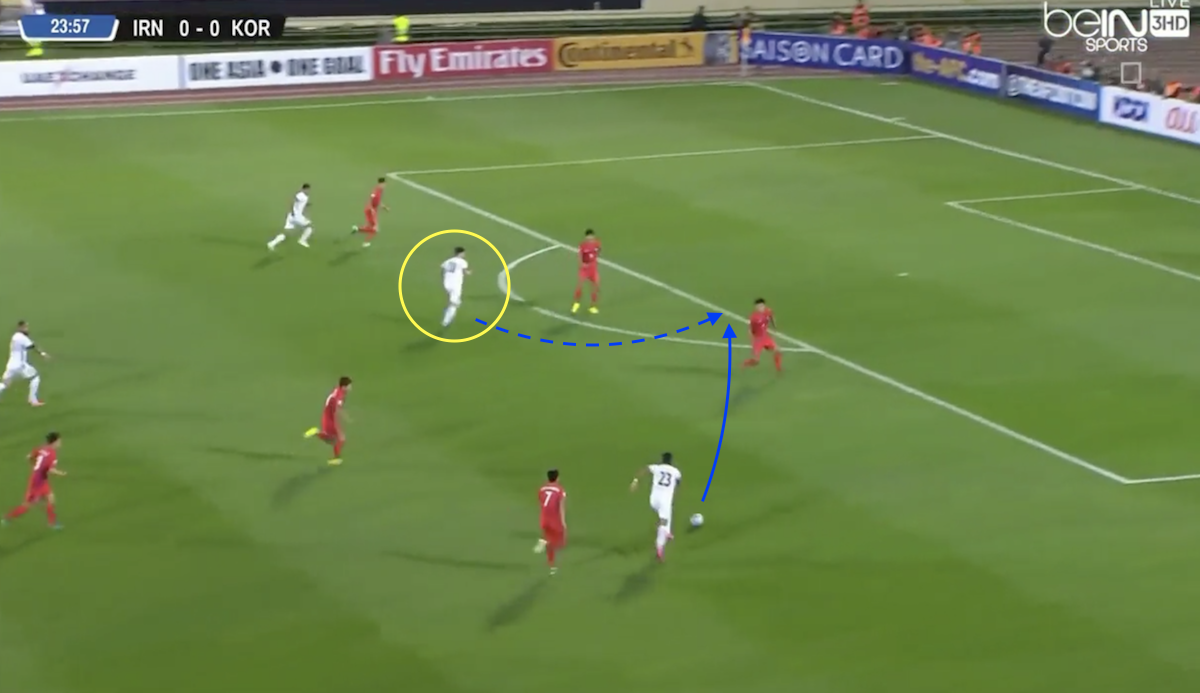 Ramin Rezaeian spots Azmoun's run and delivers the ball to the area where Azmoun is on hand to fire past goalkeeper Seung-Gyu Kim. 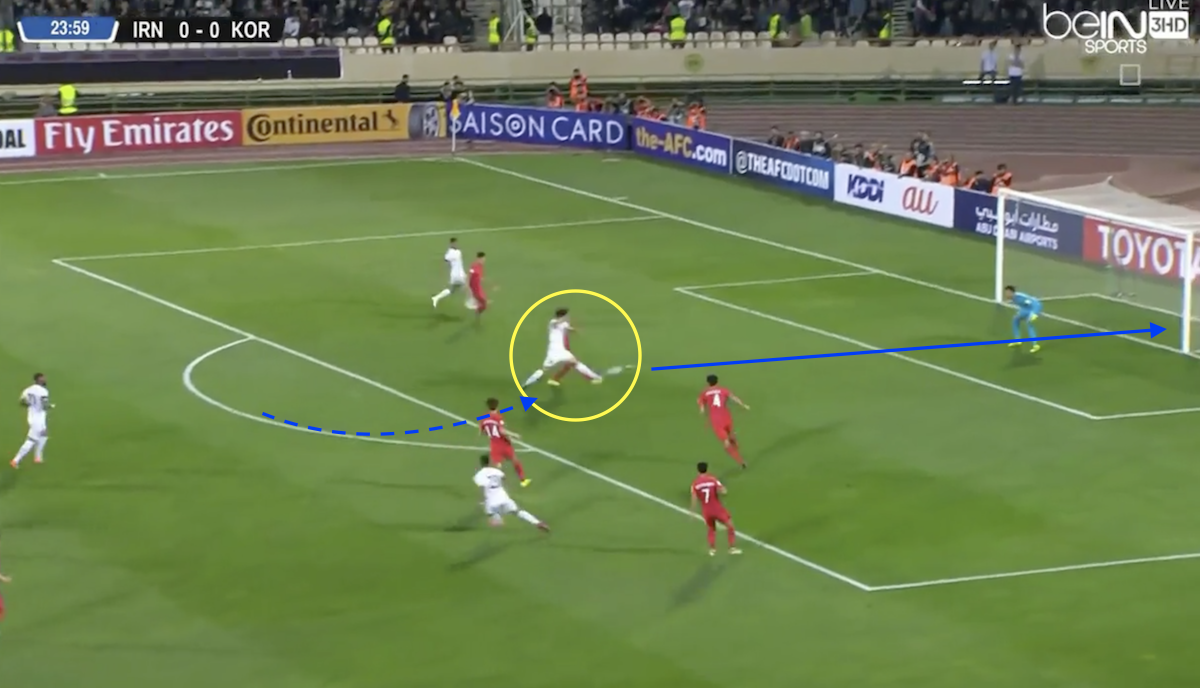 Can he replace Dembélé?

Herein lies the real issue. If Dembélé leaves Parkhead this summer, and with every goal he scores it becomes increasingly certain he will, whoever comes in will be judged against the French Under-21 international.

After bagging 15 Championship goals in his final season at Fulham there was no doubt Dembélé had ability. But his success at Celtic, where he averages nearly a goal per start, says he has either reached a new level under Rodgers or found the SPL easier than the Championship. 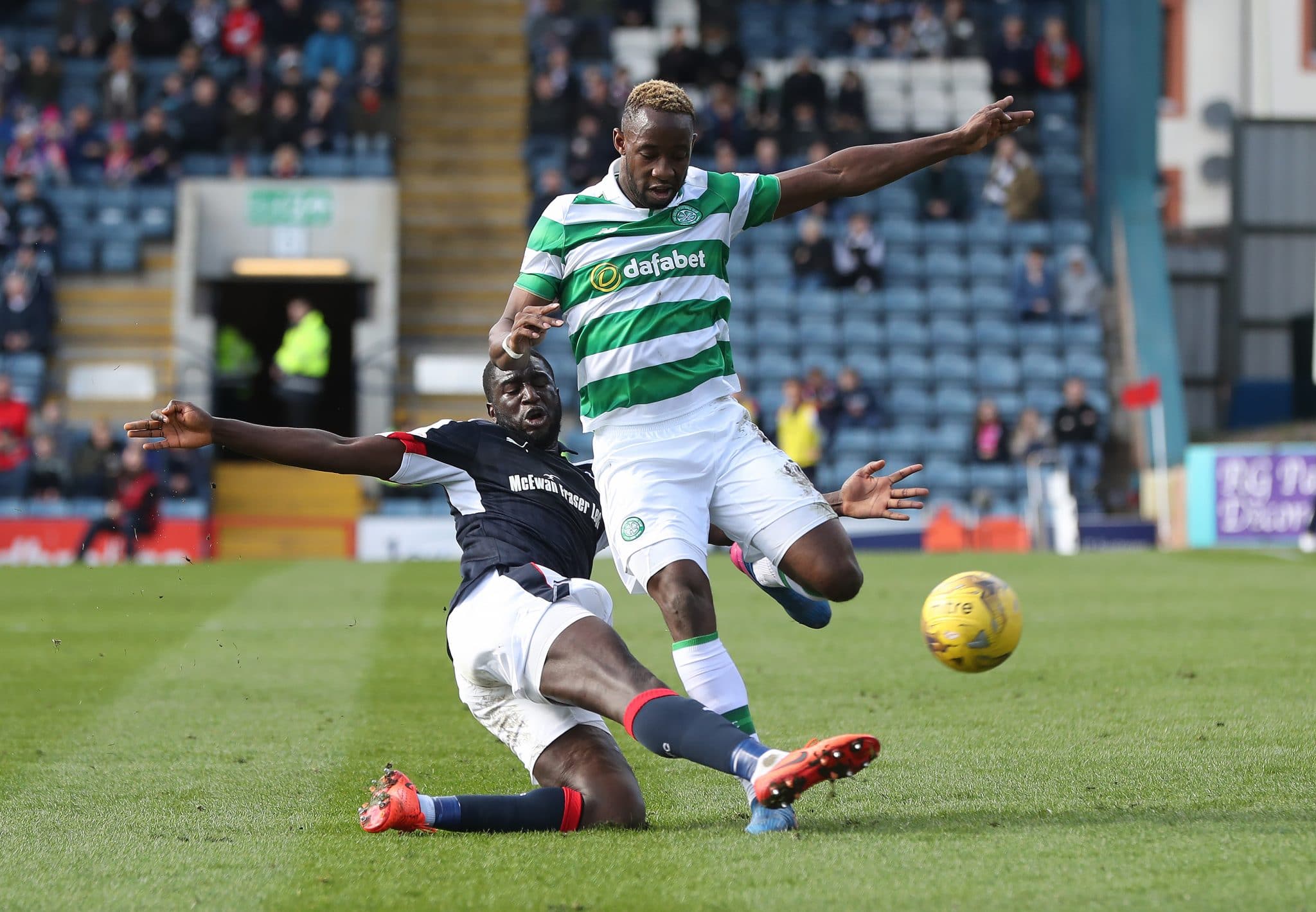 READ MORE: 10 PLAYERS SCOTLAND MUST BUILD THEIR FUTURE AROUND

His range of finishing is particularly impressive; scoring from inside the box, outside the box, from acute angles, with poacher's efforts, free-kicks, penalties and more.

Dembélé is more than just goals though. He dribbles more than Azmoun and likes to cut in from the left before opening up his body to shoot. Both are good link-up players but if there is an aspect where Azmoun has the edge, it is in the fact he brings others into play.

Azmoun is usually one of two forwards in a 5-3-2 system at Rostov. A big test would be whether he could operate as a lone forward in Scotland. However, with players of the quality of Scott Sinclair, James Forrest and Tomas Rogic behind him there should be no shortage of ammunition.

Dembélé has proven to be the kind of player that only comes along very occasionally for Celtic. If Azmoun ends up at Parkhead he will only have to replicate a fraction of the Frenchman's feats to be considered a roaring success.

NOW READ: WOULD MOUSSA DEMBELE BE A GOOD FIT FOR TOTTENHAM HOTSPUR?