On all ten occasions, his side has lost. Perhaps even more shockingly, the Portuguese tactician has witnessed his team score just one goal in that run – a 71st-minute strike from Wayne Rooney for United against Tottenham in May of last season. The Red Devils were already 2-0 down at the time.

Mourinho has come in for stern criticism of late for his approach in games against high-calibre opposition. The former Porto and Inter Milan coach is viewed as being risk averse, overly negative and uber-cautious in the face of a key encounter against one of the Premier League's best sides.

This is beginning to rankle with a large section of the United fan base, who feel their club should aspire to a more adventurous approach, longing, clouded maybe by nostalgia's rosy haze, for the days of Sir Alex Ferguson's reign, all swashbuckling wingers and cricket scores.

But Mourinho's philosophy in such scenarios should come as no surprise to anyone familiar with his career. Diego Torres, the Spanish journalist who authored The Special One: The Secret World of José Mourinho, laid out the United manager's seven-point blueprint for success in high-stakes games thusly:

1) The game is won by the team who commits fewer errors.

2) Football favours whoever provokes more errors in the opposition.

3) Away from home, instead of trying to be superior to the opposition, it’s better to encourage their mistakes.

4) Whoever has the ball is more likely to make a mistake.

5) Whoever renounces possession reduces the possibility of making a mistake.

6) Whoever has the ball has fear.

7) Whoever does not have it is thereby stronger.

Essentially, this philosophy boils down to what the manager feels is a pragmatic approach to limiting his own side's mistakes and capitalising on the opponent's. But it is, unquestionably, inherently unadventurous, reactive and, often, too passive.

Plus, it relies on the assumption that the opponents will make costly errors. But what about when they don't? Or what if your own players are unable to take advantage when they do? At that point, it would seem, the best outcome Mourinho's team can hope for is a 0-0 draw, such as those we have seen in United's trips to face Liverpool at Anfield this season and last.

To varying degrees, the rest of the top six are all more proactive in their approach to these games that United are, than how Mourinho wants to be. At one end of the spectrum is Manchester City, who want to dominate the ball and carve their opposition open through rapid circulation of the ball. Arsenal, at least in their peak a decade ago and occasionally still, hope to do similarly.

Somewhere in between lie Spurs, Liverpool and Chelsea, to varying degrees utilising counter-pressing and swift transitions as a means of actively forcing errors, rather than sitting back and waiting for them to occur. 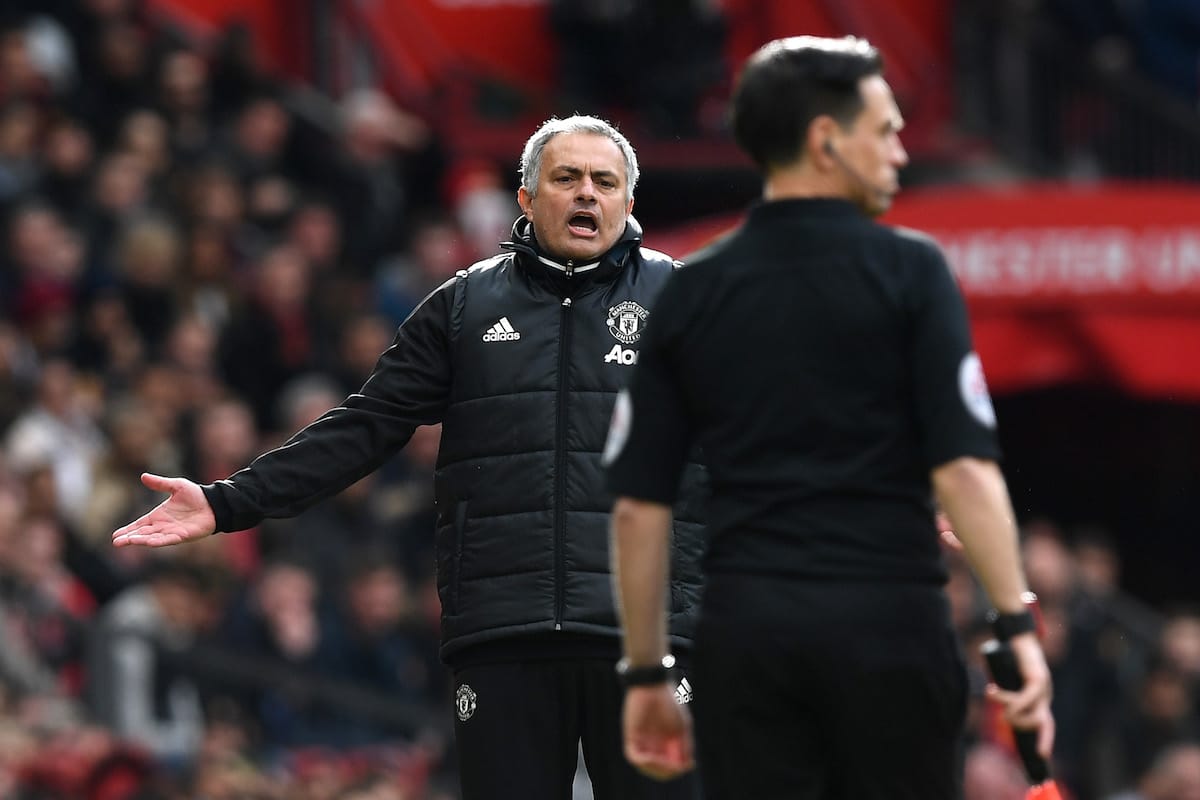 And so, as his record of one goal from ten away games against big-six rivals, Mourinho's system creates few opportunities. The evidence of results from this period seems to suggest that, while he styles himself as a pragmatist, a master of finding the easiest route to a positive outcome, maybe the United boss is now dogmatically wedded to an idea that is letting him down time and again.

The basic premise of his tactical plan is to prioritise defence, staying tight and organised at the back to limit the opponent's chances of scoring, while pouncing when the opportunity arises to take advantage of the chances that are conjured at the other end. But Mourinho's sides are consistently conceding clearer chances than they are able to create in these games.

In this period of ten matches (away to Arsenal, City and Tottenham with Chelsea, and away to Chelsea twice, Liverpool twice, and Arsenal, City and Spurs once with United) Mourinho's teams have conceded 12 goals and, as discussed, scored only once, collecting five points from a possible 30.

When analysing the expected goals (xG) stats for these games, courtesy of Understat.com, United (and Chelsea towards then end of his last spell at Stamford Bridge) lack creativity away to the top six, and concede a higher quality of chance than they create – by some margin, too.

By using historical data of hundreds of thousands of shots and their outcomes, xG applies a probability score to every shot taken; the higher the number, the greater the likelihood of a shot from the given position leading to a goal. As such, it is then possible to determine the general quality of chances a club is both creating and conceding.

In these ten games, Mourinho's sides have conceded chances with a cumulative xG of 14.47, and created just 5.95. Only once have they outperformed their opposition in this metric, creating 0.54 xG versus Liverpool‘s 0.27 in December 2016, and there are only two further occasions where Mourinho's side has been within one xG of their opposition – in April 2015 for Chelsea against Arsenal (0.85 to 1.07), and the Blues versus Spurs in November of the same year (0.28 to 0.33). All three games, coincidentally, ended 0-0.

There has also only been one occasion where Mourinho's team created greater than an xG of one in a single game, while only twice have they given up less than one xG.

Although the cumulative figure of 5.95 xG perhaps shows that Mourinho's sides have been unfortunate not to have scored more than once in these ten games, the fact that they have only once outscored their opponent's in this metric, and only twice been with touching distance, demonstrates that it would be wrong to suggest that any more than the five points accumulated has been deserved.

Ever since his time in charge of Porto in the early-2000s, Mourinho has managed if not the richest, then at least one of the three richest club's in each respective division. Yet still he sees fit to cede control of key encounters in favour of waiting for the opposition to slip up, seemingly not trusting the talent at his disposal – even while in charge of Real Madrid – to avoid making basic errors.

As the sides at the top end of the Premier League grow wealthier, acquire a higher standard of player and foster a greater degree of organisation, the mistakes Mourinho's blueprint relies upon are becoming increasingly rare. Maybe it's time for a change of plan.