Going into the final weeks of the season, everyone was rooting for West Bromwich Albion to win.

That, to put it mildly, is not something that usually happens, but the hope that Darren Moore could pull off the impossible captured everyone’s imagination.

Interestingly, Moore (green) took West Brom back to a style almost exactly in line with what Tony Pulis (yellow) was offering. 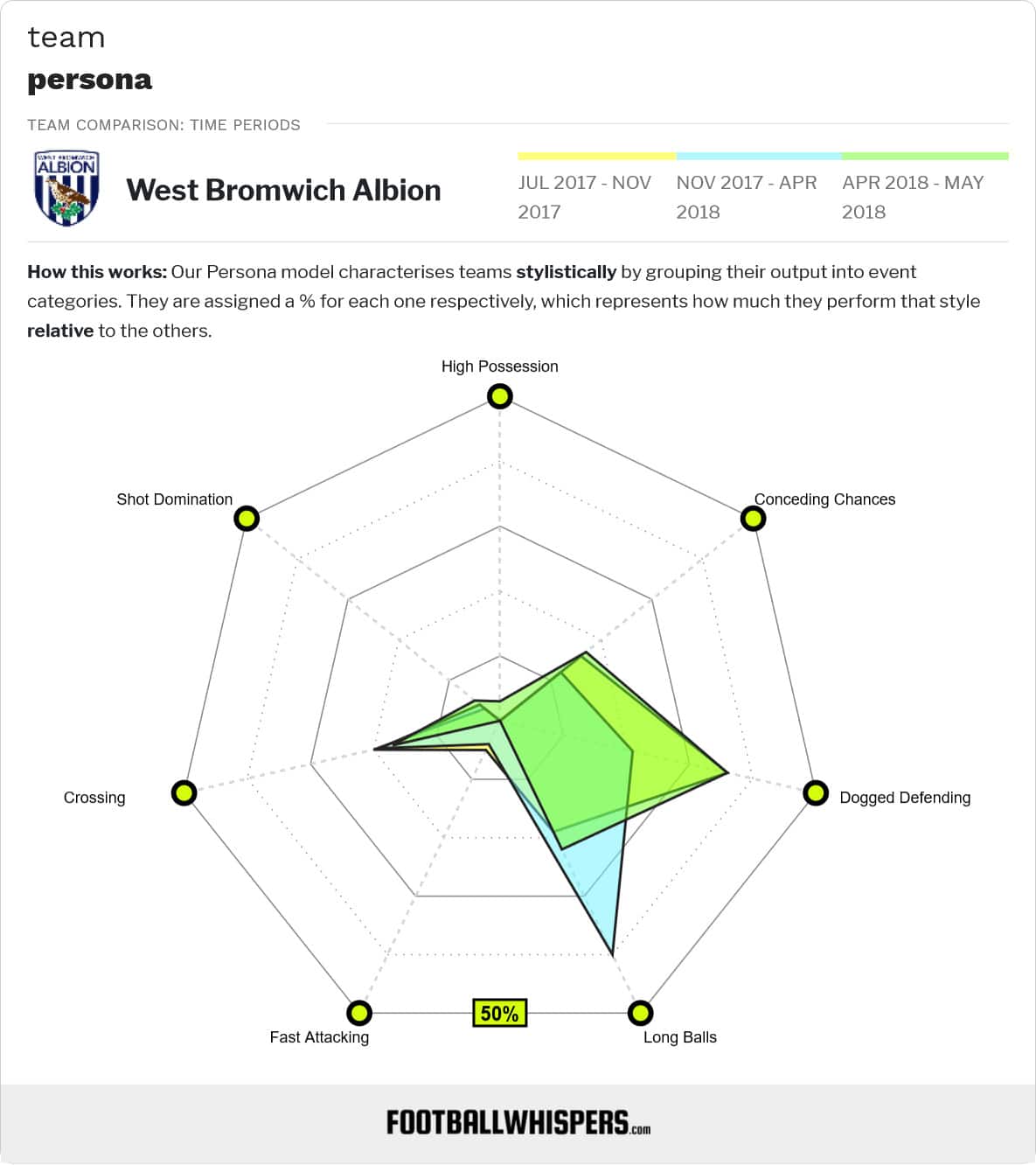 Alan Pardew’s stint in charge (blue) appears to have made long ball football a bigger part of West Brom’s game. This could have been intentional, it could also have been a result of failing to execute the intended plans and resorting to long balls instead.

Moore’s side also appears to have sat back in a manner similar to Pulis’ after Pardew had got the side defending a little higher up the pitch.

When West Brom won possession under Pulis, 57 per cent of the time it was in their defensive third and 36 per cent in the middle third. Under Pardew, this particular split was 53/40 (with no improvement in the quality of chances they conceded).

In Moore’s short time in charge, this split shifted back to 60/33 and made the defence more compact.

This compactness of the defence can also be seen in the Expected Goal (xG) values that the team was conceding under each coach.

Normal xG models don’t take into account the placement of a shot – they’re just interested in the quality of a chance at the point a shot is struck. That way, even if strikers fluff their chances, the team is still credited with producing a decent crack at goal.

‘Post-shot’ xG models do take into account shot placement, and there is a theory that the difference between the two on a team level may be a signal of defensive pressure.

Under Pulis and Moore, they conceded less xG in the post-shot model than the normal one, suggesting that the opponent strikers were regularly being squeezed out.

Under Pardew, the reverse took place, which might mean that opponent strikers had a bit more space when they took a shot. 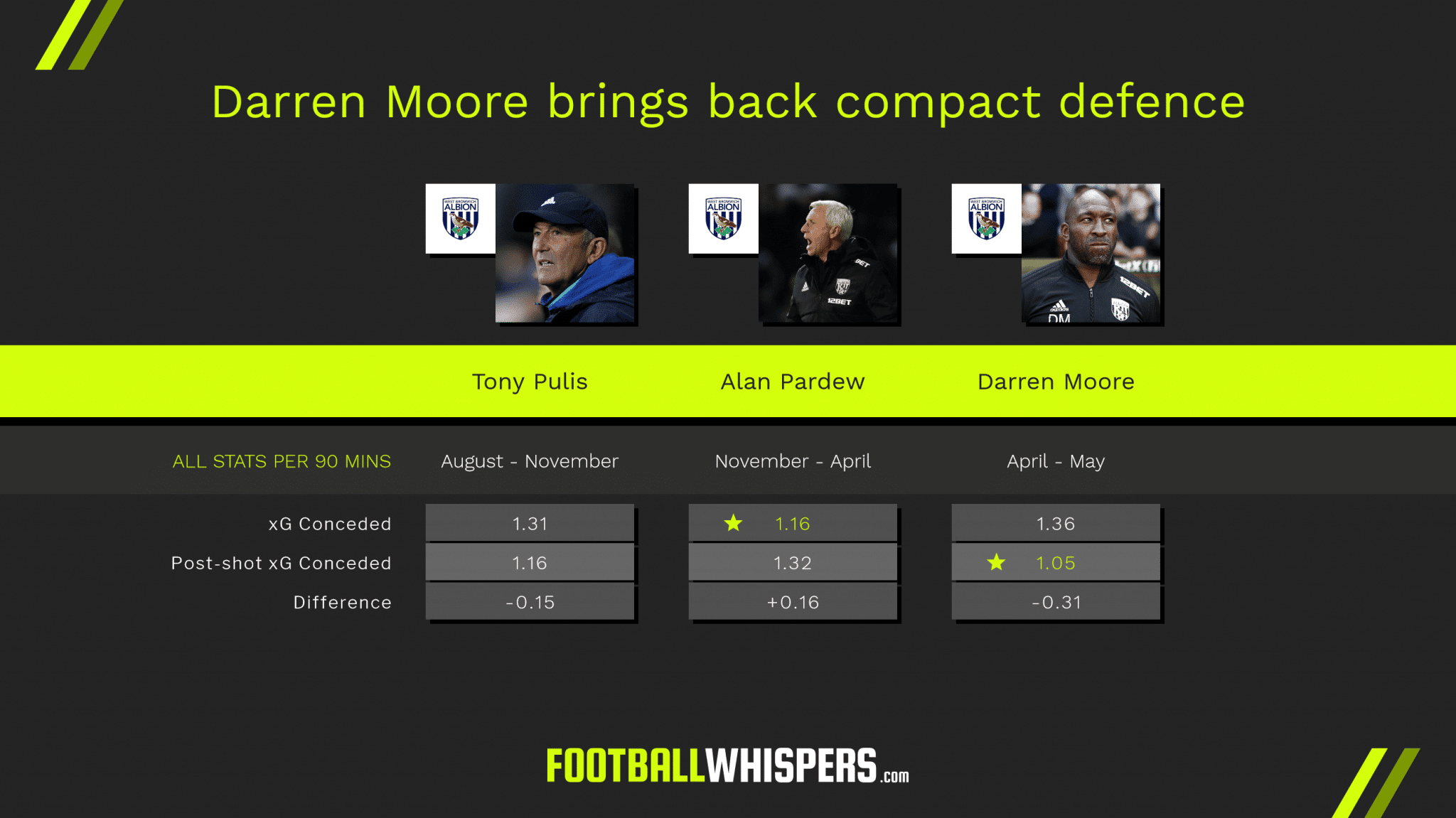 A little bit of luck, perhaps…

Still, Moore’s side was still a little lucky in a way that neither of his predecessors were.

Overall, Pulis’ side under-performed their xG90 by 0.24, adding up to nearly three goals over the course of his twelve league games. It’s not necessarily a lot, but at the bottom of the table those few goals could have made a difference.

For Pardew, it was 0.52 xG90 that they under-performed by, making up nearly nine goals that the former-Crystal Palace manager might have felt aggrieved not to get.

Meanwhile, Moore over-performed by 0.34xG90, just over two goals in total. Given that the tremendous run at the end of the season featured three 1-0 victories, the absence of these two goals could have completely changed the tone of Moore’s brief tenure.

What does the future hold?

Now that Moore has been made the permanent manager of West Brom the obvious question to ask is: what will his team look like next year? How will they play?

There’s also little indication that Moore’s preferred style of play is the Pulis-mould that he showed in his stretch of games in charge at the end of 2017/18.

Perhaps he was just reverting back to what the Welshman had done when he was manager because that was what the players knew best. “In the past two games, we've shown we actually know what we're doing when we go out on the pitch,” James McClean said after Moore’s second game on the touch-line, the win against Manchester United.

They may have got a bit of luck here and there, but the story of West Brom’s close shave with another Great Escape was going back to what they knew.