After Manchester United, the Toffees failed to replace him with a compatible No.9 in the summer.

The Merseyside club may have spent £142million, but Ronald Koeman was handed only £5.4million to sign Sandro Ramírez from Spanish side Málaga – the rest of the transfer kitty was mostly lumped on midfielders.

Come the winter and the Dutch boss was gone, Sam Allardyce entered the hot seat and, to rectify the club's misgivings, both Theo Walcott and Cenk Tosun arrived for a combined fee of £47million.

In the Turkish league, the 26-year-old forward had found the net eight times in 16 games this term, which made up part of his 64 goals in 142 matches for Besiktas.

“Scoring goals has been the club’s biggest area of concern,” Allardyce told BBC Sport when asked about Tosun’s pending arrival.

“Hopefully he will come to the club and show he’s good value for money. If we get the transfer done and he is successful by scoring goals for us, it would be an exceptionally good deal we’ve done. But it’ll be down to him to prove us all right.”

Signed on January 5, the Turkish forward wasn’t part of the squad which lost to Liverpool in the FA Cup, but he would make his debut against Tottenham Hotspur eight days later.

In two starts, the striker showed some good touches, but, in Big Sam’s defensive set-up, shots on goal were few and far between, with even fewer finding the target.

Sent to the bench, the new signing would only appear on the pitch for 45 minutes over the next four league fixtures.

“He is struggling with the pace of the Premier League which happens to more players than it doesn't who come in in January,” the Toffees’ coach told press after he left Tosun on the bench for the 3-1 home win over Crystal Palace.

“When it is chucking it down with rain, it is not that he is not used to it, he is, but it's freezing.

“There is no doubting his goal-scoring ability but you have to have the capabilities to get in those positions to score those goals and that is the hard bit.

“It is not unusual to see a centre-forward struggle when they first come we have seen many, many over the years do that.”

On the face of it, Allardyce’s reasoning seemed sound. Yet, when Everton were 3-0 up at home to the Eagles, with 14 minutes to go, he decided to bring on Morgan Schneiderlin for Idrissa Gueye, rather than hand his big-money striker, who needs to get to grips with the football in a new country, vital minutes on the pitch.

After Everton’s warm weather training in Dubai, Tosun made a substitute appearance against Watford before being handed his third Premier League start against Burnley on March 3.

When you are looking to end any sort of goal drought, you need something to go your way – a lucky break, a deflection, anything.

With the game tied 0-0, Walcott played in a cross from the right flank. Originally, it wouldn’t have had enough on it to reach the Turkey international, but a backward flick from Seamus Coleman carried the ball straight into his path and Tosun headed perfectly past Nick Pope.

It showed good awareness, excellent positioning and the ability to generate power on the header.

Although they would collapse and lose at Turf Moor, the 26-year-old earned another start and he would deliver again. 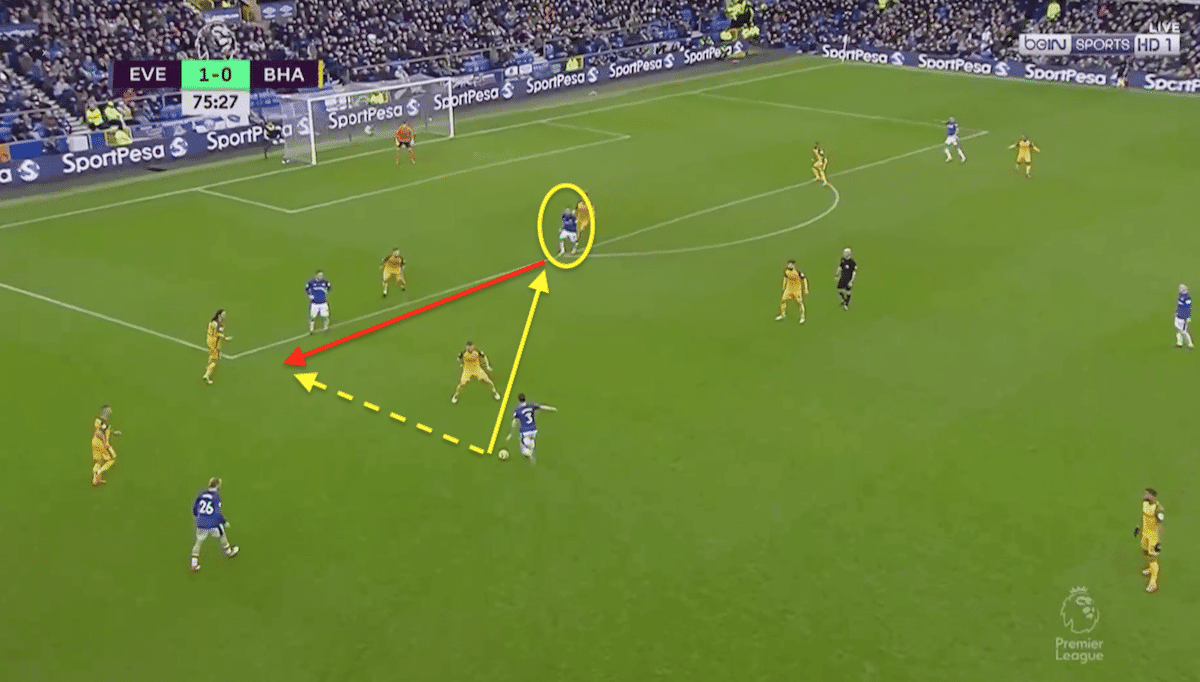 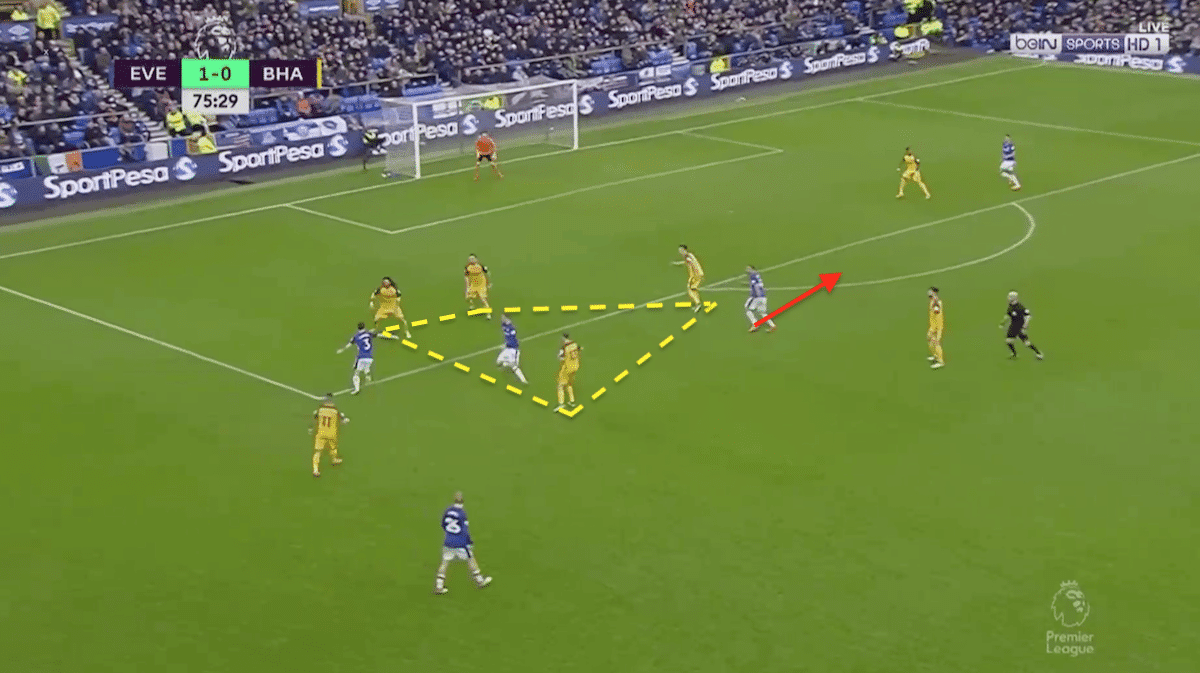 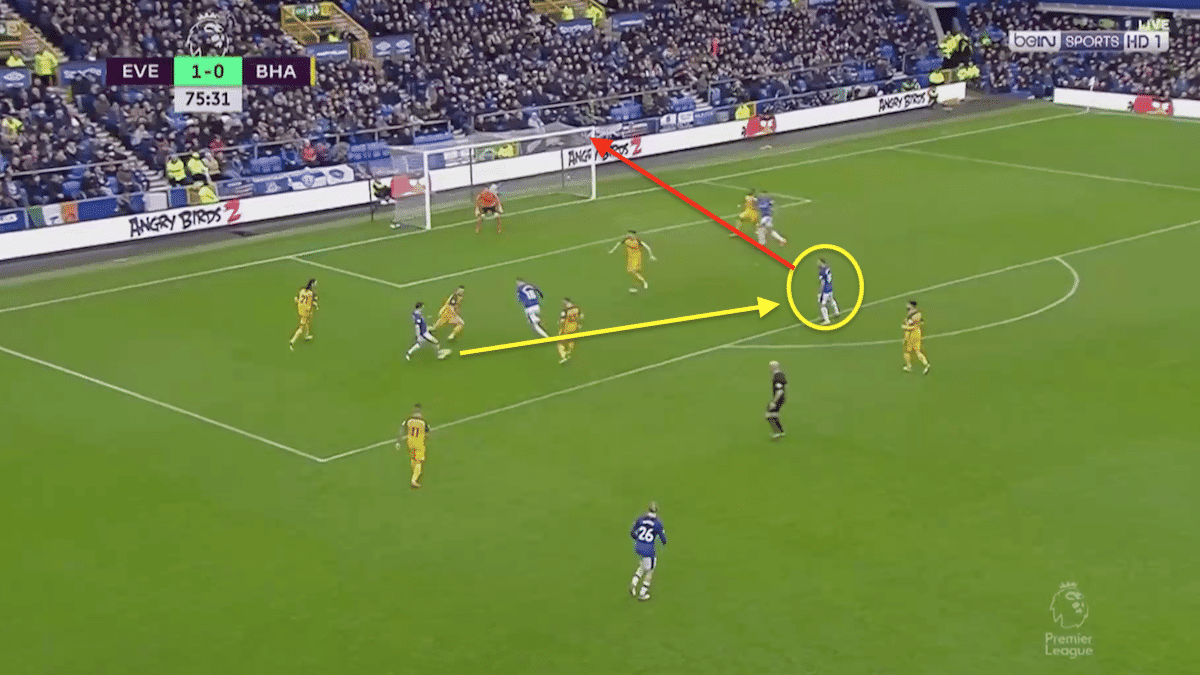 From the images above, you can see what Tosun offers as the centre-forward. Giving Leighton Baines an option to pick out with a pass, he has the touch and awareness to deliver the ball straight back to the left-back.

Then, with the defence drawn towards the ball, the forward pulls away from the centre-backs, creating loads of space on the edge of the box.

Baines finds him and their January signing smashes home his first goal at Goodison Park. Putting his side up 2-0 this time, the Toffees managed to hold on for the victory.

There was little doubt who Allardyce would start for the tough away fixture against Stoke City at the weekend, and Tosun didn’t disappoint.

The former Besiktas forward would score twice as Everton beat the Potters 2-1, picking up another crucial three points in the league, taking them up to ninth and, most importantly, 12 points clear of the relegation zone.

His first required some luck. After his initial shot saved, and Dominic Calvert-Lewin’s follow up cleared off the line, the Turkish forward was standing in the right place at the right time to lash home with his second attempt – you make your own luck.

After Eric Maxim Choupo-Moting had equalised, Tosun would add to his excellent form, scoring the winner after good work on the right from Walcott. His cross picked out the Everton No.14 and, although Jack Butland should have done better, it was another header guided on target and another goal for the striker.

Allardyce, trying to gain favour from the situation, took full credit for the form of his once ‘struggling' attacker.

“I think his confidence is gained by us taking him out early doors when everyone was going: ‘Why aren't you playing him?'

“You know, it's the usual rubbish you get from outside the football club,” the Everton coach continued. “They say: “You pay all that money and don't play him, why not?” That's because they don't know. I do, they don't.

“We wanted to get him fitter, and more used to the players he was playing with. A lot of the training and extra training he's done, especially in Dubai, has paid dividends not only for us but for him and long may it continue.”

The reason why Everton fans booed Allardyce’s decision to not bring on Tosun when they were winning against Palace was because they could see there was a good player there and someone who, although not finding the back of the net, was adding to the team’s all-round performance. 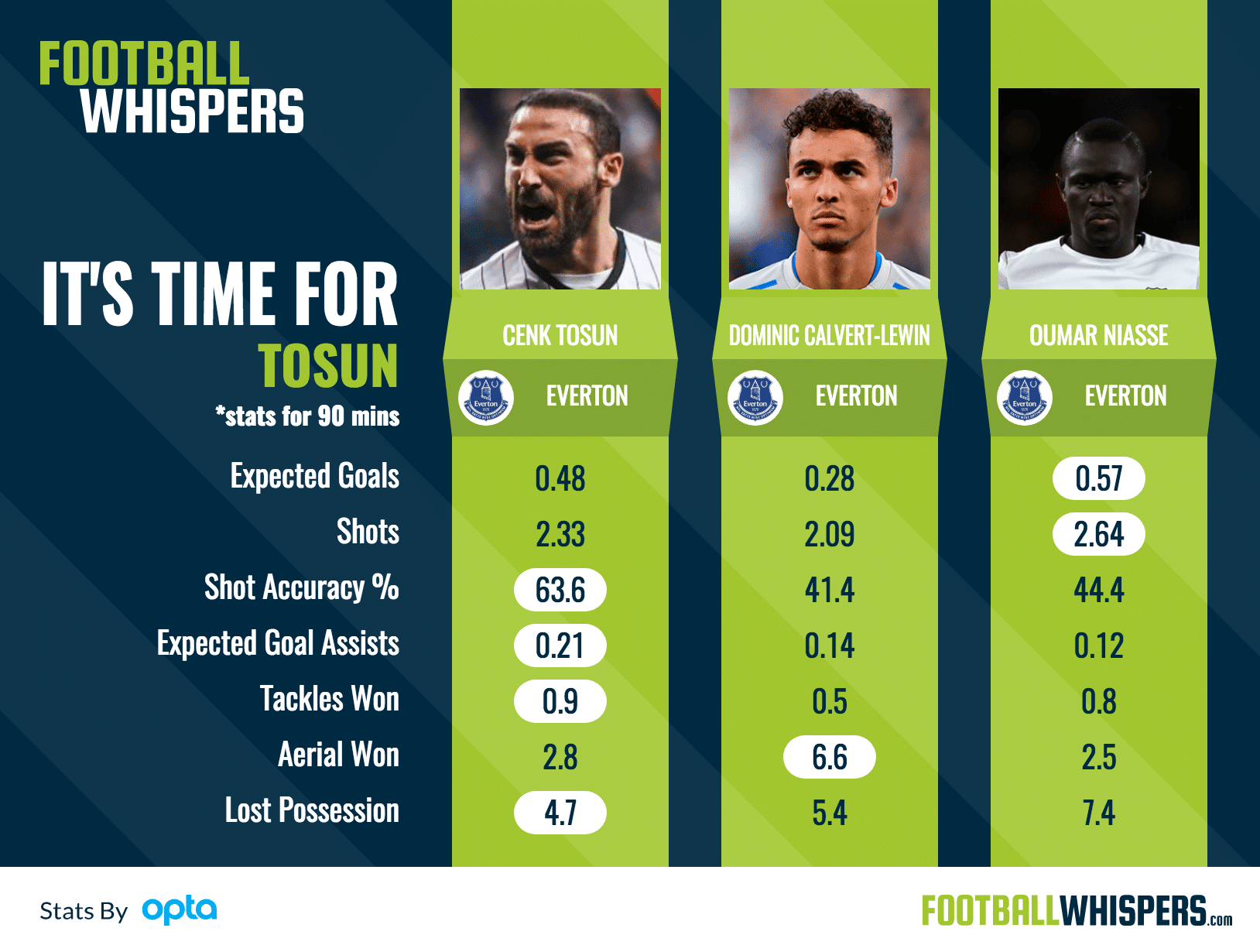 Although his expected goals is just below Oumar Niasse and he is averaging fewer shots per 90, he has played half the number of minutes as Senegalese forward. If Tosun continues to impress, you would expect him to overhaul the 27-year-old before the end of the season.

The Turkish striker also has a higher expected assists rate compared to his competition, so he’s helping to create chances too.

With more tackles won, fewer possessions lost and a higher shot accuracy, he almost ticks all the boxes you would expect Allardyce to look for. Even his return of 2.8 aerial battles won is more than enough to let him lead the line, especially when you factor in his movement and ability to score with his head.

Big Sam can point to the warm weather training, or the time spent individually with the forward in Dubai, but all the data highlights the fact Everton signed a player who was already a great talent.

Perhaps it was the former England coach who wasn’t ready for Tosun, rather than the 26-year-old not being ready for the Premier League.