Until this week, the January transfer window had been lacking a big random link which made everyone do a double-take. That all changed when reports emerged claiming Barcelona had bid £85million for Richarlison, and that Everton had rejected the offer immediately.

It is the latest in a seemingly long line of attempts by the Catalan giants to bolster their attacking options. Deprived of Luis Suárez’s services for the foreseeable future, the LaLiga champions are in desperate need of an attacker.

Pierre-Emerick Aubameyang's name had been mooted but Barça baulked at the price tag Arsenal slapped on the 30-year-old. Rodrigo Moreno topped the wishlist but Valencia were unmoved in their stance. A last-minute attempt to hijack the Bruno Fernandes to Manchester United deal failed and this is when Barcelona turned their attention, once again, the way of Richarlison.

The LaLiga giants have a long-standing interest in the Brazilian with Eric Abidal, the club’s sporting director, a big fan of the 22-year-old.

Sky Sports News claim Barcelona made an enquiry in the summer before their failed attempt to bring Neymar back to the Camp Nou. They then go on to state Abidal feels as though Richarlison could play alongside Suarez, as well as in place of him.

The Brazil international has shown his versatility since moving to Goodison Park. He’s operated as a wide forward, he’s led the line and he’s played as part of a two in attack. He shares similarities with the Uruguayan marksman but he’s nowhere near as prolific. And this is where it becomes tricky to really pin down just how valuable he is. 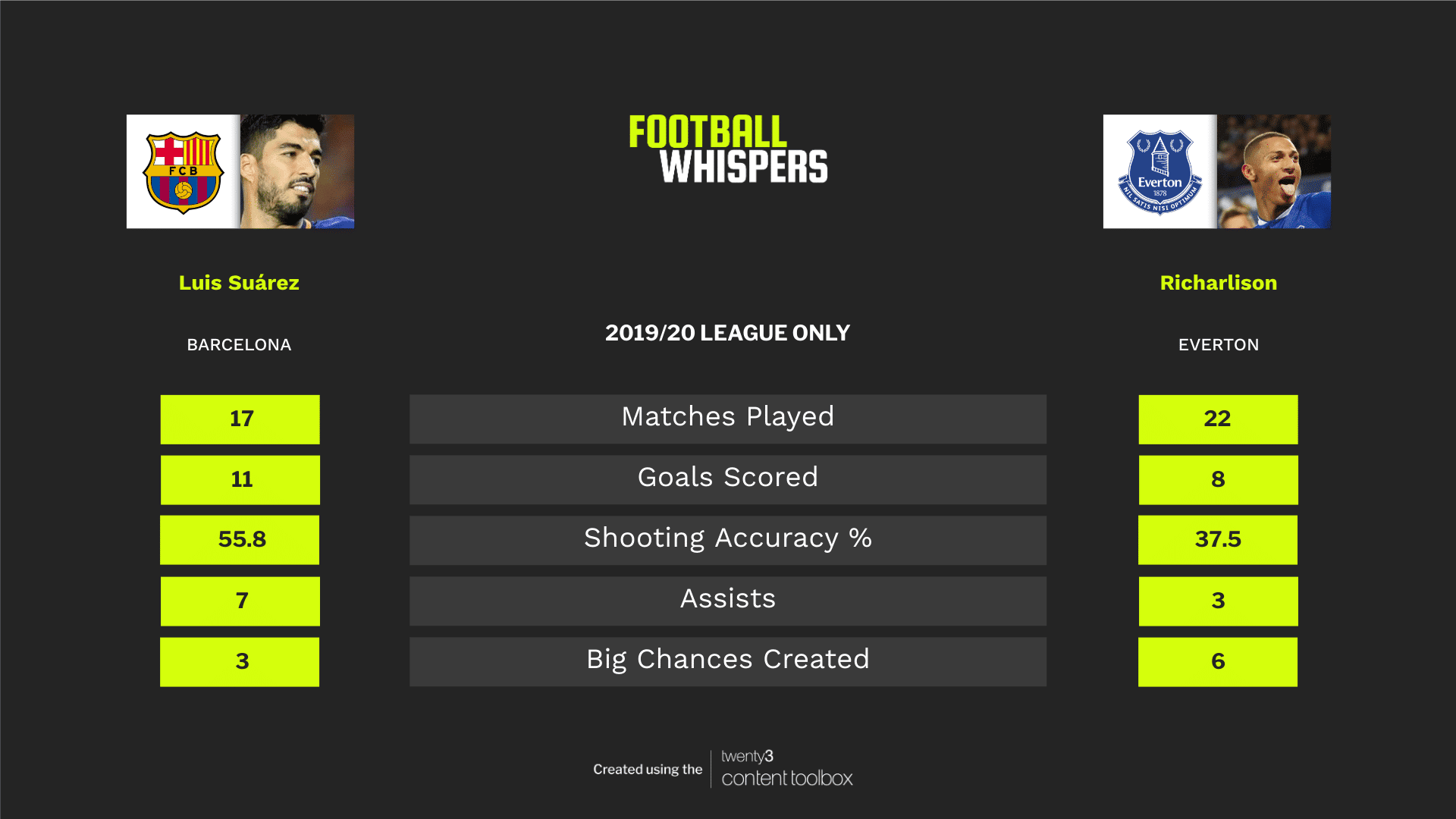 Everton parted with £35million to sign him from having signed a new deal in December, the Toffees are in a position of power.

They’re in no rush to sell and nor do they need to. But are they ever going to get a better offer? His departure could help finance a Carlo Ancelotti rebuild.

He’s still only 22 so time is on his side. But players who move for mega-money are prolific goalscorers. Richarlison has 21 in 57 since the switch to Merseyside. It's by no means a bad record, but the best in the league tend to better that in a single campaign. That is what he’s up against.

Richarlison's record of 0.38 goals per 90 is measured against an expected goals average of 0.27. He’s adding value to his efforts, a big positive, but he isn’t getting into high-quality positions on a regular basis, and that will be a concern.

Over the course of a 38-game season, Richarlison would be expected to score ten goals using his average for this season. He’ll better that figure but, even when outperforming his underlying numbers, his goal return isn't spectacular.

Of course, those numbers are reliant on the team he’s playing in. If Everton are underperforming, which they have been, then it is tricky to show the world exactly what you can do. Yet others have impressed in struggling sides and there hasn’t been much evidence to suggest Richarlison could perform to a higher level in a better team.

That's not to say the former Fluminense attacker hasn’t been heavily involved for the Toffees. He’s averaging close to three shots per 90, taking more than five touches in the penalty area with 13 of his 24 attempted passes are coming in the final third. The Brazilian forward isn’t being starved of service.

Everton and Barcelona both rubbished the claims of a bid. But new reports claim the Blaugrana could return with a second offer for the Toffees' No.7. It could be too good to turn down, in more than one sense.