It says much about the current inflated state of the transfer market, and the dearth of English defenders, that Swansea City defender Alfie Mawson, just 49 games into his Premier League career, is a £25million Watford, Everton and West Ham United transfer target.

According to Sky Sports News, he former England Under-21 international is on the radar of all three clubs despite playing fewer than 50 top-flight games. If he leaves the Liberty Stadium the fee he will command will be within touching distance of, if not greater than, the £30million Manchester United paid for Rio Ferdinand in 2002.

With 18 months left on his contract in South Wales, Mawson is in demand. Speaking about speculation surrounding his future, the 23-year-old told Sky Sports: “Whatever happens, happens. If offers come in then that is nothing to do with me. All I can do is affect my performances. I'm a Swansea player and I want to do well here.

“It is flattering to hear certain things but I have got to do what I can for this club. I'm contracted for another two-and-a-half years after this, whether that is in the Championship or hopefully in the Premier League, I am signed to be here so that's all it is at the moment, it's just talk.”

So why is he in such demand?

Who is Alfie Mawson?

As recently as 2013, Mawson was playing in the National League South for Maidenhead United in front of a couple of thousand people – on a good day – a world away from talk of a £25million transfer to one of England's big clubs. It's safe to say it has been a whirlwind four years for the defender.

Born in Hillingdon, north-west London, Mawson moved to Brentford from first club Reading in 2010. It was the Bees who loaned their young defender out to Maidenhead not once, but three times.

It was a memorable season as the Chairboys reached the League Two play-off final where they were beaten, on penalties, by Southend United. By now the secret was out. Mawson had been one of the division's most impressive young defenders and Barnsley came calling, signing a three-year deal after his Brentford contract expired.

Another promotion followed as the Tykes went from relegation candidates to play-off winners and, after just four Championship games, Swansea took a punt and splashed £5.5million on a player who had just 360 minutes of second-tier football to his name.

It proved a shrewd decision and, after serving his time in the Swans' Under-23 side, Mawson was brought into the first team by Bob Bradley. The American's 11-game reign at the Liberty Stadium won't be fondly remembered by Swans fans, but he did at least see Mawson's potential.

The defender has not looked back since, despite Swansea's struggles.

What are Alfie Mawson's main strengths?

There's a case to say Mawson would have been perfect for the Swansea of old. Composed on the ball and comfortable playing out of defence, similarities with Manchester City‘s John Stones have been drawn – and not spuriously.

The 23-year-old averages 47 passes per game which is the eighth-most of any centre-back to have played at least 15 Premier League fixtures this season. Only Nicolás Otamendi, César Azpilicueta, Laurent Koscielny, Jan Vertonghen, Nacho Monreal, Maya Yoshida and team-mate Federico Fernández manage more.

There are not all routine passes sideways and backwards, either. Mawson has the vision and technical ability to execute the kind of passes most defenders would avoid making at all costs.

In the images below, taken from Swansea's loss to Tottenham at the start of the month, he receives the ball from Sam Clucas on the edge of his box with former team-mate Fernando Llorente in pursuit. Instead of knocking the ball inside, he looks up, assesses his options and switches the ball out to the right-hand flank. 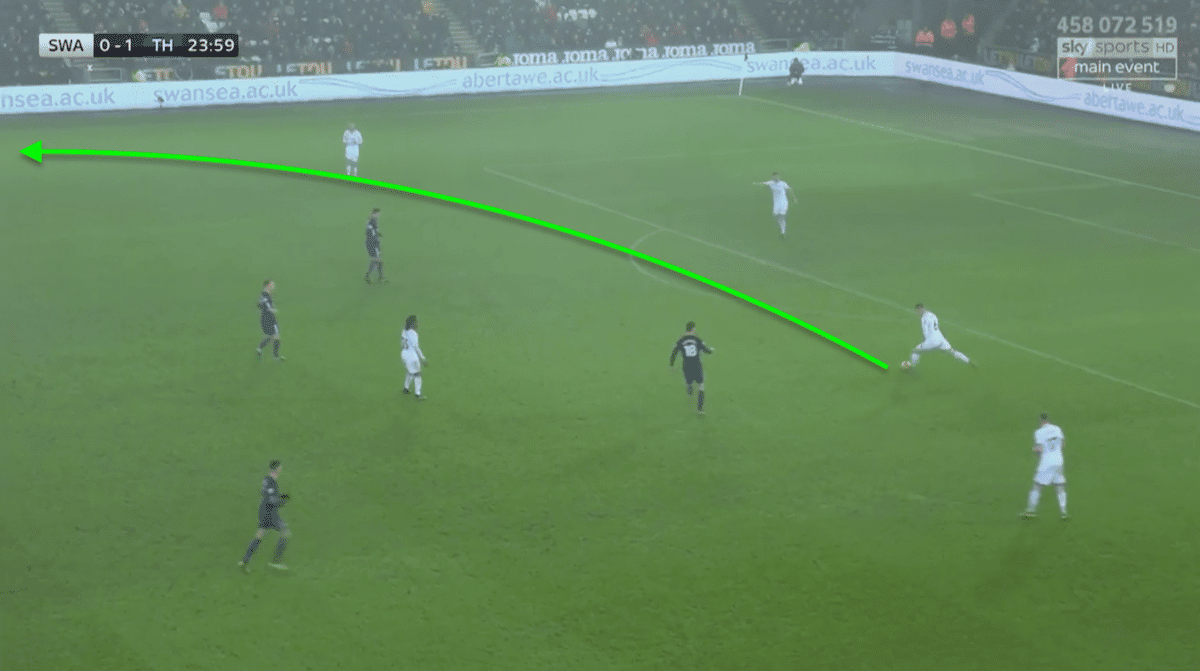 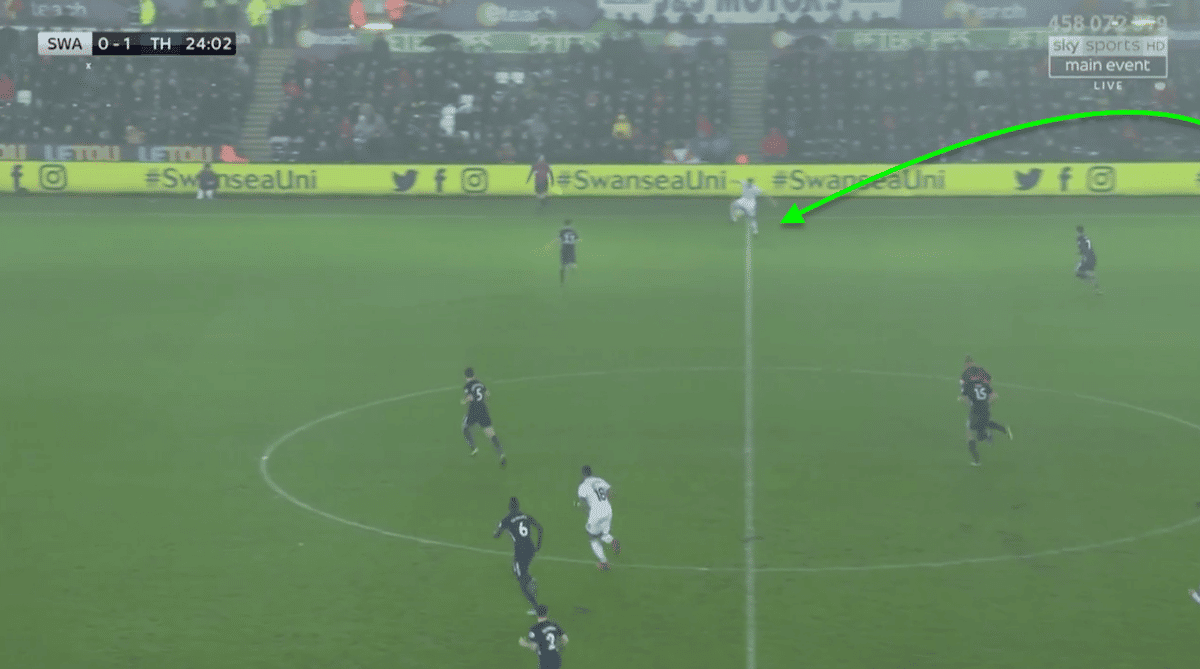 His pass completion rate of 83.7 per cent also sees him rank highly among his Swansea team-mates with Ki Sung-yueng, Roque Mesa, Clucas and Jordan Ayew the only regulars posting better figures this term.

He is similarly impressive in the air. He wins 3.2 aerial duels per game – only striker Wilfried Bony (3.5) has a better average for the Swans this term. That makes him a threat in both boxes, something which his return of four goals in just 27 starts last term was testament to.

Before that he bagged six for Barnsley en-route to promotion, as well as two in just four outings before joining the Swans, and netted seven in 48 starts for Wycombe.

What are Alfie Mawson's main weaknesses?

Like the aforementioned Stones, Mawson isn't without his faults. He is not helped by those around him, but he is prone to defensive lapses and has been caught out a few times in his fledgling career. Given his rapid rise and relative youth, that is to be expected.

The mistakes he makes – often a result of a lapse of concentration – are nothing which cannot be ironed out. In the two images below, taken from Swansea's loss at Stoke, Mawson is chasing a routine ball back towards his own goal. He has a head-start on Mame Biram Diouf and should either slide the ball back to his keeper or hook it clear.

Instead he does neither – almost certainly because he has faith in his ability on the ball – and tries to open up the field. In doing so he gives Diouf the moment he needs to stick a foot in and nick the ball. Luckily, Fernández comes to Mawson's rescue.

That is a fallibility which, with experience, can be eradicated. Being comfortable in possession and having the confidence to take your time on the ball is laudable. But there are occasions when taking the more agricultural option is best. 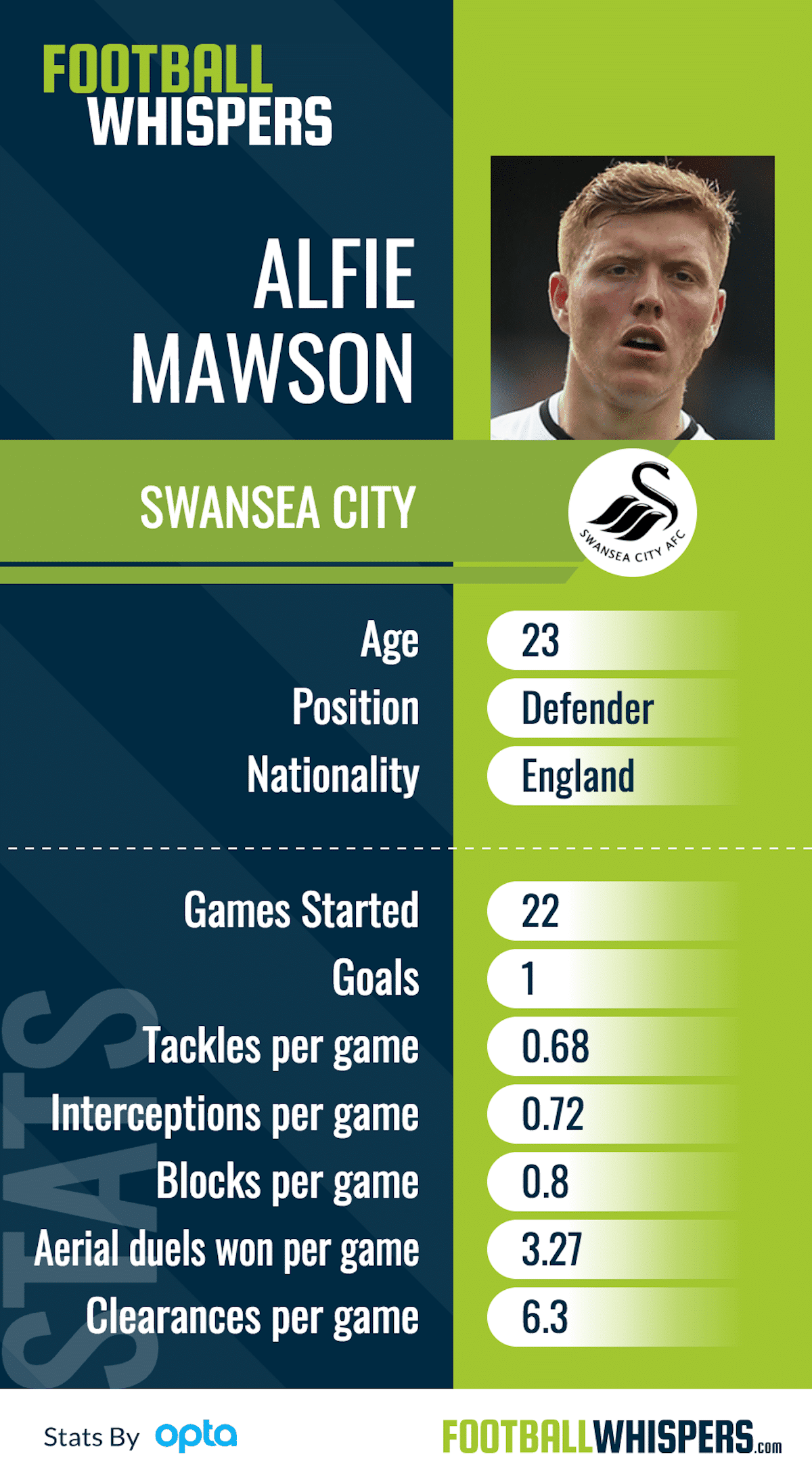 How much would Alfie Mawson cost?

A fee of £25million has been touted which, given Mawson's total of 49 Premier League starts, might seem a little high.

However, there are two factors which drive that price up. At 23, West Ham would be buying the defender they hope Mawson can become. He is an ex-England Under-21 international and it is plausible he will play for Gareth Southgate's senior side in the future. The Three Lions boss excluded Chris Smalling last year as he did not feel he was good enough in possession. That isn't something which can be levelled at Mawson.

On top of that, he would join as a homegrown player which is an extremely valuable criteria to meet.

Signing a defender from a struggling side to bolster a defence might not seem particularly ambitious. But the Swans, for all their faults, are only the joint-fifth leakiest team in the top flight. Furthermore, they are only facing 14.4 shots per game – fewer than four other sides.

Mawson is a big part of that. He has shown a maturity beyond his years since being installed into the Swansea side and if his current career trajectory is anything to go by, there is still development left in him. He has the tools to be a sturdy top-flight defender for years to come and his ability on the ball means he meet the demands of most.

Whether the Swans are relegated or not come May, Mawson will be in the Premier League next season.