The first competitive game for an English team in the 2017/18 season takes place in the Europa League, as Everton enter the competition on the third qualifying round.

Given their transfer activity so far this summer, it will be interesting to see how many new faces appear in the starting lineup in this opener, and if Wayne Rooney gets a start on his official homecoming.

Slovakian club MFK Ružomberok stand between Ronald Koeman’s side and a place in a play-off round which then determines who reaches the group stage of the tournament.

Ružomberok finished third in their league last season, and have had to play two ties in the competition already, seeing off Serbian side FK Vojvodina and Norwegians SK Brann.

Slovakian journalist Lukáš Vráblik spoke on the Everton website about the task they face, and judging by his comments it doesn’t seem like the opponents will cause too many problems for the Toffees.

“Finishing third last season was a great achievement for Ružomberok. However, they are not expected to repeat that feat again this season,” said Vráblik.

“They rely more on counter-attacks, but the defence can be prone to mistakes. They usually play in a 4-5-1 system with a lone striker who is physically well-built. They are in European competition after 11 years and they have never faced an opponent as big as Everton.

“I think Everton will progress over two legs. Ružomberok will try to make things difficult. If they avoided big losses and maybe get one draw out of two games, that would be considered to be a great result.”

It sounds like Everton could put out a youth side and still win the game, but they will have to be careful not to get complacent. Considering the amount of new players in the squad this might be the ideal opportunity for them to start to gel as a team in competitive matches.

As a result there may be a mixture of first team players, new signings, and a few young players either in the starting lineup or making appearances from the bench.

Kieran Dowell has impressed in pre-season so far and could be rewarded with a start, while in the other attacking positions Wayne Rooney could make his European bow for Everton alongside Spanish forward Sandro.

Mason Holgate and Cuco Martina will be fighting it out for the right-back spot, while Leighton Baines, Ashley Williams and Michael Keane are likely to make up the rest of the defence with new signing Jordan Pickford in goal.

Gareth Barry is still in and around the Everton squad, but the first choice defensive and box-to-box midfield combination at this moment in time should be Morgan Schneiderlin and Idrissa Gueye.

The third central position is likely to go to a more creative player, and Davy Klaassen could get the nod over Tom Davies.

While one or two positions are easy to predict, suggesting that the club still need reinforcements in this transfer window, Koeman has plenty of options in other areas of the pitch, especially in midfield.

Though the Dutchman dabbled with three at the back last season, it’s likely that he’ll go with a 4-3-3 formation in this game. The deep lying nature of Ružomberok’s 4-5-1 will mean that the full backs will be important when it comes to stretching the play in attack, and this could favour Martina or even Jonjoe Kenny over Holgate in the right full back role.

The lack of a target man in this current Everton side means that the passing along the ground will have to be crisp and accurate in order to work through a deep, packed defence. 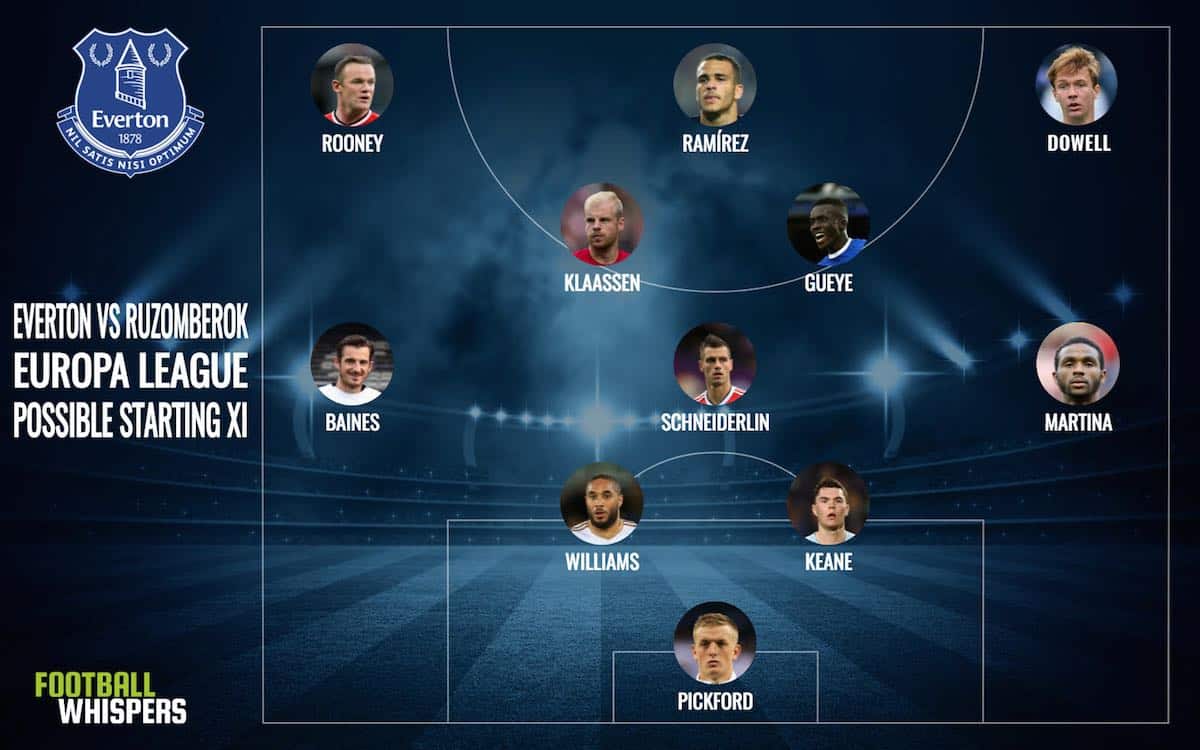 Seeing as their opponents are prone to defensive errors there could be the odd goal to be had from set pieces, so the delivery from Baines, and possibly Rooney too, from dead ball situations could be important.

Everton will be hoping to treat the away leg of this tie as another pre-season friendly, and could change their team considerably from this first leg. In order to build a healthy lead going into that second game they’ll have to put in a professional display at Goodison Park, and treat it as they plan to treat the games they hope to be playing in Europe throughout the rest of the season.

Despite the apparent weakness of the opposition, the return to competitive action could also serve as an indicator as to where work still needs to be done in the transfer market this summer.

It could also highlight which players aren't in Koeman's plans, giving hints as to who might exit the club, along with Ross Barkley, soon.

An alternative at left full back, and a more physical target man striker seem to be the obvious gaps at the moment, but the club seem intent on adding yet another midfielder in the shape of Gylfi Sigurdsson.

The post-match press conference could be one of interest if the manager is asked about the plans for the rest of the transfer window, and this exchange with the press after the game could be more of a challenge than the game itself.