Following disappointing results against Aston Villa and QPR, this feels like a must-win Premier League game for Everton and Rafa Benitez as they play host to bottom of the table, Norwich, this weekend. The Toffees are plagued with injuries but Norwich look void of all confidence, so it will be interesting to see how this game pans out.

Here are our predictions for Everton vs Norwich

We're not expecting to see goals going in at both ends of the pitch at Goodison Park as only one team has found the back of the net in each of the last four meetings between Everton and Norwich. Injuries to Everton's two first-choice strikers and a lack of match fitness from Rondon means that the hosts won't carry as much of a goal threat as they usually do this weekend. Only one player has scored for Norwich this season, Pukki, and goalscoring has been a real issue for the visitors who have failed to find the back of the net in three of their last six matches in all competitions.

Under 2.5 goals have been produced in five of the last six encounters between Everton and Norwich in league and cup, and we're predicting another low-scoring affair on Saturday. Everton will be without Calvert-Lewin and Richarlison this weekend and new signing Rondon is way short on match fitness, so goals will be an issue for the home side this weekend, while Norwich have only scored two goals in their opening five league games this season.

In terms of a final scoreline, we're backing this game to end in a 0-0 draw. Norwich aren't a team that scores many goals and Everton will be without their two first-choice strikers on Saturday, which is why we can see this game petering into a goalless draw.

Can Norwich avoid their 6th straight defeat of the season against injury-hit Everton?

Everton traveled to Villa Park without a number of their first-team squad and eventually slipped to a 3-0 defeat. Strength in depth is clearly an issue for the Toffees this season after the club failed to bring in the number of new players they had hoped for in the summer transfer window. A defeat in the League Cup at QPR has added even more pressure onto the shoulders of Rafa and his players this weekend and a defeat could see the crowd turn on the Spanish manager.

Norwich are yet to get a single point on the board this season and were beaten 3-0 at home by Liverpool in the midweek League Cup ties. However, the Canaries claimed all 3pts on their last trip to Goodison Park and know that if they start well and get an early goal they could well get their first points of the campaign.

Everton: Richarlison, Pickford, Coleman, Gbamin, Delph and Calvert-Lewin all look set to miss this weekend's clash through injury, while Digne is being assessed after taking a knock to his left ankle in midweek.

Norwich: Placheta, Zimmermann and Byram have been ruled out of the trip to Merseyside, while Cantwell is also a doubt for personal reasons. 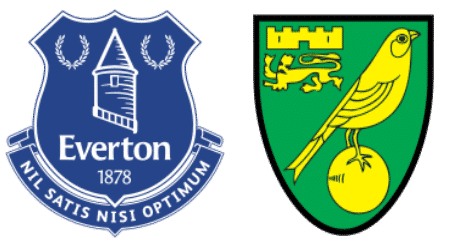