Newly appointed Everton manager Ronald Koeman wasted no time dipping into the transfer window upon his appointment in June.

The Merseyside club spent over £45m on Yannick Bolasie, Ashley Williams Idrissa Gueye and Maarten Stekelenburg as well as managing to keep Romelu Lukaku and Ross Barkley at the club despite interest from Champions League clubs. Their only significant loss being John Stones who made his way north up the M62 to join Manchester City in a deal reported to be worth £50m.

The nucleus of the team stayed together but Koeman's additions gave the starting XI a new backbone and so far this season the performances are a marked improvement on Roberto Martinez's final year at Goodison.

The club finished 11th in the 2015/16 season and their porous defence played a significant part in their disappointing finish. On average last season they conceded 1.44 goals per game, so far under Koeman that figure stands at 0.75.

While the defence has improved it's Everton's lack of goals that have prevented them from being higher up the table. In four of their seven Premier League games this season the Toffees have failed to score more than one goal taking just 5 points from these games.

With the help of our friends at Football Whispers, whose unique algorithm tracks the likelihood of deals being done, here are a few of names who are likely to be linked with a move to Goodison Park this January… 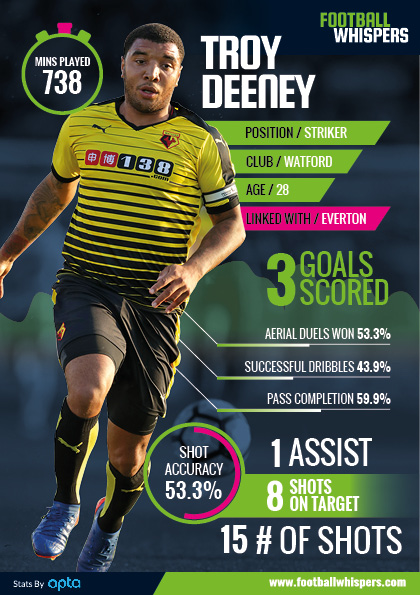 The 28-year-old, who only signed a new five-year deal with Watford in the summer, is said to be a favourite of Everton's director of football, Steve Walsh.

The ex-Leicester City scout tried to sign Deeney for the league Champions in the summer but the Foxes has a reported £25m offer turned down.

The report suggests Walsh will make another move for the forward Deeney in January and hopes to put Farhad Moshri's millions to good use.

Deeney has started the season well for Watford, following up on his successful 2015/16 season which saw him score 13 Premier League goals, and already has 3 goals to his name this term.

It is thought Deeney would be signed to supplement current Everton striker Romelu Lukaku but possibly replace him if the Belgian opts to move never summer in a search for European football.

Lukaku currently has 6 Premier League goals as well as an assist already. He's averaging 2 shots on target per game compared to Deeney's 1. Lukaku's shot accuracy stands at 76% which is substantially better than Deeney's 53.3%. The stats are similar when successful take-ons are compared – Lukaku with a 76% success rate and Deeney 43.9%. But Lukaku's weaknesses tend to be Deeney's strengths.

As many witnessed when he was the manager of Southampton, Koeman loves an aerially dominant target-man and the Englishman is the definition of that winning 48.5% of his aerial duels compared to Lukaku's 28.6%.

Deeney does a lot of his work off of the ball. He averages 1.2 tackles and Interceptions per 90 minutes whereas Lukaku comes in with just the 0.6.

According to the Sun Merseyside rivals Liverpool and Everton are battling it out to sign Lille's Soualiho Meite.

The midfielder, currently on loan at Belgian side S.V. Zulte Waregem, has caught the eye with a string of impressive performances and reports suggest parent club Lille are prepared to sell the talented 22-year-old for £6m just three years and 30 first-team appearances after signing him from Auxerre for £1.3m.

Everton are in the market for a midfielder despite signing Aston Villa's Idrissa Gueye in the summer with James McCarthy failing to impress and Gareth Barry coming to the end of his career.

Meite, who can play as a traditional box-to-box or as a holding midfielder, has been a revelation in Belgium as he helped his side take a surprise lead at the top of the table. He’s the prototypical modern day with midfielder with powerful running, the ability to not only spot a pass from deep but execute it with either foot, good positional sense which helps him shield the defence and pick up runners as well as being comfortable in retaining possession when pressed – a necessity in the Premier League.

If Koeman was looking for Gareth Barry’s long-term replacement then at just £6m Meite should be at the top of that list. His all action performances make him an ideal fit for the Premier League. 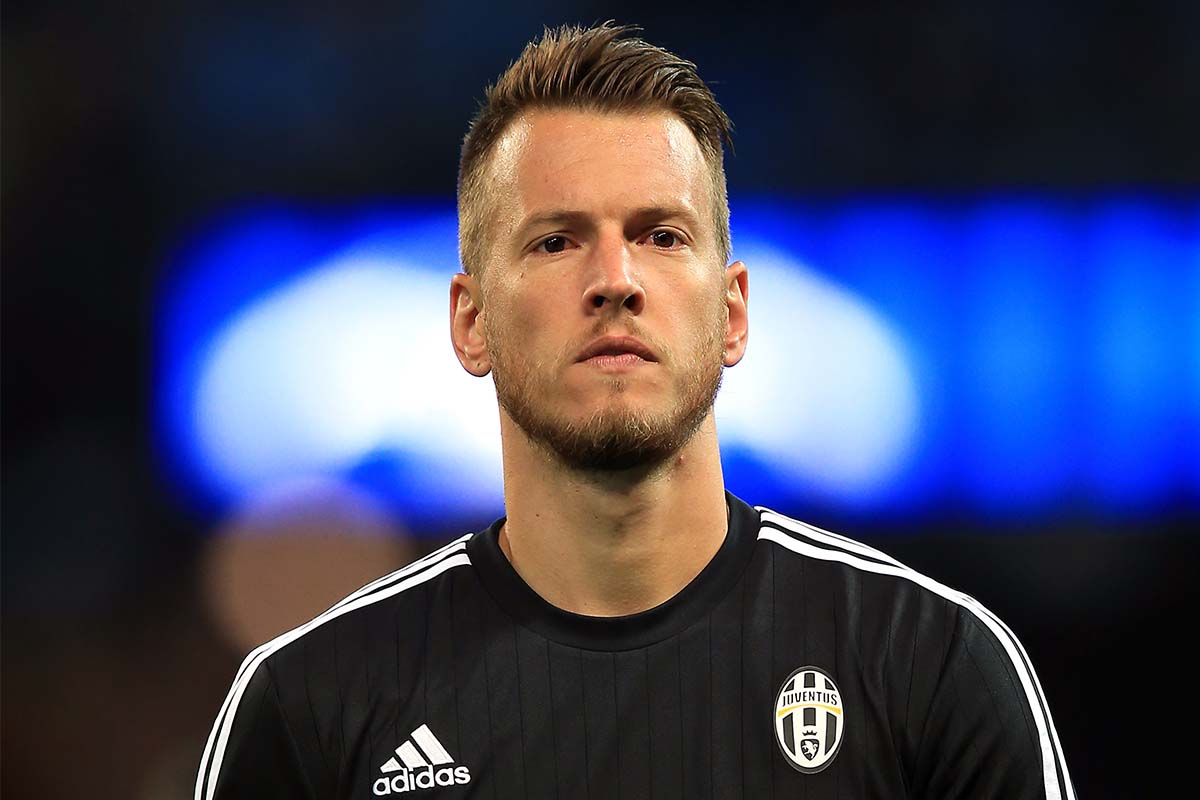 TalkSport report that Juventus goalkeeper Neto is ready to leave Turin in search of first-team football after failing to dislodge Italian legend Gigi Buffon between the sticks and that Everton are prepared to fight it out with Lazio for the Brazilian’s signature.

Maarten Stekenlenburg is the current number one after the departure of Tim Howard but at the age of 34 the Dutch ‘keeper can’t be seen as a viable long-term option. Everton are being proactive in planning for the future and 27-year-old Neto has been earmarked as a genuine possibility.

Before Neto’s move to Juventus in the summer of 2015 the Daily Mail reported that Neto was being courted by both Liverpool and French giants PSG. While the current Football Whispers Index rating stands at 1.1 a deal is unlikely to happen as soon as the window opens but keep an eye out to see if the likelihood increases.

Keep Up To Date With The latest Everton Transfer Rumours