Everton’s transfer business has stepped up a notch in the final days of the summer window. After the Toffees sealed the signing of  Juventus wonderkid Moise Kean, they have moved on to Crystal Palace’s wantaway star Wilfried Zaha.

Bringing the Ivory Coast international to Goodison Park would be a huge coup for Marco Silva – Zaha originally claimed he wanted to leave Selhurst Park to play Champions League football.

However, with Chelsea unable to sign players this summer and Arsenal, playing in the Europa League, unable to structure an acceptable deal for the Eagles, it’s presented Everton with a clear run at the former Manchester United winger.

While European football isn’t on the agenda at Goodison this term, Zaha is clearly convinced by the project being pieced together by Marcel Brands. Reports suggest he’s happy to make the move to Merseyside and all that is left to be decided is how Everton are going to pay for the 26-year-old.

The Merseyside club have quietly gone about their business this year, strengthening key areas of the team and adding depth where needed.

They’ve managed to retain the services of Lucas Digne and Richarlison while securing André Gomes to a permanent deal. And prior to Kean’s arrival, they replaced Idrissa Gueye with Jean-Philippe Gbamin.

Adding Zaha would give the Toffees an abundance of attacking talent, but it also gives Silva a bit of a selection headache.

It’ll be a welcomed one, though. 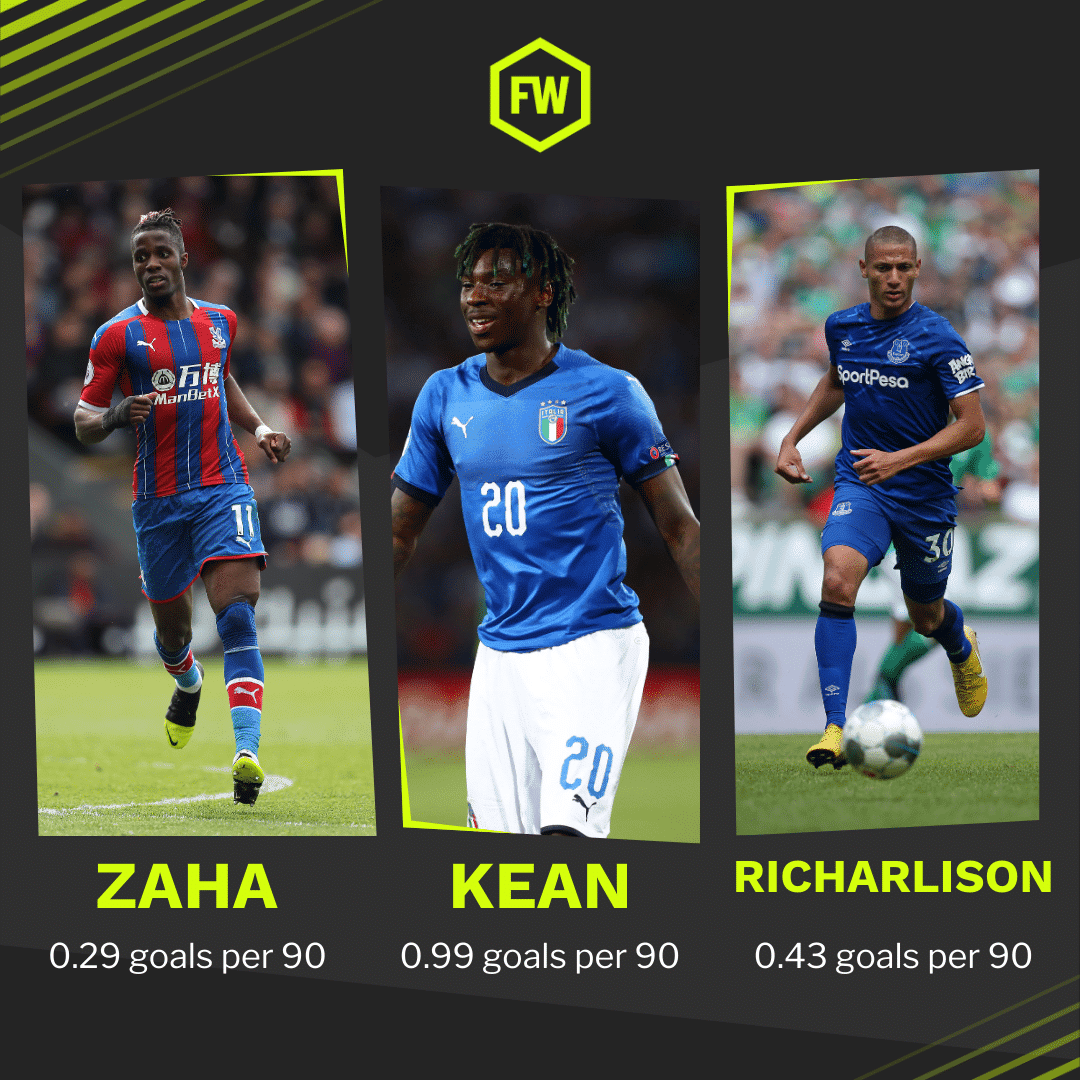 While Calvert-Lewin might not be first choice he has just been named the Toffees' new No.9. It's unlikely he'd take kindly to sitting on the bench for the majority of the season, but Silva can't bench one of Zaha, Kean or Richarlison given the trio cost the club close to £130million.

Gbamin is likely going to be deployed as the destroyer in midfield and he'll need to be partnered by defensively diligent players which then allow the attack to do what they're good at. Gomes was a favourite last season and Delph won't have swapped the Etihad for Goodison without a guarantee of regular football.

The conundrum Silva has to solve is clear.

However, his biggest puzzle might be how he gets the best out of Zaha and Richarlison. Both can be fitted into the starting XI, with Zaha in his favoured left-wing position and the Brazilian on the right, a position he started in many times last season.

The former Watford man started from the right side on eleven occasions last term and found the back of the net three times. He was far more prolific from the left, netting five in 11 starts, and also scored four times while playing as the centre forward.

When looking at Richarlison's data for the 2018/19 Premier League season, it is noticeable his output dropped when he was moved out of his left winger role. He completed fewer dribbles, had fewer shots and attempted fewer passes, and this is something Silva will have to consider when piecing together his team. 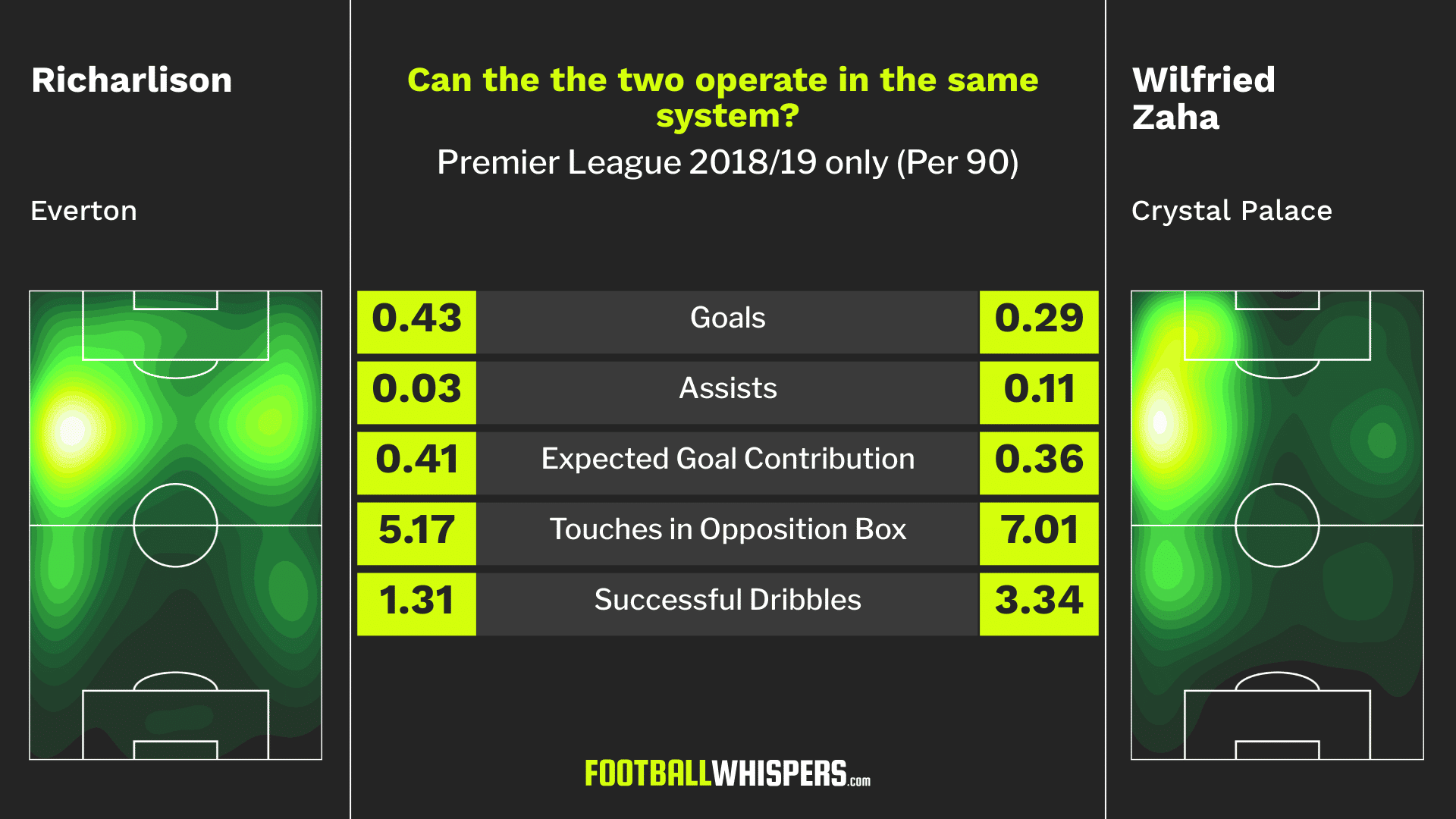 As shown in the heatmap above, Richarlison drifts to the left a lot more than he does the right, even when deployed centrally. Many right-footed forwards do this as it opens up the pitch and gives them space to create or threaten goal.

Simply the Brazilian would be limited on the right flank. Yes, he would be playing with better players and that in turn may see his averages rise. But capping what Richarlison can do in favour of giving the Crystal Palace man the freedom he needs could backfire.

There will be an adaption period for Zaha. The fleet-footed No.11 would need to transition to being a team player once again.

At Selhurst Park, Zaha is an individual. Roy Hodgson relies on him to create something from nothing. For some players that would be a problem but the versatile forward thrives in that environment and relishes the responsibility.

At Goodison he'd be expected to be involved in rehearsed attacking moves. He'd have to link with his team-mates, have to add a selflessness to his game in order to create space for others, and Zaha would need to add to the defensive side of his game.

For context, Richarlison currently wins possession back on 5.7 occasions per 90, close to two more than Zaha averaged last term. The Brazilian also averaged more tackles and more interceptions. Everton can't afford to carry Zaha; he would have to buy into what is expected of him and quickly.

It will be intriguing to see how Silva sets his team up if a £65million move for Zaha is completed.

It could be a spectacular forward line which, on paper, rivals anything a top-six team can put out. But the dynamic of the trio is what is going to be the most interesting part of this. Get it wrong and the goals are going to dry up.